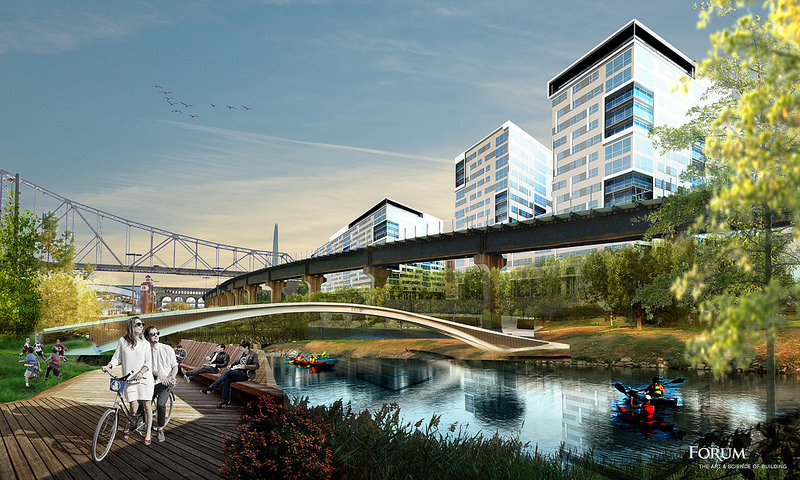 2015 was a big year for St. Louis and nextSTL. A building boom was manifested in cranes across the city’s central corridor skyline. Several big mixed-use and residential buildings broke ground in nearby central St. Louis County. The Rams and the north riverfront were news, of course. City residents showed up in big numbers to envision a greater Gravois. SSM purchased the Saint Louis University hospital and announced a $500M redevelopment. Vacant Crestwood Mall saw a proposal for a new future. The history and future of Mid-Century highway infrastructure made the news. More big proposals were made for projects we hope get off the ground in 2016. Finally, many St. Louisans responded to the Syrian crisis by inviting refugees to the city. Closing a city street should require a deliberate, open, public process. In an historic city, altering the street grid in place since the end of the American Civil War, 150 years ago this year, should require the most deliberate, most open, most public process. In fact, if it were up to us, the St. Louis street grid would be on the National Register of Historic Places, be a City Landmark, and require a hearing and vote by the city’s Preservation Board to alter.

Of course this isn’t how street closures are handled in the City of St. Louis. Some are closed at the behest of an Aldermen responding to an unknown arbitrary (small) number of constituents. Some have been more planned. There’s a long history of closing streets in this city. Now, the Missouri Department of Transportation, responsible for state routes through the city, is presenting a plan to near south side neighborhoods to close 16 streets along Gravois Avenue from Russell Boulevard to South Grand Boulevard. Today St. Louis attempted to put its best NFL foot forward in an attempt to keep the league in the city. Days after St. Louis Rams owner Stan Kroenke announced his intentions to build a stadium and move the team to Los Angeles, the two person team of Dave Peacock and Bob Blitz revealed plans for a stadium on the city’s north riverfront.

The plan to is to have a stadium ready for the 2020 NFL season. It is hoped than once the stadium is complete, an Major League Soccer (MLS) expansion team would use the facility. Cost estimates range from $860M-$985M. The proposal anticipates $400M total coming from the league and team ownership. The NFL’s G4 financing program matches team ownership contributions to a new stadium up to $200M. nextSTL has learned SSM Health’s early plans for its, soon to be, most recent acquisition call for the possible demolition of the existing Saint Louis University (SLU) Hospital. SSM recently reached a deal with SLU and Tenet Healthcare to purchase the hospital. The university is purchasing the hospital from Tenet, which has owned the facility since 1998. SLU will then contribute the hospital to SSM in exchange for a minority membership interest.

SLU will retain a financial interest and governance rights in SSM, and the healthcare company will own and operate the 356-bed teaching hospital. Additionally, SLU Hospital employees will become SSM employees. According to a press release the transaction between SSM Health and the university is expected to be finalized later this summer. It will be subject to regulatory approvals, and financial terms of the transaction will not be disclosed. It’s amazing the effort it requires to remake a retail monolith. The Crestwood Plaza mall has been vacant now for several years. Plans have come and gone. The city doesn’t want something too bland, or too urban. It’s been looking for something just right and it appears that Crestwood thinks they’ve found it.

Site owner and developer UrbanStreet has submitted a low-density, mixed-use redevelopment plan to the city, which it released today. Amazingly, UrbanStreet paid just $3.6M dollars for the 47-acre site, which had sold for $17.5M in 2008, and was assessed at $28.7M in 2006. The mid-20th Century was good to the Central West End. While St. Louis as a whole started bleeding residents to the suburbs post-World War II, the Central West End countered by building both modern high-rises and low slung single story buildings that thought of the car as much as the pedestrian. This construction boom of the mid 20th Century is best taken in along Lindell Boulevard.

This investment during the dawn of the city’s worst times paid off as it has added a fresh take on good architecture and design in the age of the automobile. I love the way the best of two eras compliment each other…sure the brick, wood and stone of the golden St. Louis age is hard to beat, but there is beauty in the mid-century structures as well. By now, the world has witnessed the images of dead Syrian children on European beaches. We’ve heard of the refrigerated truck full of refugees–the truck without ventilation. We’ve watched Hungarian police hunting people like animals. Millions of Syrians have been displaced. Hundreds of thousands make it to Europe each year. Many never make it. Cardinals Set to Flee St. Louis Without “Top Tier” Stadium Deal
As if the drama surrounding the possible departure of the St. Louis Rams National Football League team wasn’t enough, nextSTL has learned that the St. Louis Cardinals may relocate if funds are not found for a new “top tier” stadium.

Opened just a decade ago to much fanfare, Busch Stadium III is already seeing wear, and is considered by many to be outdated. The final construction cost of just $364M, a modest sum by today’s standards, ironically makes the stadium almost expendable. The $10M project will be funded by $7.5M from BJC Healthcare and $2.5M from On-System Bridge Program (BRM) and Surface Transportation Program (STP) federal funds. The transformation is part of the BJC and Washington University Medical Center Campus Renewal Program. This past November it was announced that Great Rivers Greenway would commission a six month study of the city’s near north riverfront, a largely industrial area dotted with vacant buildings and lots, but also home to the $500M Lumiere Casino and Four Seasons Hotel, The Landing, the new Bissinger’s Chocolate factory and event space, and adjacent to the $350M Arch grounds renovation.

While there’s plenty of space to work with, there’s been an incredible amount of investment in the area over the past few years. The remaining vacancy is a testament to just how much empty land there is. If a stadium were to incorporate the vision here, reduce surface parking, and be built alongside parks, apartments, and offices, we might be onto something. (GRG is soliciting feedback via this survey – open until 7/24) The Life and Death of the American Urban Interstate As Told By St. Louis’ I-755

Hidden in the downtown St. Louis landscape are subtle hints of a history that did not come to pass. Grandiose ramps leading to unassuming streets off of Interstates 64 and 44 are the only physical presence of another expressway which was never built. Route 755, or the North-South Distributor, as it would generally be known, was part of a massive arterial system for the City and one of the few parts that was not completed.

It would have connected the City’s four major Interstates and provided an expressway route across the center of the City. But on its rocky path to fruition, it encountered a furious swarm of complications that would ultimately keep it from ever seeing construction. Bull Moose and What Grand Center Could, Should, and Might Become

In February of 1962, Don Beattie, a mechanical engineer, founded Bull Moose Tube Company. The company began with one tube mill and was originally located on 1822 Cherry Street in Wellston, Missouri, a suburb of St. Louis. – This is the opening history of Bull Moose, which recently announced it will move 80 jobs from the outer-ring suburb of Chesterfield, MO to the City of St. Louis’ Grand Center arts district.

The Missouri Theatre building will soon be the new home of Bull Moose. The company plans to occupy 25,000 sf, sharing the building with a 145-room boutique hotel, restaurant, banquet rooms, coffee shop, bakery, and yogurt store, according to reports. The long-vacant large lot between Big Shark Bicycles and Gokul Indian Restaurant at 6103-6131 Delmar Boulevard could be developed as a 13-story, 200-unit apartment building within two years. The Yellow Cab Company building was demolished in 2006 by Josh and Neal Shapiro, owners of Original Cast Lighting. Plans to redevelop the site didn’t get off the ground due to the recession.

The Times of Skinker DeBaliviere profiled the plan in its April-May 2006 issue (image below). The Shapiros rehabbed their building across the street, which now hosts restaurant Tavolo V and offices for Prozess Technologie. The empty lot has languished as filling commercial spaces on the south side of Delmar to the east has proven difficult. There simply needs to be more people living nearby. In 2001 Indianapolis proposed that five central city neighborhoods be designated cultural districts. Taken together, they were home to nearly every significant arts, cultural, heritage, sports, and entertainment venue in the city. The problem? The neighborhoods were poorly connected and lacked an identity. The solution? The Indianapolis Cultural Trail.

Completed in 2012, the $63M 8-mile multi-use trail was funded by $27.5M in private and philanthropic support, and $35.5M from federal transportation grants. A recent study has found that since the project announcement and groundbreaking in 2007, property values within 500ft of the trail have increased by 148%, or more than $1 billion. Renderings for a new 500K sf administration building on the Washington University School of Medicine and BJC Healthcare campus in the city’s Central West End have been released. While a relatively straightforward structure, the investment immediately next to the district’s MetroLink light rail station is big step forward.

Back in 2012 we reported that the medical center would see more than $1B in investment over the coming decade (latest renderings here). Already complete is the new BJC headquarters and Center for Outpatient Health at Forest Park and Euclid Avenues. Nearly complete is the McKinley Research building, a new health and safety facility, and the massive 3,000 space parking garage and elevated walkway. The St. Louis College of Pharmacy has completed its new building on the prominent Taylor Avenue site.