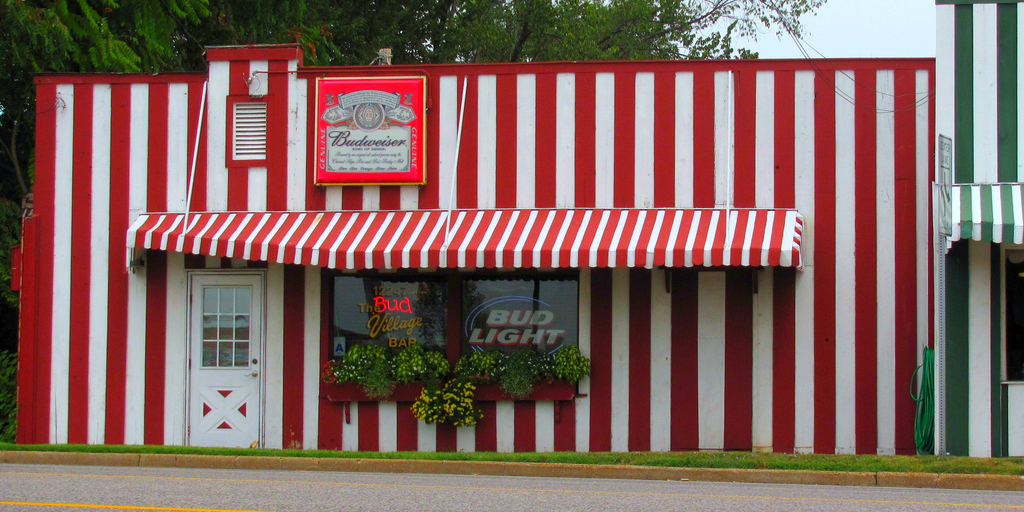 nextSTL has learned a landmark Des Peres business beloved by generations from throughout the area will likely shutter following resolution of a family probate dispute. The wood-frame structure from 1890 housing the Village Bar is expected to be demolished, making way for a new development. The bar borders Des Peres Park along the north side of Manchester Rd., just east of Ballas Rd. It is easily identifiable by its distinctive red-and-white striped exterior.

The commercial real estate division for Schnuck Markets Inc., DESCO Group, has the Village Bar property under contract. According to nextSTL sources DESCO will pay approximately $1.2 million for the 1-acre parcel. St. Louis County records appraise the value of the property at $650,000. The firm intends to develop an 8,000 sq. ft. retail center at the site. An ongoing case in St. Louis County Circuit Court has been holding up the sale.

According to Case.net on July 22, 2013 a temporary restraining order was sought by Village Bar owner Sam Harvey’s daughter from a previous marriage, Della K. Hosutt, against his wife Janet Harvey. On July 25, 2013 the parties consented to transfer the matter to probate court, where it now stands. In September of 2013 Sam Harvey passed away, and Janet Harvey became owner of the bar. The suit seeks to have Janet Harvey removed as trustee.

Two other businesses on the property will also be affected. The attached Custom Wig Shoppe, building built in 1900, and the adjoining Fun Flags Garden Décor & More. Additionally, a large barn built in 1910 and situated in the middle of the parking lot is also expected be razed. All dates are according to St. Louis County records. An attempt to reach Schnuck Markets Inc. for comment Monday was unsuccessful.

The Village Bar opened in 1948 in what was formerly a feed store. Harvey bought the bar in 1973 and added a kitchen soon after. The casual West County watering hole has earned a reputation for one of the top burgers in the area. It also draws a diverse and devoted crowd. “Save the Village Bar” has more than 6,000 Facebook likes. Early Monday morning the fan page ominously posted a photo taken immediately outside the bar, “survey sticks and utility locating…not looking good for the Villagio.”