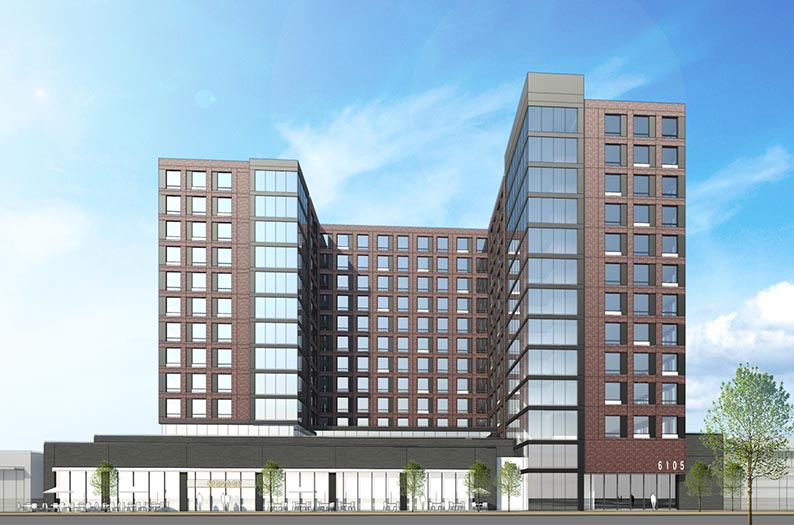 The long-vacant large lot between Big Shark Bicycles and Gokul Indian Restaurant at 6103-6131 Delmar Boulevard could be developed as a 13-story, 200-unit apartment building within two years. The Yellow Cab Company building was demolished in 2006 by Josh and Neal Shapiro, owners of Original Cast Lighting. Plans to redevelop the site didn’t get off the ground due to the recession.

The Times of Skinker DeBaliviere profiled the plan in its April-May 2006 issue (image below). The Shapiros rehabbed their building across the street, which now hosts restaurant Tavolo V and offices for Prozess Technologie. The empty lot has languished as filling commercial spaces on the south side of Delmar to the east has proven difficult. There simply needs to be more people living nearby.

At a meeting of the Delmar Commercial Committee today, Jay Case of Clayco presented its plan for a large infill project. Clayco considers the adjacent Delmar Loop MetroLink light rail station a great asset and has successfully developed TOD (Transit-Oriented Design) developments in Denver, which they believe can be repeated here. Their aim to help build and be a part of a walkable, accessible neighborhood. The development would include 200 structured parking spaces for tenants within the building as well as bike storage for at least 150 bicycles. On-site car sharing would also be made available to tenants. The cost burden of providing below-cost car storage likely will lead Clayco to seek tax abatement. Existing buildings to the east and west are planned to remain. Big Shark Bicycles will reportedly be moving from its home for past decade and is searching for a new location. Ideas for the building, owned by Joe Edwards, include a mid-sized concert venue.

Planned retail space may be divided into as many as three bays. A soft retailer is desired. There will be no public parking for retail within the project. There is also an opportunity for a rooftop space for a commercial tenant. Clayco expressed confidence it will secure financing. Plans are expected to be submitted for review with the City of St. Louis soon. They hope for a spring ground-breaking, a 12-15 month construction period, and completion in the fall of 2017. {current view of development site from past Loop Retail Study} {rendering of possible development from past Loop Retail Study}