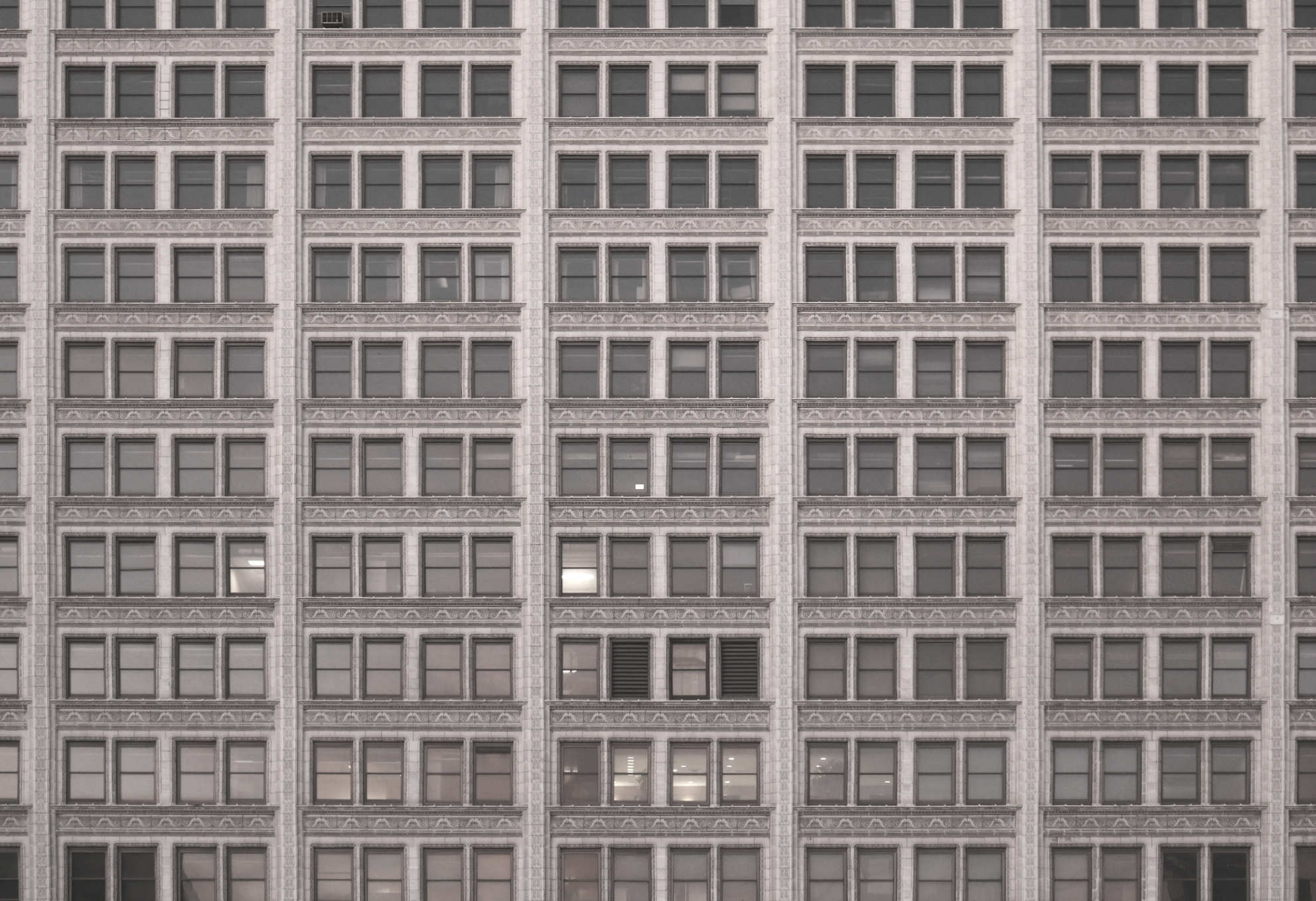 Reached for comment, Hudson Partner Avi Greenbaum told nextSTL the group had been looking at the St. Louis market for some time and expressed confidence that the downtown market would support the mixed used plan being considered. Recent development announcements are said to not impact plan for the Railway Exchange.

“We like to build best-in-class assets, not just a decent project,” Greenbaum stated. “The type of product we’re building is different than what whatever else is building.”

Asked about factors supporting the redevelopment plan, Greenbaum stated, “None of these deals would be possible without historic tax credits. We’re very grateful to the state of Missouri and St. Louis leaders for supporting the program.” He also stated his belief that the departure of the NFL Rams will be an overall positive for the downtown hospitality market and that the team’s presence had been a negative influence on downtown convention business.

Hudson Holdings specializes in redeveloping large mixed-use historic buildings near the urban core. As stated on the company website, “With an emphasis on downtown historic adaptive re-use, Hudson infuses its vision and flare to energize older, transformational assets.”

The Railway Exchange certainly fits that profile. While such expansive and historic properties have proven to be among the most difficult to redevelop, Hudson has undertaken similar projects in Midwest markets such as Louisville, Cincinnati, and Cleveland.

While the firm has completed several historic redevelopments, one stands as particularly analogous. Hudson purchased the 1M+ sf Huntington Building in downtown Cleveland for $22M last year and have planned a $280M renovation. The 21-story building was completed in 1924.

The project plan for that massive building includes 550 apartments, 400K sf of office space, 300 high-end hotel room, 200K sf of retail, banquet and conference space and the reopening of the building’s soaring barrel vaulted lobby. The Huntington Building project was green-lighted after receiving $25M in tax credits the state of Ohio made available for “catalytic” historic-preservation projects.

If redevelopment plans proceed, the Railway Exchange would be the fourth historic building on a three-block stretch of Olive Street in downtown St. Louis to be given a new life. The 538K sf Arcade Building reopened this year, and Restoration St. Louis is planning the redevelopment of Louis Sillivan’s 705 Olive building as has the adjacent Chemical building under contract.

Developer Brian Hayden is converting a large part of the Mid-Century Laclede Gas building into 111 apartments. It occupies a corner facing the Arcade and Chemical buildings. Hayden is also redeveloping the Alvern building at 10th and Locust Streets into apartments, and further west the 500K sf Jefferson Arms is under contract. 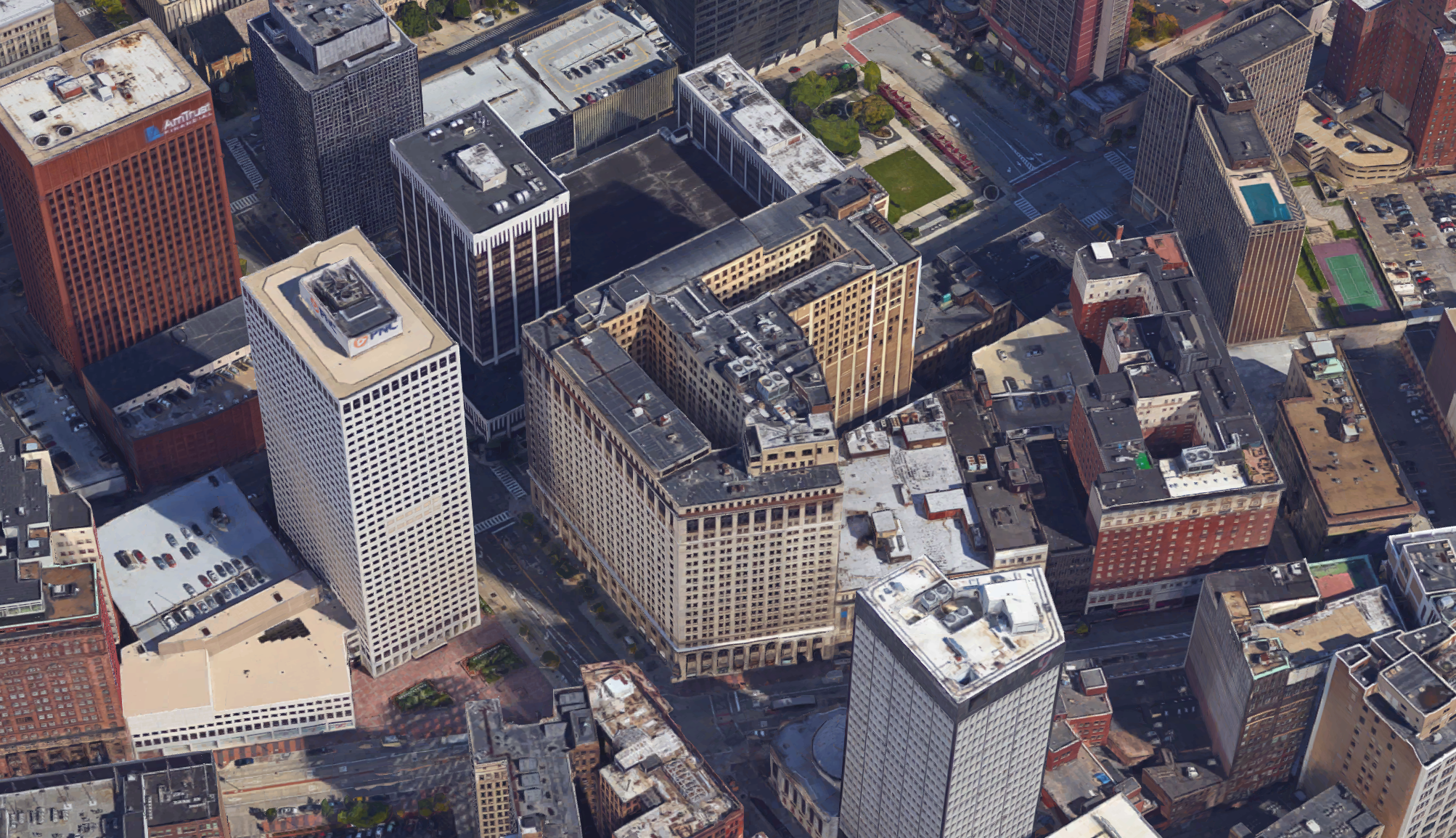 {the Huntington Building in downtown Cleveland} 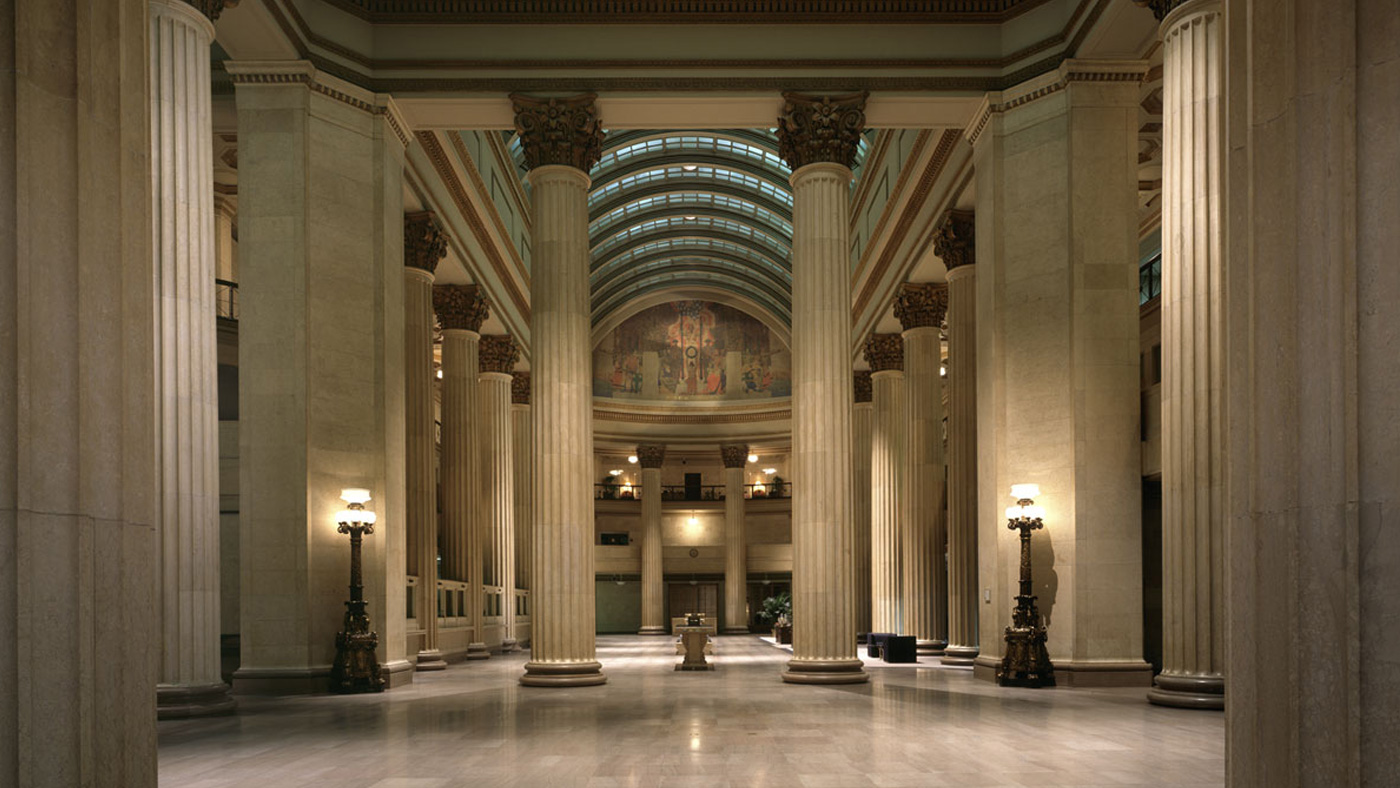 {interior lobby of the Huntington Building – image via Hudson Holdings}

Full construction activity is scheduled to be underway following the conclusion of the Republican National Convention this year. If all goes according to plan, the vast majority of the project should be completed in 2018. Speaking to Cleveland.com regarding the Huntington Building, Greenbaum stated, “We think that Cleveland as a city is starting to boom. We are here for the long term.”

At its completion in 1914, the 21-story Railway Exchange building was not just the largest building in the city, by far, but also the tallest. The building was home to Famous-Barr Co., the flagship name of the May Department Stores Company. Founded in Leadville, CO in 1877, May would move its headquarters to St. Louis in 1905. In 1911, the Famous Clothing Store, a May company, and The William Barr Dry Goods Company were merged to create Famous-Barr name.

In 2005 Federated Department stores announced it would acquire Famous-Barr and convert existing stores to the Macy’s label. Federated became Macy’s Group, Inc. with headquarters in Cincinnati. By 2008, Macy’s bond rating was just a step above junk status. Thousands of job cuts have followed, including more than 7,000 in 2009. In September of last year, Macy’s announced the closure of 40 additional stores. In January of this year, the company announced it would close its Bridgeton, MO call center, eliminating 750 St. Louis area jobs. 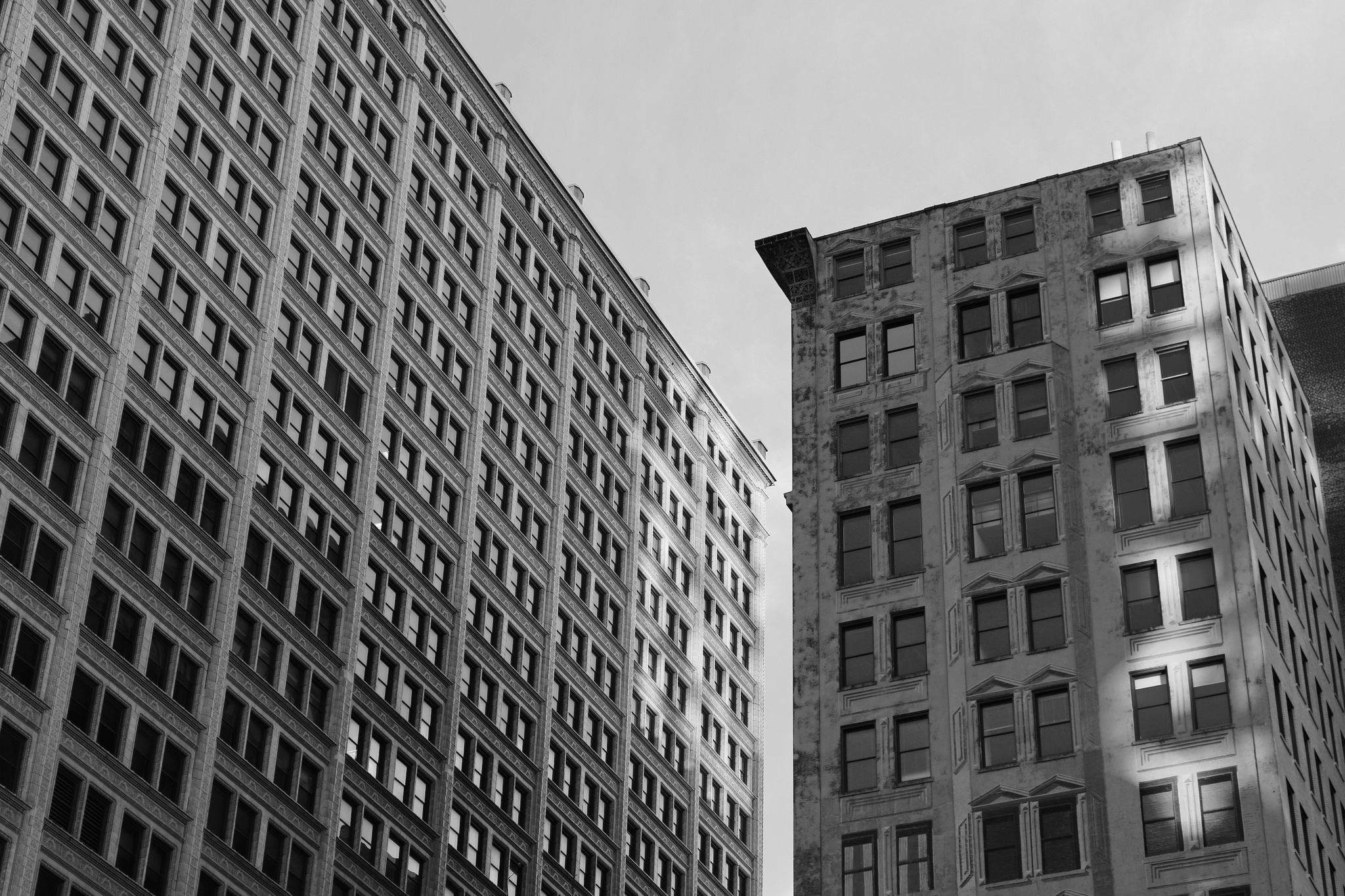 {the Railway Exchange looming over 705 Olive, which is being redeveloped} 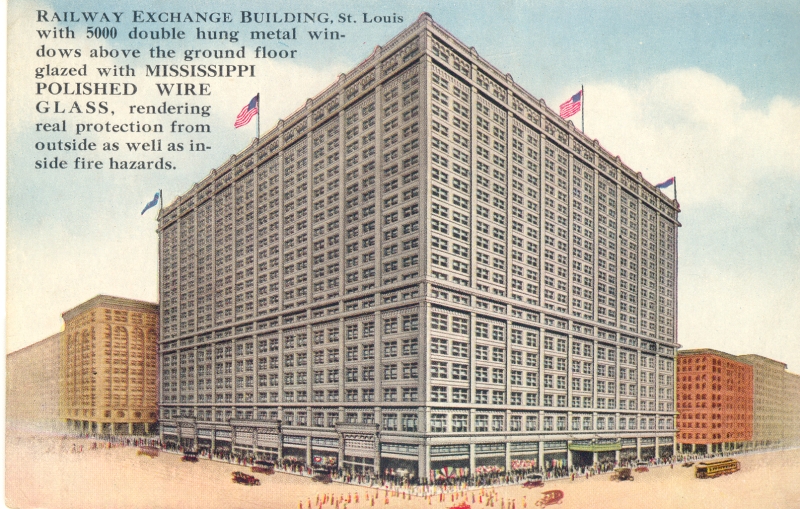 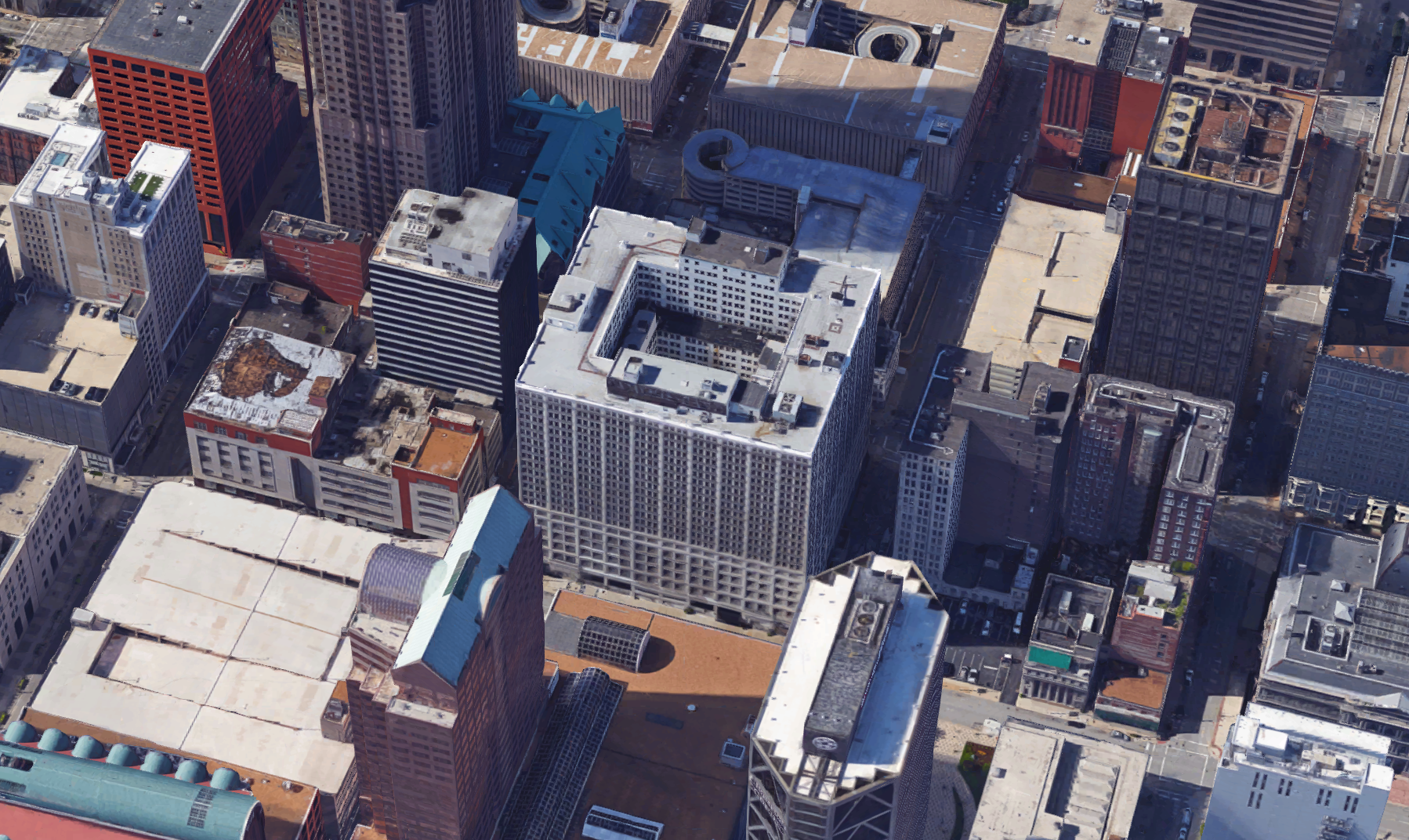 Bruce Development of St. Louis bought the Railway Exchange building from Macy’s in 2010 for $18.5M. The plan was to downsize the department story from seven to three stories, and lease up the building with offices and perhaps additional retail, a $112M project in all.

The City of St. Louis approved more than $27M in Tax Increment Financing (TIF). The city also offered $17M in New Markets Tax Credits, and historic tax credits were to be utilized as well. According to an article in the Post-Dispatch, much of that money was never spent, though the balance ledger is unclear.

Despite headwinds for department stores, and large downtown stores specifically, the redevelopment plan for the building focused on retaining Macy’s. In January 2013, Macy’s announced it would also close stores in downtown Minneapolis and Houston.

Bonds in the amount of $4.6M were issued for the renovation and downsizing of the department store. They were to be repaid with revenue from a combination of sales tax and payroll tax. Estimates for each fell short, and while the city did not back the bonds, by 2012 revenue failed to cover interest payments on the bonds.

At the time of the Macy’s closing, the developer stated that there was no reason the renovation of the building couldn’t continue. Since then, T-Rex Technology Incubator moved out of the building and into 911 Washington Avenue. No visible work has taken place since. The Vanishing St. Louis site has video and images of Macy’s last days in the building. 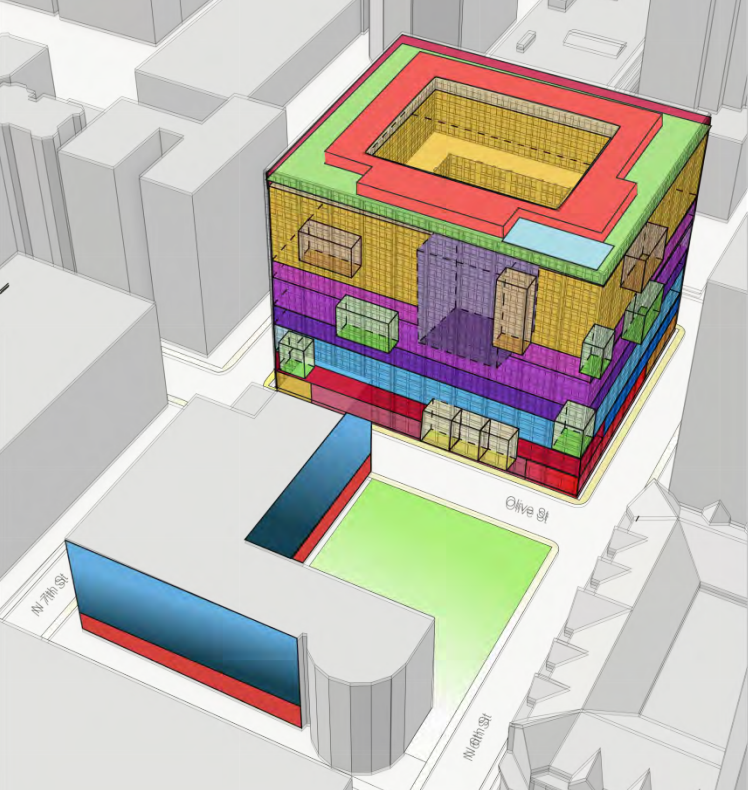 In 2015, the local chapter of the Urban Land Institute (ULI) conducted a Technical Assistance Panel (TAP) to imaging a new future for the building (presentation embedded below). In short, the TAP found that renovation costs were likely to exceed $250M, require significant subsidy, and necessitate a wide mix of uses. Uses imagined included retail, apartments, condominiums, boutique and extended stay hotels, traditional office and contemporary co-working spaces, fitness and playground space, and more.

Again, Hudson appears to be a developer capable of delivering a large, mixed-use project. Earlier this month Hudson Holdings closed on the historic Mark Twain building (Kansas City Athletic Club) in Kansas City. Planned there are a hotel and apartments. The group also owns the 400K sf historic Starks Building in downtown Louisville.

It was reported in March that Hudson purchased the Textile Building in downtown Cincinnati for $12M. Greenbaum told the Cincinnati Business Courier the firm is focused on historic adaptive re-use. “We’re an urban developer. We love downtown markets,” Greenbaum stated. Speaking to Cleveland.com regarding the Huntington Building he stated, “We think that Cleveland as a city is starting to boom. We are here for the long term.” The Textile Building was completed in 1906 and is 12-stories and 235,384 sf. A $70M renovation is planned.

The Huntington Building in Cleveland: 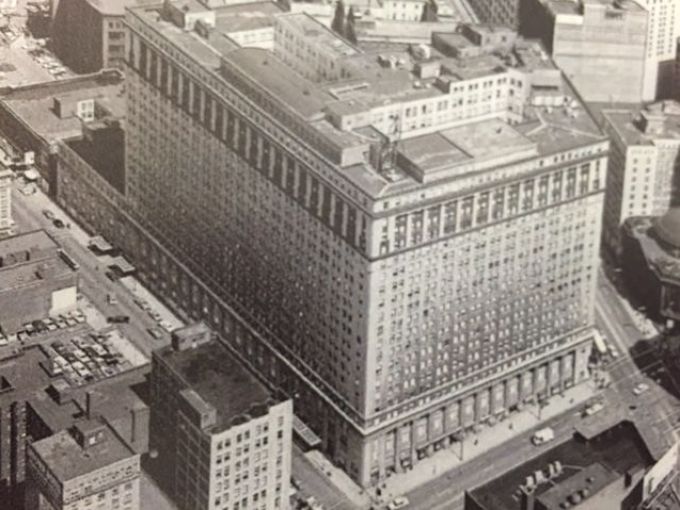 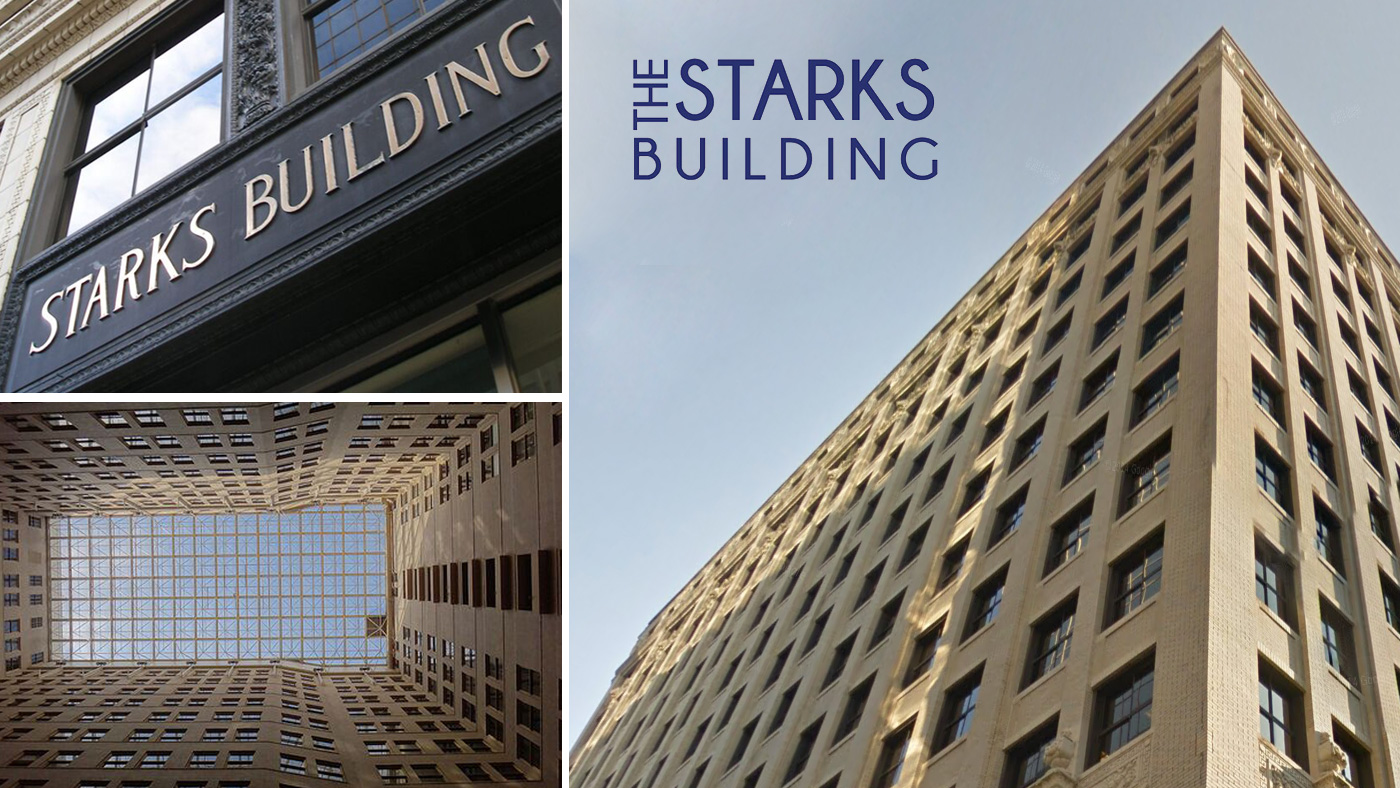 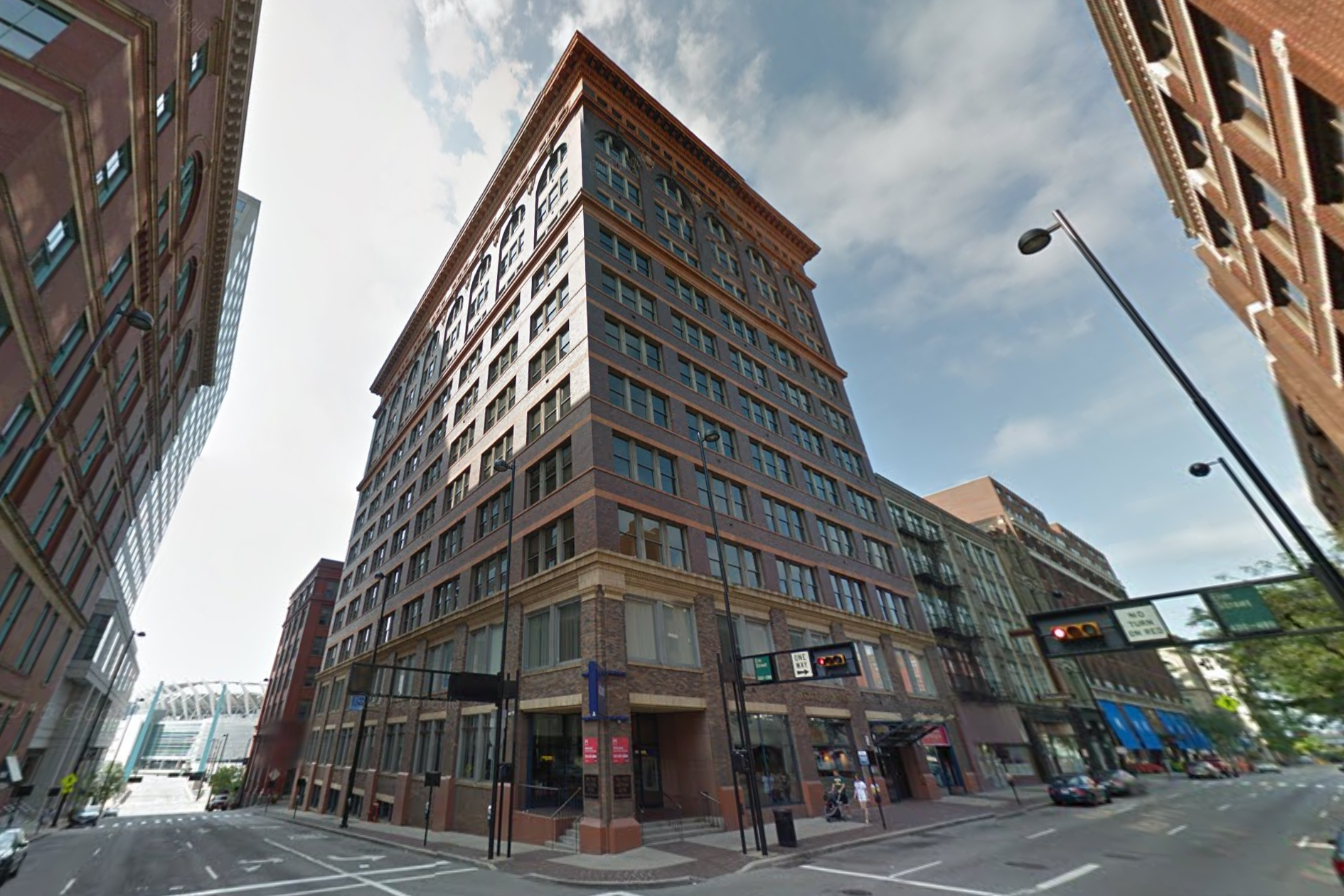