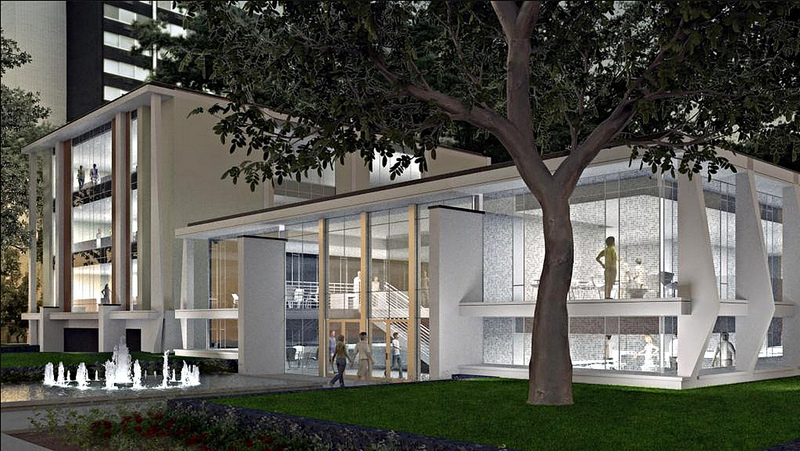 At the same time The Koman Group is proposing a new development at 34 N. Euclid, the firm is aiming to reinvent a noted Mid-Century building just down the street in the Central West End neighborhood. Envisioned is a remaking of the 1961 Optimist International office building at Lindell Boulevard and Taylor Avenue.

On the market for an extended period of time, the half-submerged basement and one full above-ground level corner building, and newer three-story addition have been considered a challenge to repurpose. While a tenant mix has not be revealed, the 33K sf complex would be redeveloped as office space. Koman will reportedly seek $1.5M in tax increment financing (TIF) for the project. New Market Tax Credits are also being sought.

The total project cost is expected be $9.3M and begin as early as February 2016, taking up to a year to complete. The older building is just short of 19K sf, with the addition adding 14K sf. The renovation would accommodate multiple tenants and is being planed as spec office space. TIF is a subsidy that allows a developer to keep a portion of any new, or incremental, tax revenues generated by a project after completion. With TIF in the City of St. Louis, property taxes can be frozen for up to 23 years and 50% of any new local sales or earnings tax can be used to reimburse a developer for project costs. According the the project’s TIF application, the $1.5M subsidy is estimated to be fulfilled in approximately 12 years, depending on actual revenue.

In May 2014, we reported on a proposed 14-story, 200-unit apartment building at 3493 Lindell. That project somewhat surprising failed to gain support for tax abatement from the Park Central Development Corporation. While the city would benefit if development no longer assumed tax abatement support, this proposal to add perhaps 300 new residents to the area disappeared without it. The existing buildings have been off the city’s tax roles since being developed by the non-profit Optimist organization. {the past Forum Studio designed proposal for 3493 Lindell}

The Optimist International headquarters consists of two buildings, the older of which dating from 1961, is a Neo-Expressionist building designed by the firm Schwarz & Van Hoefen. The three-story addition was constructed in 1979. There is certainly some support for saving the buildings as contributing to the collection of Mid-Century buildings along Lindell.

The project rendering (top) shows significant changes to the facades, aiming to preserve the building’s form, while providing significantly more light to interior spaces. The resulting image certainly looks nice, but perhaps there’s a tinge of irony that a TIF may be supported to alter a building that was just recently saved by a lack of tax abatement support based on the desire to not subsidize the loss of an architecturally notable building.

Regardless, its good to see investment continue in St. Louis, and long stagnant buildings be re-envisioned. The Optimist building would mark another important urban investment by Koman, which has been shifting its focus from suburban Creve Coeur to projects like 700 Market and Kingshighway/Lindell. This project proposal, as well as Koman’s 34 N. Euclid project will be presented to the Park Central Development Corporation at its upcoming August meeting.

Other projects under development in the Central West End include The Orion with 177 apartments and a Whole Foods grocer Mills Properties at West Pine and Euclid, and a 12-story, 217-unit Opus building at Lindell Boulevard and Euclid. {the Optimist International headquarters at 4494 Lindell – image by Toby Weiss}