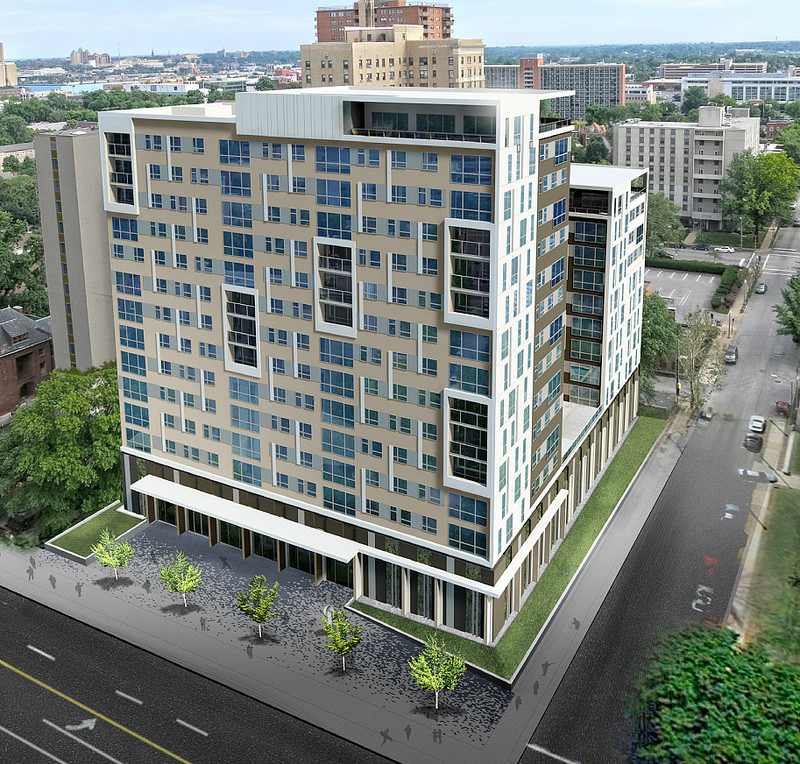 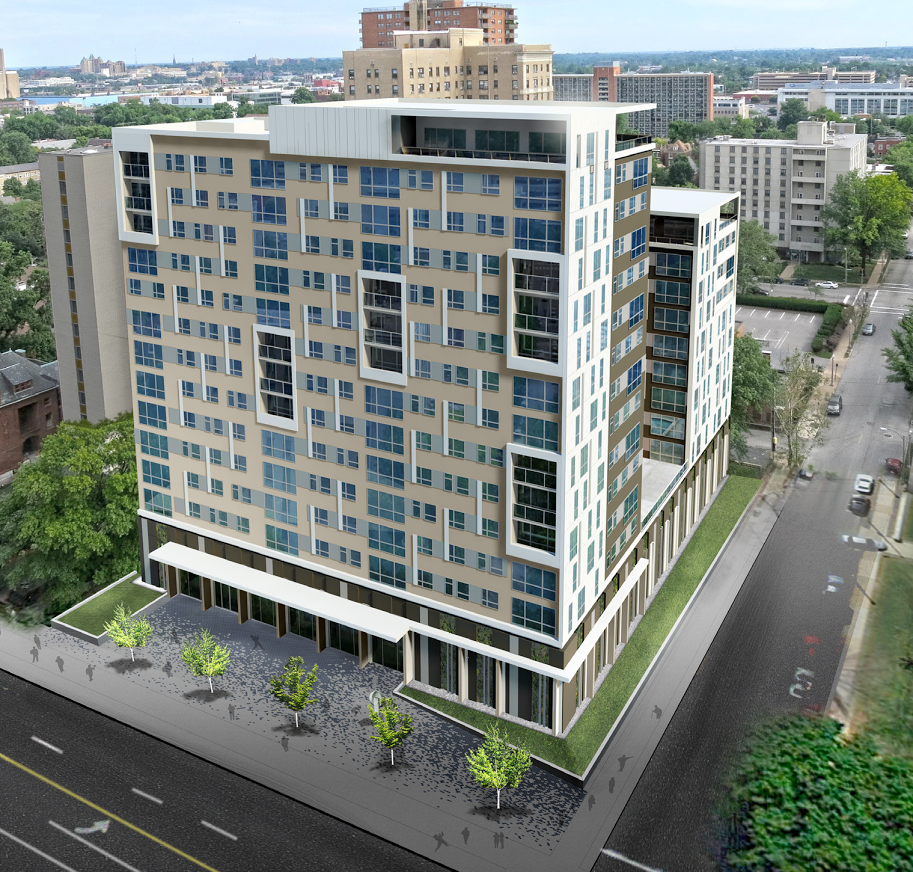 The next phase of Central West End Development starts now. A proposal by Covington Realty Partners of Clayton envisions razing the existing Optimist International headquarters building at the corner of Taylor Avenue and Lindell Boulevard in the city’s Central West End. A $50M, 14-story, 200-unit apartment building would rise in its place.

Resident parking would be built on several levels and be hidden from the street. The available rendering shows parking access from the existing rear alley. The developer envisions a more contemporary design than recent proposals offering faux historic finishes, or brick facades to mirror the area’s most common building material.

Located along the proposed Lindell streetcar line, the development could add 300 people to a two-block area already set to welcome up to a thousand new residents in the next 18 months. The site of more than a billion dollars in development in addition to the billion dollars of expansion planned by the nearby medical center, the city’s central corridor appears to be starting a new phase of development. To date, infill projects have been focused on vacant lots or underutilized buildings.

The Park East Tower was built on a parking lot. Two apartment buildings with awkward retail space made way for the new BJC headquarters. The Doctor’s Building was demolished, and combined with a large adjacent parking lot to make way for the mixed-use building that will be home to a Whole Foods. Further east, a gas station has made way for apartments. The 4643 Opus project will replace a two-story vacant office building. 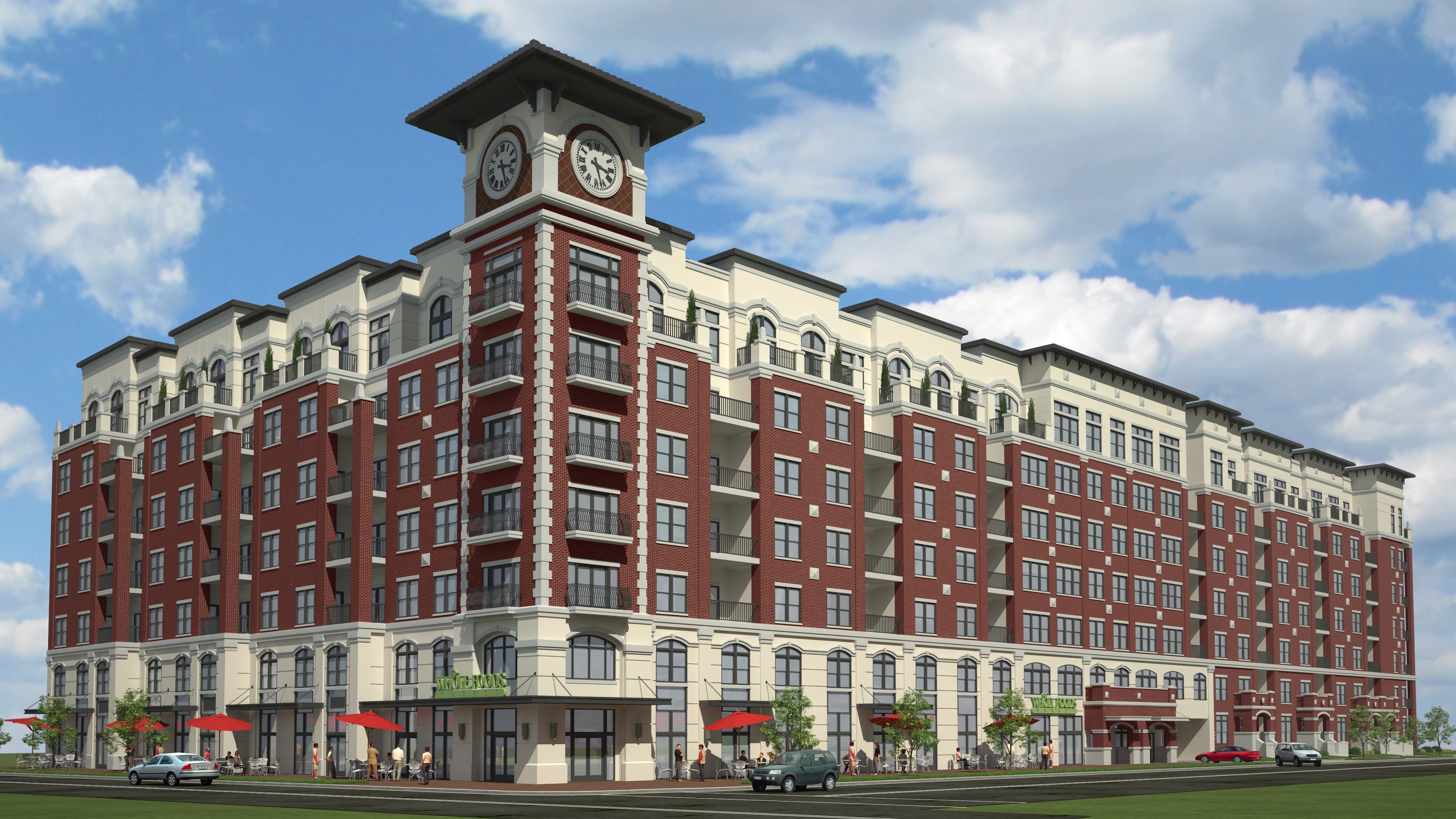 These haven’t been particularly disruptive developments. There have been few hard choices, other than materials used, parking options, and the like. Now, as development heats up and land prices increase, buildings in use for decades and still in use today will be targeted for redevelopment. Proposals to replace other buildings are currently being considered by developers.

The recent 4643 Lindell proposal was put through the wringer by an active neighborhood advisory group (ultimately forcing the developer to add a full level of additional parking) that expressed concerns about material choices, windows, streetscape design, and mostly parking. The Covington proposal is unlikely to be met with the same type of scrutiny south of Lindell, where the project falls within the purview of the Park Central Development Corporation. 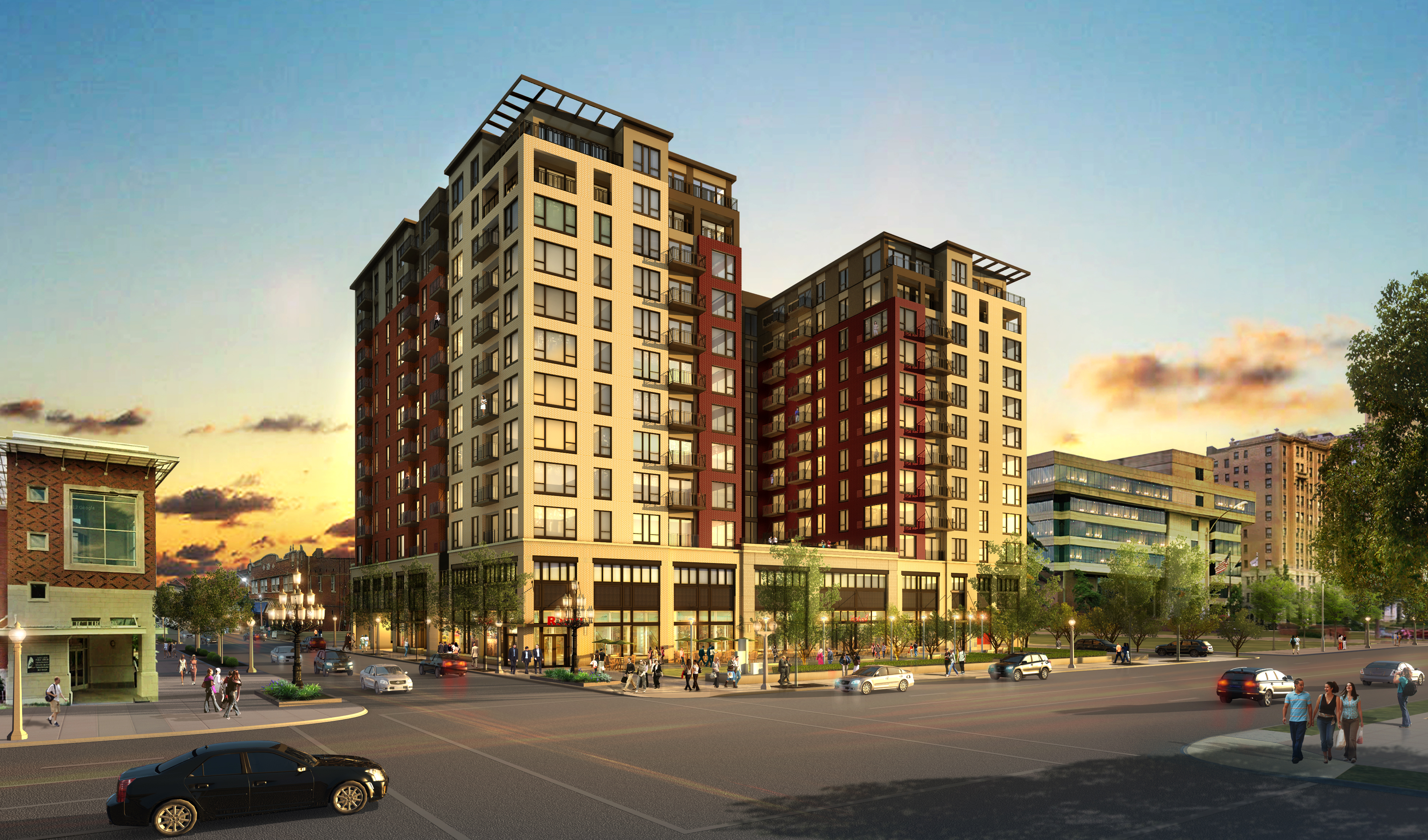 {the 4643 proposal by Opus eventually won approval from neighborhood residents}

With no retail, significant parking allocated for residents, fewer NIMBYS, and a development corporation that gave a project like Aventura the green light, the project may win official approval quickly. There will, however, be opposition. The Optimist International building is recognized as a quality example of Mid-Century Modern architecture. The style has become the focus of preservation efforts in St. Louis, with the city recently funding a survey of MCM architecture.

Immediately across the street from the proposed development is a surface parking lot owned by the Archdiocese of St. Louis. It was once the site of the MCM San Luis apartments. Preservationists fought to preserve that building and the effort raised awareness of the significant MCM legacy on Lindell. The San Luis was demolished in 2009.

The Optimist International headquarters consists of two buildings, the older of which dating from 1961, is a Neo-Expressionist building designed by the firm Schwarz & Van Hoefen. An addition was constructed in 1979. It seems likely that the city’s Cultural Resources Office would recommend preservation of the building as it is considered to contribute to the Central West End Local Historic District. Such a recommendation has not always swayed the city’s Preservation Board, which can vote to take or leave the CRO recommendation. 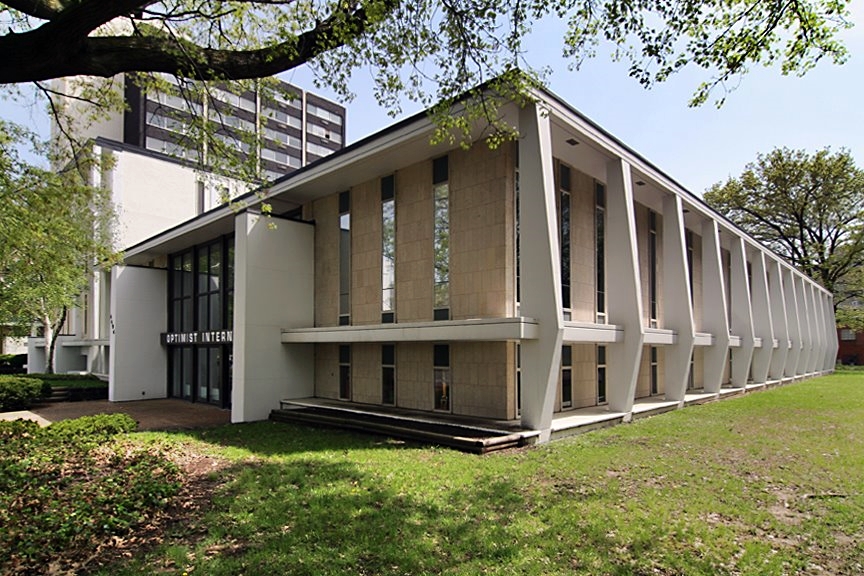 {the Optimist International headquarters at 4494 Lindell – image by Toby Weiss}

The developer has previously presented the outline of the proposal to Park Central and nextSTL is told that the refined proposal will be presented to that organization’s development committee next week. If it finds support here, the CRO would present a recommendation to the Preservation Board, and consider public testimony.

While preservationists and urbanists often huddle under the same umbrella in St. Louis, proposals like this are likely to find widely varying opinions. Here, preservation has most often been the best option for the urban environment, as a demolished building is frequently replaced with a parking lot, grass, or a fountain. It’s been noted that the San Luis, as well as the Midtown Saucer building, which was saved from the landfill, are not urban structures.

In the next phase of development in the city, as more difficult decisions are presented, tough choices will be required, and prioritizing patterns of development will be necessary in a way not currently familiar in St. Louis. Many of the easy decisions have been made, but proposals like this one will demand new conversations and force residents to choose what type of city St. Louis will become. 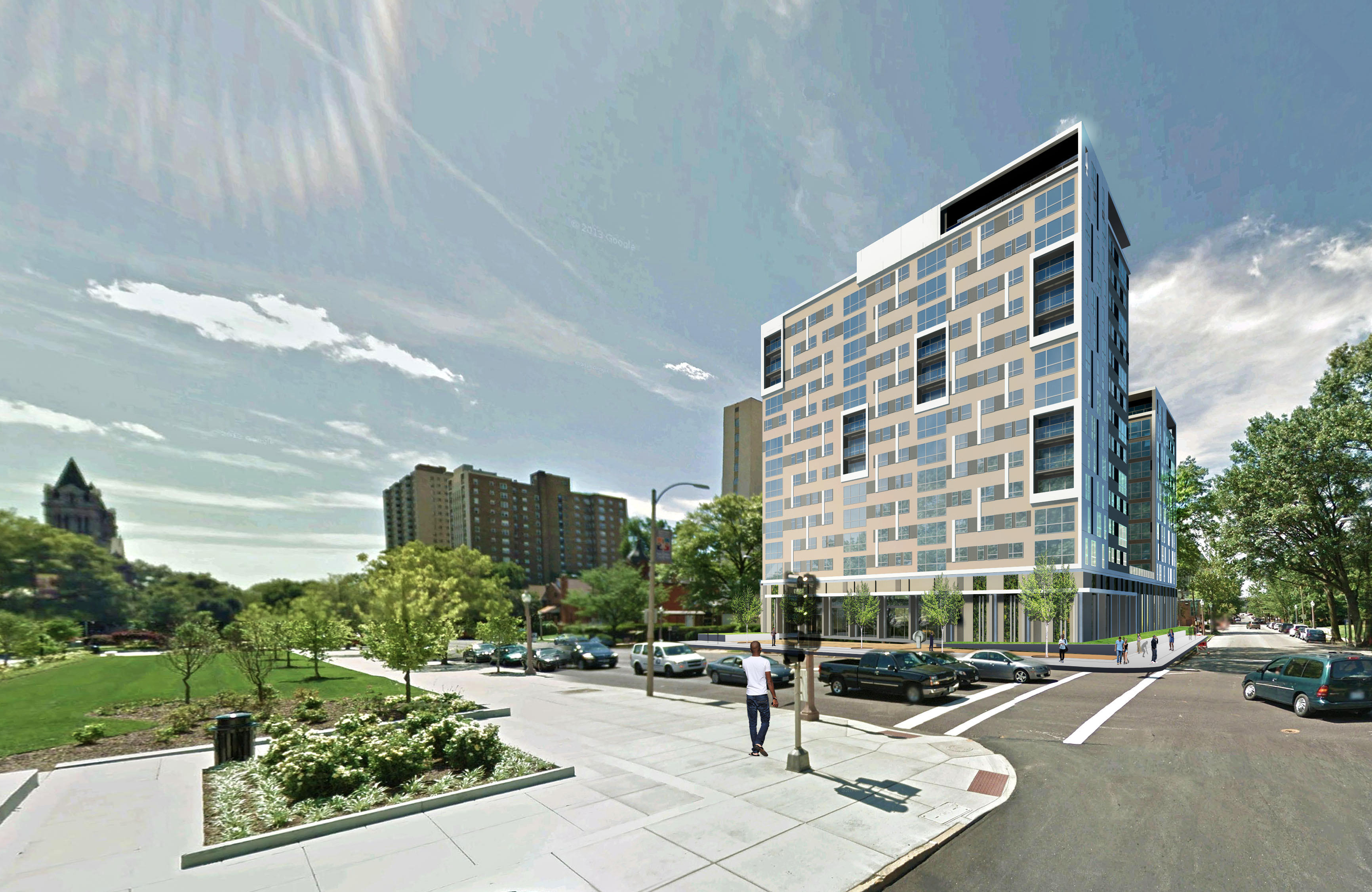 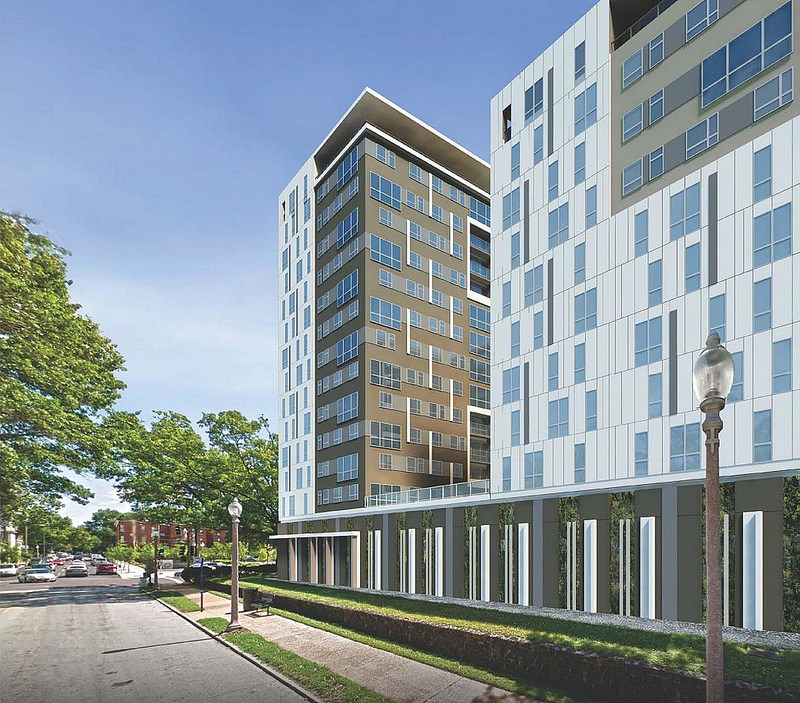 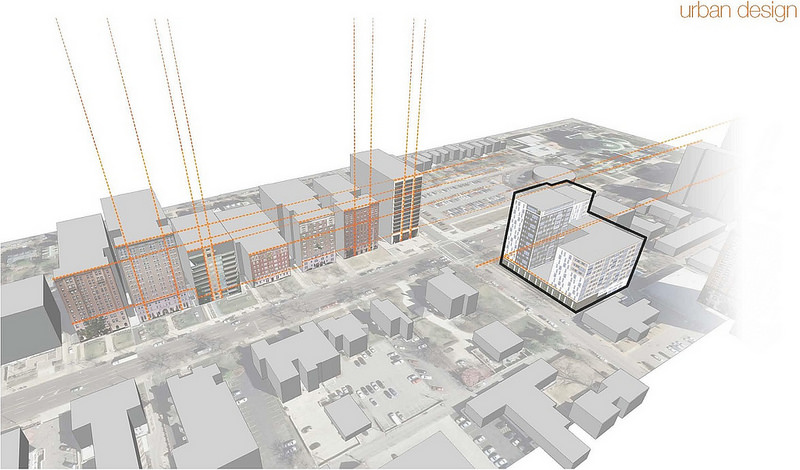 At its meeting last night, the Park Central Development Corporation’s Central West End-Midtown Development Committee endorsed the Covington proposal above. However, the group declined to support tax abatement, and is asking that financing and a building permit be acquired before demolition of the existing Optimist International building begins. The decision is meant to allow the development to move forward, but not subsidize the demolition of a recognized Mid-Century Modern landmark. It’s unclear at this point whether the developer is prepared to move forward without subsidies.

The blue circle represents the Covington proposal at Lindell at Taylor: 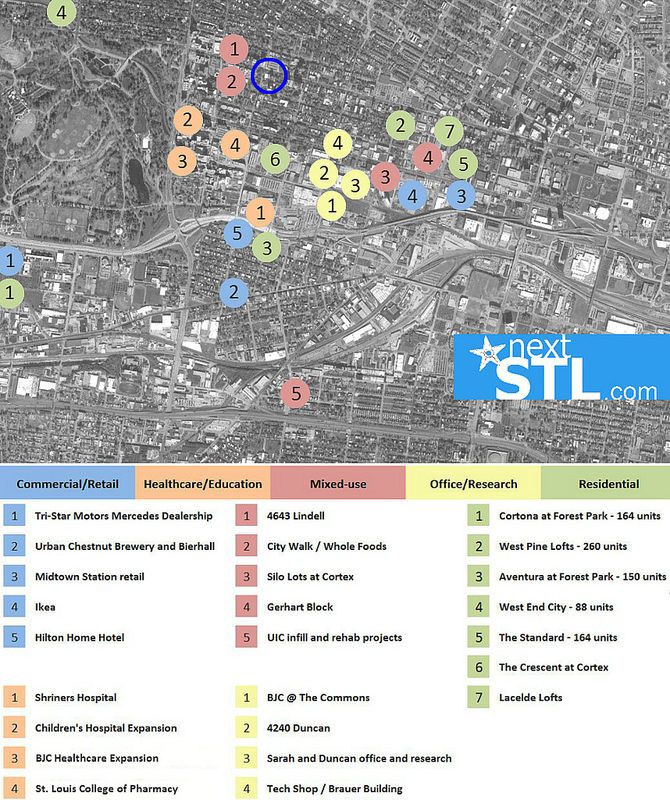