“The Standard” a 164-unit 465-bed residential apartment project is set to replace the Mobil gas station at Forest Park Avenue and Vandeventer in the city’s Midtown neighborhood. The infill project adds to a continuing boom in central corridor residential construction and continues the complete remaking of this corner of the City of St. Louis.

More than 2,000 residential units are planned or now under construction in the area of Forest Park and east to Saint Louis University roughly along Forest Park Avenue. What isn’t standard is that this project is quickly moving forward without any subsidy. There’s no tax abatement, no TIF, no CID, or other money acronym attached. With each project and each subsidy, the stated plan by the city has been to reach a point where development occurs without millions of dollars of assistance. This will be the first large scale project in this area to do so.

The project is being developed locally by Sangita with backing from Landmark Properties and Harrison Street. Sale of the property is expected to close in the coming weeks with groundbreaking to immediately follow. The project is planned for a August 2015 completion. The area will see a crush of construction as construction of the IKEA on the opposite corner of the Forest Park and Vandeventer Avenues gets underway.

Although no announcement regarding tenants has been made, it’s expected that Pace Properties will soon be underway with their Midtown Station development on the southeast corner of the same intersection. A discount clothing retailer, grocery, and other retail is expected. Until recently, development in this centrally located area was scoffed at by knowledgeable longtime residents. Too many proposals had come and gone to not be cynical. With multiple significant projects now confirmed, the recent boom shows no signs of ebbing. 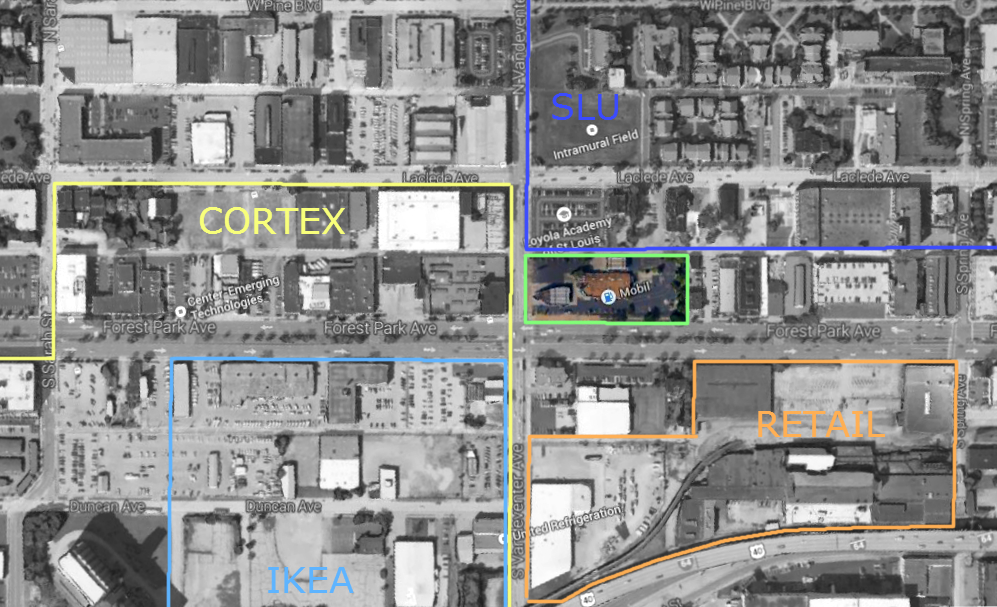 The Standard will offer approximately 400 parking spaces in a structured garage wrapped by the residential building. Access will be from the existing alley on the north side of the site. Marketing primarily to students, amenities will include study rooms and social spaces. The property will feature several five bedroom units. There is no planned retail component, but a 7,000 sf clubhouse space could be converted to retail if there is future demand. Developers are currently scouting nearby retail space and hope to open a 3,000 sf leasing office, likely on nearby Lindell Boulevard.

The Mobil station will be the second gas station at the intersection to close in recent months. A BP station was closed and demolished last year on the site of the IKEA. The Mobil station offers a more distinctive presence than the average gas station, and was known for their car wash specials – free wash for all green cars on St. Patrick’s Day.