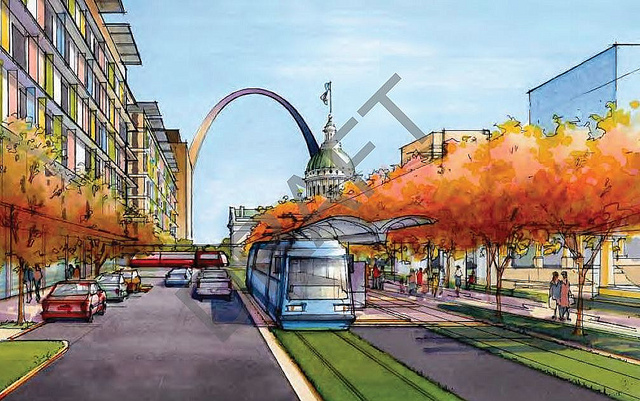 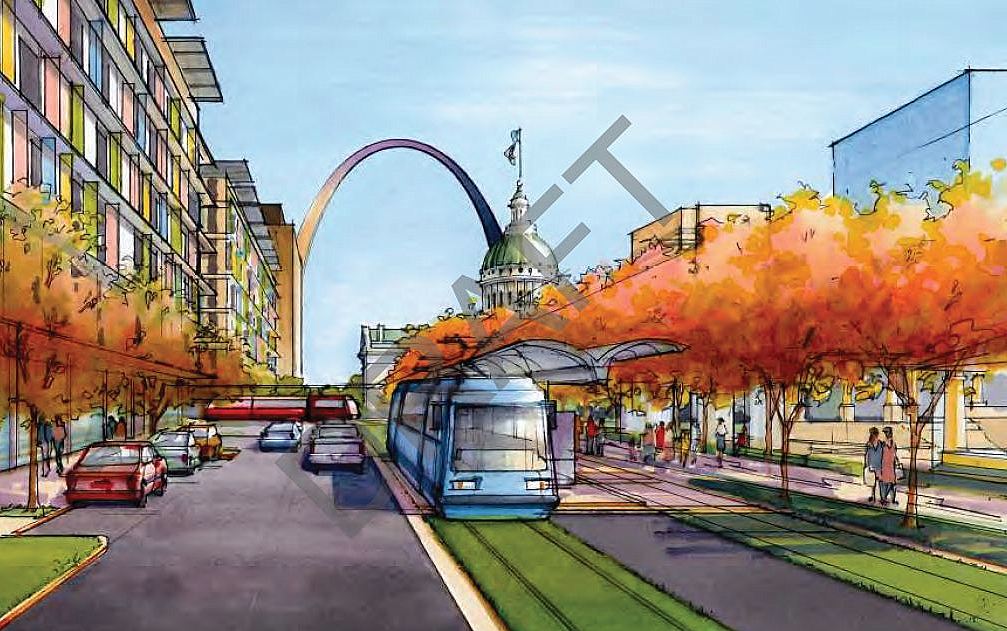 What started simply as an idea to increase connectivity of the Central Core of St. Louis has now culminated in the impending release of the first phase of a study for a seven mile streetcar line. In June of 2012, The partnership for Downtown St. Louis lined up private funding for a $200,000 streetcar study and issued a Request for Qualifications. Out of the responses to the RFQ, URS Corp was selected to carry out the feasibility study. The study was meant to take a broad look at the feasibility of a hypothetical streetcar line- determine the best location, make preliminary estimates of construction costs, estimate potential ridership, determine the ability to spur new development, and calculate the competitiveness of the proposal for Federal and local funding. All images here are from that feasibility study. The study and details of a public open house scheduled for March 7 can be found below.

Streetcars have become the next big thing in mass transportation for cities. Currently, cities such as Atlanta, Cincinnati, Milwaukee, and even Tucson, AZ are considering streetcar lines. Closer to home, Kansas City, MO has approved a two mile line, and is studying a second phase. There is much competition for Federal Funding, at both the Small Starts and New Starts level. URS and The Partnership appear to have developed a solid plan with overall numbers that look realistic, but are still competitive for funding. Let’s dig in and take a closer look at the St. Louis Streetcar Plan. 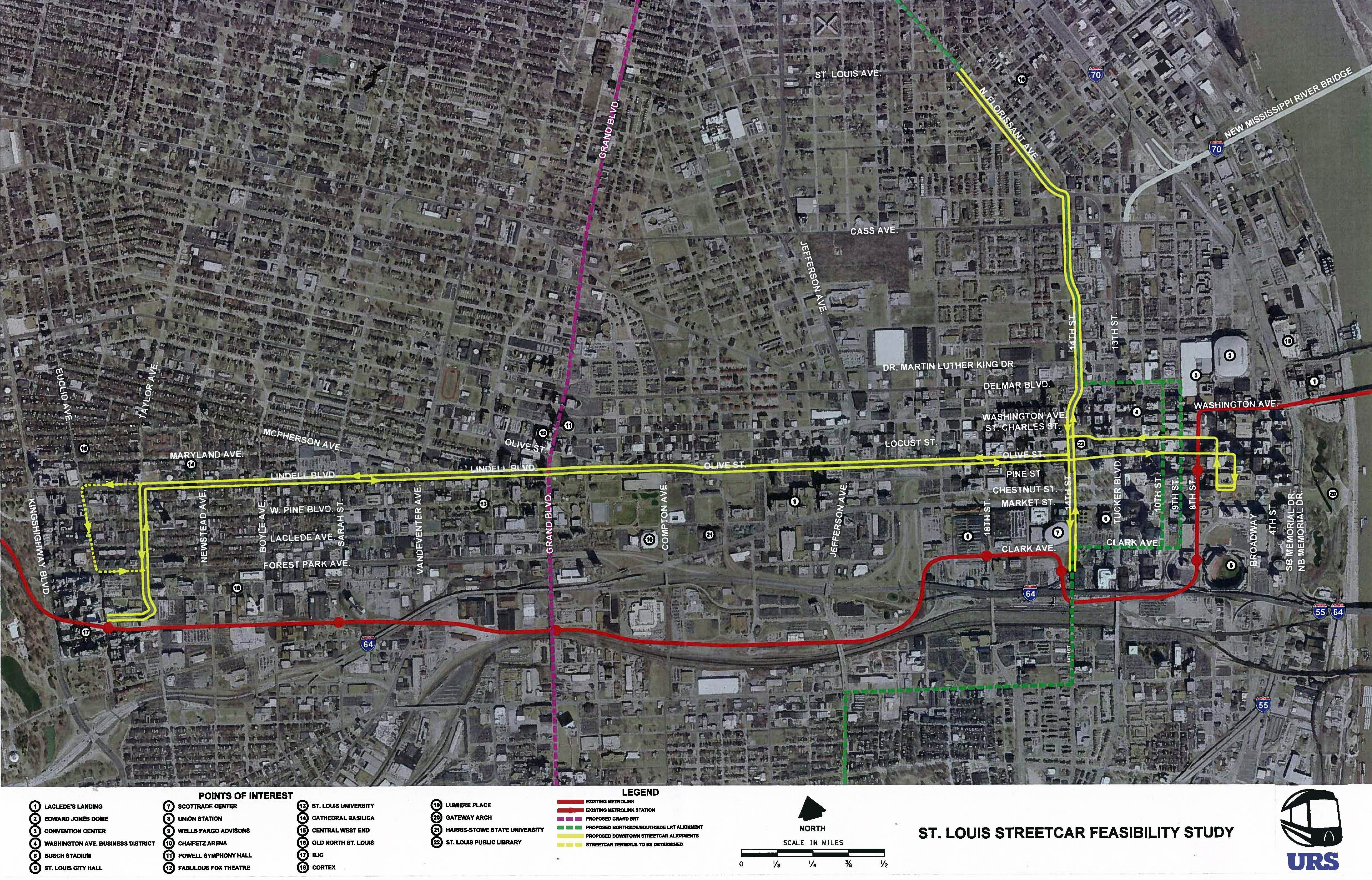 The feasibility study actually considers two lines that will work in tandem. The main double-track line runs East and West mainly on Olive and Lindell. The eastern terminus makes a loop along Olive, 6th, Chestnut, 7th, and Locust. This would allow for a station at Keiner Plaza and just one track on the narrower streets of the CBD. The western Terminus would go south on Taylor to the current Central West End MetroLink Station, or alternately make a loop on Euclid South to Forest Park Ave and back North to Lindell on Taylor. This line hits several large employment and residential centers. 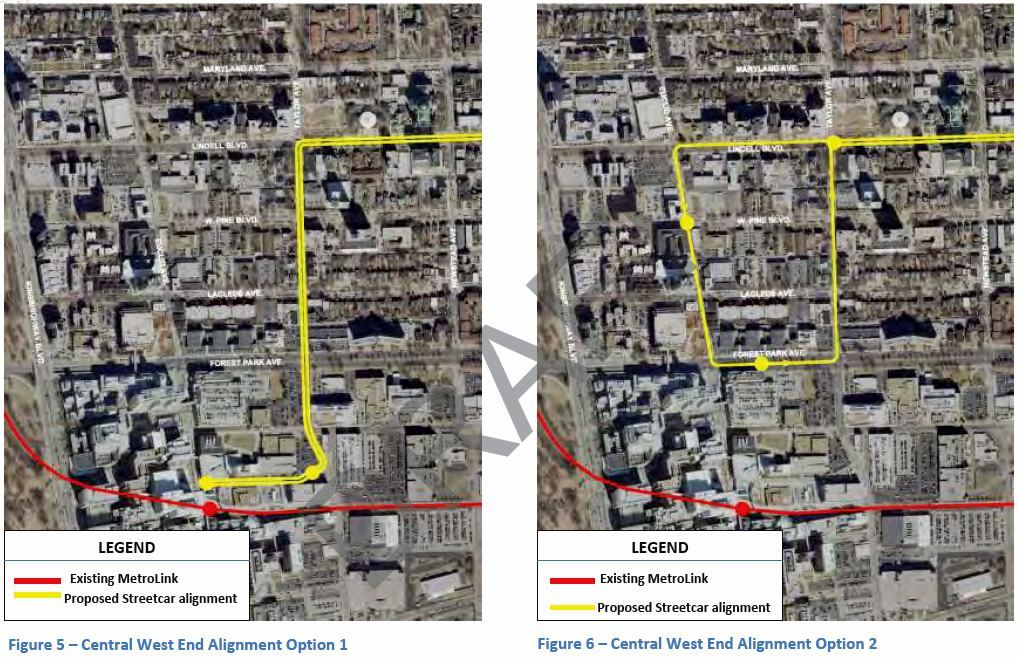 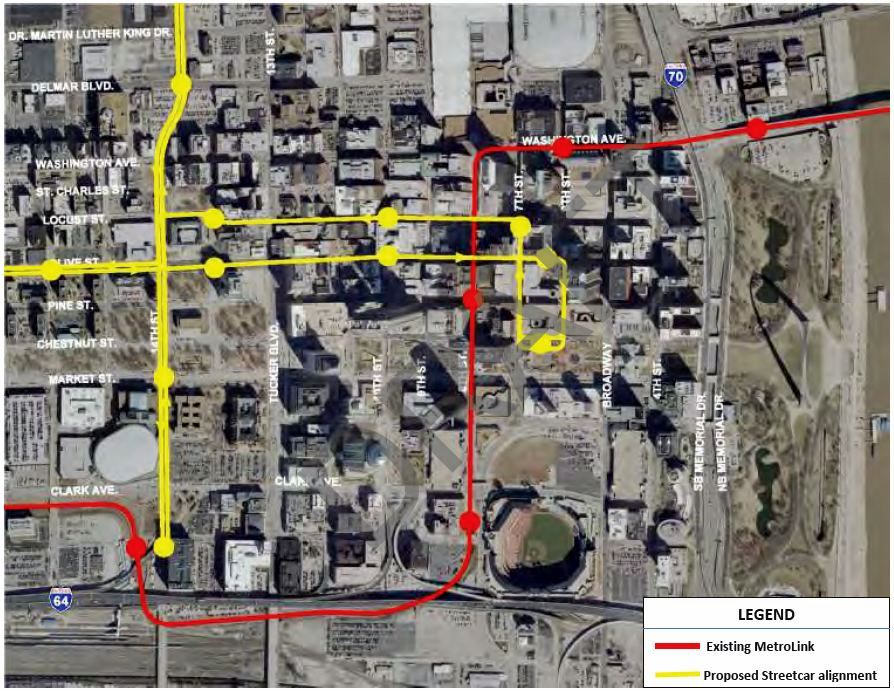 The north-south alignment’s northern terminus is on North Florissant Avenue at St. Louis Avenue. The double-track route runs south on North Florissant Avenue and 14th Streets, uses the single-track loop through downtown, terminating on 14th Street at Metro’s Civic Center station. This line will greatly improve connectivity between near north side neighborhoods, including Old North and Carr Square, with the Central Core of St. Louis.

Low-floor Modern Streetcars are proposed for the line. Each car would have a fifty person capacity and run from 5:00 am- Midnight. Headways would be ten minutes at peak times and fifteen minutes at non-peak times. 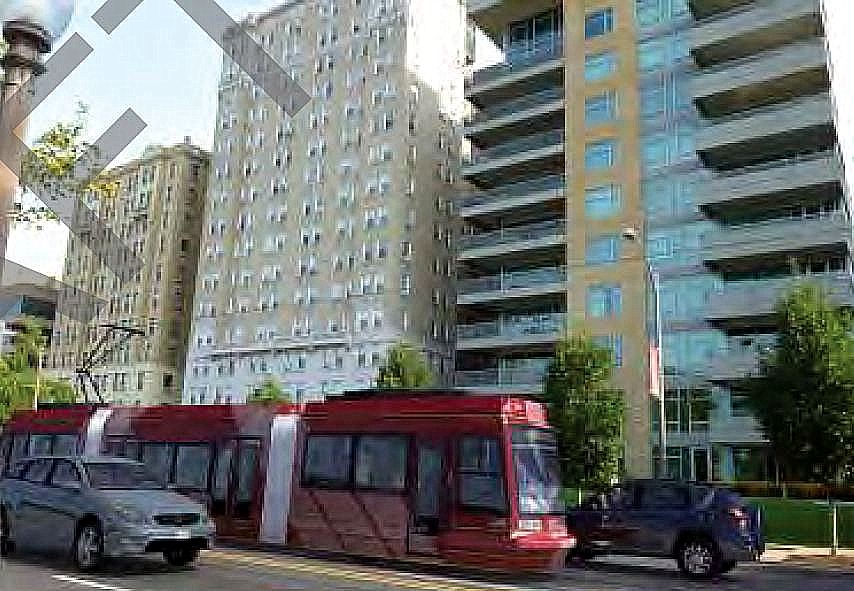 While the proposed line appears to duplicate current MetroLink service, it is actually more complementary. The streetcar would better connect the business, homes, and entertainment centers or the central corridor. More stops would be available along the route, and more sources of ridership would be within easy walking distance of stops. If you want to get from downtown to the Central West End or beyond quickly, you are likely going to choose the existing MetroLink line. However, if you are taking the train to get from one point to another along the central corridor, you are likely to take the streetcar line. For instance, if you are going from Jefferson and Olive to Vandeventer and Lindell, the streetcar will be a no brainer. In short, the streetcar serves local neighborhoods at a small scale level that MetroLink could never do, and should never do.

Ridership is projected at 7700 daily users. 2700 of these riders would be completely new to public transportation. Ridership projections are based off the population within an easy walking distance of the line. This is generally regarded as about a quarter mile, which typically comes to four blocks along the potential line. With a solid and growing residential population (with room for plenty more growth) and several employment nodes, ridership projections appear realistic.

Construction costs are estimated at $270 million for the roughly seven mile system. This estimate includes funding streetscape enhancements along the route. This would consist of new sidewalks, lighting, trees, street furniture, etc. The streetscaping is intended to make the new system more walkable and rider friendly, and could be removed from the plan if funding does not materialize. The basic system comes in at about $218 million. Depending on the level of improvements, the cost is between $30- 40 million per mile. This is a competitive range in comparison to proposed systems in other cities. 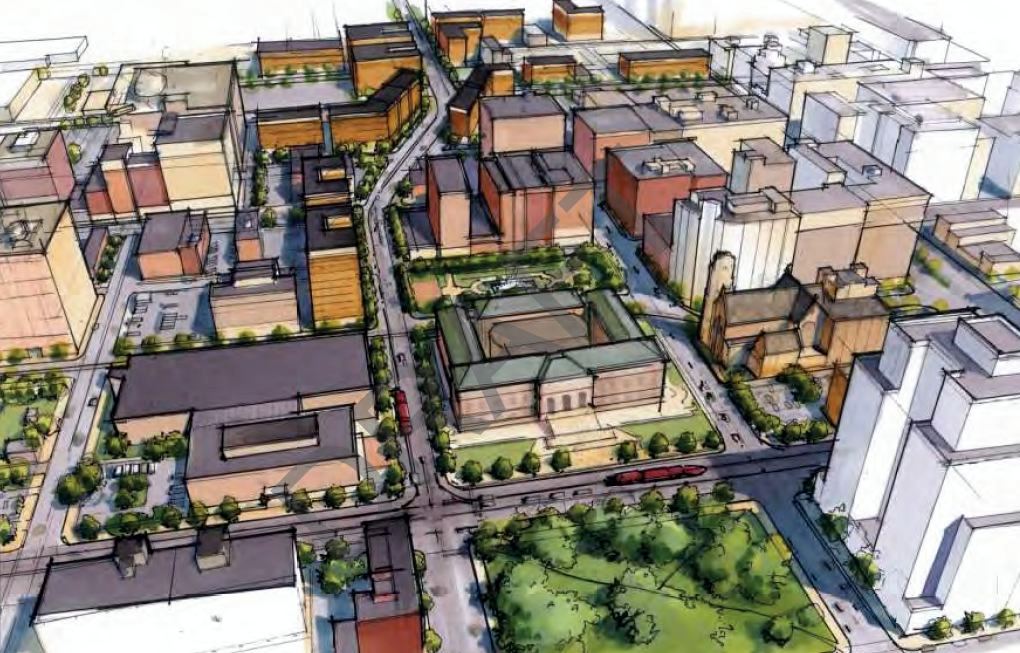 While it should be noted that the new line would duplicate some existing bus service, fixed rail transit is seen as a long term investment when real estate development decisions are being made. Bus routes can be changed on a whim. Moving a streetcar line is just a little harder. Projections for development along the streetcar lines in the first five years after opening are $540 million. Over twenty years, the line is expected to generate $2.1 billion in economic development. This could be a conservative number. Obvious points for development along the line are around the expanding Midtown Alley, Olive between Jefferson and 14th Street, and heading north out of Downtown. North Florissant between Old North and St. Louis Place in particular is and undeveloped natural commercial corridor that could flourish with the impetus of a streetcar.

There have been concerns that the north-south streetcar could impede the future development of the North-South MetroLink line. This is not the case since the track gauge would be the same for both. If MetroLink expansion occurs, the tracks can be utilized for light rail. With that said, many people would prefer the North-South expansion done as a streetcar instead of light rail. In that case, the line can simply be expanded, even in a piecemeal fashion. 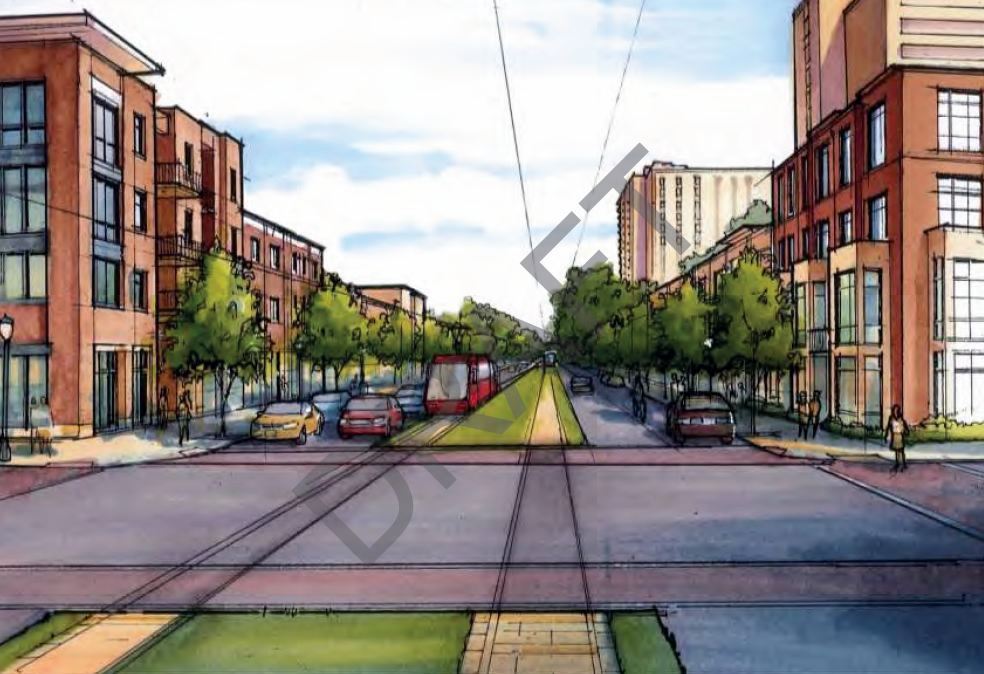 The proposed streetcar line could also form the spine of a much larger system. Imagine lines radiating out at roads such as Jefferson, Grand, Vandeventer, and Boyle. That could be the start of some real connectivity. The line could also theoretically connect to the soon to start construction Delmar Loop Streetcar.

Several funding sources have been proposed to build and operate the new streetcar. At the Federal level, the line can compete for Small Starts funds from the FTA. This could theoretically fund 50% of the project. Other Federal funding could come from Congestion Mitigations and Air Quality (CMAQ) funding. What is clear is that the line as planned cannot be broken down in to smaller segments to remain competitive for Small Starts funding. The overall line is greater than the sum of its parts.

At the local level, a Transportation Development District is proposed. The TDD would allow for property taxes or special assessments on the properties that benefit most from the proposed line. It is envisioned that this will cover the four blocks on either side of the route, and assessments would be smaller as property gets further away from the line. Residential could be assessed lower than commercial, and there could be a fee even on tax-exempt non-profit land along the route. This will be fleshed out more in future studies. At this point, no sales taxes are proposed, and the study has not considered funding from the State or Missouri based on lack of previous transit funding.

Operating expenses are estimated at $9.7- 10 million annually. This would be covered with a mix of fare-box revenue and TDD funds.

Up next comes a more in depth study and Environmental Assessment (EA). This will require a $300,000 local match, which the Partnership is working on raising now. It is not thought that a full Environmental Impact Statement will be needed for this project. East West Gateway will also need to adopt the streetcar project into the long range regional transportation plan so that streetcar will be eligible for Federal funding. The EA is projected to be completed in 2014. If everything moves quickly, the streetcar line could start construction as early as 2015 and open in 2016, though this may be a little aggressive. 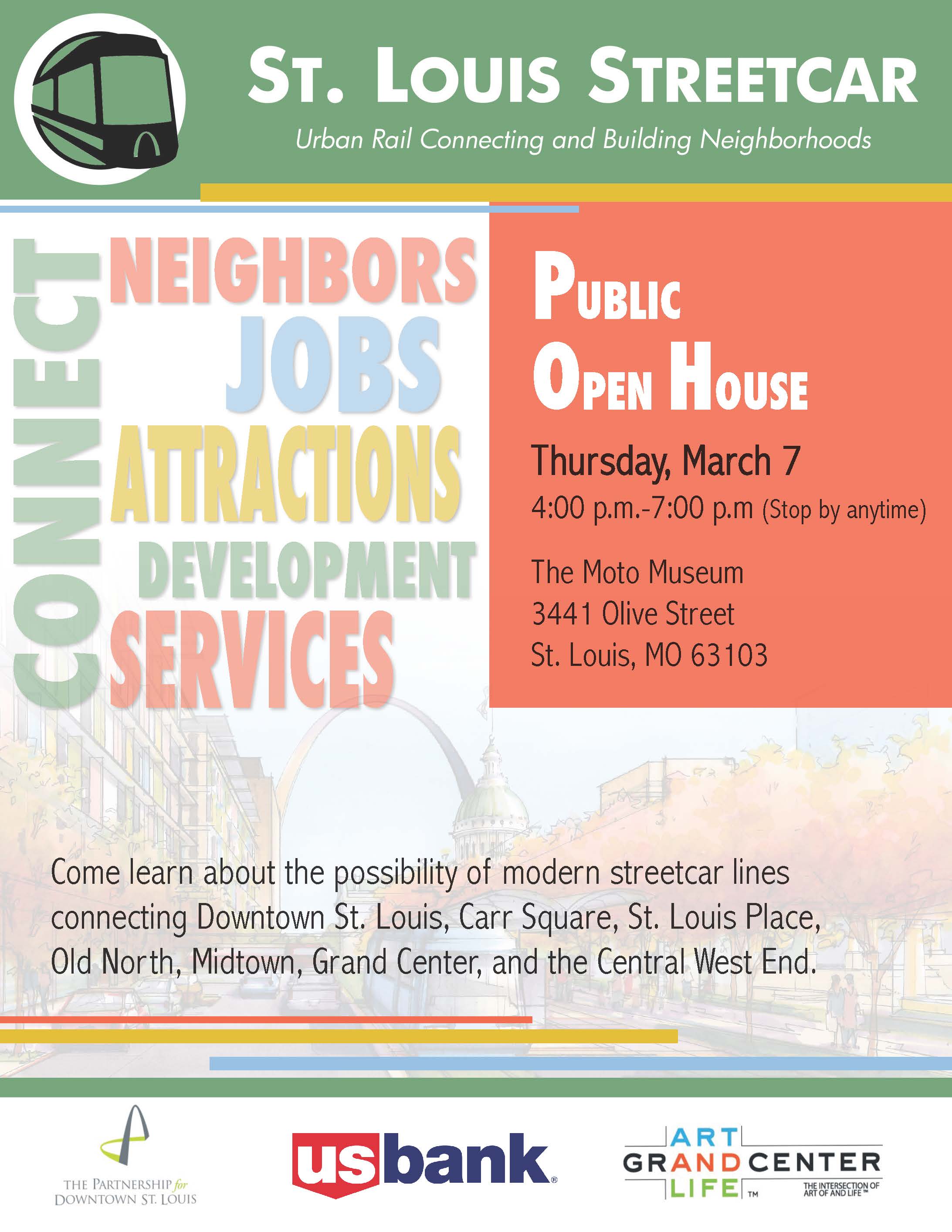