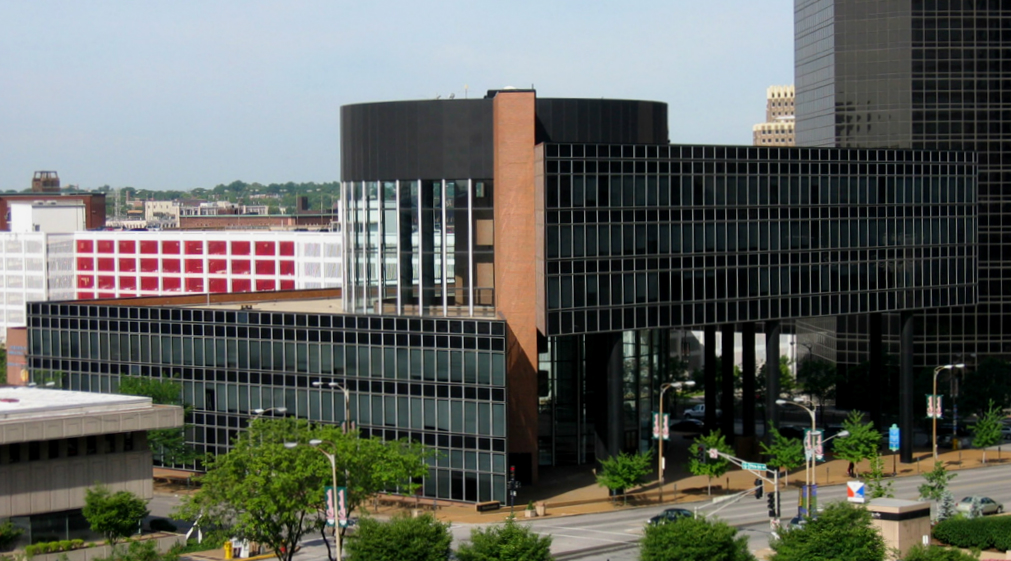 nextSTL.com has learned that Laclede Gas will select the Philip Johnson designed General American Life Building in downtown St. Louis as its next headquarters. Reached for comment, Laclede Gas confirmed publicly for the first time that they are considering the building, stating “Currently we are seriously considering three options, one of which is 700 Market.” nextSTL sources claim Laclede Gas will choose 700 Market and that a decision has likely already been made. No timeline for the move has been determined, but the lease on their current headquarters expires in 2015. Representatives from Centaur Properties were unavailable for comment.

Just three blocks south of their existing space , the GenAm building is an iconic Post Modern landmark along the Gateway Mall in downtown St. Louis and enjoys views of the Old Courthouse, the Arch, City Garden sculpture park, and, at least until Ballpark Village sees more construction, Busch Stadium. The building has sat empty since General American left for St. Louis County in 2004.

Design firm Arcturis, with offices in the Laclede Gas Building, has assisted in evaluating options. More than a half-dozen options downtown and elsewhere in the city have been explored. In May, Laclede Gas seemed to rule out CORTEX as the site of a new headquarters, telling the Post-Dispatch, “at this time, our property at Sarah (Street) and Forest Park is a very unlikely option for our headquarters.” There are big plans for this part of CORTEX regardless of specific retailers, but nextSTL has previously written that we believe it will be big and blue. 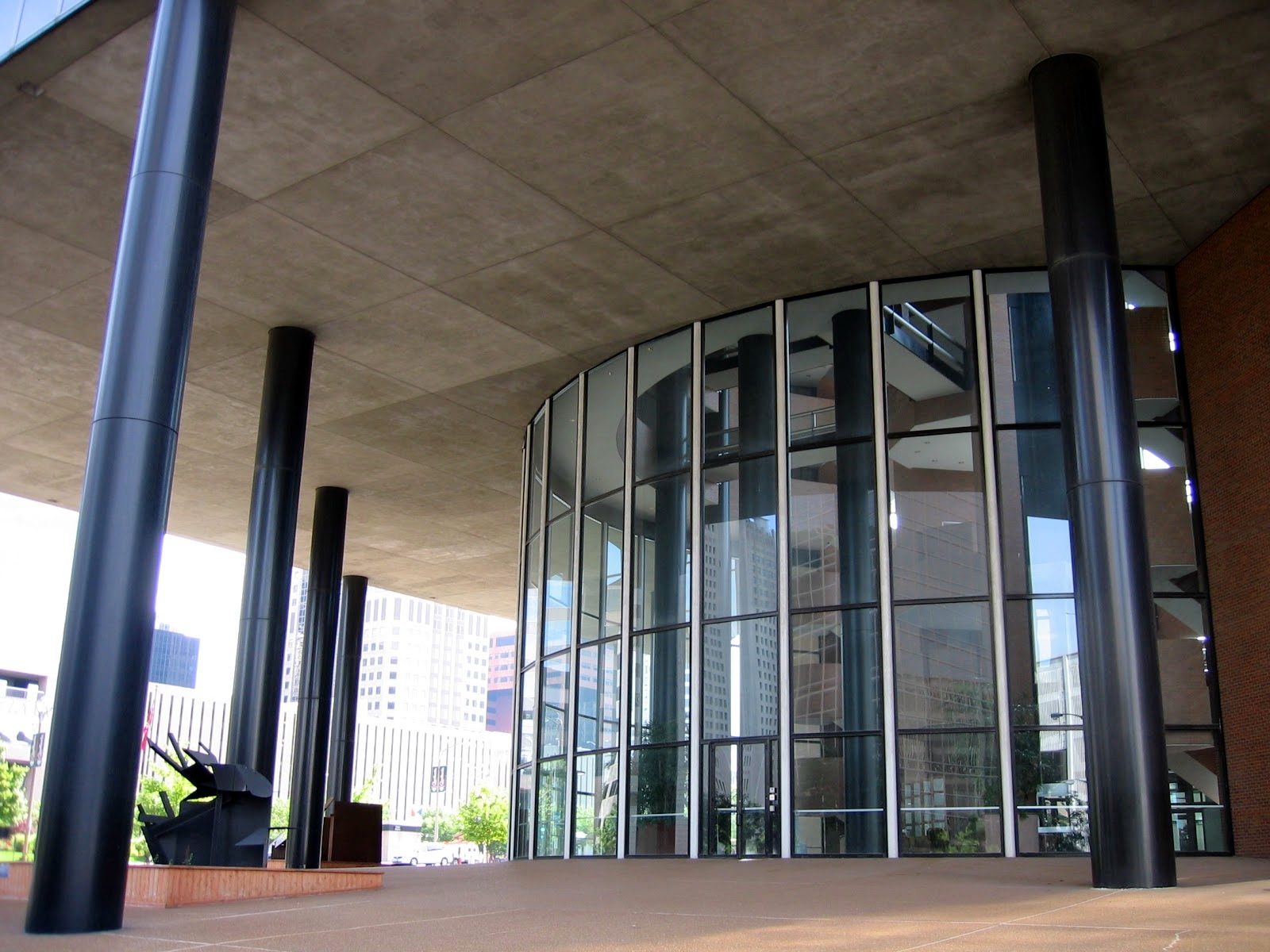 Laclede Gas currently occupies approximately 120,000 square feet across nine floors in their current location at 720 Olive Street, the company’s home since 1970. Laclede Gas has reportedly not been looking to expand its footprint with the possible move, looking for a roughly equivalent space for its 450 employees. 700 Market is listed at 128,550 sf. 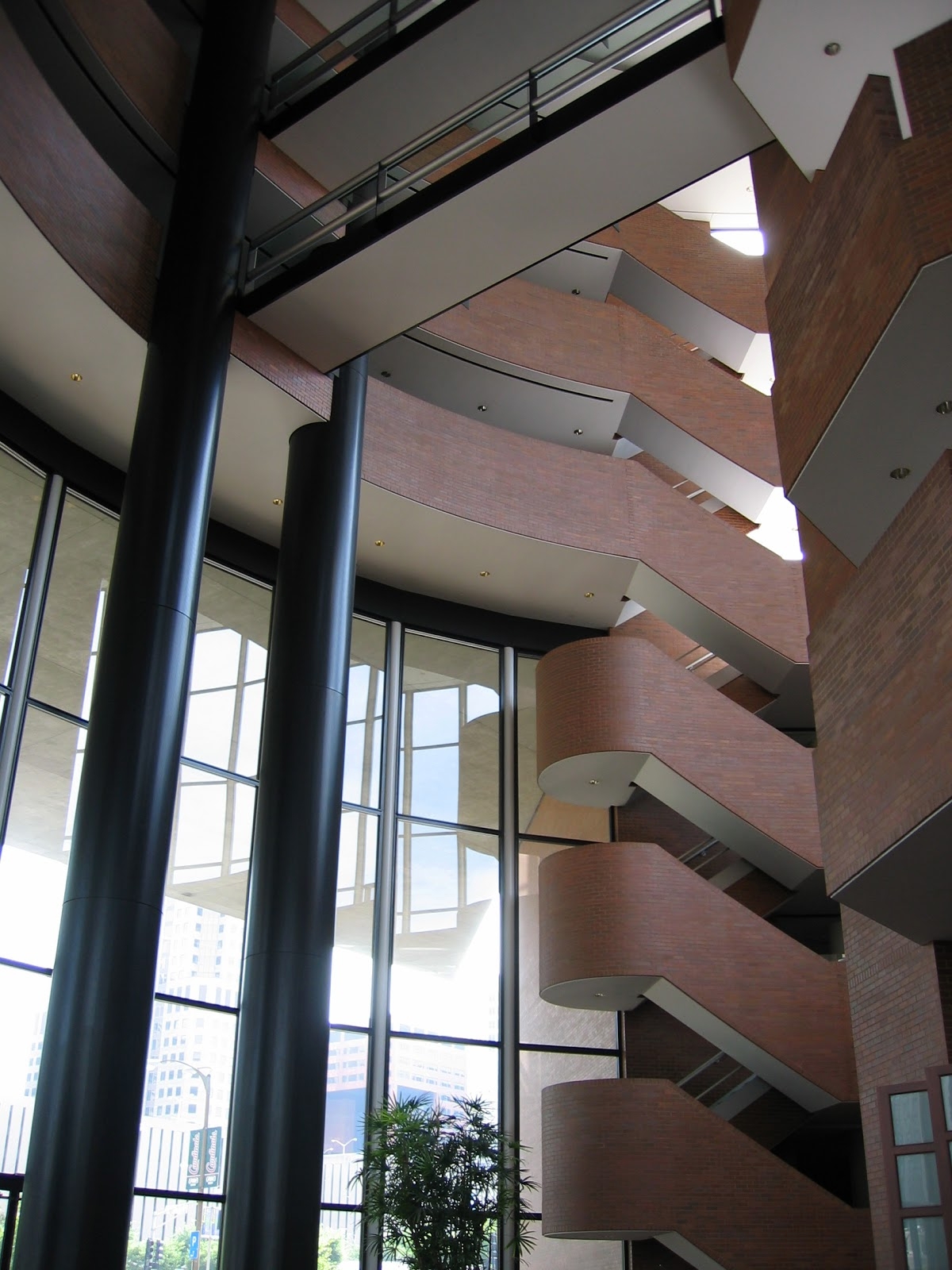 The building may be a Post Modern icon, but it also presents a very challenging space due to the design. In essence, Johnson produced a plain glass box, then sliced it on the diagonal and lifted one half three stories and connected the two with a massive circular atrium. In this way, the building’s stature is much greater than its size.

The building was purchased by Centaur Properties of New York in 2005 for $6.1 million. According to the Post-Dispatch, Centaur claimed to have a $10 million renovation plan in place in 2010 to help attract potential tenants. That investment never occurred. The building has been most recently listed with an asking price of $9.8M.

There have been some close calls. More than one law firm has considered moving in, with Blackwell Sanders coming nearest to signing on the dotted line. Soon after passing, the firm merged with Husch & Eppenberger and is now located in Clayton as Husch Blackwell. (lobby image by John Warren}

The National Register of Historic Places nomination, prepared by Melinda Winchester, may best explain the history and value of the GenAm building:

The GenAm bulding stands as an excellent example of one of St. Louis’s Modern designs with Post Modern geometric elements, and is a unique representation of the Modern Movement for St. Louis during a period of image revitalization.

The building consists of a three-story cube that has been bisected into two triangular pieces with the northwest portion raised forty-five feet above ground level on  a grid of ten circular structural columns. A top-lit glass cylindrical rotunda connects the two triangular halves with a portico in the lower portion. 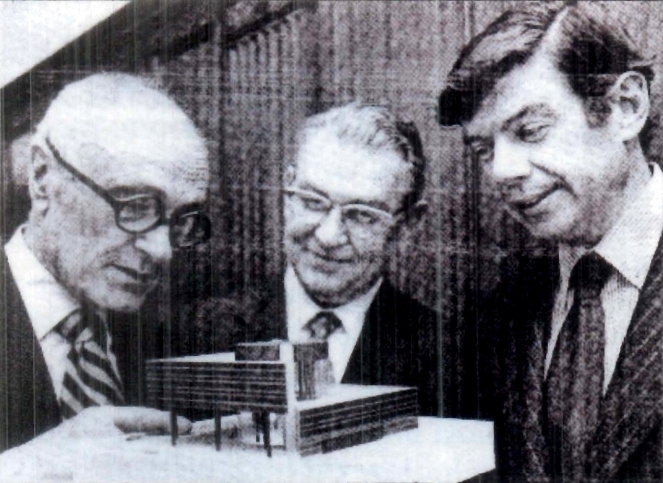 The selection of Johnson/Burgee as architects for the headquarters was a deliberate statement about the kind of building General American wanted. Philip Johnson and John Burgee had developed a strong architectural presence and were developing a philosophy that proved parts of architectural theory to be contradictory.

St. Louis, like many American cities, experienced a dearth of new construction in its central business district during the economic depression of the 1930s. However, a massive urban redevelopment project under federal sponsorship was under way by the late 1930s. In the name of removing “blight,” 37 blocks of amazingly intact historic buildings were demolished on the St. Louis riverfront, an area comprising the city’s former commercial district.

Twenty- five years later in 1964 the New York Times critic Ada Louise Huxtable observed that the on-going search for a ‘new’ St. Louis through demolition had developed into “a city that has virtually torn itself apart to rebuild itself in a new image…a city that has more shapeless bulldozed open space and more ambitious and debatable plans for renewal than almost any other in the country

The General American project further offered the smaller type of building the partners believed permitted the development of more interesting designs. As Johnson remarked, “a three-story building would have looked like an army barracks on this site,” alluding to General American’s unusual use of split-level triangles (one triangle raised on columns to a height of six-stories)

In the years following the completion of Johnson/Burgee’s avant-garde General American Life headquarters, new construction in downtown St. Louis produced no further evidence of outstanding innovation. Paul Goldberger, senior architecture critic for The New York Times, on a visit to St. Louis in 1983 summed up the post-Johnson/Burgee construction: “Almost all of the recent architecture in the city’s downtown is undistinguished, high-rise buildings that could be anywhere.”