Let’s continue our journey along the Loop Trolley corridor with the section of Delmar from DeBaliviere to Des Peres. See the first installment: DeBaliviere.

This section of Delmar is most stroad-like, prioritizing level of service for cars, yet with too many curb cuts to count. The Everly looms in the distance 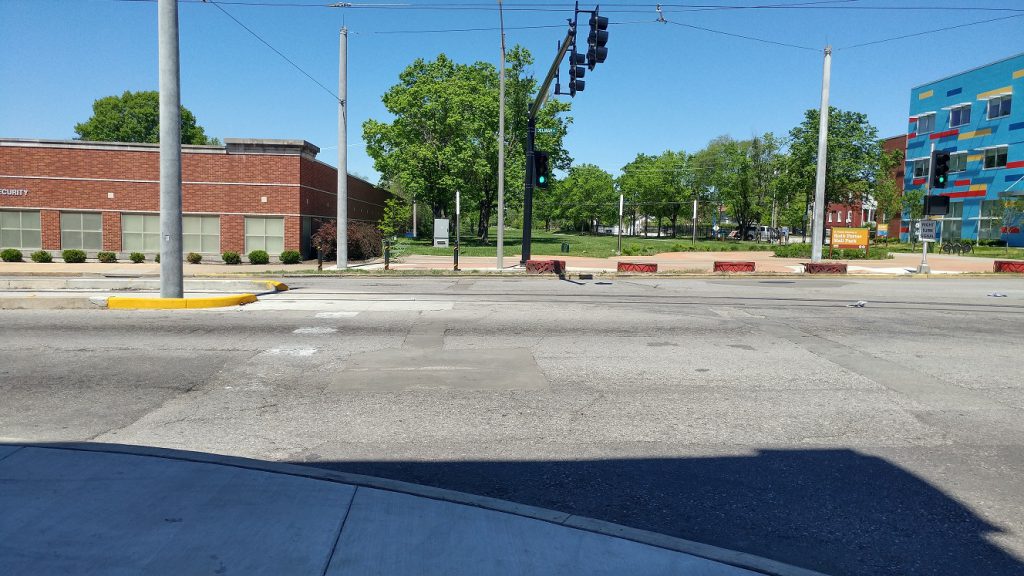 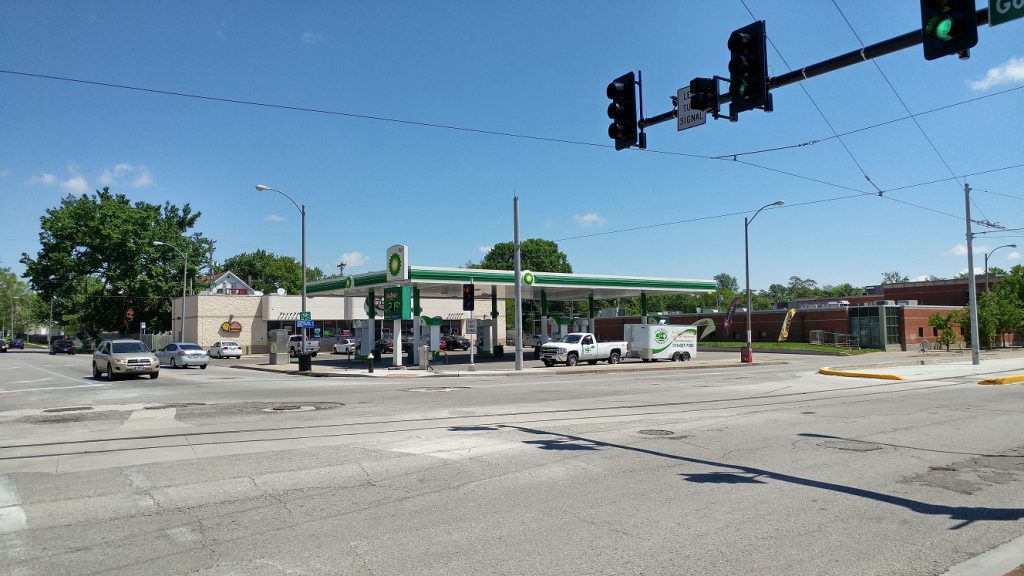 BP gas station at Goodfellow. It was rebuilt a few years ago. 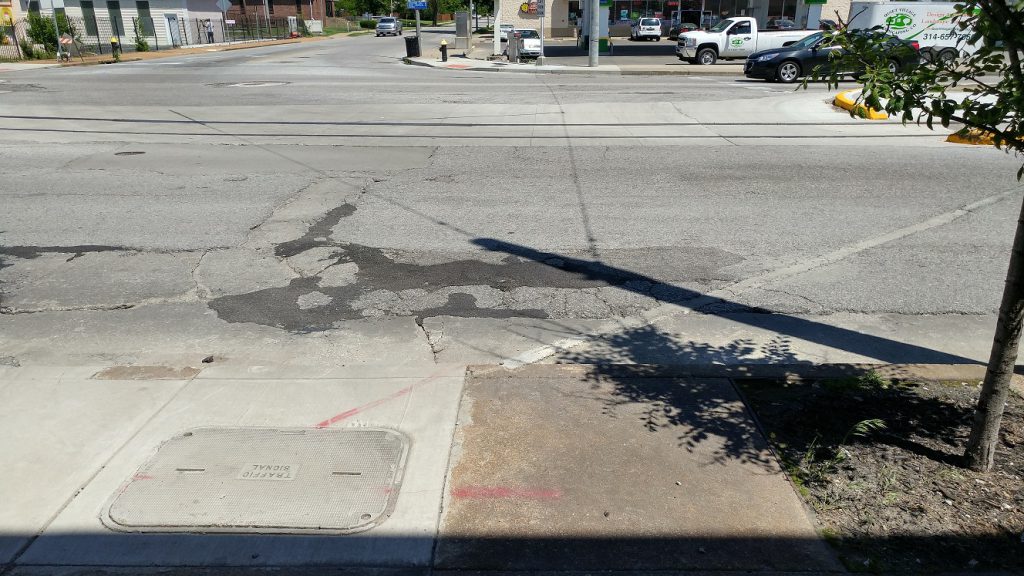 Redevelopment opportunity at this low-productivity auto-oriented land use on the northwest corner of Goodfellow and Delmar. It’s owned by someone in a little town in Tennessee and two years behind on taxes. My dream would be a 3-4 story building with a hardware store on the ground floor.

5835 Delmar, owned by the same company as the empty lot next door, could use some sprucing-up. 5841 to the left is owned by someone in St. Charles. 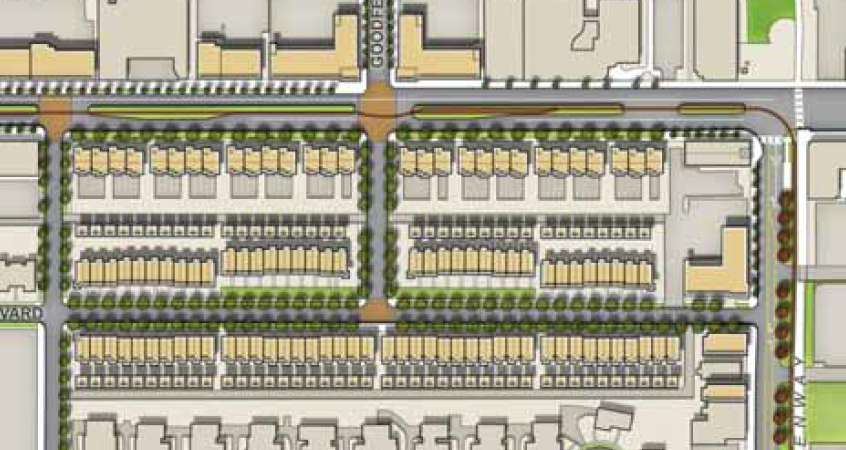 {H3 Studio} The Skinker DeBaliviere Neighborhood Plan shows the possibility of the garage being redeveloped.

The infamous History Museum lot. This may be the most appropriate place for structured parking similar to the garage across from the Tivoli. 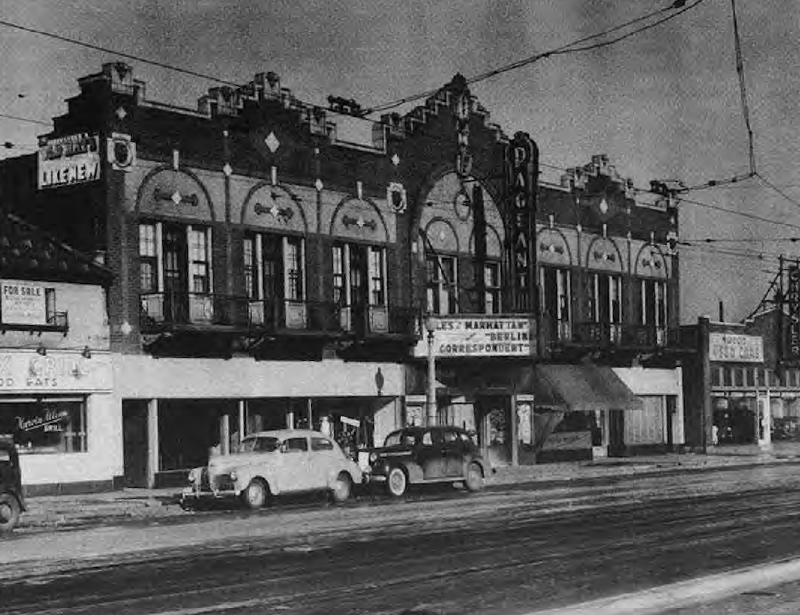 The Pageant Theater used to be at 5855 Delmar

The south side of the 5800 block of Delmar is complete. Laurel St. connects to Delmar. It is the only open street from Skinker DeBaliviere to Delmar. Though one-way towards Delmar, drivers often use it to go south.

The Alanson at Delmar and Hamilton 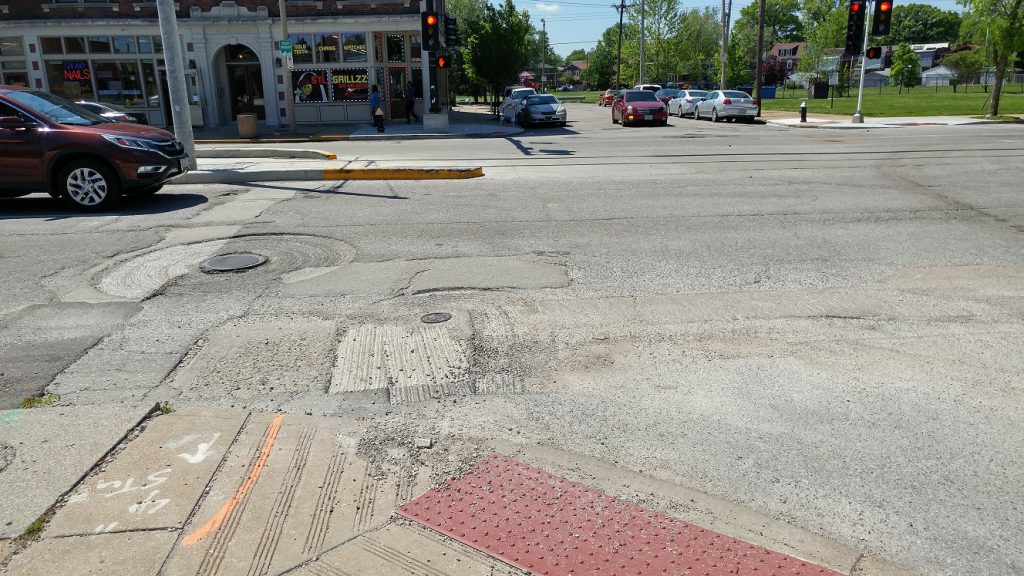 The crosswalk on the East side of Hamilton at Delmar… 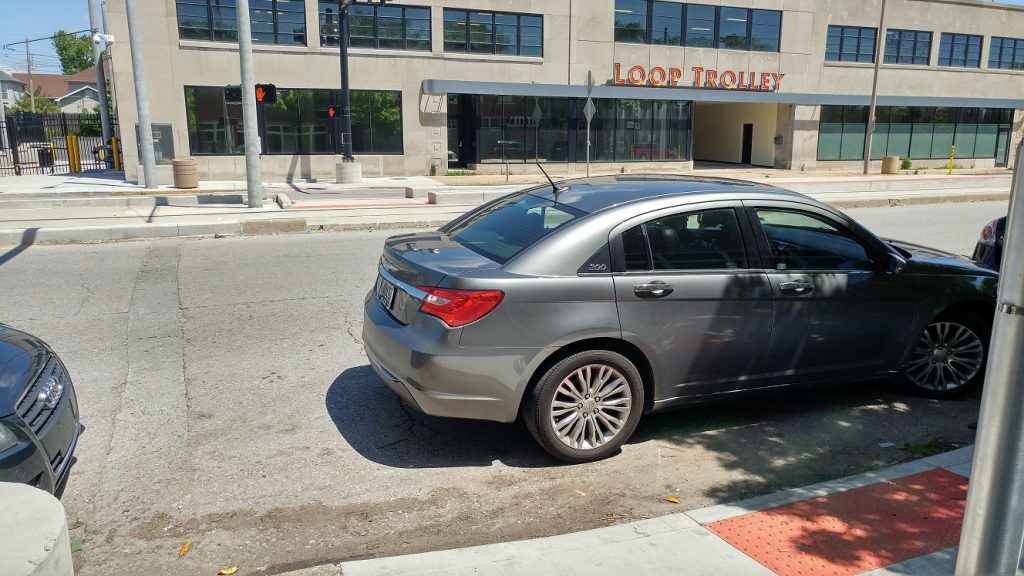 Has been combined with the Trolley stop. Hopefully after repaving and striping drivers will resist storing their cars here. 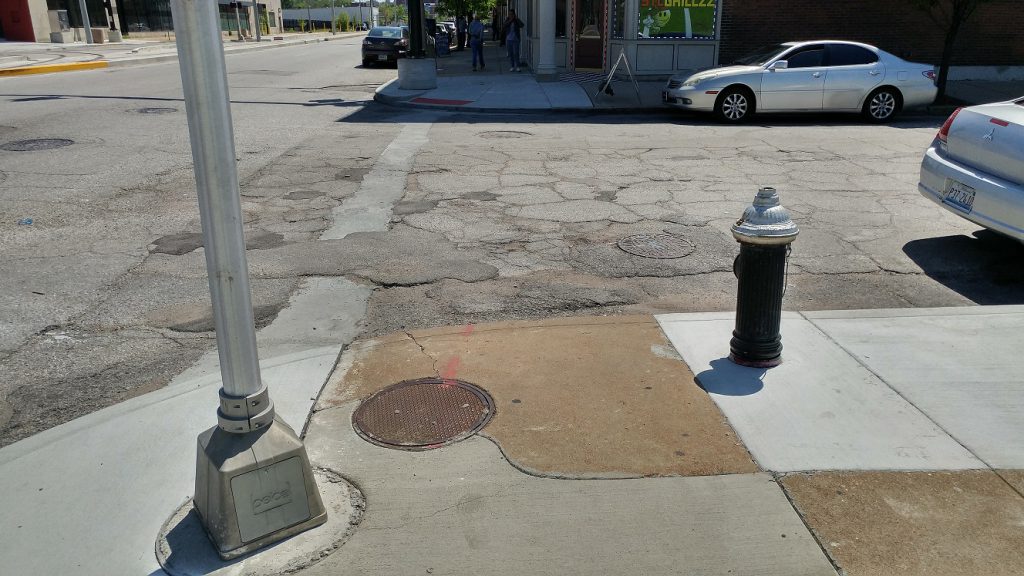 Awkward crosswalk on the south side of Delmar and Hamilton

The Gotham Annex on the northwest corner of Delmar and Hamilton 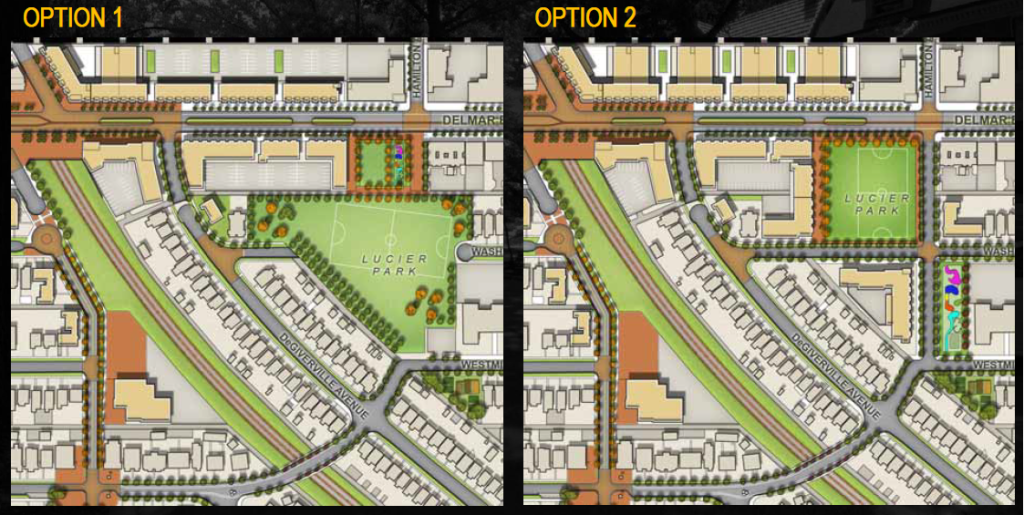 The Skinker DeBaliviere Neighborhood Plan shows options for enhancing Lucier Park. Option 2, which would reconnect Hamilton and Washington, would be great. It’s a tough lift as it would require a vote of the entire city.

Development opportunity at 5900 Delmar, though I’d rather it become part of a reconfigured Lucier Park. 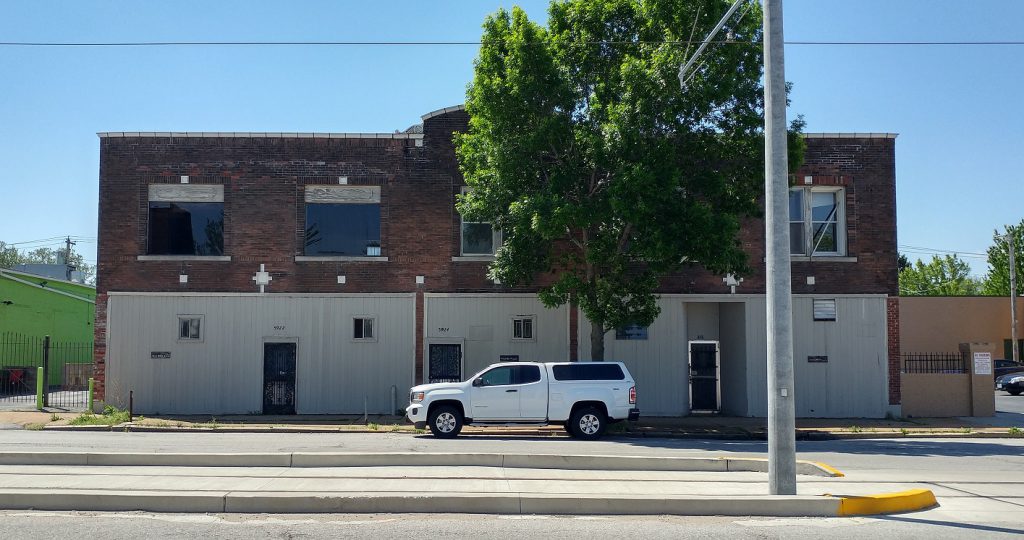 Development opportunity at the corner of Delmar and DeGiverville

DeGiverville is blocked at the alley. 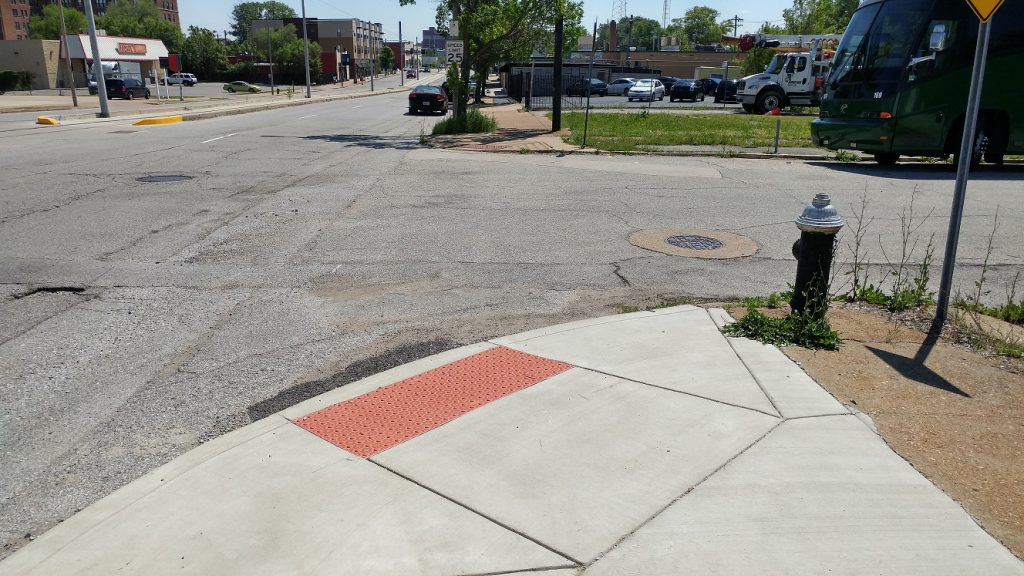 Awkward crosswalk on the south side of Delmar and DeGiverville. Why put curb cuts at the corner which spits you into the intersection instead of in the direction of travel?

Redevelopment opportunity at this low-productivity auto-oriented land use at 5989 Delmar. What happened to the bus shelter?

No left turn from EB Delmar to Hodiamont nor SB Hodiamont to Delmar, though I did once see a semi go the wrong way on Delmar until it could access the EB lanes a bit to the east.

Delmar looking east near DeGiverville. The Skinker DeBaliviere Neighborhood Plan calls for a road diet for Delmar from Des Peres to Goodfellow. That would be welcome.

{H3 Studio} The Skinker DeBaliviere Neighborhood Plan shows the station becoming the entrance tot he Metrolink Station as well as access from the south side of Delmar. Maybe someday. 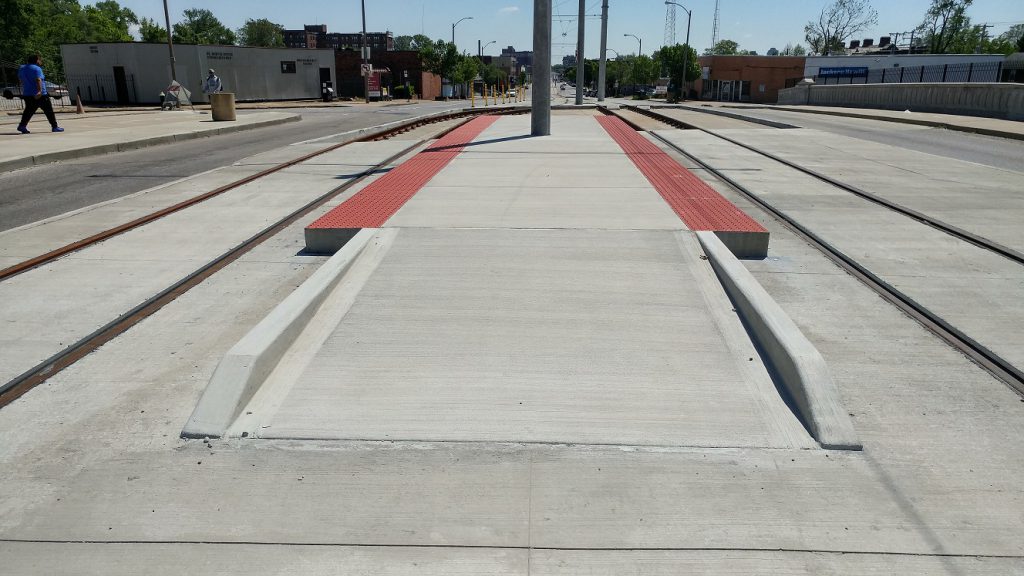 The Trolley stop at Wabash Station 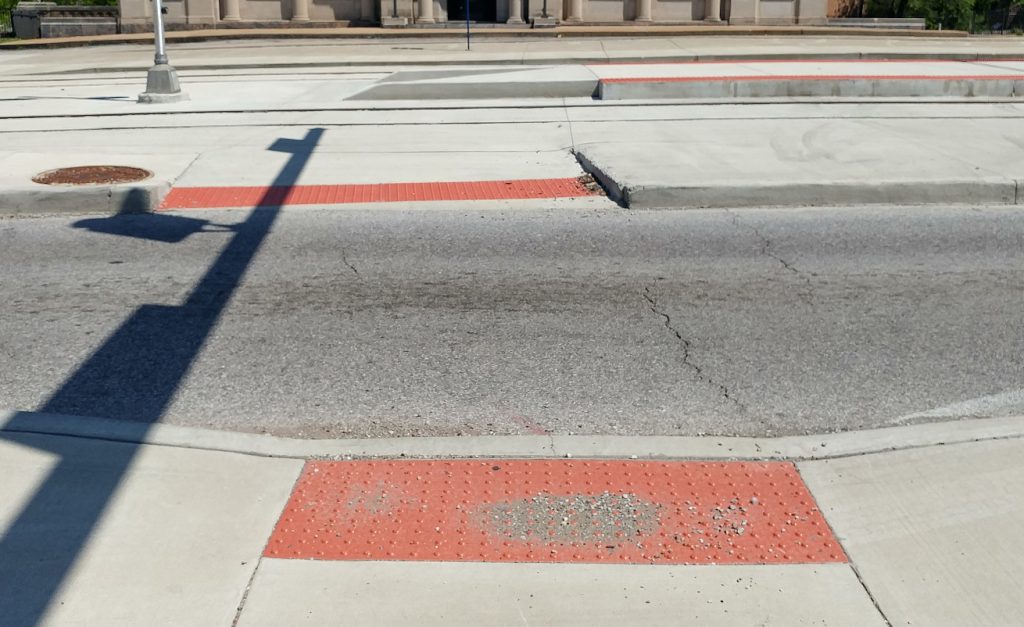 The pavement along this stretch is beat to hell. Repaving is imminent. I plan to take photos of the result. Also the corridor is riddled with litter, weeds, and debris on the street and on sidewalks. This needs to be addressed. 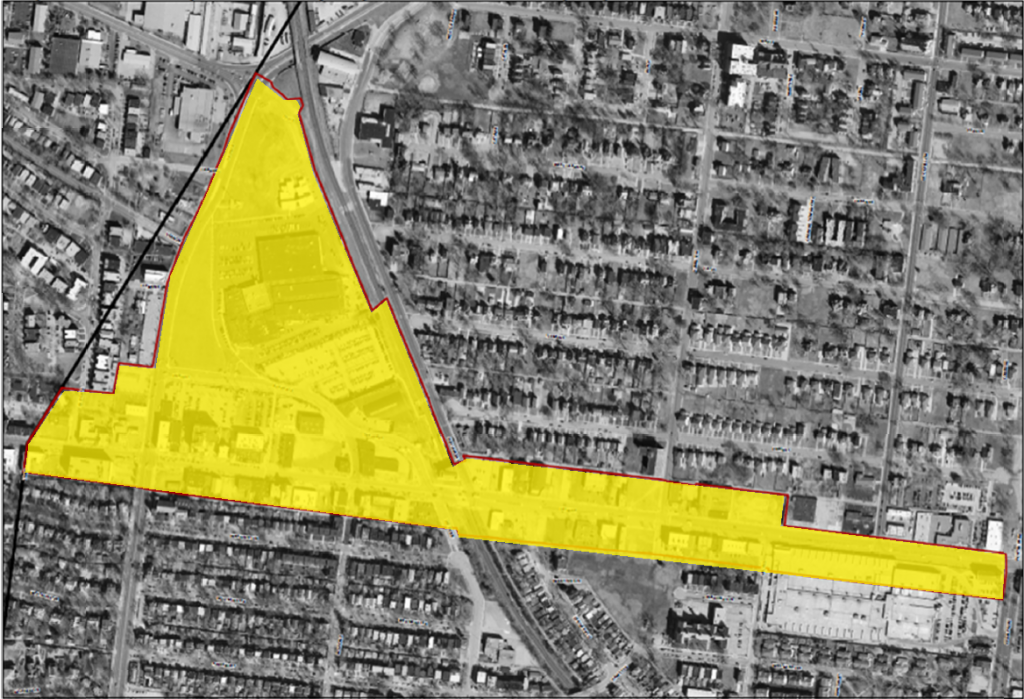 The East Loop CID was created last year to address those issues and further efforts to enhance the area. It’s funded through an assessment based on square footage of land, square footage of building (upper stories are at a lower rate). See an article in the Times of Skinker DeBaliviere for more (Page 6). 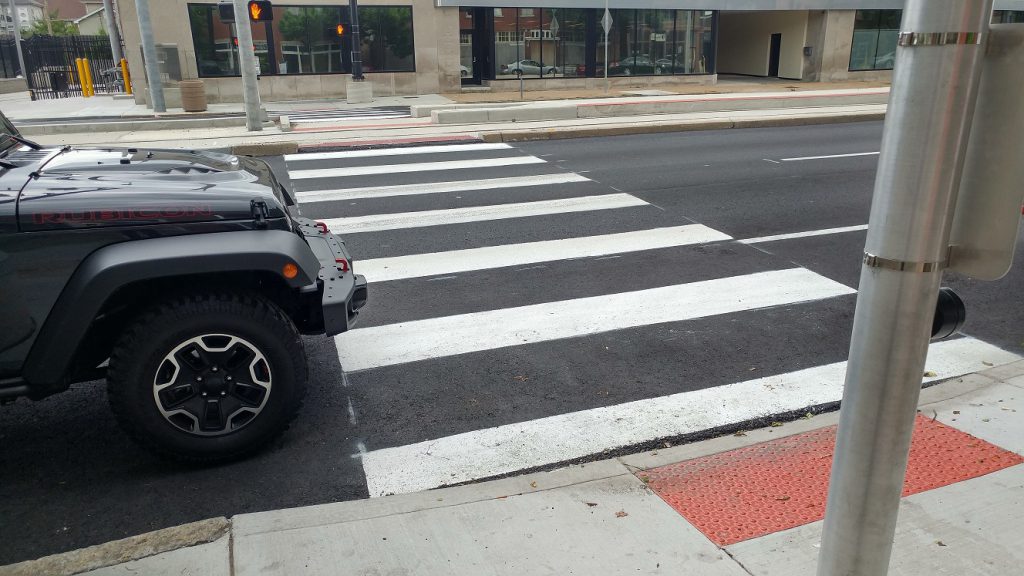 It appears striping has helped to keep drivers form parking in the crosswalk. There is about 925 feet between this crosswalk and the one at Goodfellow. If development picks up one should be added at Laurel.