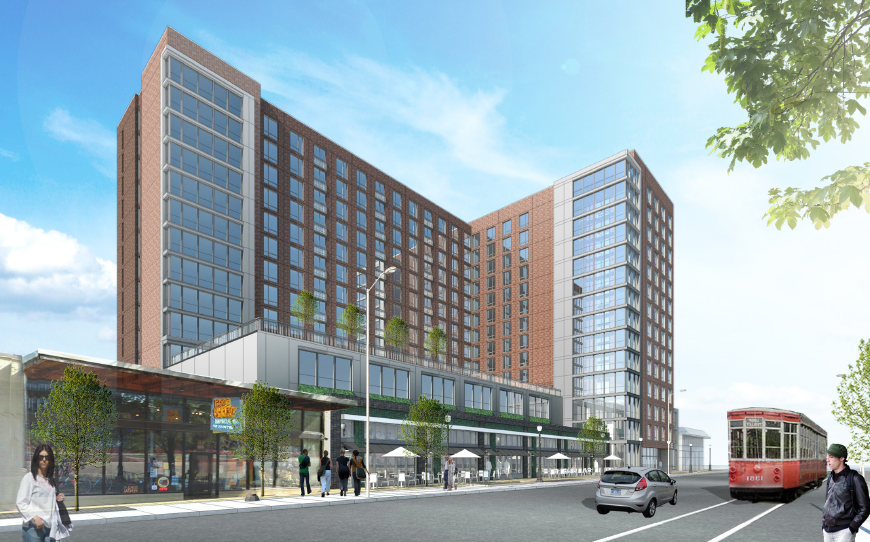 It’s full steam ahead for Clayco’s 14-story apartment building at 6105 Delmar in the East Loop. A board bill for tax abatement will be introduced at the City of St. Louis Board of Aldermen this Friday. A zoning variance will be considered next week. If all goes well, the project is aiming for a spring groundbreaking.

The building is planned as a reinforced concrete structure with 209 apartments and 4,500 square feet of ground-level commercial space. The bedroom mix includes 65 – 1BD/1BA, 87 – 2BD/2BA, and 57 – 3BD/3BA units, a total of 410 bedrooms. Leveraging the region’s significant nearby transit investments, the project proposes 211 spaces within a structured garage plus 150 dedicated bicycle spaces. Some of that parking may be reserved for retail managers. There will be no parking reserved for retail employees or shoppers.

The relatively modest amount of parking is an important leap forward for St. Louis, where so much has been lost in the effort to build places for cars first. By insisting on parking we’ve driven up the barriers to entry for small business, raised rents to pay for parking infrastructure, added to stormwater runoff, and devoted a lot of land to low-productivity uses. The project is seeking tax abatement of 100% for 10 years plus six years at 50%. A quick estimate of the abatement’s value yields ~$60M building x .19 (multiplier for residential, I’ll ignore the bit of commercial for convenience) x .07585 (The total property tax rate in the city) = $864.690/year x (10 x 1 + 6 x .5)(assuming the building appreciates at least with inflation) = $11.2M / 60M = 18.7%. This means the project would not immediately increase revenue to the St. Louis Public Schools, which receives about 4/7 of property taxes (which may increase by 0.75 if voter’s pass Prop 1 on this year’s April 5 ballot). City revenues may increase with sales tax from the building’s commercial space, and the city’s 1% earnings tax on retail employees and residents, if new to the city.

For comparison, the Opus project at Lindell and Euclid was granted an abatement of 10 years at 100% plus five years at 50%. The developer added another level of underground parking at the insistence of neighbors expressing concerns about parking. The added underground parking level added a couple million dollars to that project, which still moved forward. Despite the lower rents of The Loop building compared to that high-end Central West End project, there may be some room for the city to push back on abatement. In either case, the city appears set to gain a highly productive land use for many decades to come in contrast to easily abandoned big box stores and large surface parking that often receive subsidies in the region.

The project represents a big investment in the block, neighborhood, and city. In contrast to Loop developer Joe Edward’s long and challenging ordeal to secure financing for the Pageant concert venue in the late 1990s, this project appears to have financing lined up and is in a hurry to break ground, which may happen as early as this April. Clayco’s proposal represents validation of the long and many efforts put into this part of Delmar by the private and public sector. The new residents may activate the remaining vacant properties on the 6000 and 6100 blocks of Delmar. The area simply needs more people. The current housing stock and new wide-lot single-family houses in the West End neighborhood haven’t been, and won’t be, enough. This project could keep the dominoes falling east on Delmar akin to what’s happening on Euclid in the city’s Central West End, where mixed use projects are filling surface parking lots and replacing outdated buildings.

This is the type of project hoped for and needed to leverage nearby transit assets. MetroLink Red Line and four bus lines meet at the Delmar station less than a block to the east. Mass transit can support more productive land uses. The St. Louis region’s track record at leveraging transit with transit-oriented development (TOD) has been poor. This could increase interest in more TOD. Also more people using the Delmar MetroLink station will enhance security there.

But of course there’s opposition. The complaints and fears are as familiar as they are silly. The building is too big, some trees (ones that are inappropriate for an urban street) will be lost, every resident will own at least one car and traffic will be terrible, the project will add to the “Delmar Divide”… In one view these concerns are valid opinions, but they are also misplaced, misunderstand the development, and are rooted in a view that would keep The Loop and city from encouraging sustainable development.

There simply cannot be high utilization of the region’s investment in transit, or a vibrant local retail, restaurant, and event corridor without more residents. In fact, the one thing guaranteed to generate more traffic is more parking. Limited parking encourages more residential development and the use of varied forms of transportation, including walking, biking, buses, trains, and here, the Loop Trolley. This project has the potential to set a new expectation for urban infill development. The current tallest building in The Loop is the 14-story Parkview Apartments on Westgate just north of Delmar in the West Loop: