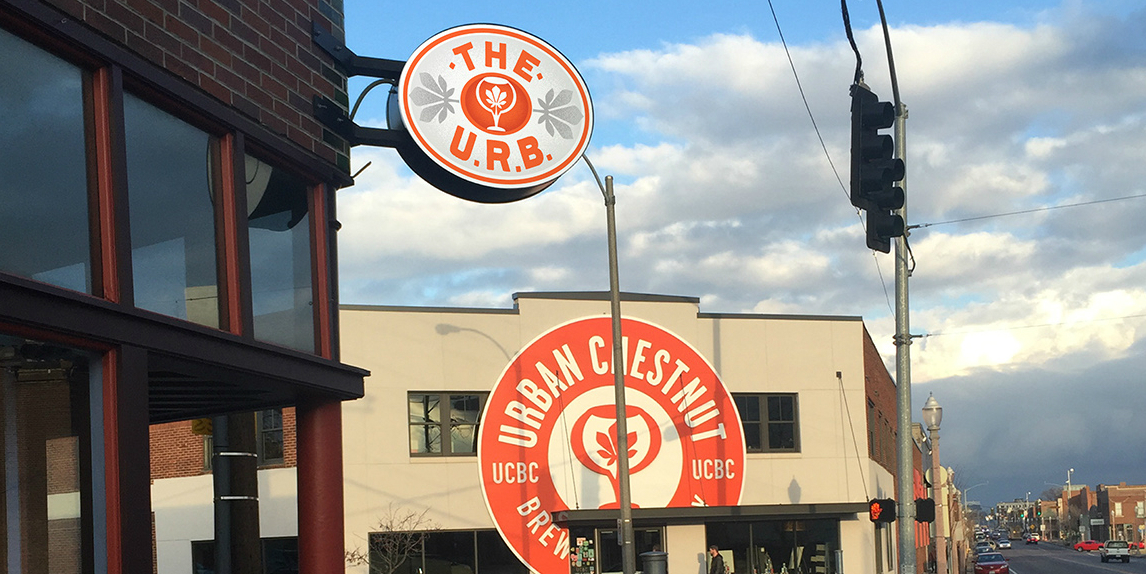 Urban Chestnut Brewing Company (UCBC) is announcing today that it will be opening a new brewery in The Grove. The Urban Research Brewery (The U.R.B.) will be focused on consumer research, offering flights of four 2oz samples of the latest experimental brews for $1.

The U.R.B. will occupy 3,500 sf immediately across Taylor Avenue at 4501 Manchester from the UCBC Grove Brewery & Bier Hall. The new brewery will have its own 2 bbl pilot brewery occupying the central space, with a consumer research bar area and small pizza-by-the slice counter on either side.

The space at 4501 has been vacant since Joyia Tapas closed in April of last year. That effort lasted nearly a year and a half and followed at least two other restaurants that experienced short runs at the location.

A true research brewery, The U.R.B. will ask consumers to provide instantaneous feedback on test beers using a cell phone, tablet, or other smart device. As UCBC has grown rapidly over the past four years, Co-Founder & Brewmaster Florian Kuplent has wanted to find a way to gain more feedback.

“Two things our brewers have never been able to effectively do: 1.) brew small test batches and 2.) interact directly with beer drinkers regarding experimental beers”, Kuplent says. “Having a small pilot brewery adjacent to our production brewery will provide our brewers the ability to create, research, and develop new beers that may ultimately end up in the UCBC portfolio.”

The brewery will cater to beer enthusiasts, but also aims to be a comfortable place to hang out. After sampling test beers, patrons will be able to purchase a standard pour, depending on supply, as well as other UCBC beers.

The two existing UCBC locations in St. Louis are frequently packed with beer drinkers and host large events such as Wolpertinger, an annual celebration of beer, being held January 24th this year at the Grove location. The U.R.B. will give the brewery the option to do smaller events.

UCBC opened in January 2011 in an 8,000 sf renovated service station in the city’s Midtown neighborhood. Just more than two years later, the effort by the former Anheuser-Busch employees expanded in a big way, opening the 67K sf bier hall in The Grove. {The U.R.B. will be located across from UCBC at the western end of The Grove}

The larger brewing facility in The Grove has quickly become a destination, something Brooks Goedeker, Executive Director of Park Central Development Corporation, celebrates.

“The Grove has quickly become one of the region’s premier food and entertainment destinations. The Urban Chestnut Bierhall and the new U.R.B. facility will solidify this for years to come,” Goedecker said. “It is great to see the Grove’s visitors walking up and down the district and partaking in several businesses every time they come to The Grove.”

The area’s early identity may have been 3a.m. bars, but what’s emerging is a mix of national and regional destinations, along with a wide range of restaurants, more professional offices, and a significant number of longtime businesses.

It’s not uncommon to see a tour bus and lines out the door at Sweetie Pies, made famous by the reality TV show “Welcome to Sweetie Pies”. People take photos of each other outside UCBC. Dozens of people sitting on the sidewalk outside the Ready Room to attend a show is a weekly occurrence.

And the retail growth appears to be going hand-in-hand with residential growth. A custom contemporary home recently sold for $750K and new infill is moving at $400K. Residential development is expected to pick up with infill south of Manchester, and development of the large Commerce Bank lot coming soon. For existing businesses, The U.R.B is more good news. “Since opening the new brewery in 2014 UCBC has been a great neighbor and supporter of The Grove. This project shows their ongoing commitment to the neighborhood and will continue the momentum of The Grove towards being the funnest and most welcoming area in St Louis,” said Roo Yawitz, owner of The Gramophone. “Plus the beer is gonna be awesome.” Kuplent and Wolfe both spent time at Anheuser-Busch in St. Louis before co-founding UCBC. The brewery is known for its modern American beers (Revolution series) and classically-crafted European styles (Reverence series). UCBC operates a third brewery, Urban Chestnut Hallertauer Brauerei, in the Hallertau region of Bavaria, where it brews its Hallertauer Serie, small batches of locally sourced, Bavarian bier.

UCBC is leasing the space at 4501 Manchester from Restoration St. Louis, a St. Louis based real estate developer who’s been very active in development of The Grove, aka Forest Park Southeast neighborhood. Restoration St. Louis just announced it will restore the Adler & Sullivan designed 705 Olive Building in downtown St. Louis as a boutique hotel. The U.R.B. is being designed by Space Architecture + Design, also located in The Grove.

The new brewery’s launch date is pending delivery of specialized brewing equipment from a European manufacturer, and on federal and local licensing, both of which are expected to be finalized this spring.