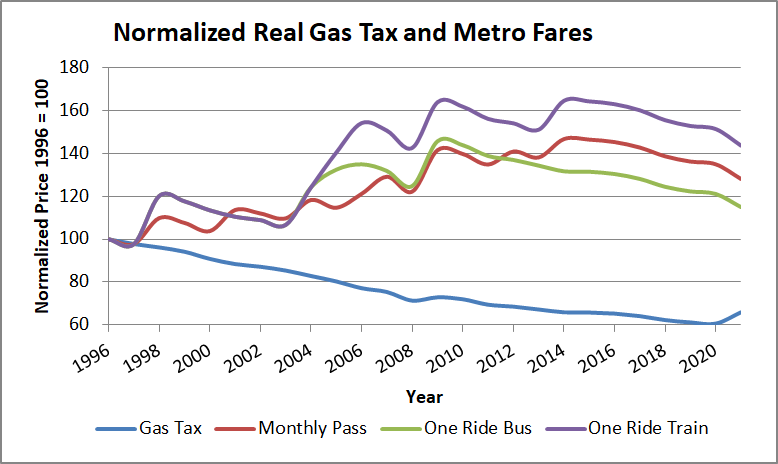 NextSTl – In Missouri, It’s Time for Yet Another Gas Tax Cut

Since the last fuel tax increase in 1996, it had stayed fixed at 17 cents per gallon. Its buying power is eroded over time by inflation. Fuel buyers also escape the ever increasing sales tax. As I have noted over the years, transit users have seen their fares not only keep up with inflation, but outpace it.

Until the increase last year, fuel buyers had received a tax cut of nearly 40% since 1996. That 17 cents in 1996 is worth 29.5 cents today. Coincidently that’s what it will be once the latest increase is fully implemented in 2025. Even with the new tax increase, the buying power of the fuel tax won’t equal what it was in 1996.

Drivers (including non-Missouri residents and businesses so long as the fuel was used in a motor vehicle of less than 26,000 lbs.) may file for a refund on the fuel tax increase. For 10,000 miles driven at 20 miles per gallon, means 500 gallons combusted, assuming they were all purchased in Missouri, times 2.5 cents equals $12.50 in potential refund.

Fuel purchases in Missouri decreased 6% in 2020 and rebounded to 2019 levels in 2021. Luckily for MoDOT the pandemic didn’t lead to a long-lasting drop, and its prediction in 2014 of ever-declining fuel purchases has not come to pass.

Car and fuel prices have been increasing recently. In the case of gasoline, it has doubled in the St. Louis region since the pandemic lock-down bottom in April 2020 to prices un-seen for 10 years (though the $4 per gallon in April 2012 would be $4.89 today).

Some state legislators have introduced bills to address the rising price of gasoline.

HB2801 – Schwadron – would create a tax holiday for all of the state’s fuel tax for six months.

The first bill would only cut the current tax by 2.5 cents. Not much relief. Meanwhile the state’s mounting road liabilities that it can’t keep up with under current fuel tax levels wouldn’t go away. Maybe they’re thinking that the Federal pandemic relief and infrastructure bills will fill the gap.

The second bill would provide about $50 in tax relief for someone purchasing 250 gallons of gas over six months (10,000 miles per year / 20 mpg / 2 * $0.195). The state’s road fund would lose about $400M in revenue. Again the state’s long list of deferred maintenance wouldn’t go away for six months.

The state produced 75 barrels of oil per day in 2020. A refinery makes about 20 gallons of gasoline from a barrel of oil, so 1,500 gal per day or about 550,000 gallons per year. The state imports a net 99.9868% of its gasoline. Missouri has no oil refineries. Most of the wealth spent on gasoline leaves the state.

Now Missourians are even more captive to fuel price volatility exacerbated this time by the double-whammy of vehicle price increases. Consider if the state had a policy of promoting the freedom of travel by other, cheaper modes. In the face of price spikes, when there are practical substitutes, one could choose another mode.

Instead the state continued to promote the spreading out of places big and small (Metropolitan Planning Organizations (MPOs) and localities are quite complicit of course) rendering choices less and less practical. The state continued its anemic funding of transit. They couldn’t even keep funding a two-a-day Amtrak service between St. Louis and Kansas City. Your trip to work or wherever is only a concern for the state if it is by car.

There are some bills that might help in the long term.

HJR120 – Merideth – would put before voters a constitutional amendment that would allow localities to spend funds from an optional local fuel tax on public transportation and school transportation and change the bar to pass one to a simple majority (currently it’s 2/3).

HB1526 – Ellebracht – would create a $1,000 tax credit for the purchase of an electric vehicle. It would sunset after six years.

HB2756 – McCreery – would create a $2,500 tax credit for the purchase of electric vehicles. It would sunset after six years.

While promoting electric vehicles helps reduce gasoline demand, their use still comes with many of the negatives that come with auto-dependency and the auto-oriented places they require. They are also still expensive in spite of the tax credit, so little help to those of modest means who are stuck buying used cars that were once the big new fuel-inefficient ones bought by people less concerned with fuel costs. How about an e-bike tax credit?

The state’s decades-long effort to promote auto-dependency has rendered Missourians vulnerable to high fuel and vehicle prices, sending more and more of their wealth out of their households and communities. The pandemic relief and infrastructure bill funding offers an opportunity to change course. Will we learn our lesson this time or continue to double-down on failed policy?