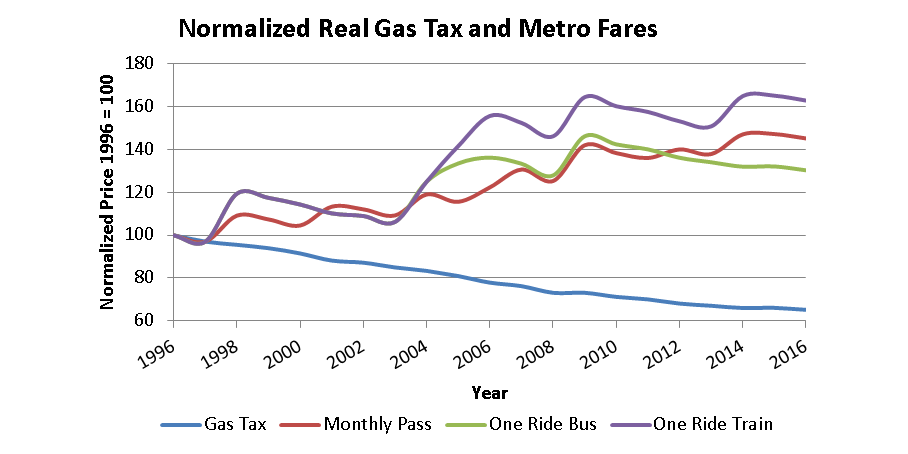 Gas prices have plummeted recently, as anyone vulnerable to its price volatility can attest, but less noticed is that due to inflation the fuel tax has been cut again. The Consumer Price Index Jan 2016 to Jan 2015 was 1.4%. Since the Federal and Missouri fuel tax is a fixed amount per gallon, its burden declines over time.

Missouri’s fuel tax was last raised in 1996. Since then its buying power has eroded by 34%. It would need to be 26 cents per gallon today to have kept up with the CPI, let alone the rise in cost of building and maintaining roads and bridges. While drivers have enjoyed a dwindling tax over the last two decades, transit users have faced a different scenario. Transit fares have not only kept up with inflation, they have outpaced it.

There’s still a chance Missouri won’t be able to match the subsidized Federal subsidies for roads. Sen. Doug Libla has proposed SB 623. It would raise the gas tax by 1.5 cents and the diesel tax by 3.5 cents, raising an estimated $80M per year. Due to the Hancock Amendment this is all the legislature can do on its own. This bill passed out of a Senate committee, but will likely die in the House. A higher tax for diesel is a great policy considering how much more damage heavy vehicles do to roads.

The Missouri Petroleum Marketers and Convenience Store Association are gathering signatures to raise the cigarette tax to raise money for transportation. The cigarette tax also is a fixed amount per unit thus declines over time. By passing this small tax increase they can ward off future attempts at a bigger one for children’s health care. We may find out if Missourians love their roads more than their children.

Most intriguing is Sen Schaaf’s SJR 18, an amendment that would raise the gas tax like Sen. Libla’s bill, but would also bequeath the supplementary system of roads (lettered roads) to counties, with some extra money. MoDOT is responsible for too many miles of roads. Many see less than 400 vehicles per day. This is the policy direction we should be heading thus it doesn’t have a chance.

Disturbing is Rep. Brattin’s HJR 70, an amendment that would put MoDOT funding ahead of issuing tax credits. The highways and transportation commission would determine the “needed” funding level. An independent committee of ten appointed by the speaker of the house and the president pro tempore would evaluate the funding proposal. In other words if you’re counting on Historic Tax Credits to make the numbers work on a rehab property because MODOT subsidies have undermined the value of said property, get in line!

Most disturbing is a plan to take savings from welfare cuts to pay for roads. A sure sign of our mixed up priorities would be to take welfare from children to provide welfare for cars. Anything to avoid the obvious.

None of these proposals address the elephant in the room- I-70 (tolls!). And none do anything to add service or provide relief to transit users.