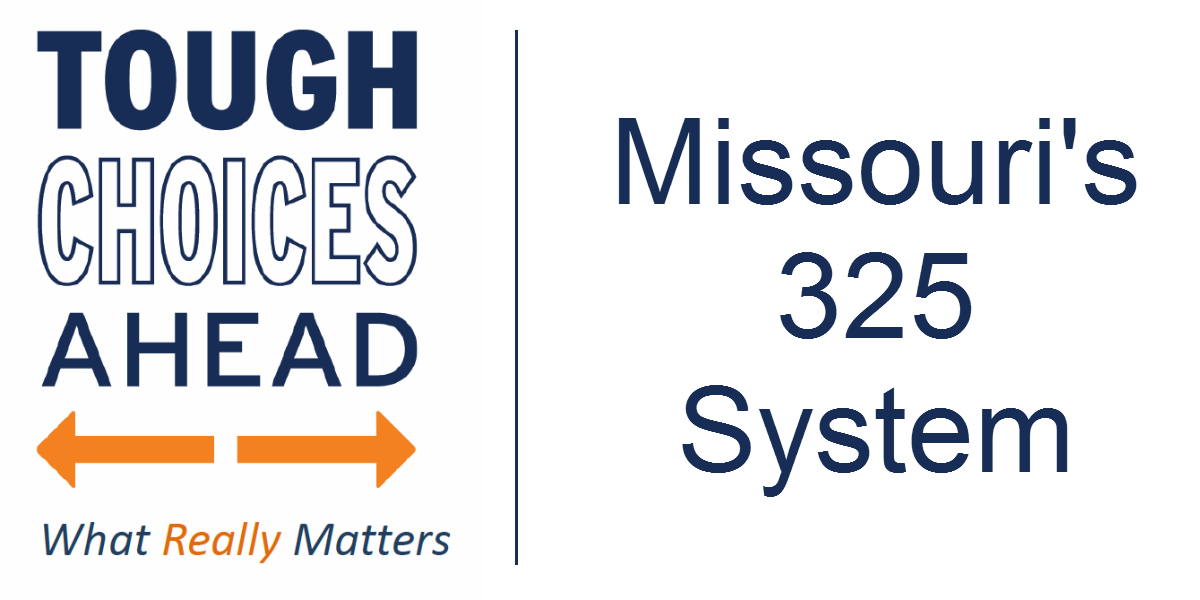 The MoDOT-road construction industrial complex dangled carrots in front of voters last summer. The shiny new objects were supposed to entice voters to pass Amendment 7, a 0.75% sales tax increase for ten years that didn’t even apply to gas, and would forbid gas tax increases or tolls. Backers tried to scare voters with bridge fragments crushing school buses (ironic given that car collisions are the leading cause of death for kids while this funding would have promoted more driving) and warning that road safety was at risk and emergency vehicles wouldn’t be able to travel large distances as quickly to get to them in time of need. Voters rejected Amendment 7 last August by almost 19 points. Now here comes the stick. Naughty voters beware- tough choices are ahead. There will only be $325M in construction funding by FY2017, thus the Missouri 325 System.

While it is mainly a way to scare voters and legislators into finding more funding for MoDOT, this plan is actually a step in the right direction. MoDOT will only make capital improvements to 8,000 of its 34,000 miles of responsibility. The rest will only receive basic maintenance.

Delving into the included documents reveals how (willfully?) clueless the system is and that greater reform is needed before more funding is approved. 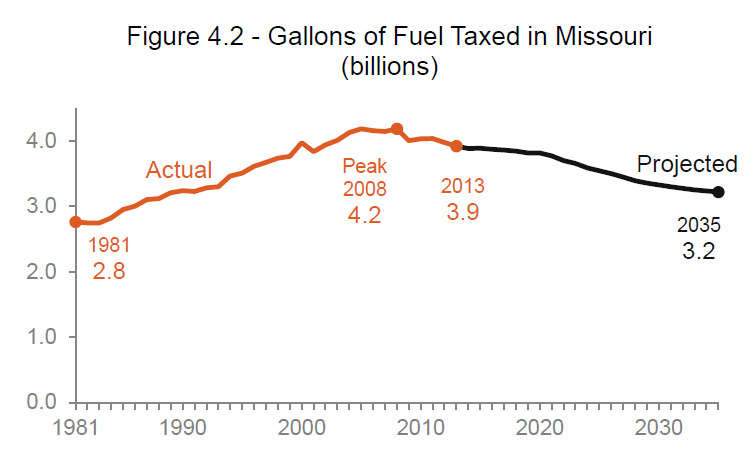 {Gallons of Fuel Taxed in Missouri hasn’t fallen off a cliff, just not kept up with unrealistic projections}

In the “How We Got Here” section they again blame higher fuel economy even though fuel consumption hasn’t fallen off a cliff. It’s easier to scapegoat rising fuel economy mandated by the Feds over the increased heavy truck traffic that does 1000s of times more damage to roads than a mid-sized car.

Kudos for bringing up inflation. MoDOT officials rarely mention this in interviews. Probably because the obvious solution to that is raising the gas tax, which is politically unpopular. Since the fuel tax is a fixed amount per gallon it is cut every year by inflation. On top of that the cost of road building materials has out-paced inflation, thus a double whammy.

The big construction budgets of the last decade were fueled by bonding and now the interest and principal payments are coming home to roost. Shouldn’t the big boost to our economy form all that road building be paying off by now? No, because little regard is given to return on investment for road projects. It’s about more, more, more.

They fail to mention declining vehicle miles traveled (VMT). The economy is changing and growth is less correlated with more VMT. Personal preferences are changing too. MoDOT’s projections, like just about every state DOT’s, of huge, never ceasing VMT growth have missed the mark consistently. If you sought investors in your enterprise with such a poor track record of market projections, you’d be laughed out of the office. They are used to justify more, more, more while digging us a bigger and bigger hole. 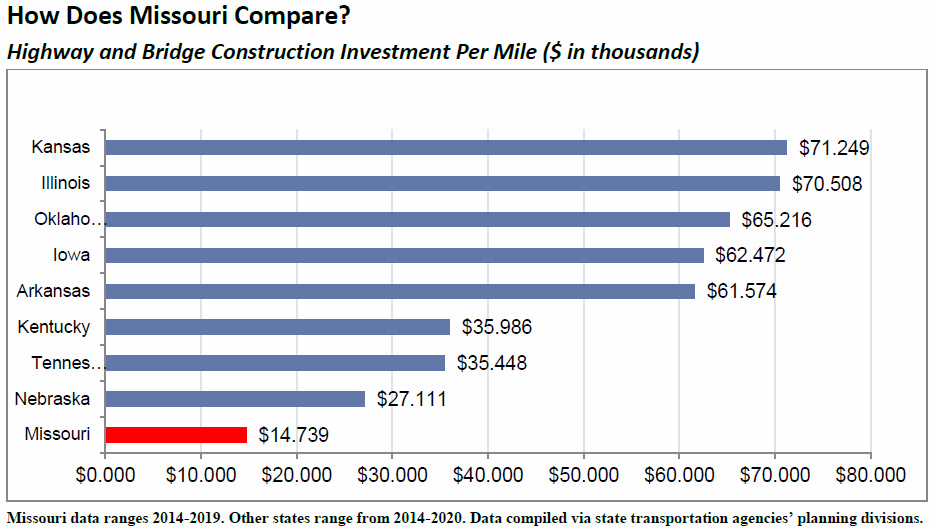 {Maybe they’re planning to build too much?} 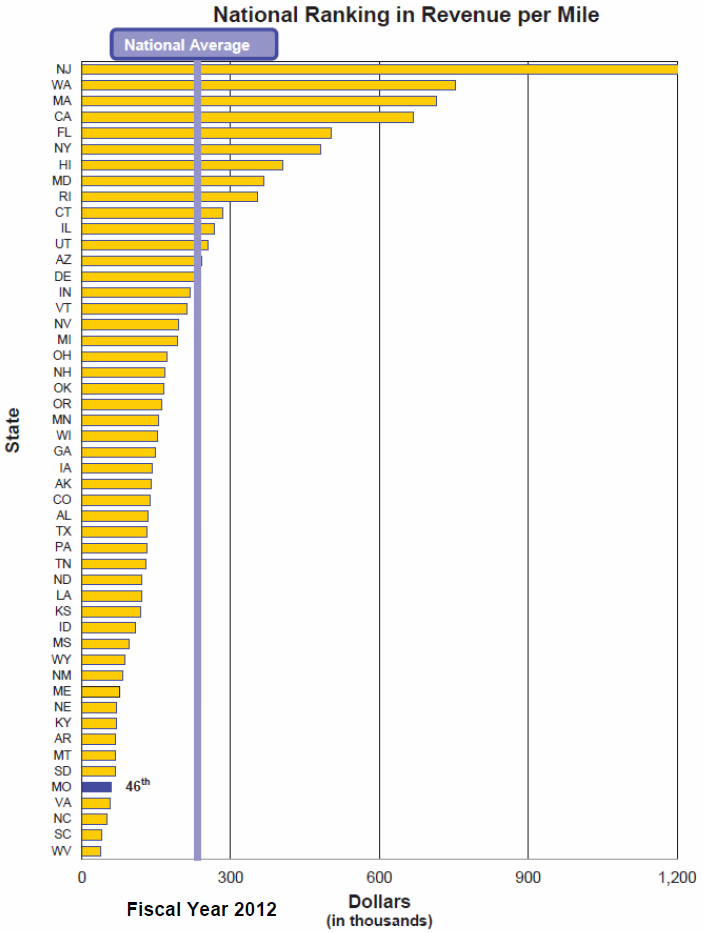 {This is not only due to having a low gas tax, but also there are so many miles that get little use}

They fail to mention that 34,000 miles of roads might be too much for our population and economy to sustain. They fail to mention the luxurious features added like these flyovers near Farmington and in Jasper County. Does the incremental increase in economic activity compared to an intersection come anywhere close to paying for them? Not even close. Their purpose was to provide jobs for the industry. Without state subsidy the towns and counties in which these lie would never have been able to afford them. 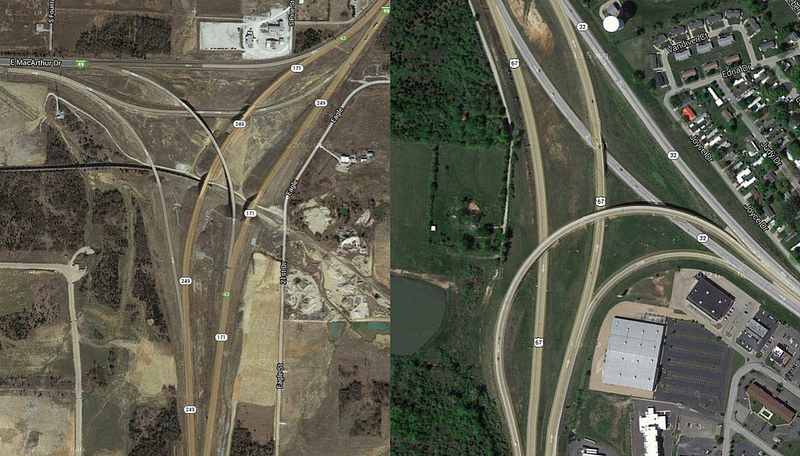 They fail to mention the spreading out of our cities and towns enabled by road projects which have burdened each of us with more infrastructure of all types to take care of. We’ve made ourselves house poor. Instead of fixing the leaky roof, we built an addition, and now we’re wondering why we can’t afford to fix the roof.

MoDOT warns that Federal matching funds that would help pay for roads and bridges will be left on the table. This is a good thing. Metro should get those funds to build Metrolink. If only it were that easy.

Next come the sticks. In 10 years only 27% of the supplementary system will be in good condition. Already nearly half the fatalities on state highways occur on the supplementary system, and there won’t be funds to add safety features. Perhaps their design speeds are too high? Perhaps people could live closer to each other in places called towns so they don’t have to drive as far and as fast? By 2024, 1,434 bridges will be in poor or serious condition. Why are we adding a lane to the Poplar Street Bridge when there are currently 483 bridges in Missouri in poor or serious condition? 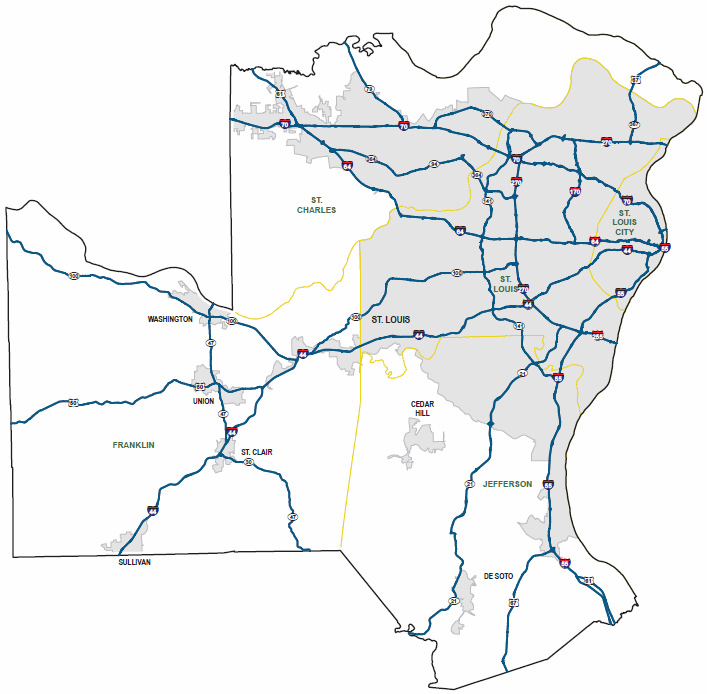 The sticks aren’t exclusive to rural areas. State routes within cities are mainly a part of the supplementary system. Want a crosswalk put in? Too bad, no money. Only the interstates within I-270 are a part of the primary system. Don’t worry exurbanites, the sprawl routes outside I-270 are. Your state subsidies for development will continue.

They warn stroads like Natural Bridge, St. Charles Rock Rd, Page, Olive, Manchester, Watson, Gravois, Lemay Ferry, and Telegraph will be left to wither. Some of these routes, especially the ones in the city were taken over by the state as part of the horse-trading the last time the gas tax was increased. The city couldn’t afford to maintain them ironically because MoDOT destroyed the tax base of the city by building highways through it and blighting areas near them. MoDOT prioritizes level of service, moving more cars more quickly as fast as possible safely (for cars), that is making them roads.

A city should prioritize creating a platform for private-sector wealth creation which earns a return to the city via greater tax base- a street. Leaving these out is a good thing if we are given control of them. We’ll have to figure out how to take care of them rather than depend on the state. Without state subsidy we will have to get more out of those streets than we do now. Yes, that means more buildings taller than one story, less parking, slower design speeds, living closer to each other, more walking. We will have to increase the amount of economic activity per unit of infrastructure. We’ll be safer, wealthier, and healthier for it.

MoDOT encourages us to take action and ask tough questions. Let’s ask why gas and deisel taxes are so low? Was limiting them to only go to roads and bridges in 2004 wise? Shouldn’t diesel taxes reflect the amount of damage done to roads by heavy loads? Why is fuel exempt from sales taxes? Why can’t counties and cities levy their own fuel taxes? Should we not bond again and go to pay-as-you-go? Why should urban areas subsidize low productivity projects in other areas of the state? Why does MoDOT gamble with tax dollars on low returning investments on the edges of towns and cities? Why should we approve more money when MoDOT projects have done so much damage to cities big and small? Shouldn’t lowering transportation costs for Missourians be a top priority? Should the nearly 60-year-old elevated I-44 lanes downtown be replaced by a boulevard before it collapses? How does increasing level of service on city streets make us safer or wealthier? Would increasing Amtrak frequency from STL to KC and encouraging more freight hauling by rail be cheaper than widening I-70? If only 8,000 miles of the 34,000 are critical to the state, should much of the rest be turned over to counties? Why has Missouri’s economy lagged the nation’s despite all the roads we’ve built? Is more, more, more paying off?

While not perfect, let’s give the Missouri 325 plan five or ten years. It would give our population and economy a chance to catch up to the bloated system we’ve burdened ourselves with while ferretting out what parts are truly valuable. A period of constraint will help us break bad habits, rearrange priorities, and take us to a better place.