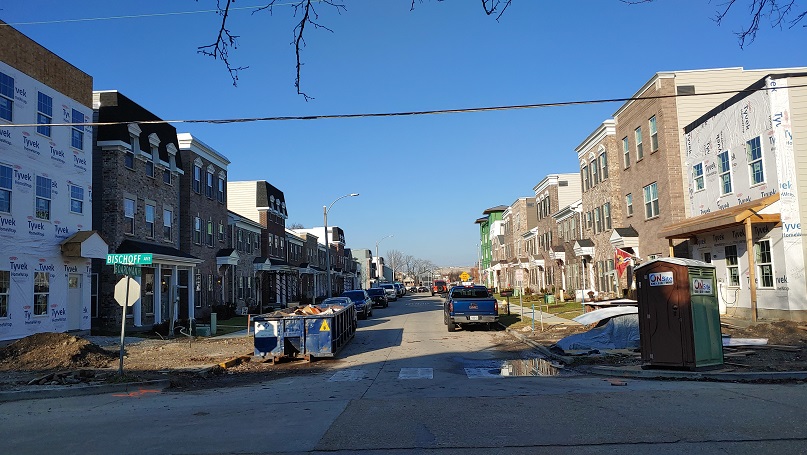 The La Collina development in The Hill neighborhood is pretty far along. It consists of a 225-unit apartment building by Draper & Kramer dubbed Moda at The Hill and up to 58 single family homes. The homes were built by McBride Homes. They sold fast, so congrats to them. Let’s have a look around.

La Collina lies west of Kingshighway between Daggett to the north, Hereford to the west, and Bischoff to the south. A bit awkward that Boardman intersects Daggett in the middle of the block. Lining up the entrance from Daggett with Boardman to the north would have provided a shorter path to reach the parking garage from Kingshighway. Noteworthy is that this development added to the street grid. #Healthegrid

You can see the structured parking for the apartment building from Kingshighway. There are 250 parking spaces within plus 80 more surface spaces.

The single family homes are on lots that are 26 by 96 feet with alley-facing garages. Many lots in The Hill are 25 to 30 feet wide, though usually deeper.

The houses make a nice street wall. The density is evident.

The houses are a mix of two and three stories, a increment up from the 1 to 2 stories typical of The Hill. They don’t have basements though.

The front yard utility litter is most unfortunate. On the bright side there are no power lines on the streets or alleys.

I hope sidewalks for crossing the railroad tracks on Bischoff are planned. Walking from Kingshighway along Bischoff is unpleasant.

The apartment building creates a terminus for Wilson Ave.

I find the houses quite ugly. I struggle to find the words to explain why. The brick color? Lack of a brick return on the sides? The windows? The porches? The lack of basements not pushing the first floor up higher than the sidewalk? The awkward mansard roofs on some? The floor heights? Is it just that it’s new and squeaky clean? Maybe some of you who agree have the vocabulary to describe the shortcomings and suggest some changes that wouldn’t have cost too much.

We don’t know how well the apartments will lease yet, but given the pace of sales of the houses, credit to location, location, location shouldn’t be overlooked. The Hill is a great place that’s loved and invested in. It’s one of the few places in the city that sees teardowns for new homes. When you walk around, you feel the soulfulness.

Is La Collina adding to that sense of place? More people living nearby will enliven the streets and help buoy the institutions and businesses of the neighborhood. There’s no commercial space within La Collina though. There’s none of the missing middle of the sort that adds variety, some of the soul and charm, to The Hill. Just a huge apartment building and single family homes. It seems like that’s about all we can build anymore.

To be fair La Collina isn’t complete yet. There are 24 condominiums planned along Daggett and the public space to the west could be good placemaking. Maybe the resident to commercial square feet ratio is too low in the area and more commercial space isn’t sensible. There’s a large fallow parcel to the north. Perhaps that’s an opportunity for some variety.

I hope you enjoyed the tour, have a look for yourself sometime, and best wishes to the new residents.