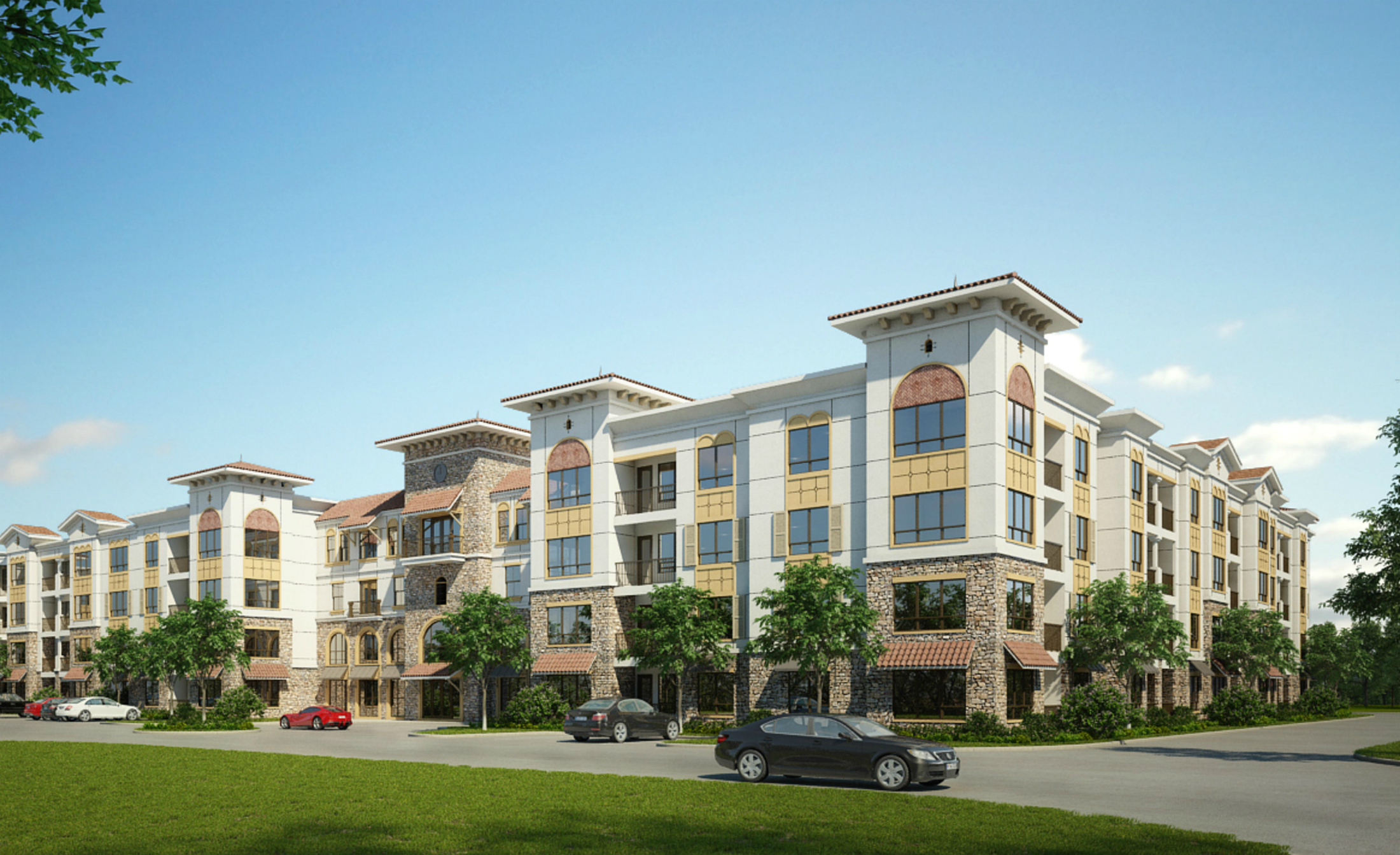 A new rendering and detailed site plan show a refined design for the proposed infill for The Hill neighborhood. The first details of the long-rumored development were revealed in May of this year. Revisions to the plan have rolled out regularly since the first presentation.

While the rendering of the large apartment building appears only slightly changed from prior images, the site plan is a first detailed look at how the the project would lay out. The plan shows 20 single family lots facing Bischoff Avenue, Hereford Street, and Daggett Avenue. A three-story condo building would face Daggett at the east end of the site.

Nine townhome buildings with a total of what appears to be 49 units, front an interior driveway. The smaller buildings would hide the four-story apartment building at the center of the site. The building wraps a courtyard with a pool and a 300-space parking garage. 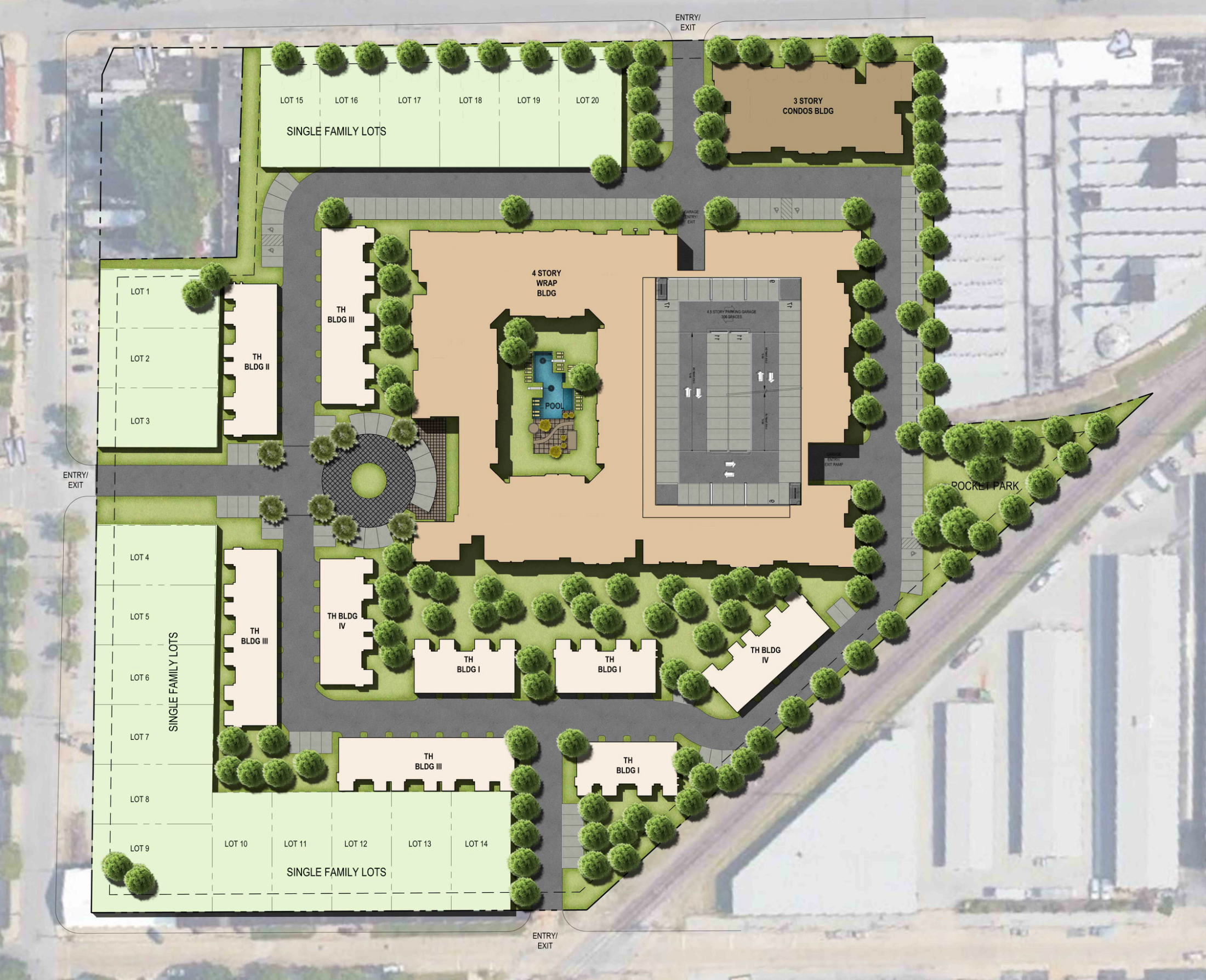 From our previous reporting: New Images Presented for 10-Acre Infill Proposal for The Hill

New images of the evolving plan for a vacant 10-acre site in The Hill neighborhood were presented to the public last night. Images show three-story apartment buildings facing Daggett and replacing the existing warehouse (above). A taller apartment building sits behind, while single-family homes are shown fronting Hereford Street across from St. Ambrose school (below). It also appears that the project continues to shrink, now at 293 total units, though a total number and unit mix has not been confirmed.

From comments shared by Andrew Arkills on Twitter from the presentation, the developer offered to sign a binding document that rental units would never be made available as Section 8 housing, a fear expressed more than once by residents of The Hill. While in Missouri it is not legal to deny a potential tenant solely on the basis of them having a Section 8 voucher, requirements such as monthly income, large security deposit, and credit score requirement can have the same outcome. Whether it’s legal to pledge that the property will never be made available to Section 8 tenants is unclear. While no plans for incentives such as tax abatement have been offered, 10th Ward Alderman Joe Vollmer seemed to indicate that a request would be forthcoming.

Our previous report Revised Plan for $40M, 10-Acre Development on The Hill Moves Forward is below:

From: Revised Plan for $40M, 10-Acre Development on The Hill Moves Forward 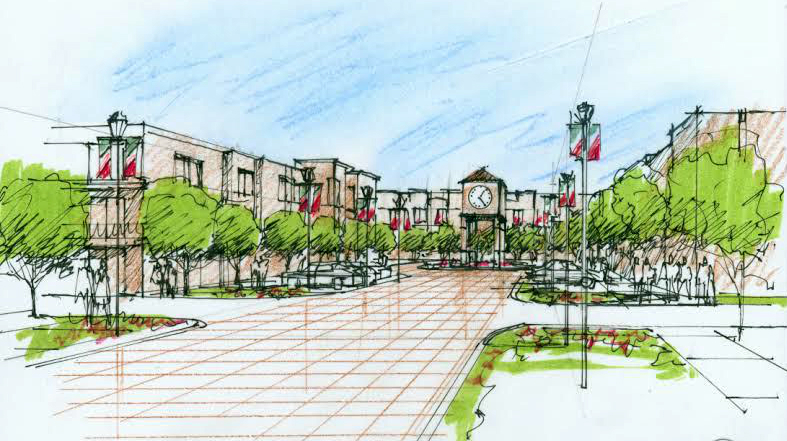 $40M Residential Complex Scheduled to Break Ground This May

Sansone Group and Draper & Kramer have received approval from the city for their planned development on The Hill and has closed on the former warehouse/industrial complex. The site spans almost 11 Acres on the east side of the neighborhood, on which the developers will build a high-end, residential development. Ground breaking is scheduled to begin as early as this May.

“This project would not have been possible without the collaborative effort of Alderman Joe Vollmer, Msgr. Vince Bommarito, The Hill 2000 Board, and the entire Hill community. We are delighted to be part of this landmark location and the proud Hill neighborhood.” said Doug Sansone, Principal of Sansone Group.

The new multi-family property, located at 4932 Daggett Avenue, will be comprised of a 225 unit apartment complex as well as 49 townhomes, approximately 45 condos and 20 single-family homes that will be listed for sale. The apartment building will consist of 1 bedroom/1 bath and 2 bedroom / 2 bath apartments ranging from 572 SF to 1,230 SF. Amenities will include a salt water pool with cabanas, spa, outdoor kitchen, community space, catering kitchen, business center & breakout rooms, yoga studio, sky deck, and garage parking.

The vacant warehouse, set for demolition, currently consists of 540,000 square feet and is located across from St. Ambrose Catholic School. It was formerly known as the Owens-Illinois Glass Co. industrial complex but has sat vacant for over a decade.

Mark Kornfeld and Grant Mechlin of Sansone Group were the only brokers present in the transaction with the seller, Berry Grant Company

According to Kornfeld, construction on the new development could be underway by the end of the year. The apartment building is projected to be complete in two years and the homes should be delivered around the second quarter of 2018. The project will create approximately 800 construction jobs.