A set of four townhouses, dubbed the Walker Townhomes (WalkerTownHomes.com) in recognition of the area’s walkability, at 521 Des Peres Ave, at the southwest corner with Washington Blvd, is moving forward with marketing and presales. Nextstl first reported on the plan in June 2015. 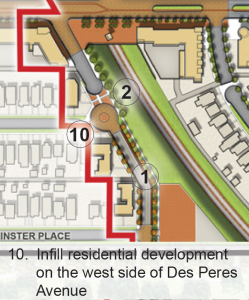 The development of the long vacant site near the Delmar Metrolink Station carries out the vision of the Skinker DeBaliviere Neighborhood Plan which calls for new development on the three empty lots on the west side of Des Peres and makes a short term priority of promoting new housing choices and topologies. The project secured a variance and approval by the Preservation Review Board. The developer is the Skinker DeBaliviere Community Housing Corporation (SDCHC), the architect is Design Alliance, located a block away on Delmar, and the contractor is Reicon Construction. The sales agents are Robin Halterman and Traci Stix of Dielmann Sotheby’s International Realty. They are the sales agents for 4101 Laclede. 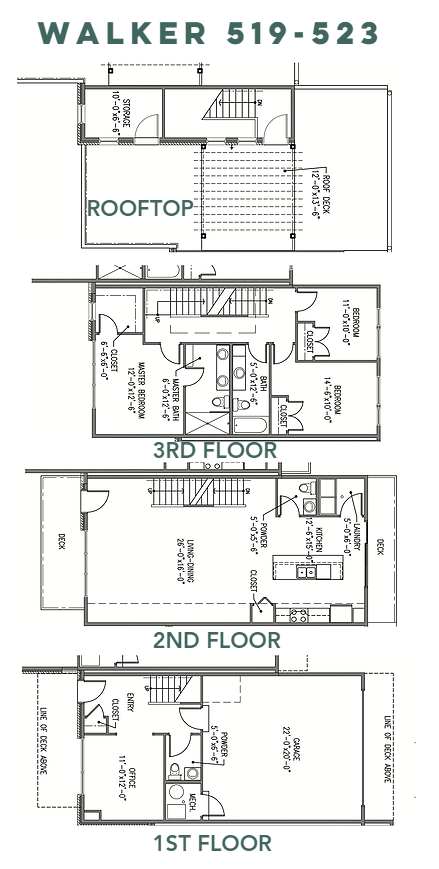 Each townhome features a half bath, flexible room, and rear-access garage on the first floor. The second floor has the kitchen, living room, a half bath, and front and rear balconies. The third has two bedrooms and bathroom, and a master bedroom suite. There is a stairway to the roof with a patio and pergola. All the bells and whistles options you might expect in urban new construction are available. The units share a driveway in the rear to the alley.

A concern for any development along Des Peres is the buried river beneath the street. Piering will be required to support the structure. The project has been approved to receive Neighborhood Preservation Tax Credits. The units are ~2200 sq. ft. with lists prices ranging $450k-$485k.

In other Skinker DeBaliviere development news: 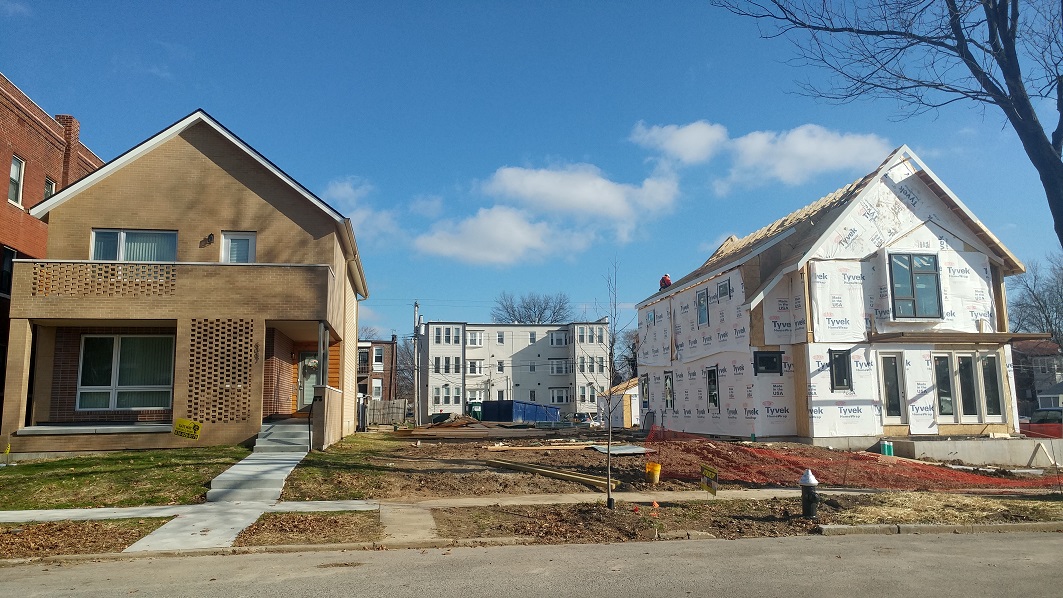 A neighborhood resident has purchased 6001 and 6007 Pershing near Des Peres from the city for $15k to build three houses. One is to be occupied by the purchaser. UIC designed and is building the homes. 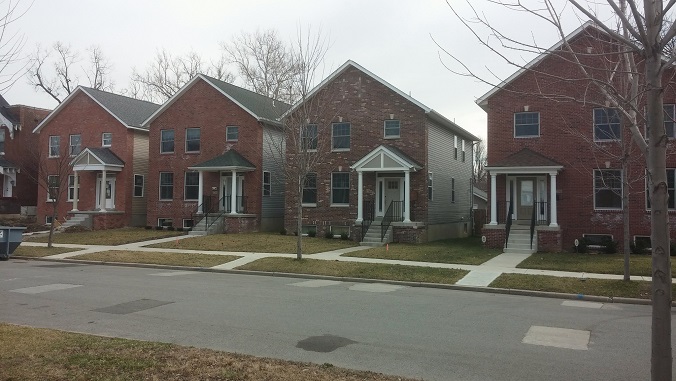 {5700 block of McPherson near Laurel}

Build out of the 5700 block of McPherson with single-family homes mostly by the Jaffe Group, who also developed Kingsbury Square a block north in the 1980s and 1990s, is nearly complete. The set of four pictured above were started in October 2014. Homes built in the early 2000s received 25-year tax abatement (10 years at 100% plus 15 more at 50 %). Ones built 2006 and later received 100% abatement for 10 years. One with numerous options including geothermal heating sold for $422,500. Four more were completed this year. There is only one empty lot left on the block, and the over-sized Busey Bank parking lot may be a development opportunity. 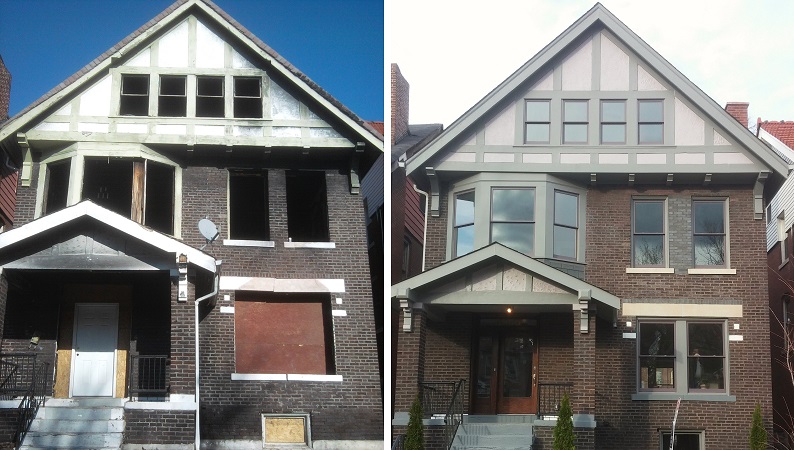 The rehab of burnt out 5859 DeGiverville is complete. The 2600 sf home burned in 2006 and sat vacant for years due to an absentee owner. The rehab was a collaboration between Eric Trudo, a St. Louis firefighter and neighborhood resident, the SDCHC, and Design Alliance. The project received Historic and Neighborhood Preservation Tax Credits. It sold for $325k and received a 10-yea tax abatement. The project won a Most Enhanced award from the Landmarks Association of St. Louis. Luckily the demo monster didn’t find this one.

Washington University razed a set of 13 ranchettes at 5960 McPherson. The Skinker DeBaliviere neighborhood plan shows this lot as a community garden as a part of the larger goal of greening Des Peres Ave. 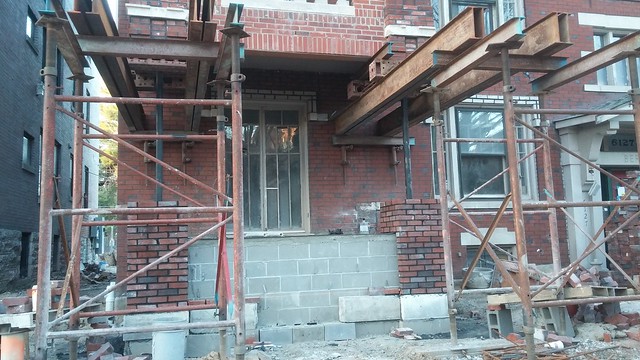 Washington University completed millions of dollars of gut-rehabs of 11 of its apartment buildings on Pershing and Waterman. They opened for tenants before the start of the 2015 school year. Due to the state barring non-profits from receiving Historic Tax Credits, WUSTL put the buildings under a for-profit, Parallel Properties. This means they’ve joined the property tax roles, a boon to the St. Louis Public Schools and other governments that levy property taxes. These 11 buildings plus 6188 McPherson have added $2M in assessed value and produced $157k in property taxes in 2015. More details from the Times of Skinker DeBaliviere page 2.

Hopefully more good things to come for this neighborhood!