The St. Louis Development Corporation (SLDC) via a U.S. Housing and Urban Development (HUD) grant awarded to East West Gateway, the metropolitan region’s collective planning organization, is creating the St. Louis Regional Sustainability Plan, known as OneSTL. They are examining the areas around the MetroLink stations to identify potential development sites, their scale and types while advancing the sustainability goals of the grant. Beyond those goals I would add that we have spent and continue to spend a lot to build, maintain, and operate our mass transit system, and we should develop the areas around transit nodes to leverage this asset. Transit nodes present an opportunity to create neighborhoods less dependent on cars. The less we spend on cars the more we have to spend on other things. A full service neighborhood with high quality of life will inevitably keep more of that wealth. According to the American Automobile Association (AAA) it costs $8,500 to own and operate a car annually. The National Building Museum finds that just $1,500 of that remains in the local economy.

In the 20 years that MetroLink has been running, little development (many rehabs though) has occurred near the Delmar and Forest Park stations. Forces greater than the MetroLink, at play for much longer than the last two decades, have stymied development potential. Read Mapping Decline for a melancholy account of St. Louis’ 20th Century slide. Finally the tide is turning. There is greater recognition that silver-bullet projects, building more and more highway lane-miles, throwing away old neighborhoods, and spreading our jobs and housing out thinner and thinner isn’t working well. We simply have to encourage development that is more financially productive in order to have any hope of maintaining the infrastructure and funding the government services we expect (for more on financially resilient cities see strongtowns.org). Also technological advances, environmental concerns, and an economic boom hangover are changing housing, lifestyle, and transportation preferences. The dedication to fostering the strong neighborhood in the study area puts it in a position to capitalize on these shifts. The developments envisioned in the TOD plan may now be more realistic than ever. 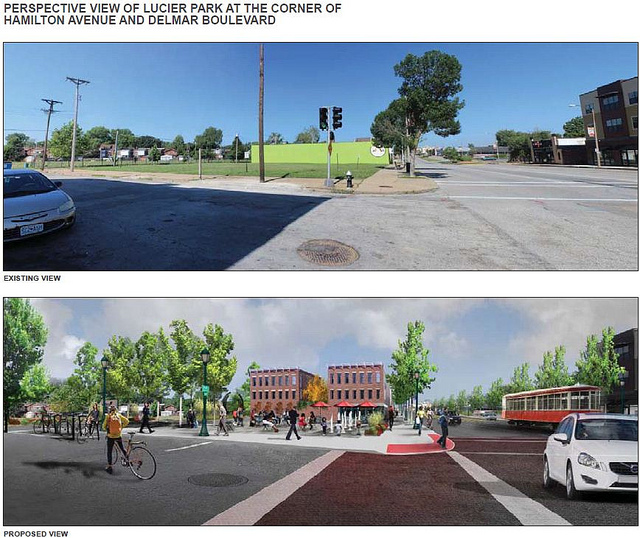 In May, the consultant team, led by H3 Studio, presented three alternatives for development goals. The attendees, recognizing the potential of the area and the societal shifts mentioned above, chose the most ambitious option. The technical action committee met July 7th to further refine the plan. A second public workshop was held July 23rd to present the latest and get feedback from the public. With the help of piggy-backing on the Skinker DeBaliviere Urban Design Planning Process, and despite the limited time, the plan has come together very well.

There is a lot in these presentations. I won’t cover everything here. The Draft Final Report is embedded below. Understand that these plans represent a multi-decade vision for the future of the area. It won’t happen overnight, far from it. And that’s for the best. It would be very risky to attempt a massive redevelopment just to have it miss the mark. We’ve seen how the incremental approach in The Loop has proven resilient and successful. These plans codify its goals in a coherent framework so that when public or private resources appear, there is a basis from which to start.

The Loop exemplifies the idea of place. You go there rather than pass through it. New developments must continue placemaking through building form and use, streetscapes, and public spaces. The Washington University in St. Louis Loop development is a great example. It will have a grocer and diner along Delmar, housing above and behind on Enright, and a public space via a path from Delmar through to Enright. That’s a place you want to be, as it compliments the rest of The Loop. The opposite is the now vacant and blighting Church’s Chicken which squandered its prominent site and thumbed its nose at the placemaking going on around it with a parking lot in front and a single-use building type. With these plans and a form-based code, we can better avoid such mistakes. 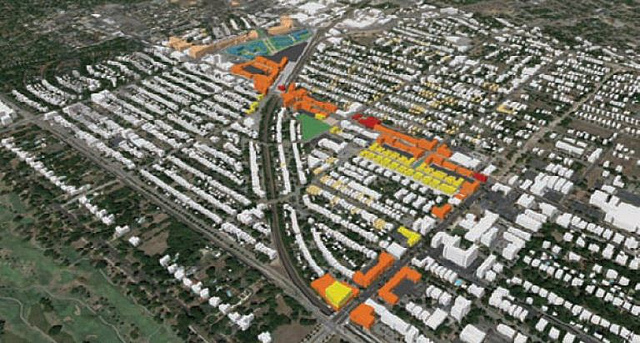 The plan envisions, and the meeting attendees showed preference for, equal or higher densities throughout the study area than already exist. More residents and workers are essential to support the private businesses and public enhancements that make a great neighborhood. Skinker, Delmar, and DeBaliviere would see the largest and tallest buildings developed. The important thing here is that they be mixed-use so that they can meet the market when built and adapt to changes in the market afterward. The plan points out that the jobs/housing ratio is way too low, implying many are driving elsewhere for work. The Loop Media Hub plans to be a catalyst for job growth. It and all the other features in the plan should create a place attractive to employers as well as residents and visitors.

If the Metro garage on DeBaliviere is eventually redeveloped, it would be replaced by mixed-use infill along Delmar, with residential behind. A plan could include senior housing, providing opportunity for residents to retire in place. Demand for senior housing, especially in the urban environment will increase for years to come. The garage is a very large space and there’s room for a community gathering place, church, plaza, garden, and more within its footprint. 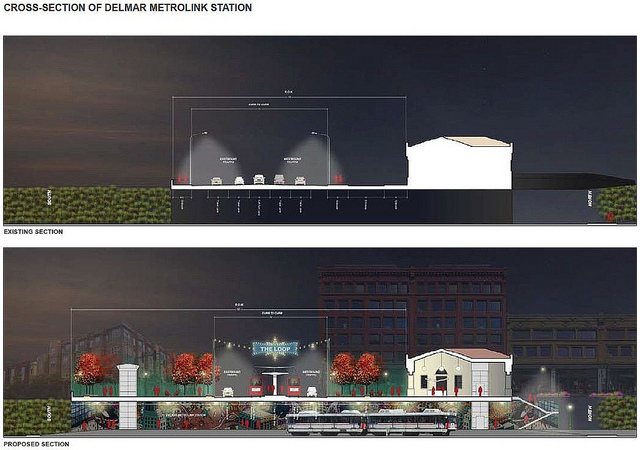 The busy Delmar MetroLink Station is hidden down behind the historic Wabash Station. The platforms should be underneath Delmar with the Wabash station above as the main entrance. It should have been that way in the first place—a missed opportunity for sure. The difference such a change would create would be dramatic. Instead of arriving in The Loop to an abandoned train station and an abandoned car service center, one would step out of the Wabash Station onto Delmar with the trolley going by and occupied businesses in all directions. It would foster a feeling of “I have arrived” to live, work, and play. Also a great idea is to add access via elevator on the south side of Delmar so pedestrians don’t have to cross Delmar. Unfortunately the newly reconstructed Delmar bridge may be too narrow, if so, it’s another missed opportunity.

Around the Forest Park Station would be a transit plaza covering the tracks on either side of DeBaliviere. To the north, new buildings would fill the empty/parking lots and replace existing suburban-style buildings. Access from Pershing to the west is added, an obvious oversight today. We want people to use this thing, right? Whether one is going to the station or Forest Park there is no reason one should have to go chart a circuitous path to access urban transit. The Metro parking lot would be replaced by an 8-story building with structured parking. 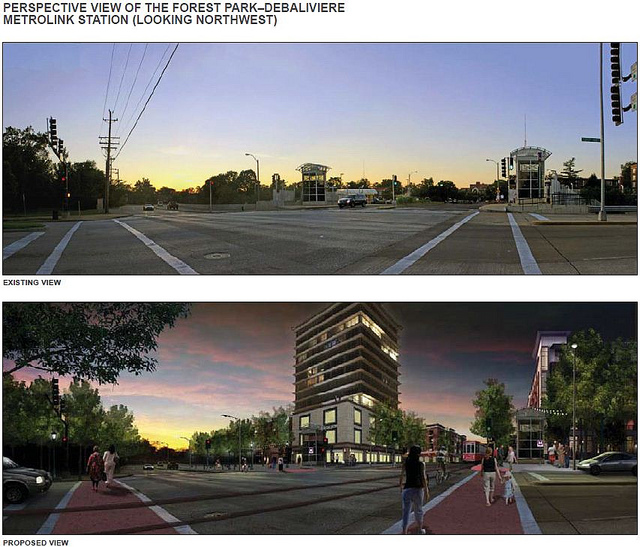 The plan outlines streetscape improvements to varying degrees. These are important to make the street more attractive to pedestrians and add to the sense of place. We see the difference in pedestrian experience and how it compliments development already by comparing the parts of Delmar that have had a street diet (lane reduction) and widened sidewalks, and the parts that haven’t. The plan calls for extending the street diet east to Goodfellow. Pedestrian lighting, marquee lighting, curb cuts, fixing sidewalks, burying/moving overhead utilities, are all good incremental improvements. Broken, weedy, and littered sidewalks and poor lighting don’t foster a safe feeling. In the plan, street trees are encouraged as well. They add shade, beauty, and value. The city actually plants them for free, upon request. The trolley and planned greenway will bring some of these improvements.

The street grid has been abandoned and interrupted too often all over St. Louis including within this study area. The plan rebuilds and extends the grid. It astounds me that school buses can’t access Hamilton Elementary from Delmar. The plan shows Washington running from DeGiverville to DeBaliviere, Hamilton reaching Westminster again, Goodfellow extending south to Washington, and a whole new grid for Enright, Des Peres, a new street (Edwards Ave?), and Cabanne in the area northwest of the Delmar Station. Many blocks in the area are too long, which impacts walkability as the next street always seems far away. Long blocks encourage speeding with so much length to accelerate into. Unfortunately it doesn’t look like there are opportunities to shorten blocks. What we can do is rebuild the grid and build streets that support pedestrians and businesses. 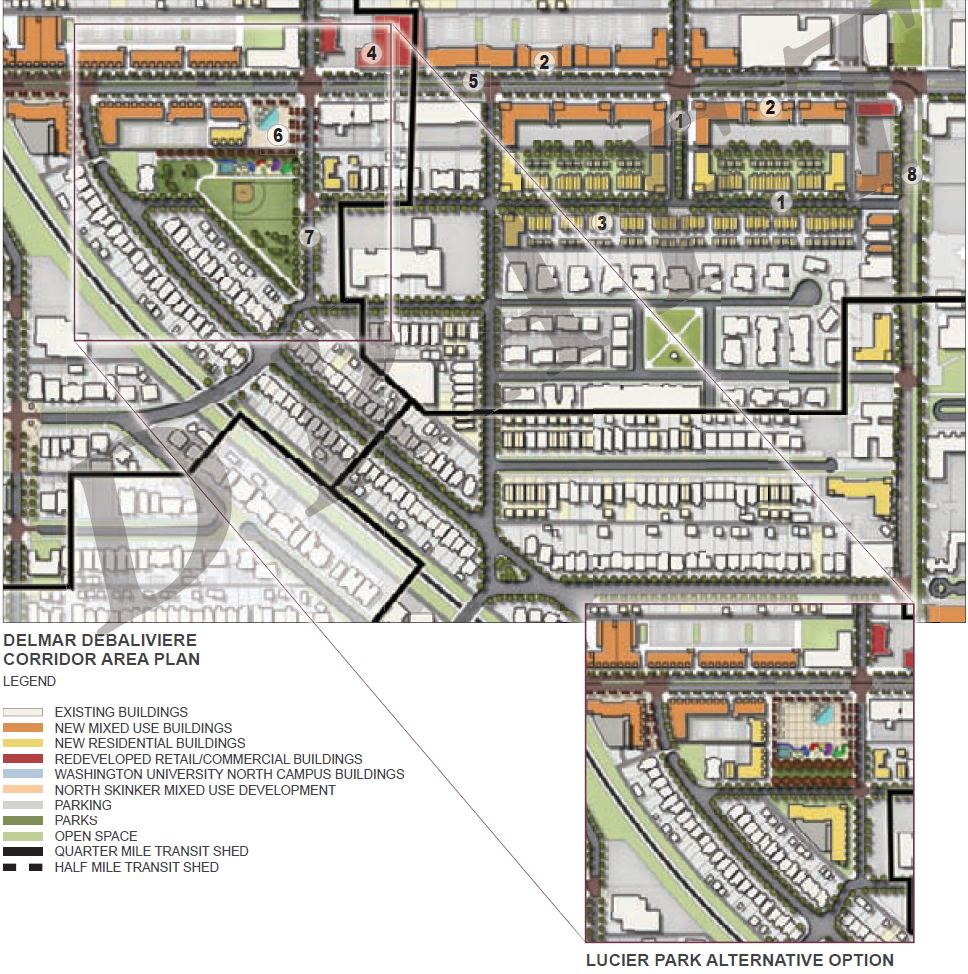 In the planning process, a great conundrum for the consultants and meeting attendees has been what to do with Lucier Park. The three-acre park was established in 1980 after apartment buildings were demolished and several streets vacated. One can see the ghosts of the buildings on Google Maps. The park’s main problem is that the surrounding buildings don’t face the park. They pre-date the park by half a century or more. Parks are supposed to add value and draw people out, provide a place to gather. Lucier badly misses the mark. Here, the consultants offer two visions for the challenging space. Each would reduce the size of the park and add fronting buildings. The second of the two options would be preferable because it allows the completion of the street grid, leaves more room for additional development, puts eyes on the park almost all the way around, appears to be more all-seasonal, and looks to require less maintenance. Either option would require a city-wide vote after city voters approved a referendum several years ago requiring a public vote for any reduction in city park land.

Perhaps most importantly, the plan introduces a form-based code for the area. A form-based code regulates the physical form of buildings rather than just their use. For a new development at a given site, the code would provide a range of heights, the setback from the street. The code would not include minimum parking requirements, instead allowing developers to build to suit the market. This regulatory scheme will help to foster the types of developments outlined in the plan. For example the new building at Delmar and Limit is a missed opportunity. The site perhaps could have supported one or two more stories with offices or apartments, but minimum parking requirements played a part in discouraging a taller building. Another example is the former Church’s Chicken. It’s a single use building that doesn’t easily accommodate new uses, squandering the site’s prominence. A form-based code will prevent such mistakes. It is necessary to prevent underdevelopment in order to capitalize on the public enhancements brought by MetroLink, the trolley, the greenway, and other public improvements. The southern portion of the Central West End was recently the first area in the city to implement a form-based code.

A form-based code is probably not the place for this, some type of architectural review is probably needed, because we also need a mechanism to avoid the architectural maleficence that is occurring at the new developments in Forest Park Southeast. “It’s better than nothing” should never be uttered. We can and should demand better.

With the Vision for Parkview Gardens, the Loop Area Retail Study, the Skinker DeBaliviere Development Plan, and the TOD Station Area Plan, the area is today quite adequately planned and studied. The visions in these documents indicate the area has an aspirational and ambitious mindset. If it all comes to be we will have a world-class urban neighborhood. The renderings are like a dream. Through continued dedication and hard work and by building on successes and learning from mistakes these renderings can become reality.

A nextSTL contributor since 2011, Richard is an Electrical Engineer by profession. He earned a BA in Physics and Economics and an MSEE from Washington University in St. Louis. Richard is a transplant from Central Illinois and has called St. Louis home since 1998. He can be found on Twitter @Stlunite and contacted at [email protected]
View all posts by Richard Bose →