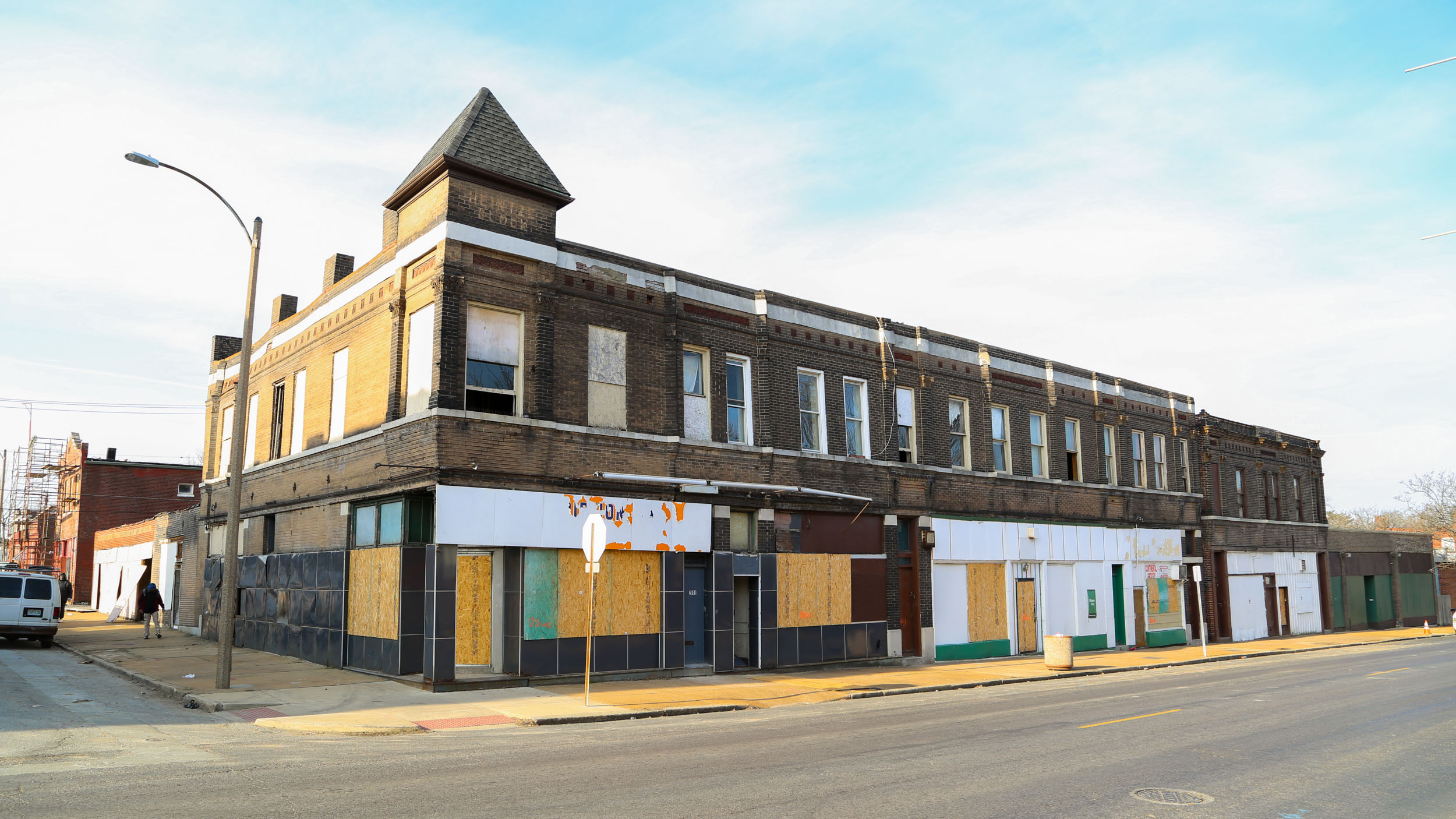 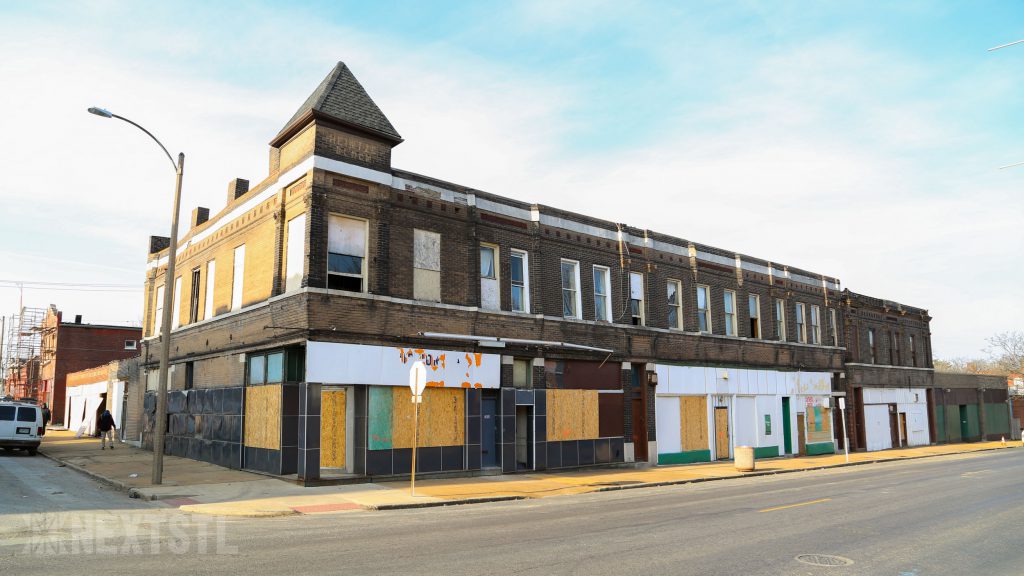 In the past few weeks crews from E. M. Harris Construction have been setting up office trailers and staging materials at the corner of Chippewa and Texas in preparation for a transformative $11 million mixed-use scattered-sites project in Gravois Park and Dutchtown that officially begins today. Rise Community Development will hold a groundbreaking ceremony at 3pm this afternoon at 2819 Chippewa St., St. Louis, MO, 63118 (AKA “The Frog Garden”).

The project involves the complete historic renovation of 16 buildings to create 46 apartments (25 two-bedroom, 18 three-bedroom, and 3 four-bedroom units) and nearly 8,500 square feet of commercial space along Chippewa Street. Residental units will feature sustainable design elements and high-efficiency appliances, off-street parking, accessible design where possible with some units specifically designed for accessibility and washer/dryer hookups in each unit. Apartments will be rent restricted and occupied by households with incomes at or below 60 percent of the average median income for the area. Final rental rates are yet to be determined.

The flagship building (technically two buildings) in the development, 2800-2812 Chippewa on the southwest corner of California and Chippewa, was built in 1907 and includes approximately 16,000 sqft of mixed-use space. 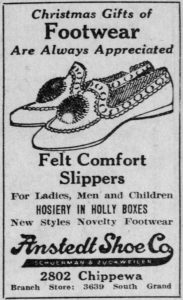 A bankruptcy auction notice from the St. Louis Post Dispatch in September 1935 listed the following:
“BANKRUPTCY AUCTION SALE ‘ SHOES AND FIXTURES 2802 Chippewa Street TUESDAY. SEPTEMBER 17th 10:30 A. M. By order of the Referee in Bankruptcy for the estate of Frederick F. Cox. Bankrupt, the following: Approximately 500 pairs of men’s. ladies,’ misses’ and children’s Shoes and the Fixture Equipment including Showcase, Window Fixtures and Cash Register. The property will be offered in bulk and in detail lots”

Remnants of an orange Rexall Drugs sign can still be seen above 2800 Chippewa.

Plans include 9 two and three-bedroom apartments and a commercial restaurant incubator on the first-floor corner space. 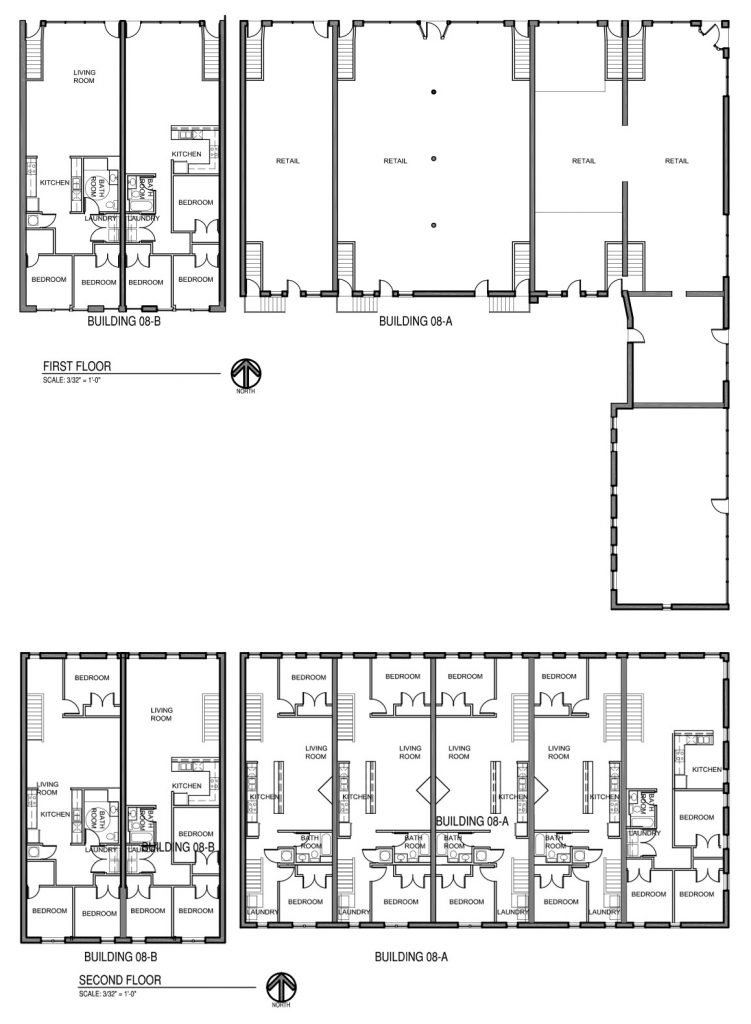 In selecting properties for the development, Rise prioritized prominent, highly visual and impactful sites—the majority of which are on corners. The development area is bordered by Cherokee Street to the north, Meramec Street to the south, Jefferson Avenue to the east and Michigan Avenue to the west. Most of the properties were acquired from LRA and CDA. The properties are within walking distance to many parks and services and are well served by several bus lines. 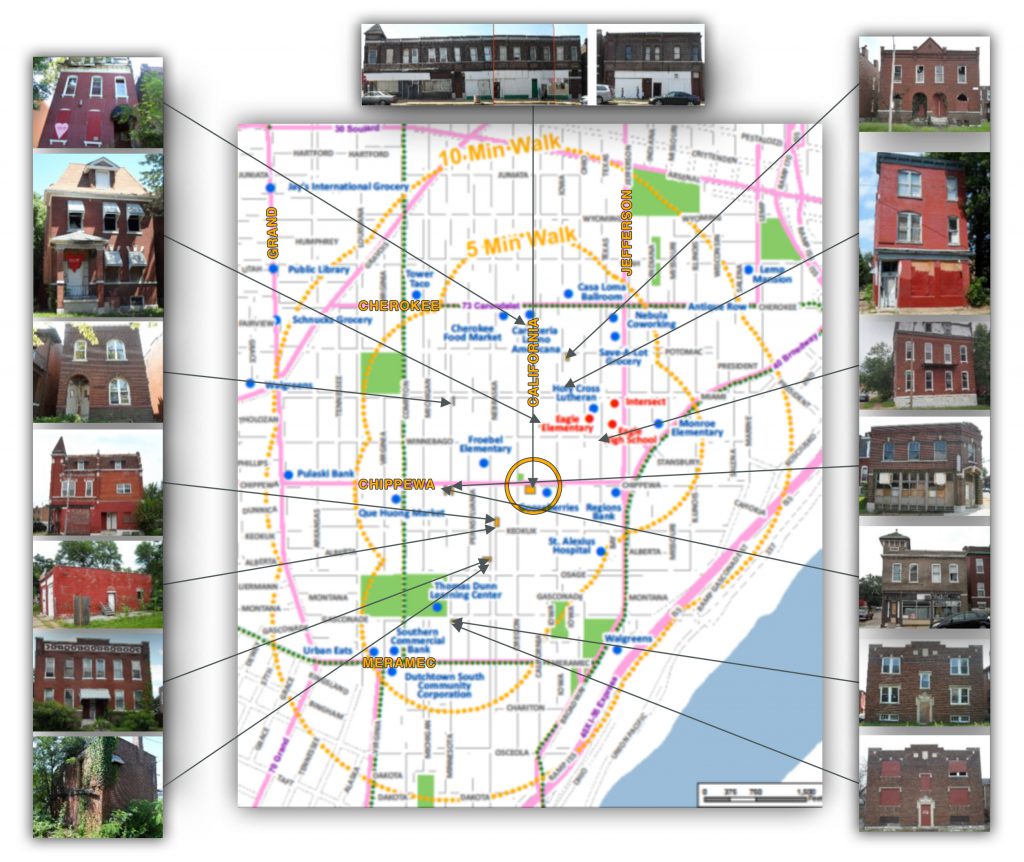 3022 Chippewa and 3100 Chippewa, on the SE and SW corners of Chippewa and Minnesota, respectively, will feature a small retail storefront and several two or three bedroom apartments (3 units in 3022 Chippewa and 4 units in 3100 Chippewa). “We wanted to preserve the retail spaces along Chippewa as much as possible to allow for future small business growth. Chippewa was once a more bustling commercial corridor with a streetcar, and we believe it’s important to encourage retail entrepreneurship neighborhood businesses growth.” – Rise Community Development 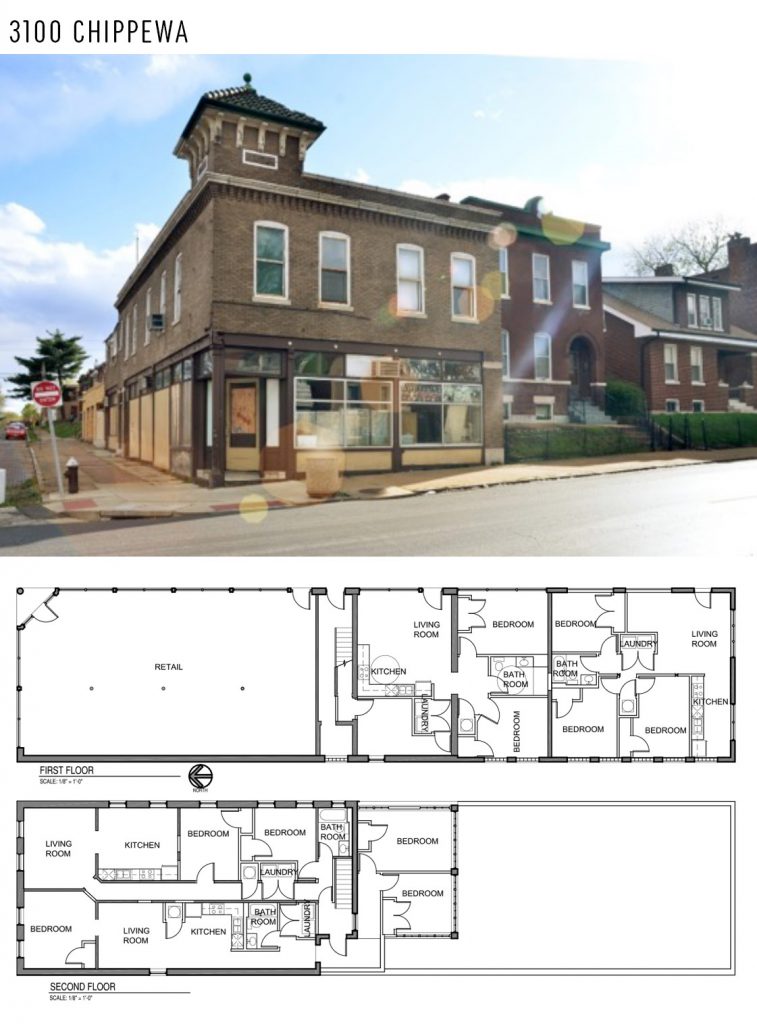 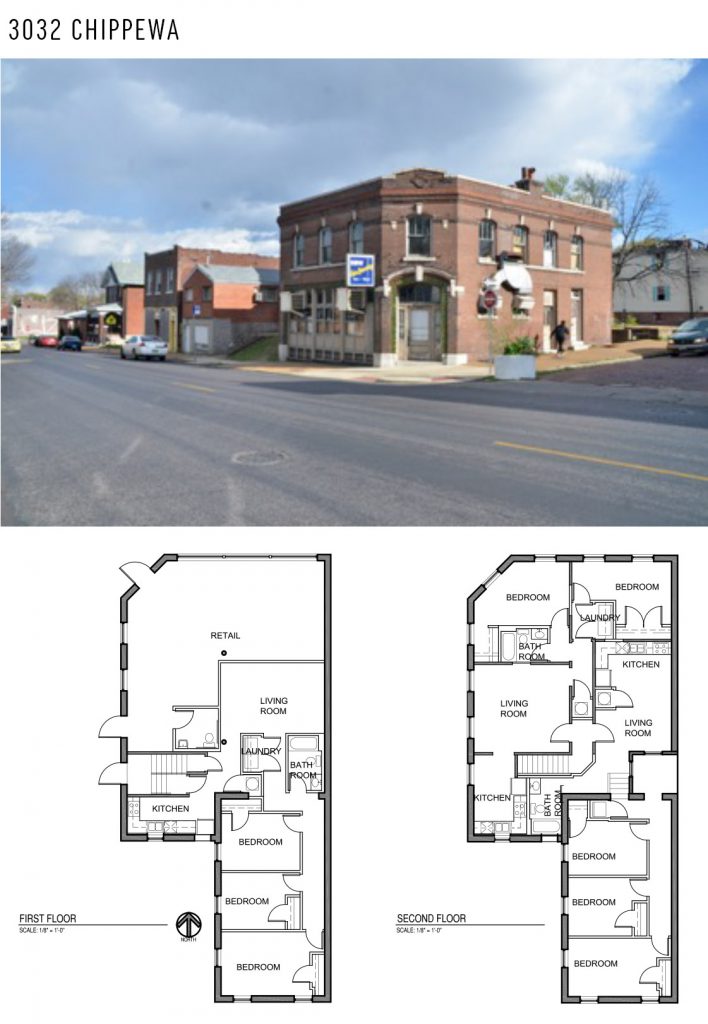 Census data shows the development area as having the highest population density in the St. Louis region. The City of St. Louis as a whole has 5,157 people per square mile, whereas Gravois Park has 11,886; and Dutchtown has 10,420. It is also notable that while having the highest population density, the area also has one of the highest rates of vacant buildings in the region with roughly 600 parcels owned by the city. “This is a very diverse and rapidly evolving area with catalytic potential,” said Stephen Acree, President of Rise. “ The area also has a large youth population with 31% of its residents under the age 18. It’s a section of St. Louis where Rise has partnered with community organizations and others to do significant neighborhood planning work and we are excited to be a part of the continued growth in these neighborhoods.”

The Chippewa Park project is the latest in a string of new developments in Gravois Park including the Intersect Arts project, a new EAGLE charter school, the renovation of the Bakers Union Building, and the residential conversion of the Louis Lange Publishing Co building at 3600 Texas.

Financing for the Chippewa Park project includes approximately $5.5 million from state and federal low-income housing tax credits, $4 million from historic tax credits, and $300,000 in federal HOME funds awarded and administered through the Community Development Administration of the City of St. Louis. The project is being developed by Rise Community Development in collaboration with Lutheran Development Group. The architect is Urban Werks and E.M. Harris is the general contractor. Property management services will be provided by Fox Grove.

Editors Note: The author is an investor in multiple properties on Chippewa Street.