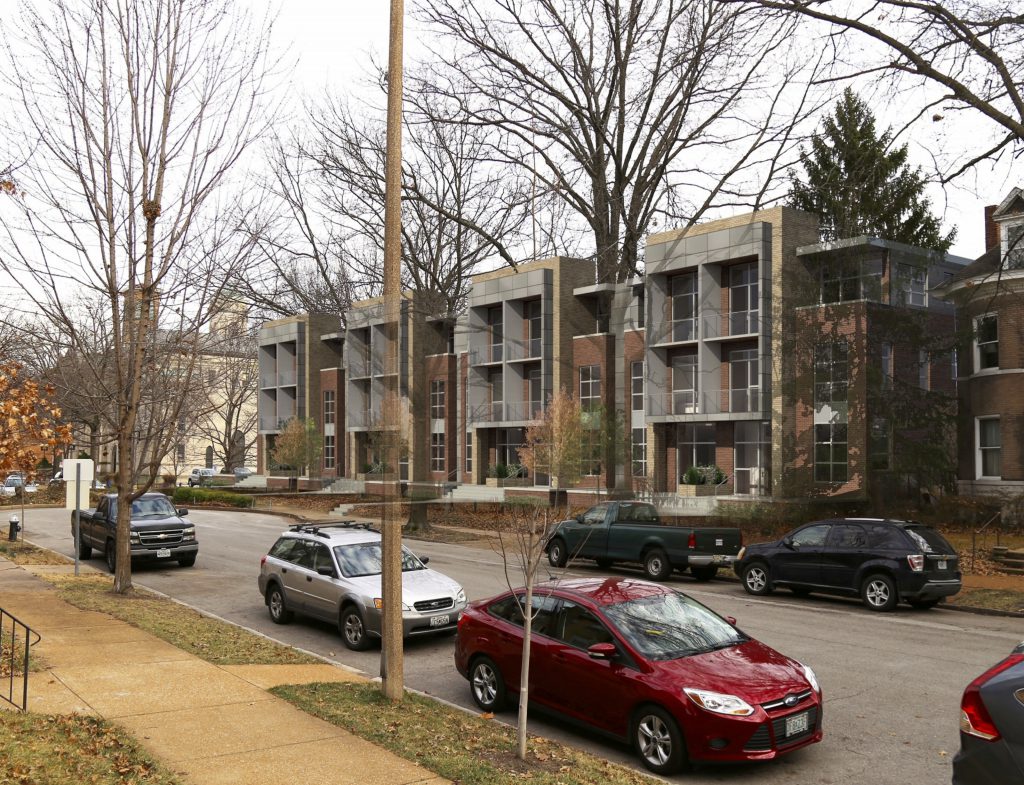 Architectural design for eight proposed townhomes on Washington Place are being tweaked in an effort to win approval from the neighborhood and the city’s Cultural Resources Office (CRO) and Preservation Board. Initial sketch renderings are below.

New renderings show a more segmented facade for the project proposed for the parking lot of St. John’s Methodist Church. The design of the project will be dictated by local historic district guidelines The alterations seem to have been met favorably by the Central West End Association (CWEA) Planning & Development Committee.

A letter sent to the city’s Preservation Review Board, which will consider a recommendation from the CRO, states in part that the committee concluded that the proposed use is appropriate for the site and that they prefer the new design over the prior one. It also states that final design details and material selection will be critical to the success of the design (read the full letter). The project is set to be considered at the February 27 Preservation Board meeting. 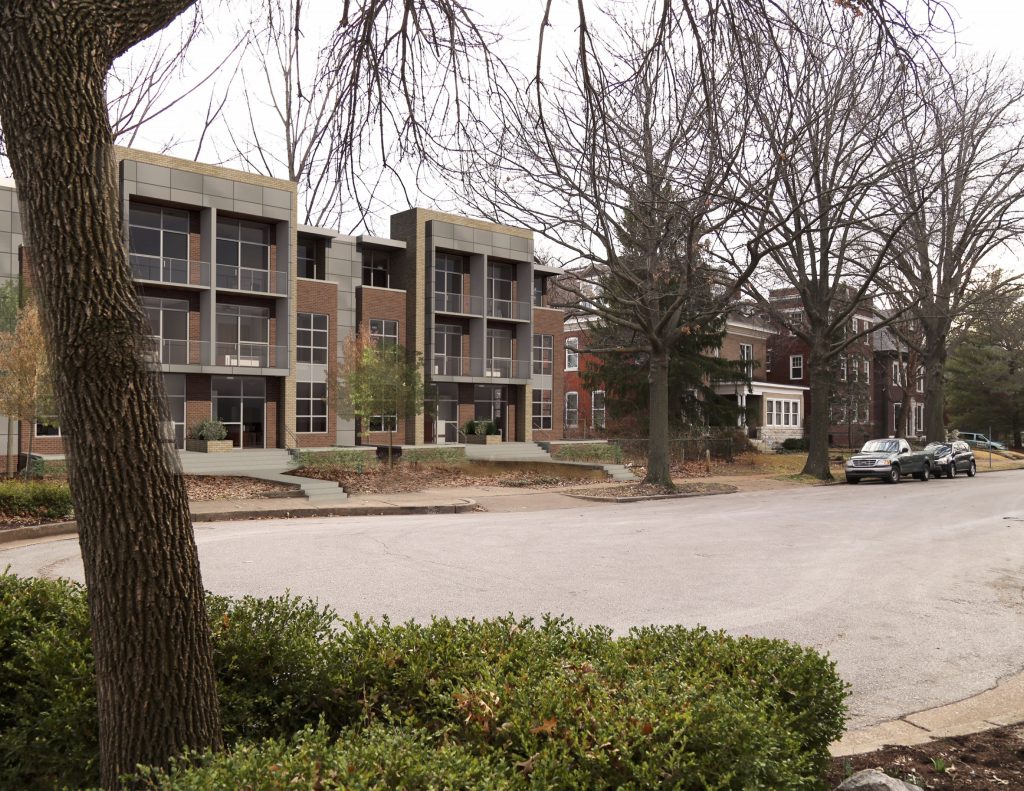 A development featuring eight three-story townhomes is being proposed for the surface parking lot of St. John’s Methodist Church, one of the landmarks of the Holy Corners Historic District. The district has seen development plans come and go, with Link Auction Galleries occupying St. John’s, but Cathedral Square Brewery showing no movement on its long-held plans to open in the Second Baptist Church across the street at 500 North Kingshighway.

Plans for the townhomes appear to be getting pushback from the city’s Cultural Resources Office that will most likely result in design revisions. While the project’s height, mass, scale, and location is deemed to “mostly comply” with the strict Central West End Local Historic District, fenestration shows substantially more glazing (larger windows occupying the facade) than other buildings found in the district.

The project is proposing no new curb cuts, with access via an existing alley. Any request for tax abatement or other incentives has not been made public. In general, townhome development such as this represents progressive and small land use. Such homes produce significantly more property tax revenue and add more residential density to the city than stand-alone single-family homes, or large historic mansions. 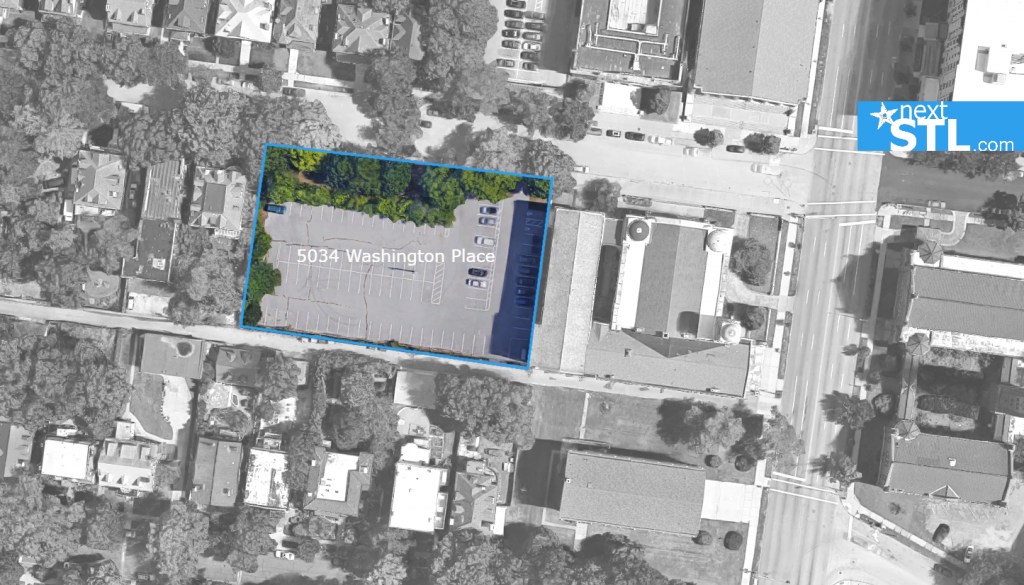 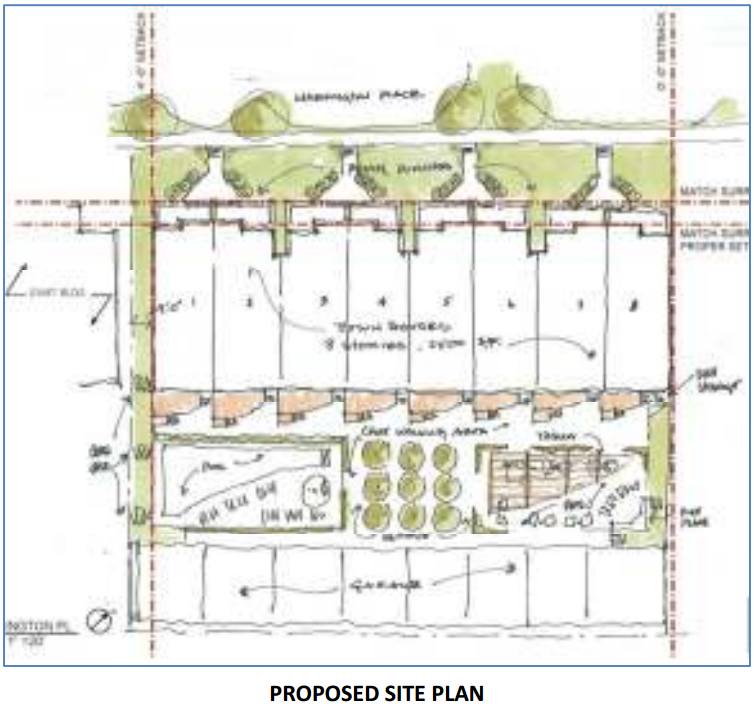 THE PROPOSAL: The applicant proposes to construct eight three-story attached townhouses on a portion of the current parking lot behind St. John’s Methodist Church (now converted to commercial use) in the
Holy Corners Landmark District. The townhouses will extend west of the existing cul-de-sac into Washington Place.

RECOMMENDATION: That the Preservation Board withhold preliminary approval of the proposed design as it does not comply with the Central West End Historic District Standards.

PRELIMINARY FINDINGS & CONCLUSION: The Cultural Resources Office’s consideration of the Central West End Historic District standards for New Construction or Additions to Existing Residential or Institutional Buildings led to these preliminary findings.
• 5034 Washington Place is located in the Central West End Local Historic District.
• The Central West End Standards for New Construction require that new buildings replicate the siting, massing, scale, street rhythm and exterior materials of adjacent buildings.
• The proposal is to construct a large building consisting of 8 attached townhouses. While attempts have been made to translate this large structure into a more sympathetic design, the mass and scale of the building, as well as the substantial use of stucco and large expanses of fenestration depart from the vocabulary expressed by historic buildings on Washington Place.

Based on these preliminary findings, the Cultural Resources Office recommends that the Preservation Board withhold preliminary approval of the proposed design as it does not comply with the Central West End Local Historic District standards. 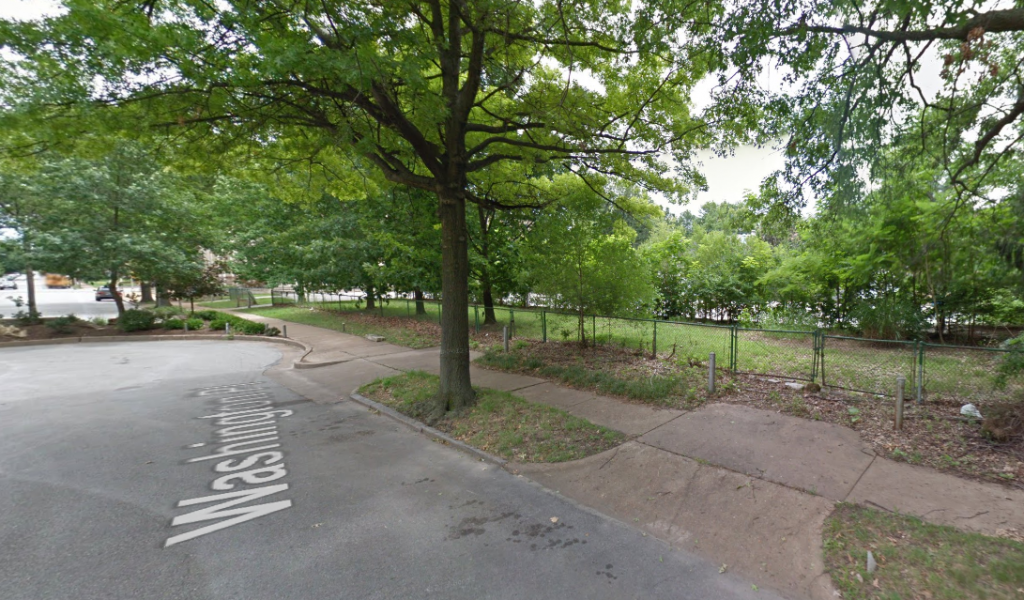