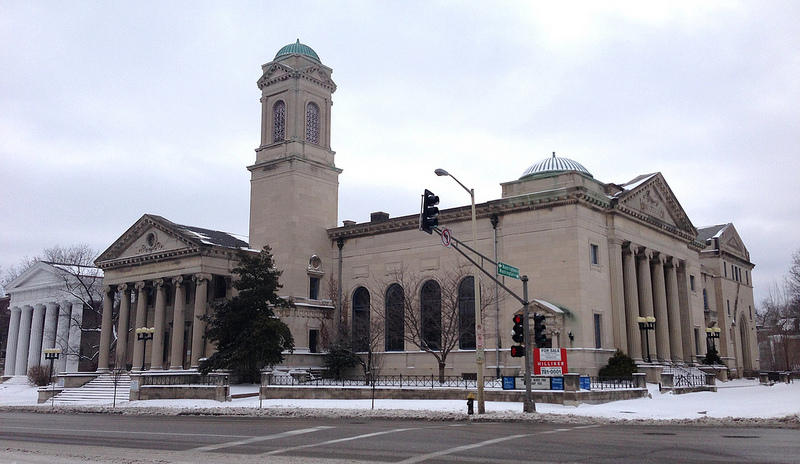 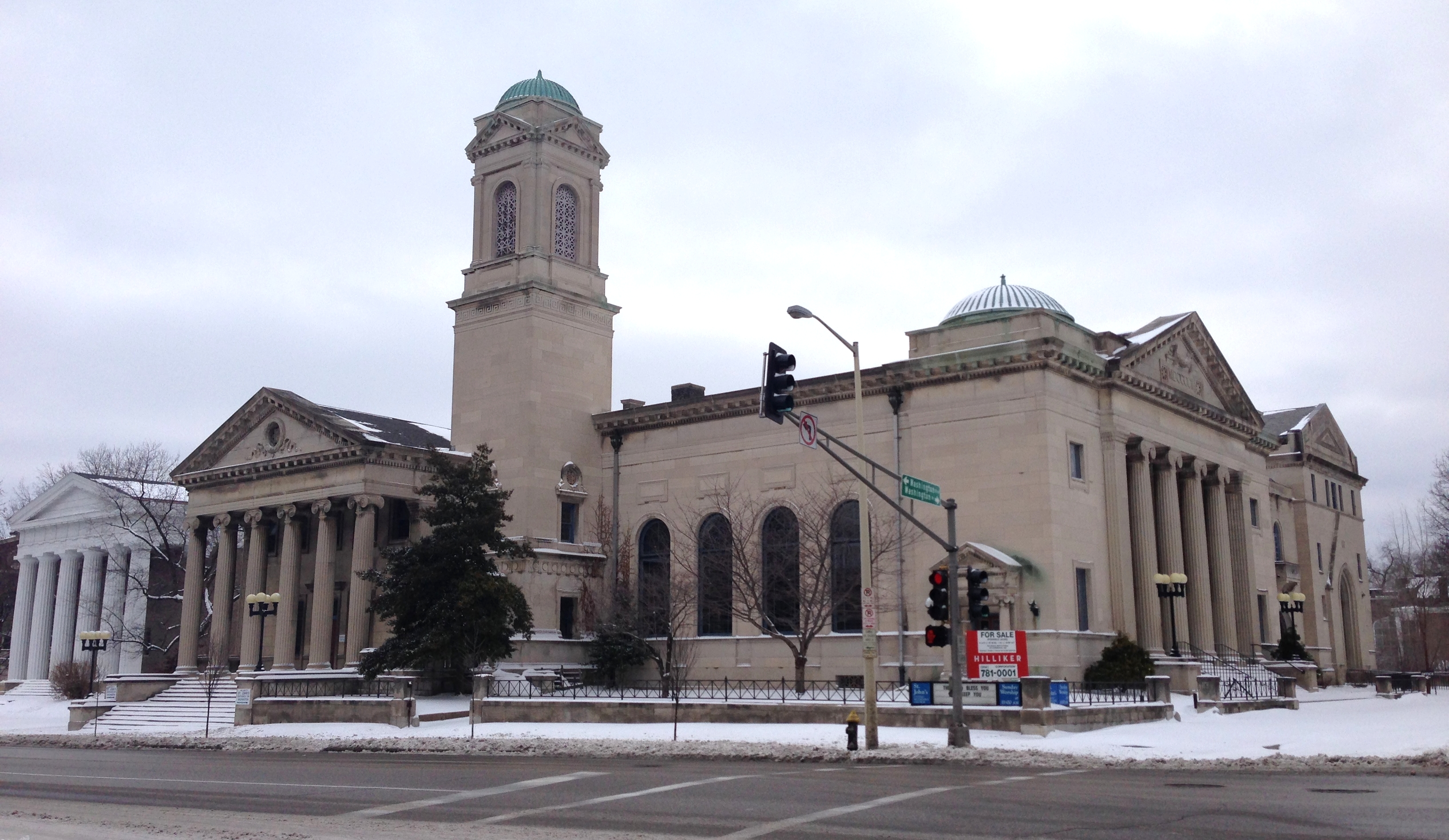 An ambitious schedule may see the new Link Auction Gallery open in the long vacant St. John’s United Methodist Church at 5000 Washington Boulevard in late spring. According to the St. Louis Post-Dispatch, seven employees recently left the troubled 184-year-old Ivey-Selkirk auction house in Clayton to open the new venture. The Central West End property had a listing price of $950,000. A final sale price has not be disclosed.

For years different uses have been proposed for the vacant buildings at what is known as Holy Corners, a collection of monumental institutional buildings. Music venues and other uses have found opposition from nearby neighbors concerned about noise and traffic. In addition to 5000 Washington, nextSTL has learned that nearly two years after an initial announcement, plans by Cathedral Square Brewery to move into the Second Baptist Church at 500 North Kingshighway are moving forward.

Vacant for the better part of the past decade, St. John’s will house a new fine art auction house named for the building’s architect, Theodore Link. In St. Louis Link is best known as an architect of the 1904 World’s Fair and the city’s Union Station. Several steps remain before opening, including closing on the property, but the would-be owners are confident that funding and planning are in place. Dustin Bopp and Bopp Architecture will be designing and restoring interior spaces. 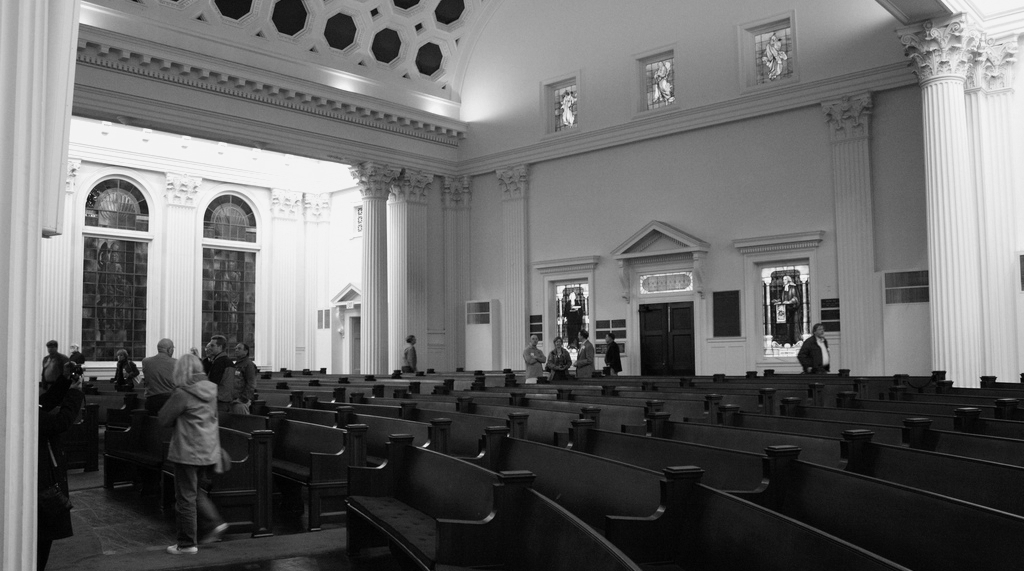 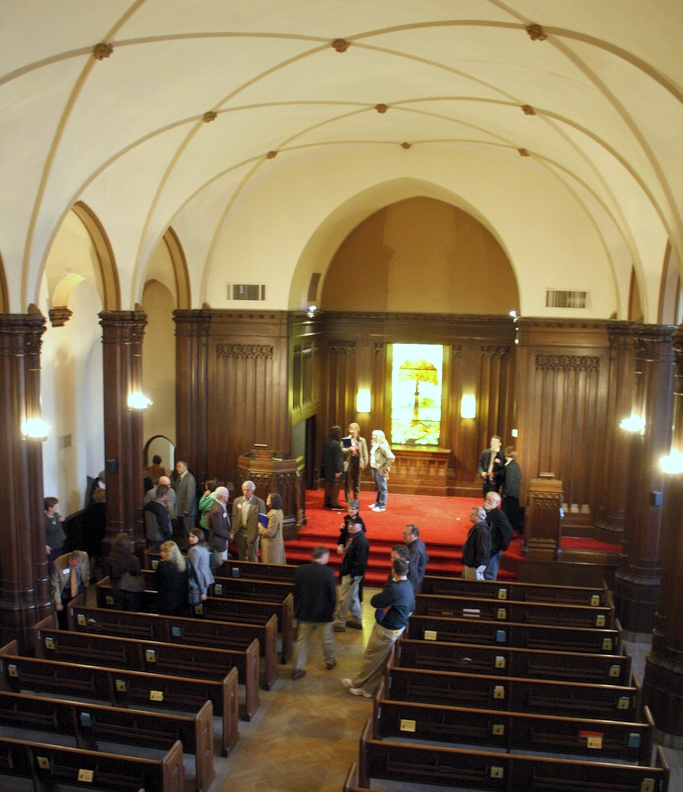 The schedule is aggressive, but according to a member of the ownership group, the vast majority of the architectural details that attracted the business to St. John’s are still in place. Link Auction Gallery is planned to first open in the smaller of the church’s two main spaces, a 3,800sf chapel (right – image by Dustin Bopp), eventually using the larger of the two for auction space as well. The main sanctuary is approximately 6,000sf.

Additional spaces include a 5,000sf auditorium, office spaces, meeting rooms, and a full kitchen. The lot measures 1.55 acres and includes a 93 space parking lot. Even with office space and room for storage, the auction house doesn’t plan to utilize the entire 41,000sf complex. Envisioned is space for complimentary small businesses, including art shipping, conservation, and more. Think of it as something of a fine art incubator, using today’s parlance.

According to nextSTL sources, the Cathedral Square Brewery has purchased brewing equipment for the 500 N. Kingshighway space and plans to be producing beer at the location in 2014. A restaurant and event space would open in 2015. Owners Dr. Gurpreet Padda and Ami Grimes once considered moving another of their ventures, Sanctuaria, currently in The Grove, to this location.

Cathedral Square is one of a growing number of St. Louis craft breweries to expand. According the numbers published by the Brewers Association, the brewer produced 250 barrels in 2010, 750 in 2001 and 1,000 barrels in 2012. A previous estimate of $3.5-4M for the brewery project is reportedly still accurate. Most of Cathedral Square beer is currently brewed on contract in Wisconsin.

In addition to finding new uses for beautiful, but large and challenging buildings, bringing life to St. John’s and the Second Baptist church will help this segment of Kingshighway feel more a part of the Central West End instead of a high speed pass through on the edge of the neighborhood. With tenants set to draw consistent customers, the new stakeholders may help push for better crosswalks, corner bumpouts to narrow the pedestrian crossings, or other amenities. 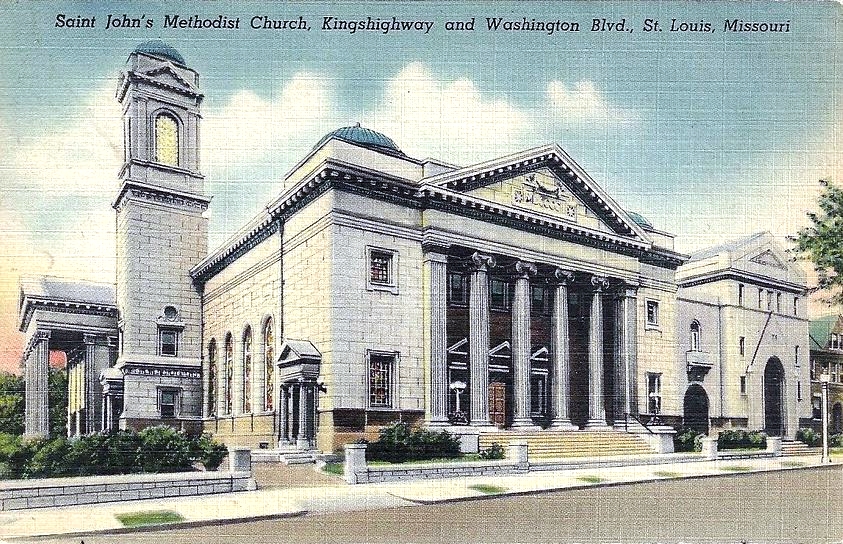 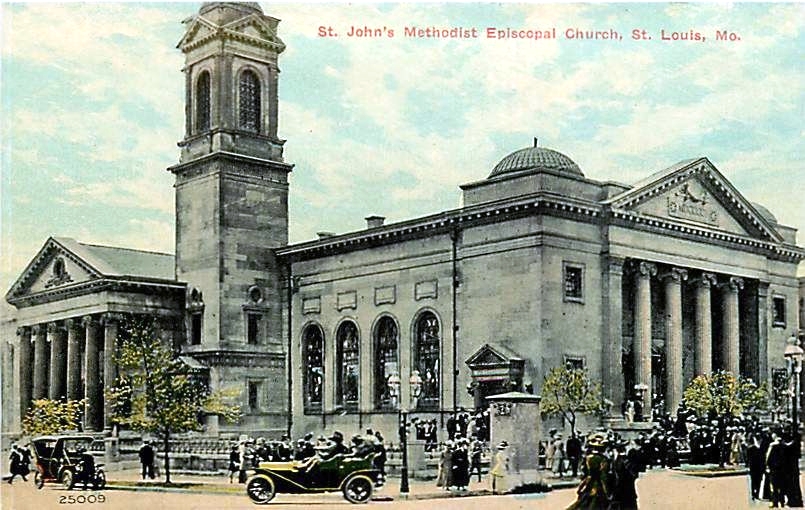 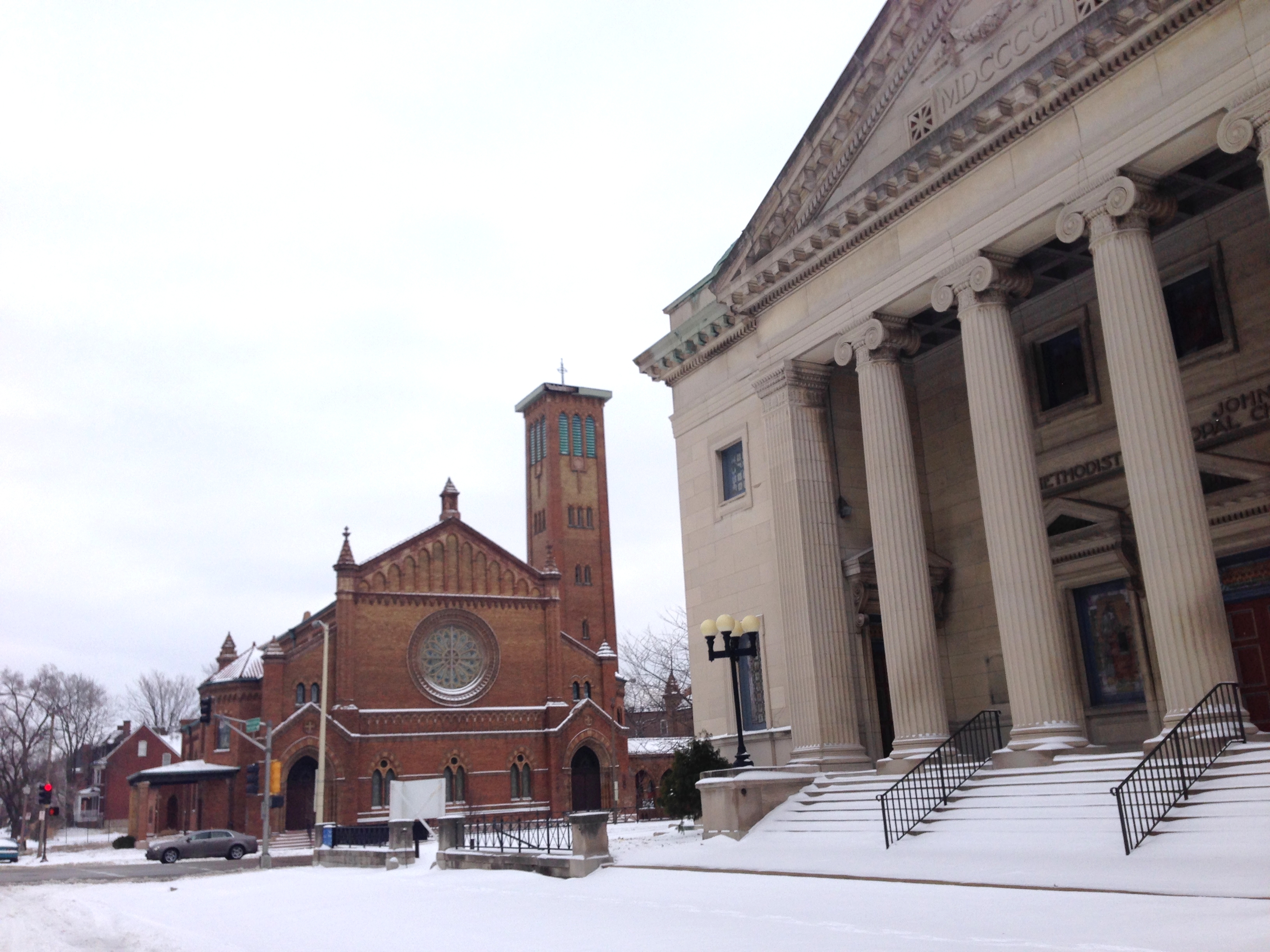 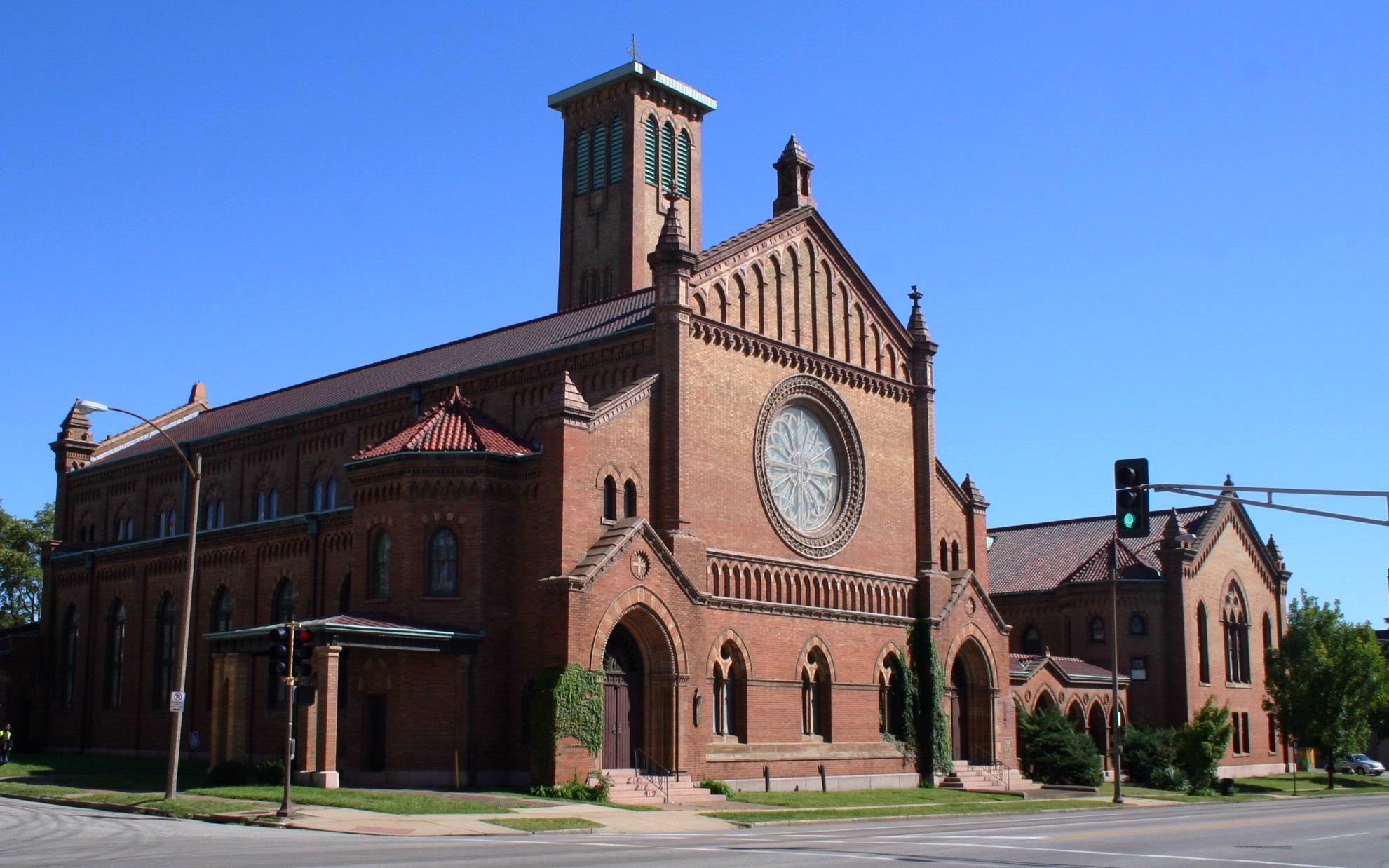 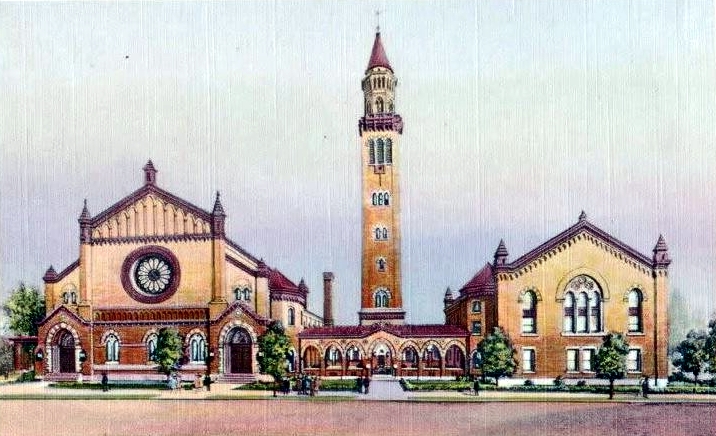 Just wanted to let everyone know that the Cathedral Square Brewery has purchased a church on 500 north Kingshighway in St. Louis. We are currently meeting with architects and engineers to draw up the floor plan for the brewery and the brewpub. Our plan is to start on the brewery side of the project first and then continue with the brewpub side of the construction once the brewery is going. We will keep you updated on the progress as it continues. On a side note, brewmaster Brian Neville has begun brewing our company’s beer in Ste. Genevieve MO. The former brewery that we were working with has decided to go in a different direction and is leaning to producing all cans. In turn we contacted the owners of Crown Valley Brewing Company and worked out a relationship that allows us to use there equipment to produce our beers. Although we hated to end with Weston Brew Labs, the quality of the brewing equipment and resources that we have access to at Crown is unmatched. Our first batches from Crown Valley are starting to hit the shelves and the feedback has been overwhelmingly positive. The flavor profiles have changed a bit and the belgian nuances are more prominent in the beer. We are moving in a good direction with both of the new developments. Thank you for your continued support of our journey.