Today U.S. Housing and Urban Development (HUD) Secretary Julián Castro announced the next big federal award, a $29.5M Choice Neighborhood implementation grant. Other cities among the 34 applicants to be chosen were Boston, Camden, Denver, and Louisville.

In September, St. Louis was announced as a finalist. To arrive at that point required more than 100 public and planning meetings. In March a Near North Side Master Plan (PDF) was presented by project partners the City of St. Louis, McCormack Baron Salazar, and Urban Strategies. That plan focused on codifying a neighborhood vision and identifying development partners.

It was this process, the designation of the area as Promise Zone and a Department of Justice innovation grant, and the coming $2B NGA project that led to the award. Clearly these projects, though not coordinated, do feed off and support one another. The DOJ grant is a $1M three-year award to address crime and public safety in the Carr and Columbus Square neighborhoods. 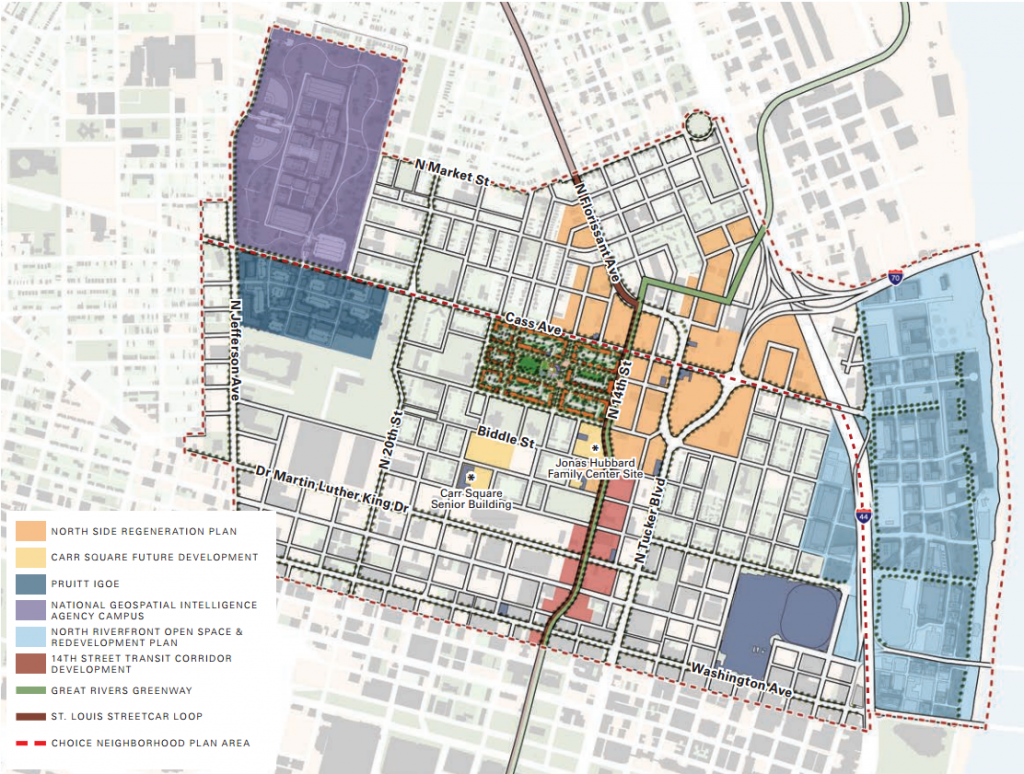 A visual guide to understanding plans for the Preservation Square apartment complex from the Near North Side Master Plan presentation, March 2016: 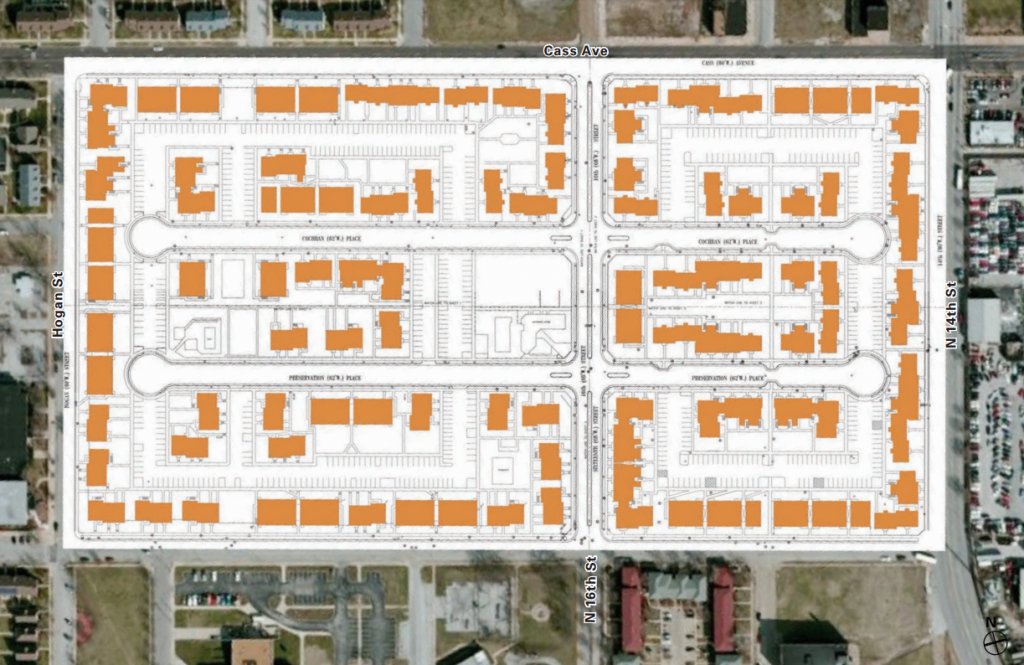 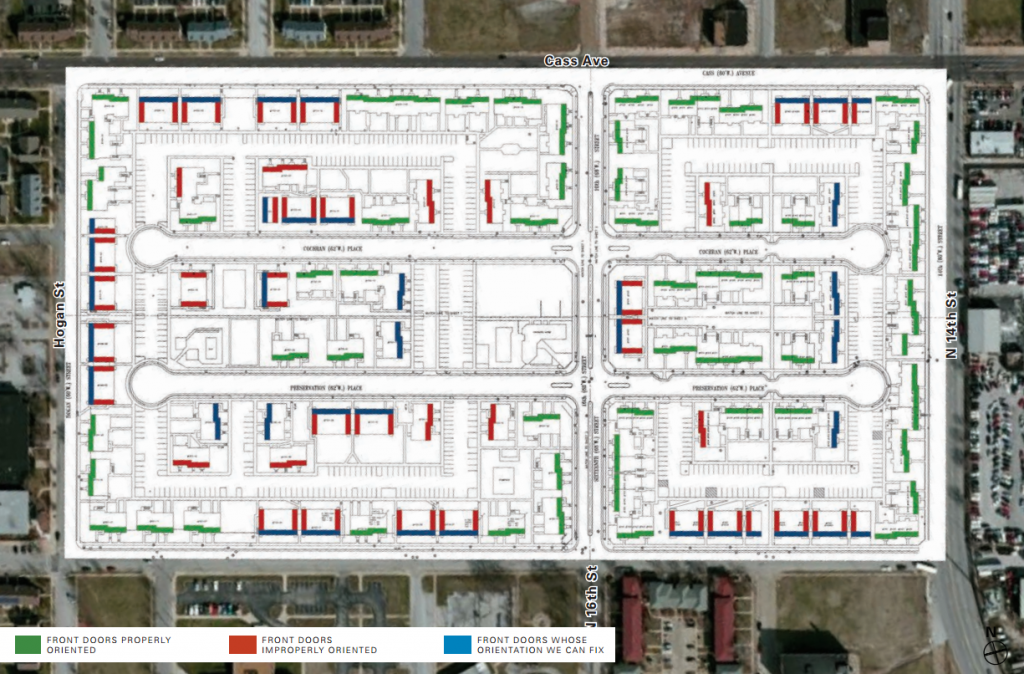 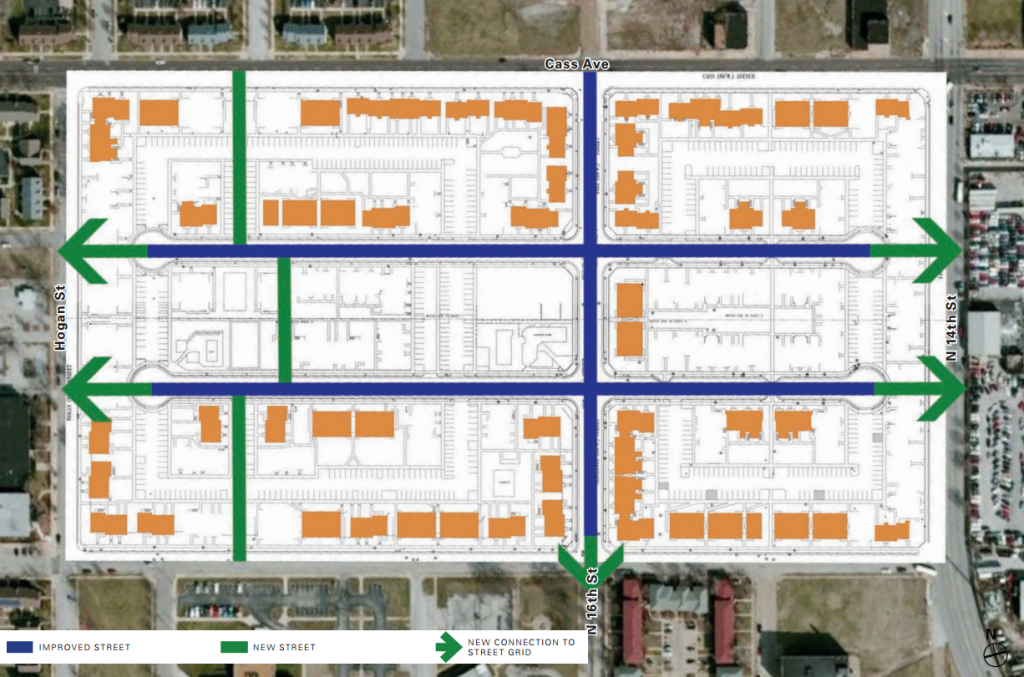 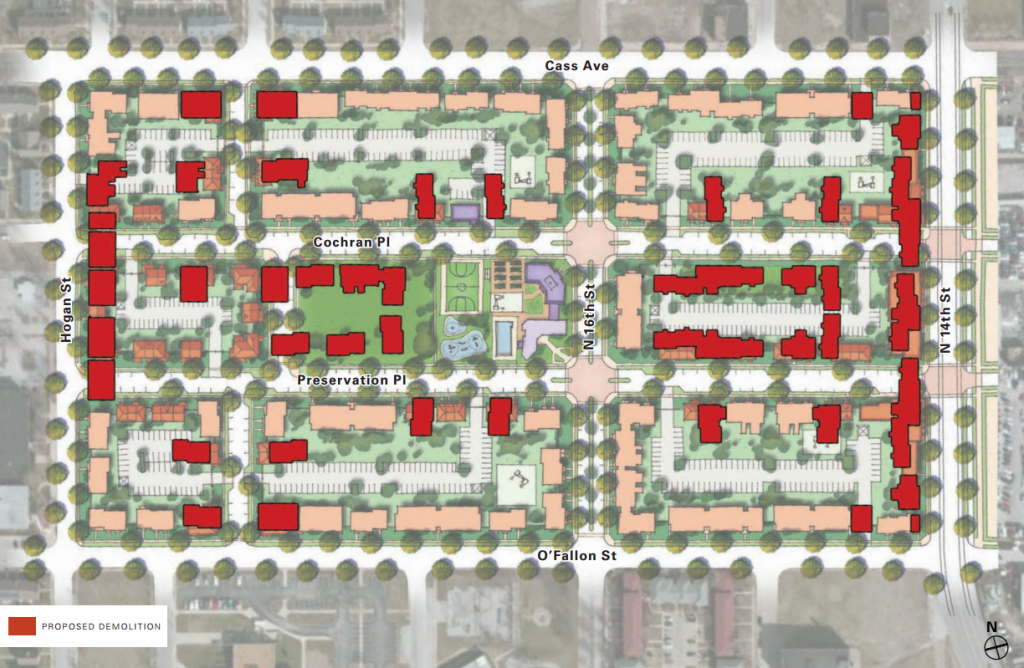 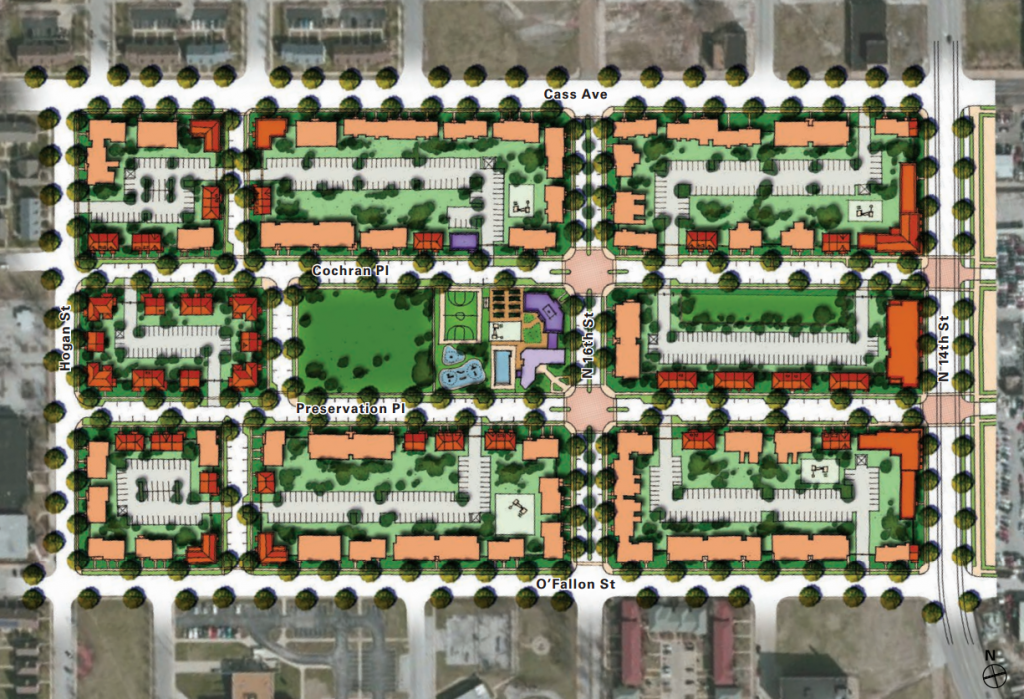 What’s coming as a direct result of today’s announced award is the remaking of Preservation Square, a Section 8 apartment complex. The area will see a reduction in overall housing units, renovation and new construction, as well as a restored street grid. This part of the project is innovative in several ways, but the planned reduction in housing density should be rethought.

As the city continues planning for a hoped-for north-south light rail line, increasing density, including in Preservation Square, should be the goal. Here, the particulars of the redevelopment plan, and the reintroduction of some city streets, presents a challenge in adding and maintaining density, and yet it can be done, and again, should be the goal.

The plan for the new Preservation Square imagines a reduction of 317 housing units from the current 675, than an addition of 204. While final numbers are not set, the HUD announcement states that Preservation Square will total 555 units once completed. Another 140 mixed-income units will be completed with the renovation of a nearby building called the Brewery. The specific building and address are not specified. 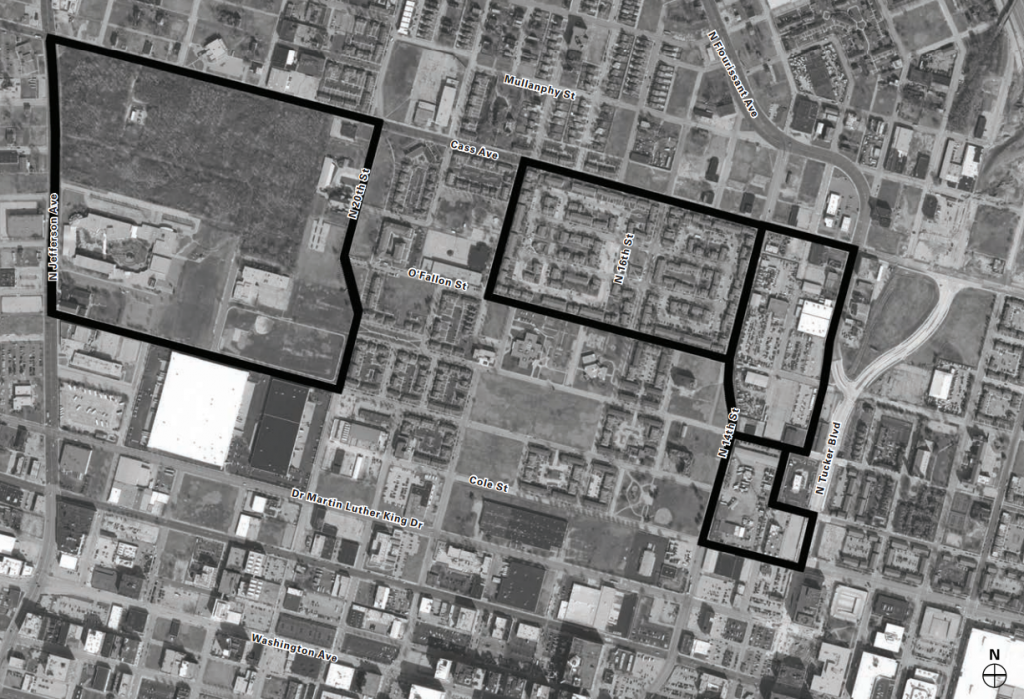 {superblocks identified by the Near North Side Transformation Plan} 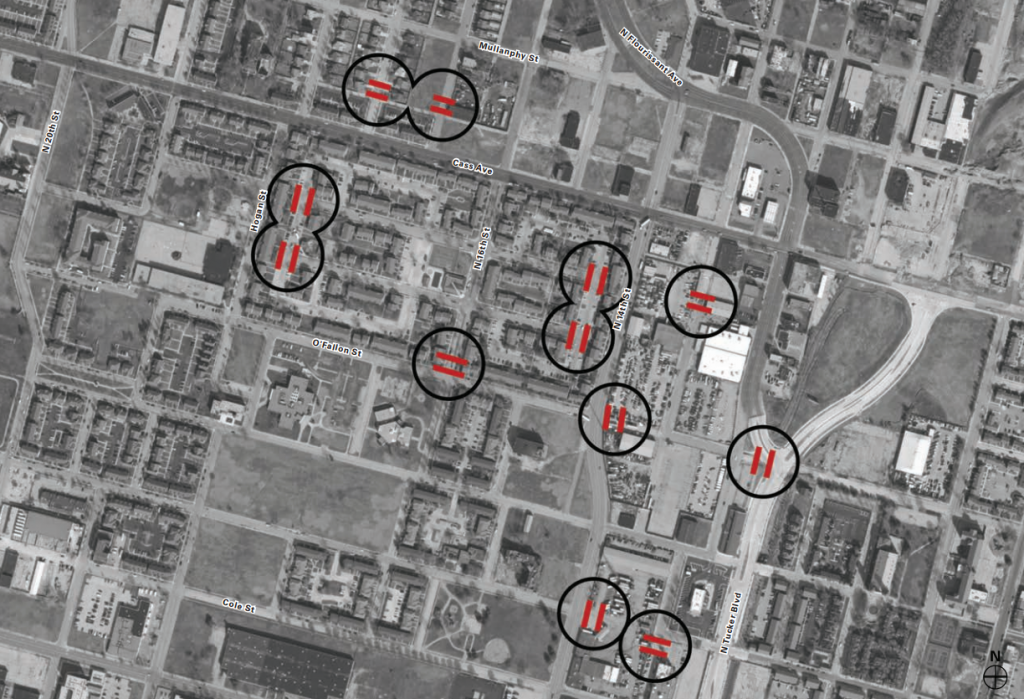 {existing street closures identified by the Near North Side Transformation Plan}

While Preservation Square is the housing project at the center of the HUD Choice Neighborhood plan, the city hopes to support bigger adjacent initiatives. The north-south rail line, and plans for a bicycle-pedestrian greenway are included in plan objectives.

According to the draft Near North Side Transformation Plan (PDF), long-vacant Carr School would be renovated as a community center and new recreation center would be constructed on an adjacent site. The Downtown Y, which has been the closest operation recreational facility for neighborhood residents could operate the facility. 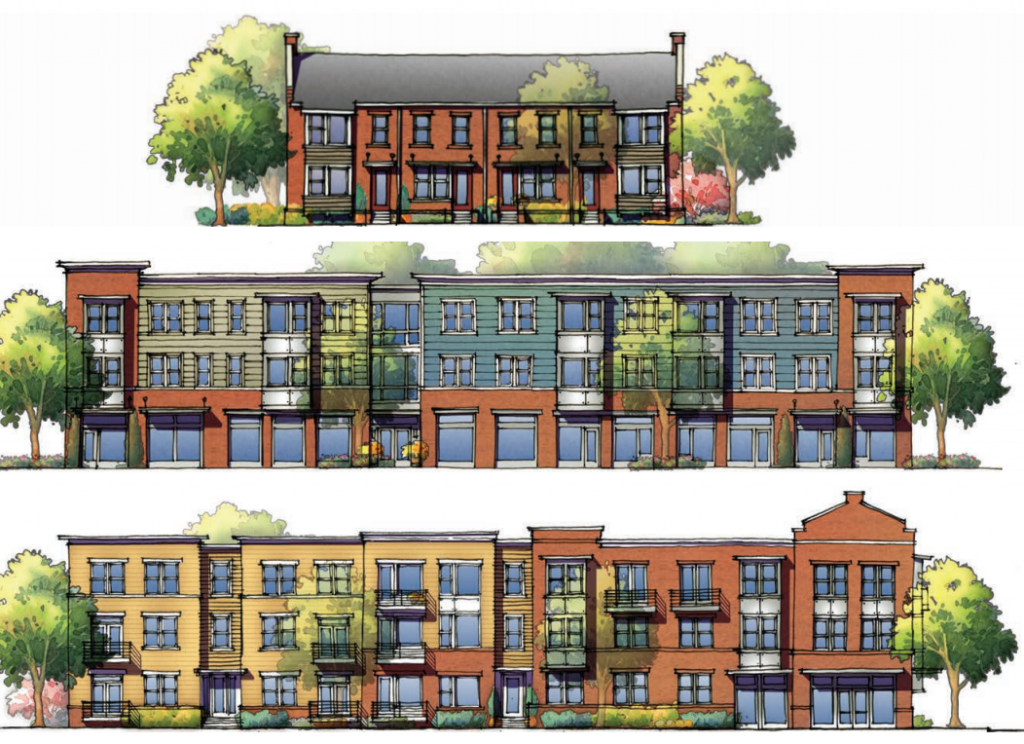 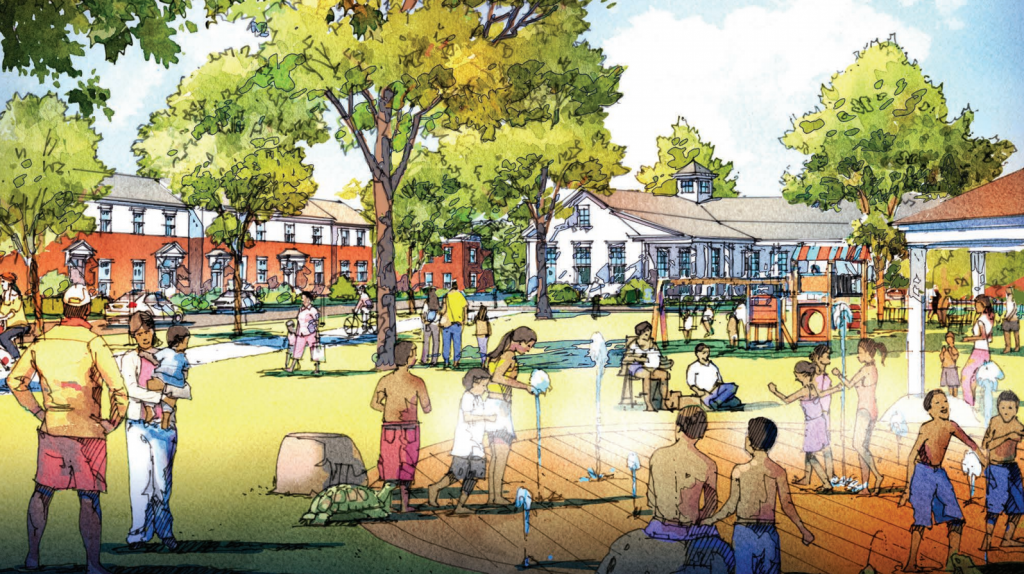 While the announcement is big news for St. Louis, and several important projects now have the green light, it’s not clear what the larger implications are for NorthSide Regeneration, developer Paul McKee’s 1,500-acre redevelopment zone. With NGA, some small developments along 14th Street, the light rail effort, and more, there are as many moving pieces as there are vacant lots. But perhaps the Choice Neighborhood award will jumpstart more focused and smart development of the area that is set to change more than any other in St. Louis in the coming decade.

Project Overview: The City of St. Louis has been awarded a $29.5 million FY2016 Choice Neighborhoods Implementation Grant for the Near North Side neighborhood. Located directly north of downtown St. Louis, the Near North Side is cut off from downtown by warehouses, vacant parcels, and the distressed Preservation Square project-based Section 8 housing development. With a FY2014 Choice Neighborhoods Planning Grant, the City of St. Louis, Urban Strategies, and their partners created a plan to revitalize the Near North Side. Armed with their strategic, community plan and a Choice Neighborhoods Implementation Grant, the City and their partners will create 695 new mixed-income housing units; re-purpose historic but blighted properties into housing, retail, and commercial uses; increase access to loans for small businesses and homeowners; improve access to healthy foods; and offer evidence-based education and employment opportunities.

Neighborhood Background & Vision: The City of St. Louis, Missouri, in partnership with McCormack Baron Salazar and Urban Strategies, will use $29.5 million in Choice Neighborhoods funding to help the Near North Side neighborhood regain the level of stability and vibrancy it once possessed as a primary gateway to downtown St. Louis. Although adjacent to downtown, massive multi-block warehousing operations and vacant or underutilized properties fragment the neighborhood from the downtown grid. The street grid is also broken within the super-blocks of the distressed Preservation Square housing complex, further isolating the community from the rest of the neighborhood and downtown.

Despite these challenges, the City, Urban Strategies Inc. and other dedicated neighborhood stakeholders have been laying the foundation for change. Through a 2014 Choice Neighborhoods Planning Grant residents, community stakeholders, and institutional partners worked together to design robust strategies that build on assets and address the neighborhood’s most critical challenges. The resulting Transformation Plan has become a catalyst for community action and the central organizing platform.

The Near North Side neighborhood is also part of the St Louis Promise Zone designation and has since become the target of a Department of Justice Byrne Criminal Justice Innovation grant. Partly because of these planning efforts, the City has been successful in attracting the National Geospatial-Intelligence Agency’s (NGA) $1.8 billion western headquarters to locate just outside the Near North Side in an underdeveloped area.

The award of the new Choice Neighborhoods Implementation Grant will ensure that this game-changing investment and the efforts of local leaders and community stakeholders catalyze transformation in the Near North Side. The Choice Neighborhoods award and additional leverage will fund the redevelopment of the distressed Preservation Square housing complex, a development of 342 project-based Section 8 units. A total of 555 mixed-income units in garden-style apartments and townhouses will be renovated or constructed on-site, with a restored street grid and contemporary designs. Another 140 mixed-income units will be created through the renovation of a historic building called The Brewery, which also aims to attract millennials and employees of NGA whose new headquarters will be a block away.

Through a network of high-capacity local partners, the City and Urban Strategies will ensure families are able to achieve their education, health, and employment goals. Local workforce partners and community colleges will offer coordinated services, including job readiness training; hard skills training in child care, healthcare, manufacturing, and
small business development; and job placement, retention, and advancement supports. Financial counseling will be offered to help families build their credit and savings. St. Louis Public Schools along with local early learning, after school, and community college partners will implement a cradle to college/career pipeline.

The resurgence of the Near North Side will also depend on increasing the quality of neighborhood housing; boosting retail and business opportunities; improving access to quality food; and increasing access to family centered activities. The City of St. Louis will lead these efforts, including providing home improvement loans to low- and moderate-income homeowners; converting a vacant historic school building into a dynamic community center; and partnering with a mobile grocery store to sell fresh foods while planning to attract a full-scale grocery store as the neighborhood develops. A cornerstone of the neighborhood revitalization plan is to bring 7 live-work housing units and 2,400 square feet of commercial space along the 14th Street corridor, offering families opportunities to start businesses and easing the entry costs for businesses locating or expanding in the Near North Side.

A visual tour of Carr School – all images by Paul Sableman: 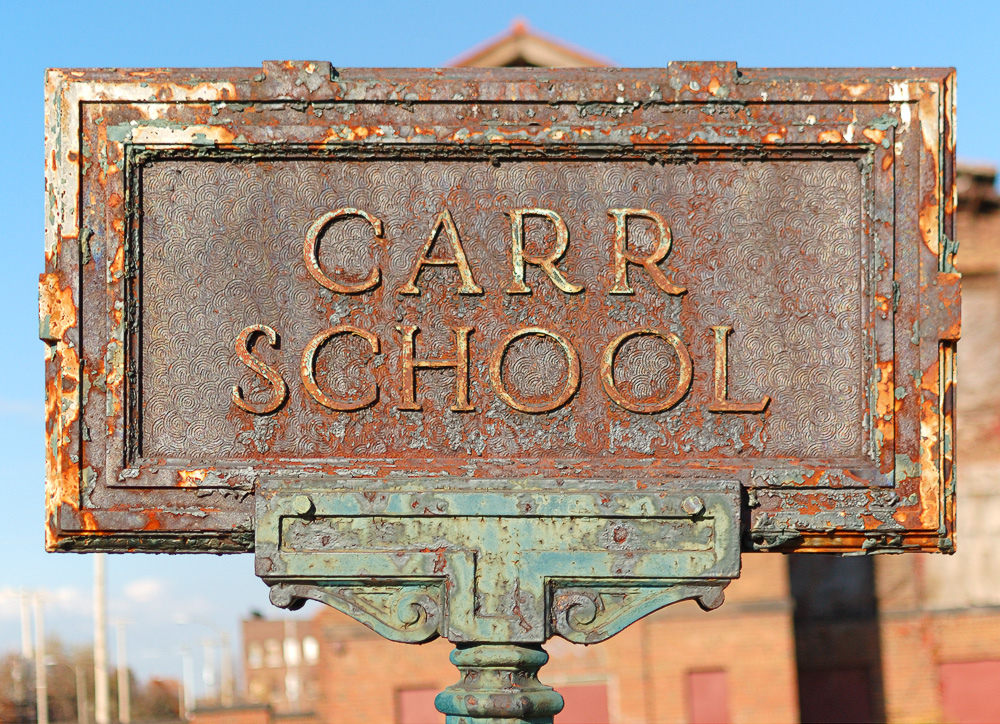 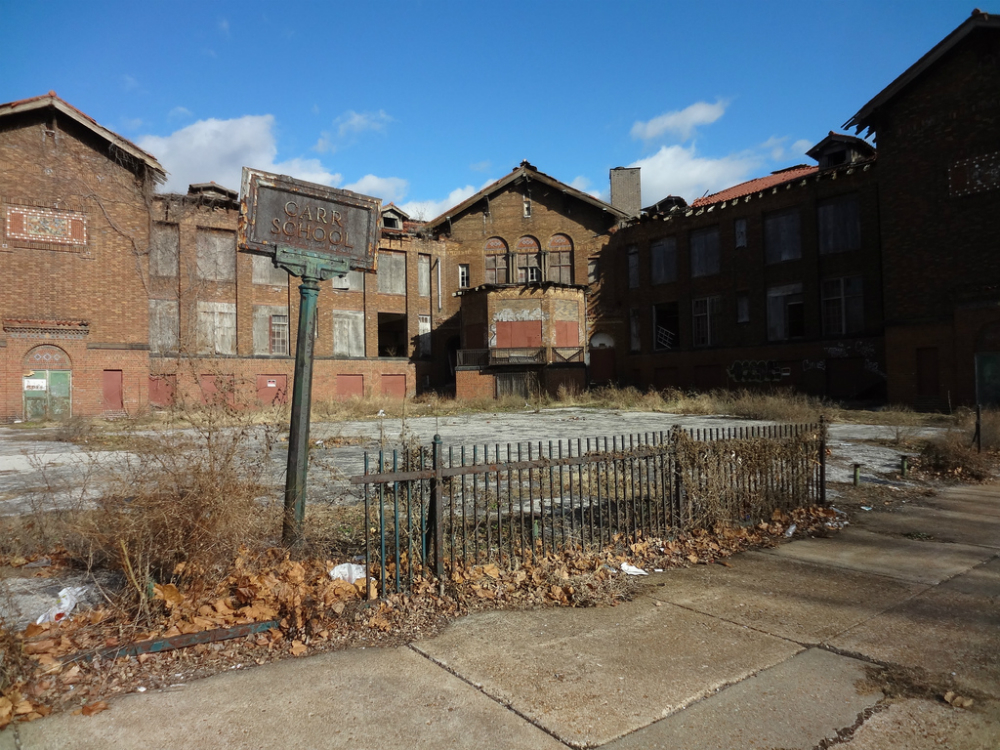 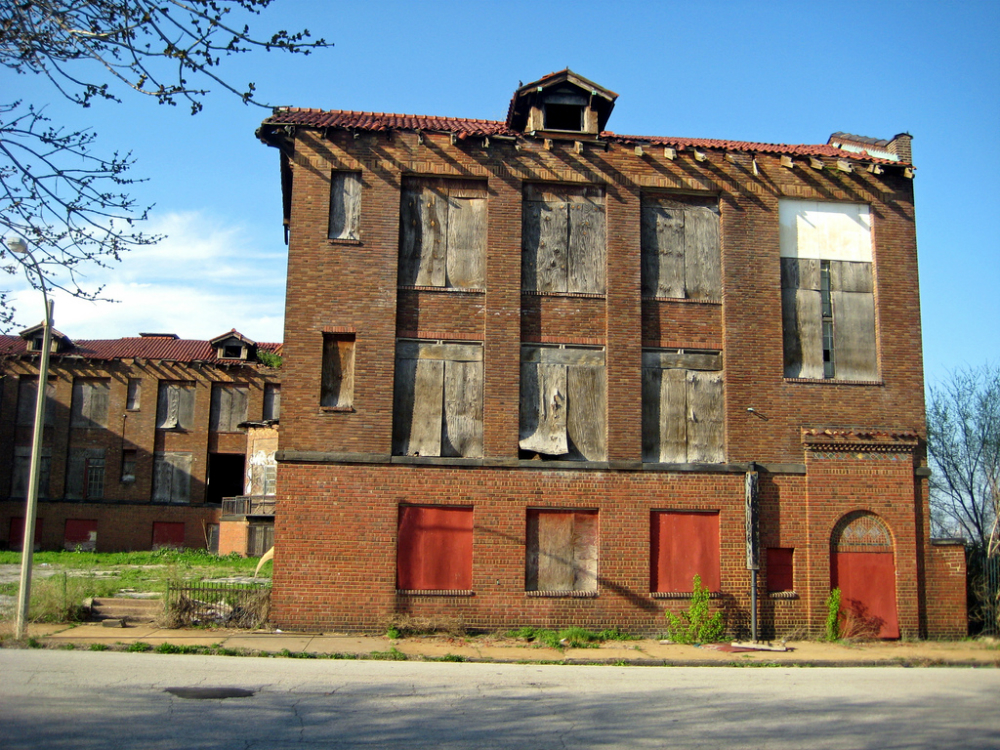 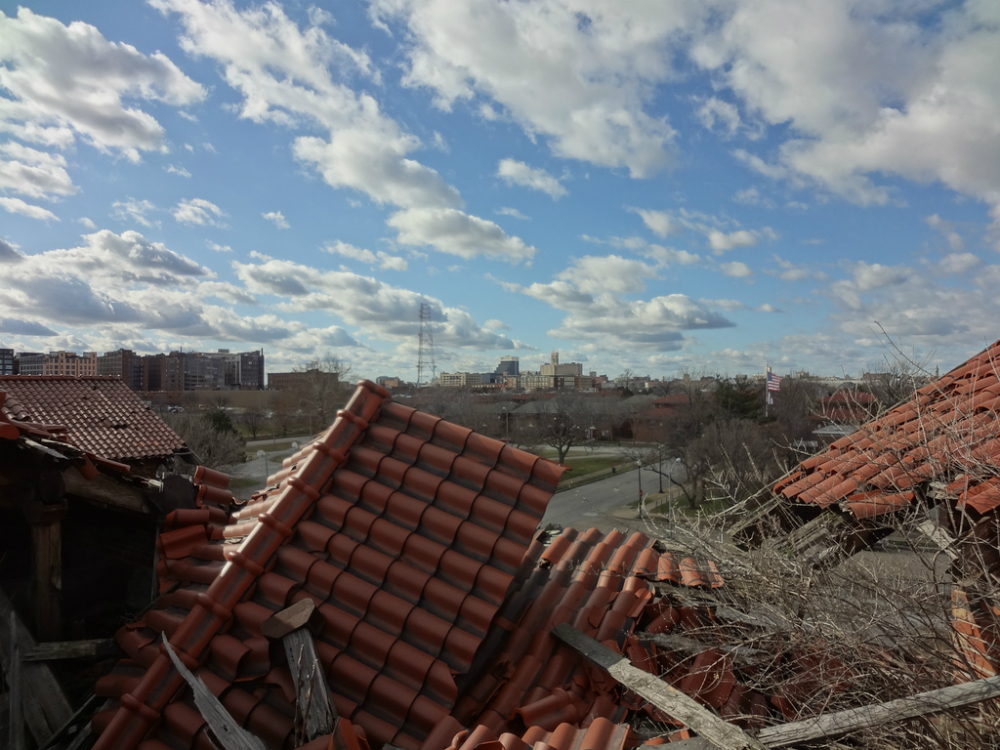 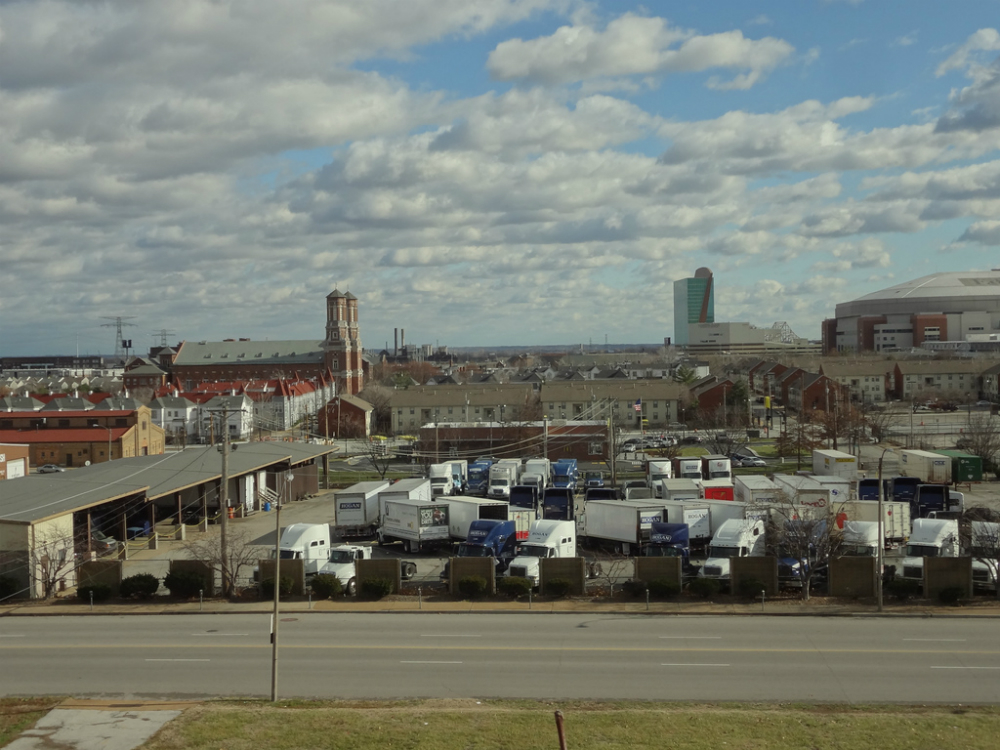 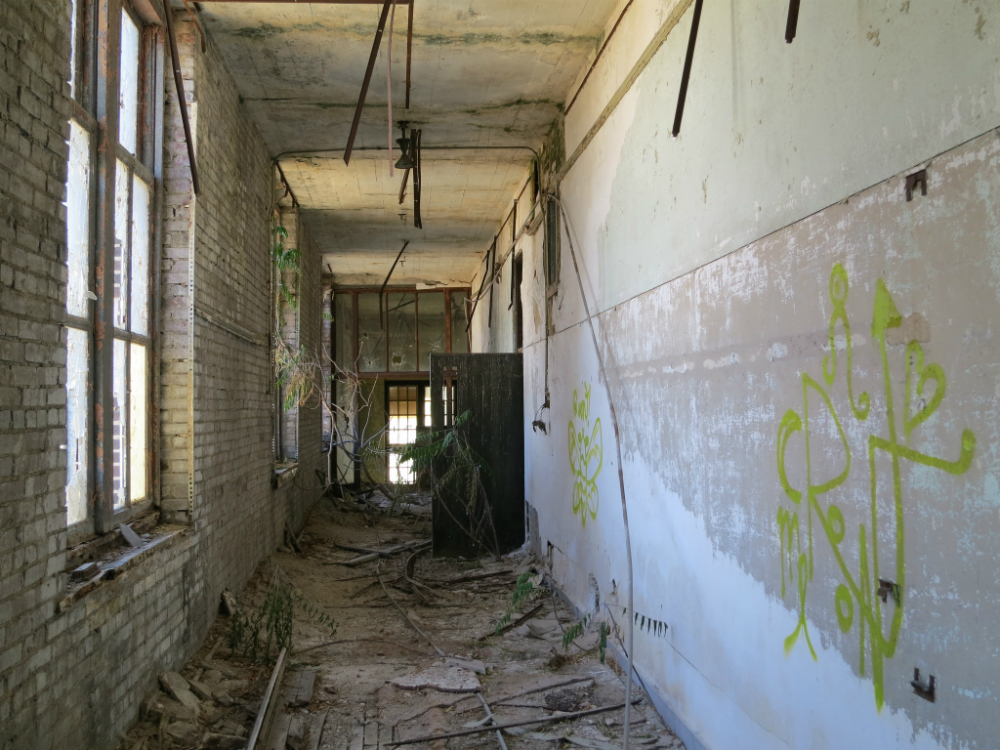 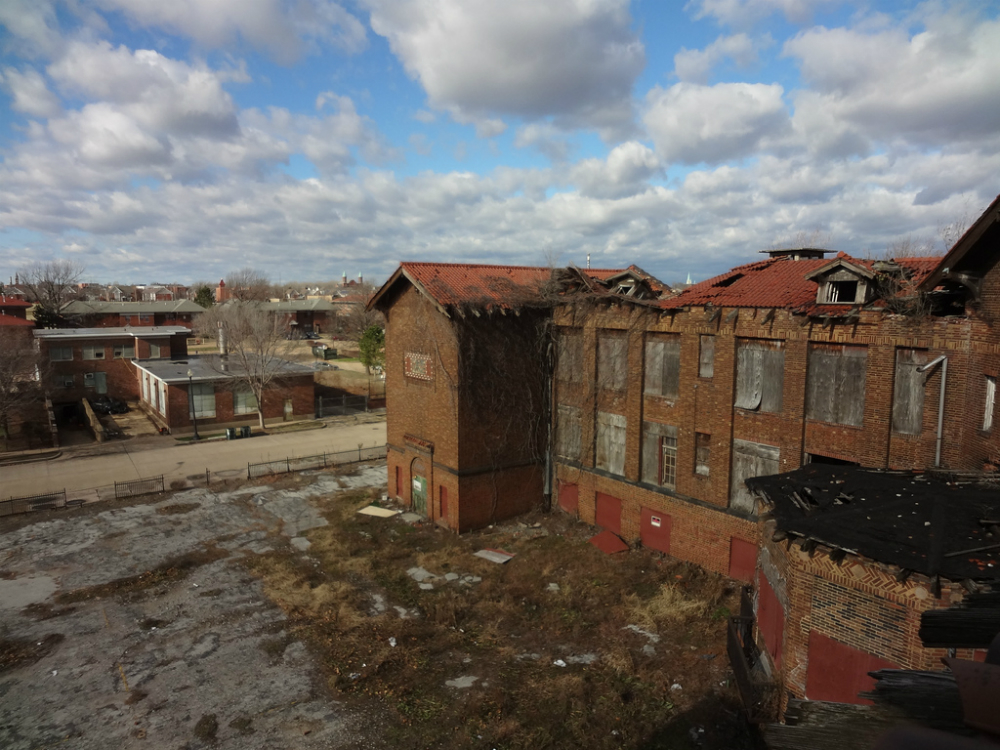