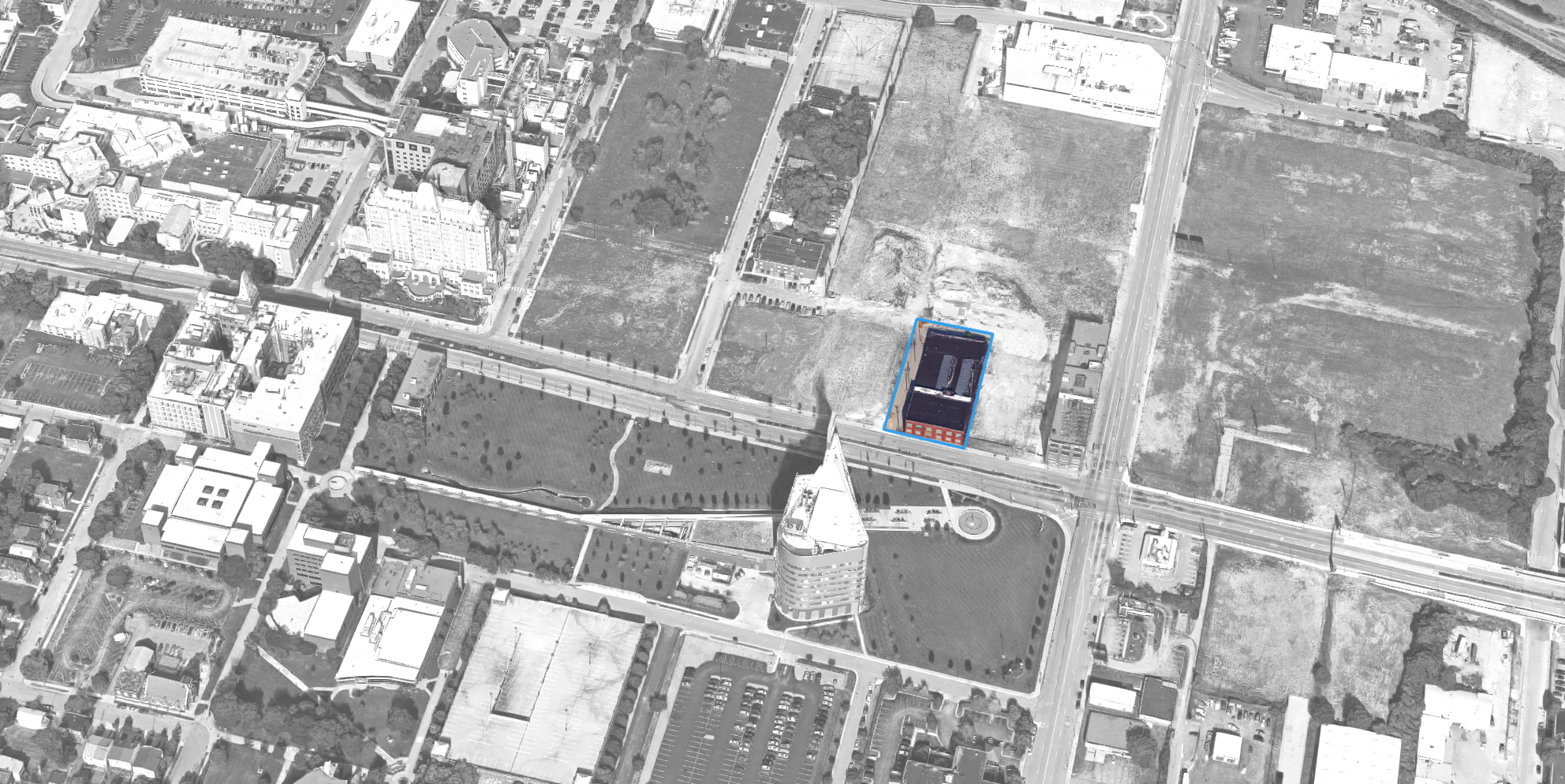 In November 2014, we reported that the owner of the Missouri Belting Building on Grand Avenue was seeking approval for demolition. At that time, the building was owned by Bill Rainen and MCOD Investments, LLC. The St. Louis City Preservation Board upheld the Cultural Resources Office Director’s denial of a demolition permit. The property is now owned by Saint Louis University. No sale price has been made available for the long expected purchase.

Voting unanimously to uphold the CRO denial, the Preservation Board found that while reuse of the building faced challenges such as being surrounded by SLU-owned property and vacated streets reducing access, there was no compelling reason for demolition. The owner did not present evidence of financial hardship and no record of attempts to sell or lease the property was presented. Additionally, no development plan existed for the site.

All of this is about to be moot. In 2012, when the city’s Planning Commission overruled the Preservation Board’s denial of SLU’s application to demolish the Pevely complex, the building’s fate was largely sealed. That decision left the corner Pevely building standing, but isolated. In denying demolition of the Belting Building, the Preservation Board did find that it and the remaining Pevely building provided context to one another. {the Missouri Belting and Pevely buildings on Grand Boulevard} However, deliberations in 2012 included significant consideration of a supposed redevelopment plan by the university. The school’s argument was that the Pevely site was needed for a new ambulatory care center. If SLU had been able to produce a plan and have a building permit approved, the buildings would have been gone. But the ambulatory care center proved to be fiction. And so one Pevely building, and the Missouri Belting Building still stand.

A lot has changed in four years. This past June we were first to report that SSM Health was planning a $500M investment following its acquisition of Saint Louis University Hospital from Tenet Healthcare. Just this month SSM announced it had selected The Lawrence Group in partnership with Hammel, Green and Abrahamson (HGA) as architects for a new $500M hospital and ambulatory care center. No site plans or designs have been released, but statement offered that the project would be built “in the immediate vicinity of the current hospital.” The new buildings are expected to be completed by fall 2020.

The Lawrence Group completed the transformation of a forgettable office building in downtown St. Louis to the new home of the Saint Louis University School of Law. This month the design and development company announced it had purchased the long vacant Federal Mogul industrial site near the Saint Louis University Frost Campus, with plans for a $100M redevelopment. The company is also remaking the Missouri Theatre Building in nearby Grand Center, with eyes on a larger development.

With a new owner and firm development commitment, and now ownership of a massive contiguous largely vacant parcel of land (virtually everything in the top image), we expect a renewed demolition request to made soon. This time is appears clear that demolition approval will be granted to make way for the SSM investment. More demolition along Hickory Street is likely as well.

In 2012, when asked if the university had received feedback from the neighborhood regarding its wish to demolish the Pevely complex, a representative of the school answer, “what neighborhood?” If the current project comes to pass, it will mark the final moment in the long process of a city neighborhood being extinguished. At least this time it appears something will replace it. Images of demolition on Rutger and Hickory Streets:

The view looking east on Chouteau Avenue toward the remaining Pevely building: