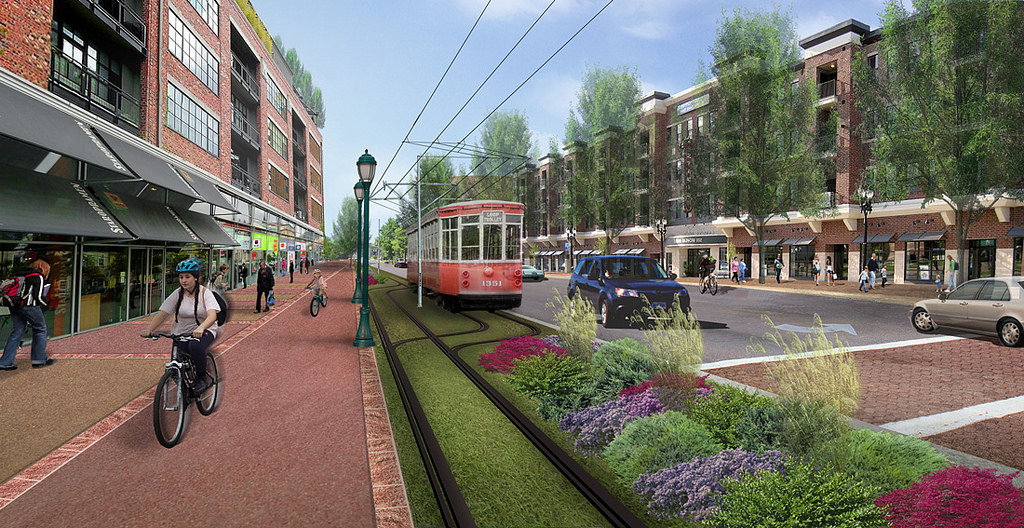 nextSTL has learned that bids to construct the long planned Loop Trolley have come in $11M above budget, threatening to permanently derail the project. The amount is more than 25% above the trolley’s $43M stated budget. Current plans call for the project to be re-bid without substantial reengineering.

In September it was reported that several bids had come in higher than expected. Those were characterized as “pretty standard”, and Joe Edwards, owner of several iconic Loop businesses and chairman of the Loop Trolley Transportation Development District, stated construction could be delayed a couple months.

Significant reengineering of the project would result in substantial delay, while it’s unclear if sizable savings could be found. This leaves the Loop Trolley seeking millions in additional funding, or shutting down. 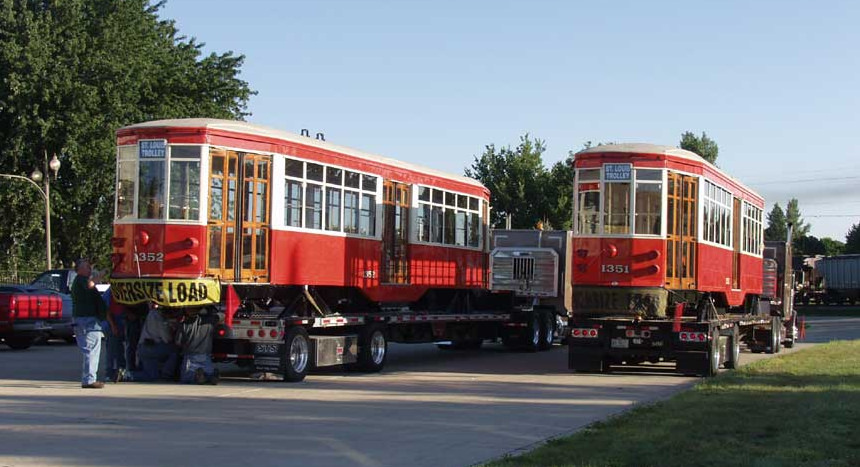 {reconditioned vintage trolley cars were delivered for display in 2005 – the two cars, displayed along the proposed trolley line are now in disrepair (image by Gomaco Trolley)} 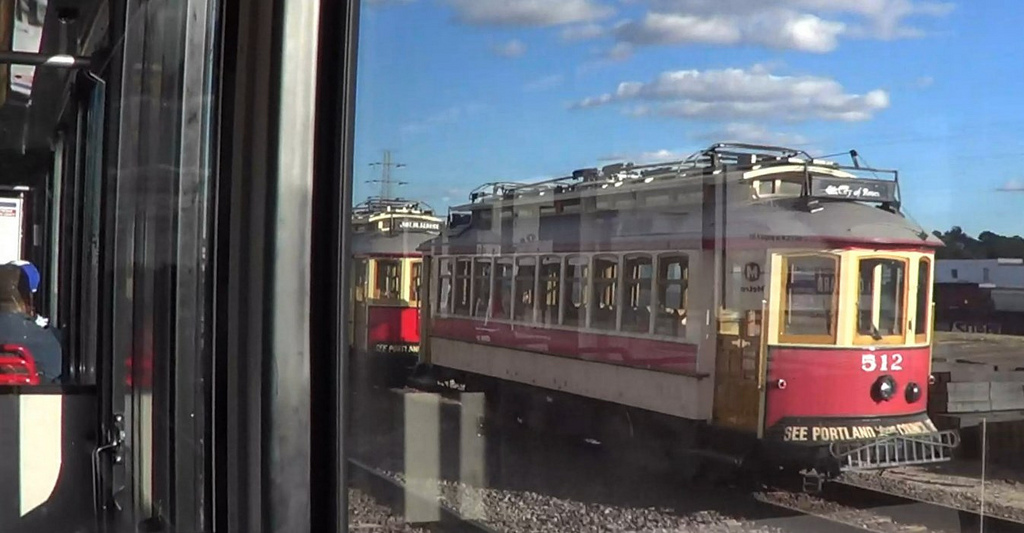 The project very nearly didn’t get this far. In spring 2013 we learned the Loop Trolley was in danger of losing its $22M federal grant. The Federal Transit Administration stated then that project had “repeatedly failed to make reasonable progress on key project milestones.” The FTA’s Regional Administrator wrote, “Absent a demonstration of local commitment to the project and progress toward meeting the terms of the grant agreement, (the) FTA will have to consider withdrawing financial support from the project.”

The $22M urban circulator grant was awarded to just six cities in 2010. A separate grant was made to the East-West Gateway Council of Governments to design the 2.2-mile line. Funding is also provided by a 1% sales tax from the Loop Trolley Transportation Development District, which was approved by Loop building and landowners (not Loop businesses, as originally written). Additional funding has been provided by The Great Rivers Greenway District.

In response to the FTA warning, The Loop Trolley announced Metro transit agency’s senior vice president of engineering and new systems development, Chris Poehler, would take a leave of absence from that agency to serve as the lead administrator for the Loop Trolley project. The move appeared to address what the FTA termed, “technical capacity and capability deficiencies”.

What had specifically concerned the FTA was a lack of engineering and design progress necessary to get the project to bid. The Loop Trolley project lacked the expertise to move it forward. With Poehler on board, the project was able to retain the federal grant, and successfully open bidding.

Back in 2011, the Loop Trolley seemed to be rolling along. The year before saw the awarding of the $22M grant. Tim Borchers, streetcar guru, was at the helm and thinking big when he sat down with nextSTL. He quietly left the project the following year. Banners announcing the Loop Trolley “Coming to The Loop 2013” were removed in October.

Then there was the federal lawsuit. The suit aimed to stop the project, claiming the line couldn’t legally cross Lindell Boulevard due to restrictions on commercial traffic, that University City and the City of St. Louis violated their respective charters when setting up the TDD, and that the planned route extended beyond court authorized boundaries. The lawsuit was dismissed by a federal judge in April.

Now that the administration of the project appears to be working, and the lawsuit is in the past, simple costs may doom the project. 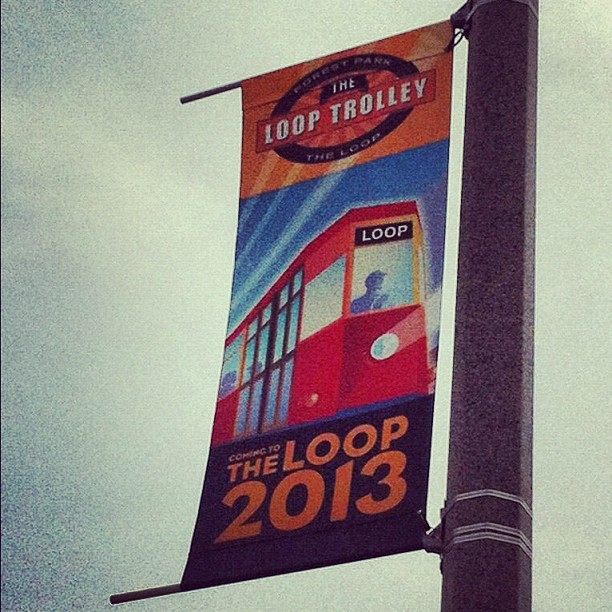 The line has been shortened at each end, simplifying each terminus. New, retro styled hybrid trolley cars gave way to refurbished cars, which have recently given way to leased vintage cars from Portland, OR. Those cars are now sitting near the MetroLink maintenance facility near downtown St. Louis. Each of these decisions may have improved the line as well as saved money, but there may not be much more to save.

Sources that had previously expressed optimism to nextSTL, are now saying that the end of the effort may be in sight. In some cases, project partners have moved on. The Loop Media Hub had long planned to piggyback on the Trolley construction to lay gigabit Internet fiber throughout The Loop. Last month, it announced that gigabit Wi-Fi will be installed and available to Loop businesses and free to the public in January 2015.

nextSTL has learned that other partners are beginning to plan for the financial fallout if the project is never built. Efforts are underway to explore whether the $22M federal grant could be reassigned to another project within the St. Louis region. Meanwhile, supporters of the Loop Trolley are hoping additional federal funds will be made available.

Jerry Blair, Director of Transportation for East-West Gateway, told the St. Louis Beacon in November 2013 that construction could start in spring 2014. At that time, as the project seemed to be on track, Blair identified the last big hurdle, “The only thing that would jeopardize the project would be if we put it out for bid and the bids came in much higher than the revenues we have to pay for it,” Blair said. “That would be the only remaining big risk in the project.”