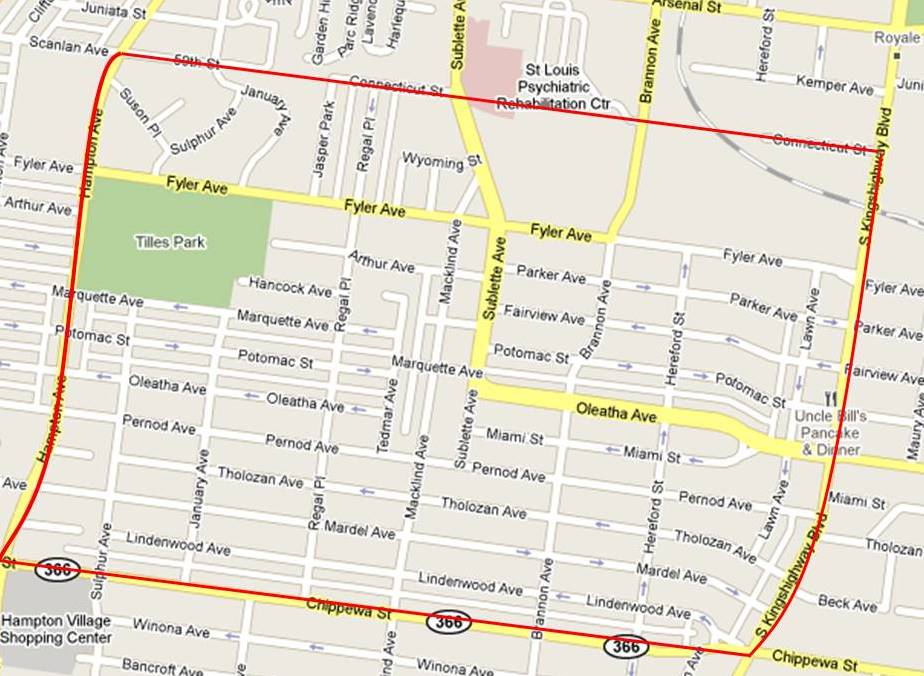 North Hampton is a south St. Louis neighborhood bound by Scanlan/59th Street/Connecticut to the north, Chippewa to the south, Kingshighway to the east and Hampton to the west.

Unlike its neighbor to the south, Southampton, or SoHa, North Hampton is spelled with two words. To the best of my knowledge, there is no effort underway to tag this as the NoHa neighborhood. When my wife first moved to St. Louis, she rented a place on Lindenwood. We always thought this was called Kingshighway Hills and apparently others did too per the sign below on Oleatha.

Obviously this is a highly desirable place to live in St. Louis.  And it’s because there is a beautiful mix of rental and single family homes, of all shapes and sizes. There are tons of businesses and services within walking distance. There is even a pedestrian cut through (one of my favorite urban amenities):

As you can see in the map, the neighborhood is mainly on the rectilinear grid south of Fyler. The northwest section of the hood has some winding, bendy roads and the northeast section, north of Fyler that consists of a large series of well manicured lawns and seemingly well maintained apartments called Hampton Gardens:

And east of Sublette there are some large cleared parcels mainly consisting of light industry and distribution facilities:

Tilles Park is a very nice park with sports fields, playgrounds, picnic areas, walking path, etc. It does not have internal access for cars, making it a nice quiet place to take a walk or have a picnic. But, this park could be much more, and I’d like to see a master plan in the near future. I wouldn’t call this park a regional draw, but it certainly serves it’s purpose as a sports field and recreation area.

This neighborhood had been connected to the street cars as early as 1890. Here’s a snippet on this history from the NH website:.

The Northampton neighborhood was served by two street car lines: the #50 Southampton line and the #21 Tower Grove line.

The Southampton line was established in 1889 and was considered an east-west route traveling between Third and Washington and Macklind and Devonshire. This line served Northampton along Kingshighway, stopping frequently between Connecticut and Chippewa.

In 1890 the Tower Grove line began operation with an east point of Fourth and Pine and a west point of Tamm and Columbia. The residents of Northampton were served by #21 along Arsenal between Hampton and Kingshighway.

The use of street cars as a means of public transportation in St. Louis died a slow death. The first line abandonment was #33 Vandeventer on July 22, 1929; and the last abandonment was #15 Hodiamont on May 21, 1966. The Southampton and Tower Grove lines were discontinued June 6, 1952, and November 2, 1940, respectively.

Street car service was at its peak in 1926, serving the population with 40 lines on approximately 450 miles of track.

The loss of our street car system is one of the worst things to happen to St. Louis in our long history. Can you imagine what an amazing city this would be if we still had these running? It would be a world-wide tourist destination. Either way, North Hampton is still one of the nicest neighborhoods in the entire city. It’s spic-n-span clean and it’s kind of like a Mayberry, U.S.A. compared to some of the other places in St. Louis.

There are many, many walkable businesses in NH from bars to restaurants to barbers/salons, independent and chain pharmacy, a coffee shop, yoga studio, veterinarian, auto mechanics, etc.

The vinyl mothership landed and stole the soul and the formerly kick ass metal and neon sign that once graced the front of this art deco beauty. Hey, at least it still stands and is a functioning business:

A 2016 renovation of the above building took place, complete with new windows and a handsome painting on the north wall by local artist Grace McHammond.

This is another well cared for, clean south side neighborhood filled with modest homes of all styles. From the little frame homes that are sprinkled throughout the neighborhood, and concentrated mainly near the west end of the neighborhood:

To the ginger breads St. Louis is known for:

To some of the coolest apartment complexes in the city:

To some of the nicest looking examples of 2 and 4 multi-families in the entire city:

And some cool mid century mod stuff too:

There are some nuggets here too. I stumbled upon Nathalia’s Hill Crest Abbey founded in 1897:

There are better photos here.

And the former Stone Center which I imagine sold St. Louis much of it’s stone and masonry that we are known for. This place is a real unique gem. Even the building is a sales pitch, as it’s made of the various stone combinations which are also advertised on columns and even on the sidewalk.

There are a couple cool metal and neon signs and other interesting sights:

And for those in the know, I bring you “the levels”:

Again, North Hampton is a self contained neighborhood, with plenty of viable retail, services and amenities within walking distance; but, there are still some properties that are available for more intra-neighborhood business:

And I’ll close with some brick patterns and general sight lines that caught my attention:

***In June, 2022 I revisited the neighborhood and the following includes updated commentary and photos.***

I missed a pic of St. Joan of Arc Catholic parish and school, one of the few remaining parochial schools in St. Louis.

I think I covered the rest fairly well, but maybe didn’t fully understand what a fascinating place this is since I’ve learned a lot more about the entire city. As the neighborhood aged and expanded north and west, you see the housing styles evolve from craftsman bungalows to art deco to mid-century brick ranches and bungalows to, post WWII sided homes.

The lots, streets, setbacks and property configurations evolved throughout these various eras. North Hampton could be a good case study in this evolution of housing in St. Louis all on one walk from Kingshighway west and north to Hampton. The area of the neighborhood around Sublette and Potomac really illustrates the evolution where you really start to see the post-WWII homes, wider lots and setbacks take hold.

The multi-family buildings and duplexes are beautiful and plentiful.

Investment in homes, garages and apartment upgrades is evident. The sided homes are seeing attractive updates with modern color schemes and necessary upkeep.

There is a real increase in landscaping around the single family homes. My opinion is the neighborhood looks great. I spoke to several people on the street and working in the alleys. Rents are going up. The opinions of the folks I talked to was it is following national trends coupled with the neighborhood improving. Some said window units are being replaced with modern HVAC systems, raising rents.

I could be wrong, but I believe bollards have been installed in the last decade on the pedestrian cut-throughs. I assume these are to prevent vehicular traffic (cars, golf carts, ATVs, etc.).

The street tree game has been greatly improved. It is noticeable all over the neighborhood, including Chippewa, which was a bit barren a decade ago.

Speed humps have been strategically installed on several streets within North Hampton to calm excessive speeding.

Tilles Park has seen some tremendous improvements over the last decade. I’ve spent much time here as we had a child who was playing basketball at the South City YMCA and we’d walk the park in between giving rides. From a prairie restoration which you can read about in the “Additional Reading” section below, to a new basketball court, to pickle ball courts to an operational spray fountain, updated playground and exercise equipment to functional, open bathrooms, etc. Congrats to all those working hard in Tilles, it looks wonderful and use seems to be at higher levels than previously observed.

The section of Kingshighway from Chippewa to about Tholozan or Mardel have drastically improved with lots of investment. There are a couple new businesses that are wonderful, including a tea place and a restaurant/bar.

There is a youth turnover that is quite noticeable. When we lived here in the 1990s, the population was a bit older and way more South City long time residents. It feels like a lot of younger people are on the sidewalks with strollers and kids.

Classical Junior Academy, an SLPS magnet school is still chugging away, and seems to continue to be a neighborhood staple.

There is not a lot of infill that I could see, as there are such few vacant lots. However, there does appear to be a few likely built in the last decade or so.

The George Sanger designed 1930 classic on Kingshighway looks fantastic with new windows and removal of the old awnings.

While the street tree landscape has drastically improved, there is need for more. There are a few areas that are pretty barren and even some streets with no sidewalks, especially toward Tilles Park which you would think many neighbors would walk to.

And of course, more walkable, intra-neighborhood businesses and places would be welcomed. This can be said of most neighborhoods in the online retail era. There are a few new businesses, yet sadly a couple great places are gone, like La Tropicana market, which we used to love. Silverleaf tavern is still there, but not many others on the inside of the neighborhood. I’d love to see more places for residents to walk to and help build that community and sense of place and ownership of this wonderful neighborhood. There are plenty of opportunities, while some street level former retail spaces are being converted to housing.

I’d also like to see the garden medians on Oleatha get some more uniform placement of additional trees and landscaping to complement the grassy areas. This is a pretty stretch of the neighborhood.

North Hampton has had a good decade by my purview.