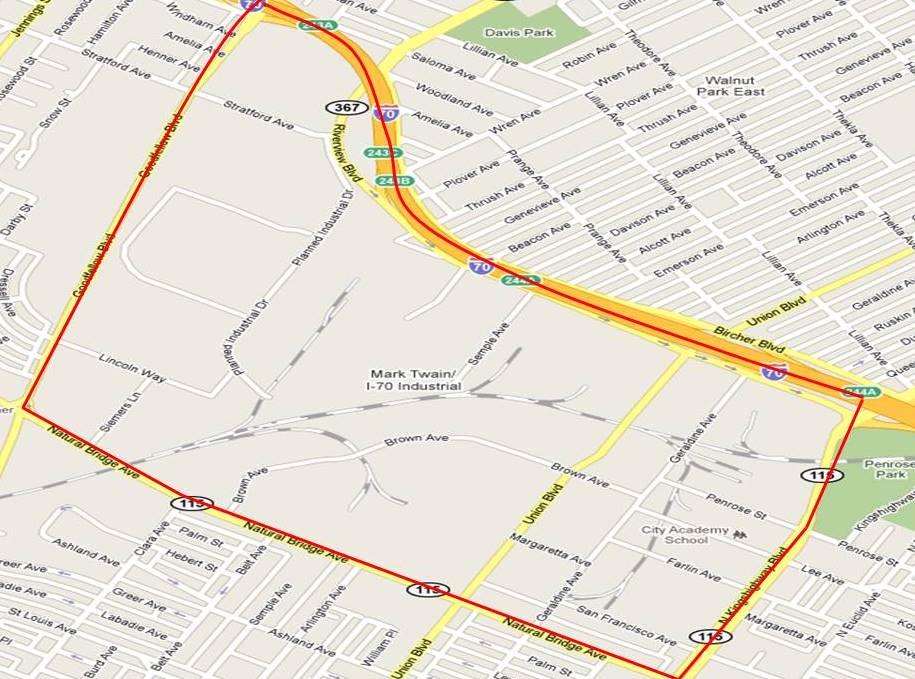 Mark Twain Industrial is the second most racially diverse north city neighborhood (ONSL counted 27% white people in 2000). But, this is definitely not a largely residential neighborhood, so the north side still stands as a largely uni-culture, uni-racial part of our city. Much of south St. Louis is very diverse in every way, north St. Louis is decidedly not. That’s just a fact in our city. One that hopefully will change and evolve to a place that people of all backgrounds and races choose to live.

A quick look at the map indicates there are huge parcels of land with very little road access. Most of the property is dedicated to business parks and factories/processing facilities, so getting photos is really tough. Obviously, I didn’t take any pictures of the several U.S. miltary properties, and many of the business parks are private with guard stations disallowing blokes like me with cameras access.

Other businesses I encountered were Smurfit-Stone Recycling and Pepsi. It’s good to see jobs and businesses in the city; but, many, if not most, of the former factories in Mark Twain Industrial are now abandoned; but many are very cool looking nonetheless:

Some factories have been converted to warehousing and distribution facilities:

The homes that do exist here are quite nice. The streets are clean and the properties are tidy, this would be a great place to live if you worked at one of the many employers in this neighborhood. The only detail that stuck out as unique were the frequency of under ground garages and entry ways that existed on many of the properties:

There are a few non-chain businesses, but not many and an impressive fire house:

There are some other suburban style campus settings including Mathews Dickey Boys and Girls Club, The City Academy, etc.

But, just like most neighborhoods in St. Louis, there are some subtle details that will catch your eye and may capture your curiosity:

***In December, 2021 I revisited the neighborhood and the following includes updated commentary and photos.***

This neighborhood is not mapped on Google, so I mapped it myself. Turns out, the housing is really on the western edge next to the suburb of Pine Lawn, MO. The closest western street is Dardenne Drive or Darby. You can use the typical tricks like pavement changes and dumpster/roll out carts to ID St. Louis vs. Pine Lawn.

Other than that, I pretty much got it. The former Corvette Plant is hard to photograph since it is on private property protected with guard shacks for entry.

The former Rexall Drug Company building on Kingshighway has some amazing decorative panels that I’ll go back with my telephoto lens to capture them.

The businesses have changed in some cases but the area is still in use as industrial and warehouse spaces.

There was a traffic circle and some traffic calming along Natural Bridge near the County border. It is a bit of a head scratcher as far as placement and execution, but at least they are trying.

The homes on the curving streets in the southwest corner are in need of maintenance and upkeep. They have not improved or become more stable over the last decade. The Census data shows this as the population continues to fade. It really is a cool little pocket of the city with the below-grade garages and curving streets. It could use some attention lest it fall even further.

I’d love to see a live-work project by the local employers like Pepsi and the others to rehab these and incentivize works to live near their jobs.

Here are some updated photos, nothing really new, but just a document to show how the neighborhood has changed over the last decade.

Former factories, brick yard warehousing and other light industrial still exists. There used to be iron works, a Corvette plant, paper companies and stove manufacturers. Some are shown below.

The homes are modest brick beauties along curvy streets.