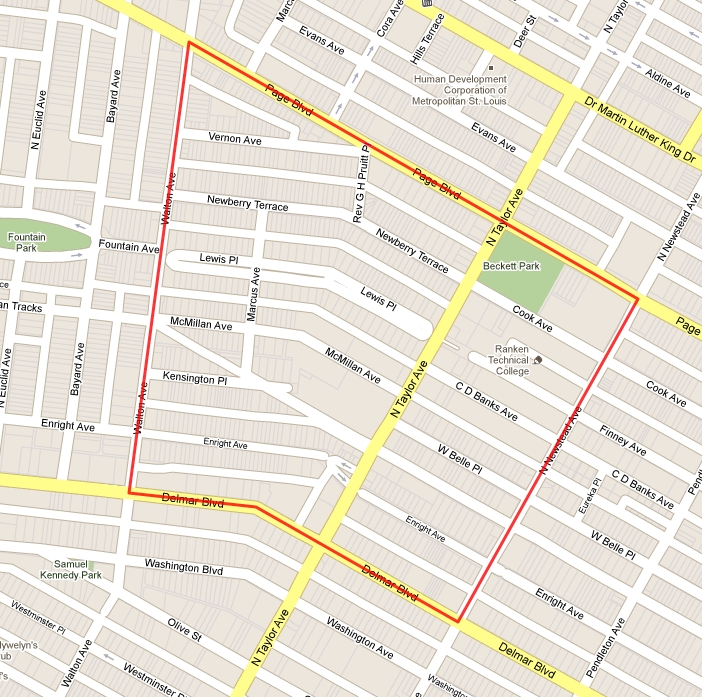 Lewis Place is a north St. Louis neighborhood bound by Dr. Martin Luther King Drive to the north, Delmar Boulevard to the south, Newstead Avenue to the east and Walton Avenue to the west.

The 2020 Census data showed another loss of 19% of its residents: 85% Black, 12% white (doubling of the white population over the previous count in 2010. Another 18% of housing units were lost, occupancy of the remaining units hovers around 69%.

A little history from the City of St. Louis website:

Lewis Place is the oldest African -American private street in St. Louis. Lewis Place was laid out in 1890 and was privately owned and developed by the family of William J. Lewis. The Lewis Place historic design recognizes the architectural significance of housing around the turn of the century. The architectural firm of Barnett and Haynes has been admired by historic preservationist throughout the country.

Lewis Place is a three block street with the center parkway which is lined on both sides with beautiful homes built between 1890 and 1928. The housing stock reflects the ambiance of housing along the beautiful Euclid-Central West End area. St. Louis has a rich history in the struggle of African-Americans for social and civil rights. Lewis Place played an important part in the struggle for fair housing.

Lewis Place like many other neighborhoods in St. Louis during the periods between 1910 to 1945 barred African-Americans from certain streets with the use of restrictive covenants. The covenants were agreements between White homeowners to exclude the sale of their homes to Black perspective buyers.

In the 1940’s, a group of determined African-Americans led by Attorney Robert Witherspoon, husband of the famed social activist Dr. Fredda Witherspoon, decided to fight the Lewis Place restrictive covenant. The persuaded fair-skinned Blacks who were able to pass for White, to purchase several homes in Lewis Place. once the purchases were completed, they then transferred the deeds to the actual of the properties, who voted down the restrictive covenant governing the sales of the housing in Lewis Place. This movement lead to the legal thrust that catapulted the St. Louis landmark case of Shelly Vs Kraemer into the supreme court. This landmark case struck down restrictive covenants across the entire United States of America., thus opening the doors to a new set of fair housing regulations on the federal, state, and local levels. Following the Shelly Vs. Kraemer case, African-Americans slowly began to gain the right to purchase homes in any neighborhood of their choice.

Lewis Place was placed on the National Register of Historic Landmarks on September 15, 1980. Lewis Place is situated in the midst of a revitalizing community with St. Louis University, Washington University and Ranken Technical College all within a three mile radius of the Lewis Place community. Lewis Place has pride, history, and beauty- it is a great place to live with many affordable opportunities.

I am inspired by the savvy fight of Robert Witherspoon. American history is full of struggles, and this is evidence of the epic struggles for freedom right here in our own backyard. Anyone that stands up and fights against social injustice is a hero in my book. Why Robert Witherspoon is not part of the local social studies or Black History Month curriculum is beyond me. My kids should be on a bus going to visit the gates of Lewis Place that marked the boundaries of where a black person could and could not buy a home. This is part of our history and we need to face it head on. I’m proud of what Witherspoon was able to accomplish, and proud that these residential restriction covenants were struck down right in our backyard.

Check out the Lewis Place Historical Preservation Inc. website. There’s an incredible effort underway to preserve the built environment and history of Lewis Place. Let’s take advantage of this story to teach the important lesson of struggles toward equality. And now that struggle needs to continue to preserve our historic back drops as Lewis Place has seen better days. Most recently, a number of properties in Lewis Place suffered extensive damage from the New Year’s Eve 2010 tornado. Michael Allen at the Preservation Research Office has written extensively about Lewis Place.

I love St. Louis’ history good and bad. Here’s a photo of Robert Witherspoon (bottom row, 2nd from the left)

I had some good conversations with some locals and they were keenly aware of who Robert Witherspoon was and knew of other dignitaries that used to live in Lewis Place. All parties were able to point me to R. Witherspoon’s home:

And the home of William Lewis:

And the home of the Williams brothers, who founded the St. Louis Argus, the oldest continuous black business in the city. And one of the oldest black newspapers in the country (founded in 1912):

It really makes me sad that this street is not taken care of and preserved for years to come. Seems like a noble cause for an organization such as 100 Black Men of Metropolitan St. Louis, another Lewis Place institution:

Here is the prominent gate that marks Lewis Place:

And the lesser gates on the west side of Lewis Place:

Overall, the housing stock is classic St. Louis stuff, but it’s seen better days. Here are some of the properties in pretty good shape:

But, there are plenty that are boarded up or falling down:

And of course contemporary infill:

Delmar doesn’t look it’s best through Lewis Place, there are quite a few large parcels that have been cleared and remain fallow fields; there are some cool homes remaining though:

Ranken Technical College, an essential institution in the area for nearly 100 years, has a big presence in Lewis Place:

Here are some of the many businesses, current and long passed in Lewis Place:

And a January 2011 photo from the Preservation Research Office:

One of my favorite metal and neon relics:

There are many churches in the neighborhood:

There are remnants of the old street car lines just below the surface of the wide alley that passes through Lewis Place:

We need to preserve places like this, they are part of our history and part of the civil rights story. Go check out Lewis Place, it’s just north of the Central West End and some very important and brave people lived here and changed things once and for all for generations to come.

***In October, 2021 I revisited the neighborhood and the following includes updated commentary and photos.***

I did not mention the presence of former synagogues. This part of St. Louis once had many Jewish residents. They are long gone, but some of their places of worship are still there, now in use by Christians.

The Catholics used to be rooted here as well, look no further than the Our Lady of the Visitation church and school. This 1909 Tudor Gothic gem is a beauty. The parish was hit hard by the white flight after WWII. It merged with Holy Ghost in 1961 and then St. Ann’s in 1992. It eventually closed and was sold to another church in 2017 for $250,000.

I’m fascinated with all the former churches and schools in these parts.

I guess another miss would be that I didn’t point out how the beautiful homes lining Lewis Place have quite a bit of variable styles, from the little bungalows to the larger, more ornate homes like you see in Visitation Park, West End, Academy, etc. My daughter had a school friend who lived on Lewis Place and I was blown away with the interior of that home. Absolutely gorgeous homes inside and out.

I’m going to break a rule I had for this blog: no deliberately posting photos of people. But in this case, the women I was chatting with insisted I include a picture of them as part of this post; one insisted I make sure and capture her house. I didn’t want to fall back on my promise, so here you go:

There is hope though, some homes on Page are getting the $ and TLC they deserve.

There are still some businesses open on the main corridors, but they are becoming fewer and fewer over the years. Others buildings are hanging in there for new uses.

Many of the rapidly declining and abandoned homes seen in the 2010 post are now gone. Lots of vacant land sits in their place.

There are still a lot of crumbling homes. Some are ripe for rehab, some likely headed to the landfill. It’s fair to say there are board ups on nearly every block…some sprinkled in, some the focal point.

There is much beauty here, though. It is so worth investing in and coming up with solutions after the 30+ years of intense residential decline.

The contemporary infill is mixed as far as quality, urban development. Meaning, some are higher density, attempting to match the feel of the original buildings.

Others are lower density, where you could see two more slender, tightly built houses existing with less side yard.

There are examples of home owners who have purchased adjacent lots to form massive properties.

There are signs of rehabs, but it is not overwhelming.

Stop the bleeding of residents and increase the number of livable housing units. A combination of ASAP rehabbing and new infill will be required. Luckily, I’ve read some things lately that make me hopeful for change.

I hold a lingering fear that here and many other places north of Del Mar will see infill over the next decades that will be decidedly suburban styled and lower density.

The best future for Lewis Place will take current and long-time residents seated at the table with the institutional investors in the area, like Ranken and Great Rivers Greenway listening to the neighbors and hopefully urban planners who can hold standards to the highest. Lewis Place was built for pride and greatness, it should be rebuilt for the same.

From what I’ve read that is exactly what is happening and being discussed. Hope springs eternal.

Here’s a great article by Jack Grone in St. Louis Magazine which is the cause for my optimism for the next ten to twenty years:

“There’s a synergy, and this is not by accident,” said Pamela McLucas, vice president of Park Place Housing and Economic Development, a nonprofit community development corporation formed two years ago to give residents of Fountain Park and Lewis Place a clear voice in how their neighborhoods are changing.

“I’ve been saying for the last 10 years: North St. Louis is going to be the last of the last, but they’re not going to have a choice but to develop it,” said McLucas, who lives in the same home on Lewis Place her parents bought in 1985, shortly after she finished high school.

And here’s a link to Park Place Housing and Economic Development if you’d like to learn more.

The Hodiamont Tracks Great Rivers Greenway project will be a major boost for the neighborhood residents and the larger city as well. It is a known area for dumping. Here’s how stretch of it look as of publishing.