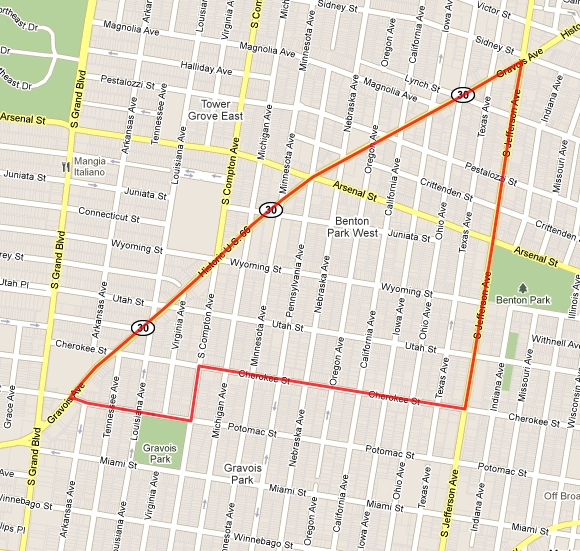 BPW is a rare neighborhood without a park within its official boundaries, but it abuts both Gravois Park and Benton Park. A brief history from the website:

By the mid-1860s, the St. Louis neighborhood of Benton Park West was already a community that could provide for the basic needs of its residents. There were carpenters, builders, stone masons, dairymen, gardeners, market owners, grocers, saddle and harness makers, a blacksmith, a midwife, and two saloons to serve the area of about 50 city blocks.

Benton Park West was considered a working-class neighborhood and a German community. While most of the residents were working class, many owned their own businesses. There were also come very prominent residents. Many of the beautiful homes the working class immigrants built remain in their architectural grandeur today.

The are 2 main things that make me think BPW falls into the “up and coming” category. One is the continuing retail and business development along Cherokee and Jefferson, the other is the grass roots rehab efforts and artist community that has taken root here. The 35% ownership rate recorded in 2000 will probably go up; hopefully so will the residential numbers. I don’t know what the perfect mix is between owner/renter, but it feels like it should be much higher than 35%, maybe 60-75%.

Cherokee is clearly one of the coolest streets in this town. From the Casa Loma Ballroom to art galleries, bakeries, bookstores, coffee shops, clothing/accessories, bars, taquerias, independent grocery store…this place has a great feel.

This place reminds me of Tulum, Mexico:

Foam at the corner of Jefferson and Cherokee is one of my favorite coffee shops in town, there is always good music playing in the background and the offerings are quite delicious:

I have always wished this was a taqueria. It could have a walk up counter and outdoor seating. It would signify the area as the Hispanic part of town to folks driving along Gravois. It could be the western doorstep to the delicious and amazingly cool latin stuff heading east all the way to Jefferson.

The homes stand true to the “working class” description noted in the website quote above. This should be marketed as a strength. Proud, nice smaller homes to attract young people, singles, couples and those that don’t have big families.

If you’ve been following these guides, you know I’m a big fan of fire escapes. These two are unique in that they are on the front of the homes facing the street. The second one even blocks most of a window…very unique:

I’m also developing a fondness for these metal awnings with letters on them:

Some other local flavor:

As with many neighborhoods, Gateway Greening has been working with local groups to bring community gardens to the city. BPW is no exception. If it were up to me, these would be in every neighborhood within the city!

There are some really cool studios and businesses to be found in BPW not on Cherokee:

Vitrolite is one of my favorite building materials:

BPW is still a little rough and dirty. Not in a hopeless way, it’s just a little more gritty than its neighbors including TGE, Fox Park, Marine Villa and McKinley Heights. It’s certainly not a scary place, it’s an exciting place teeming with life. It’s got a big city feel (non-Manhattan NYC comes to mind) in that it is racially and economically diverse. This is one of the only places in town that I’ve heard Spanish music blasting from speakers. I love Hispanic/Latino culture, food, etc. So if you’re like me, BPW is a place to check out and explore. There are many grocery stores, taquerias, plate restaurants, and more to check out. The annual Cinco De Mayo festival is a blast.

***In April, 2021 I revisited the neighborhood and the following includes updated commentary and photos.***

I maybe undersold this place. I absolutely love it here. The architecture and variations in size of the homes make a beautiful neighborhood. I’ve included updated photos with some of my favorites near the end.

Not necessarily a “miss”, but the thing that struck me today is the vacant housing in the neighborhood is largely mothballed and in great condition waiting for the $ and people to bring them back to life. Seems like nearly every corner has a storefront waiting for a bar or other small business.

I missed some fairly significant properties that are worth mentioning. The former Pomegranate Temple being one. This 1927 beauty was used by the Freemasons for nearly 50 years until it was sold to Last Days Apostilic Church.

Another beauty is the former Garfield School at South Jefferson and Wyoming Street. This 1936 George Sanger designed classic was closed by SLPS in 2003 due to declining enrollment. Peter and Paul Community Services converted the building into housing for the chronically homeless back in 2012.

There is an excellent blog on this property at the BPW website.

And, I didn’t show the variation in churches in the original post.

Construction dumpsters are everywhere, indicating a significant amount of investment in these parts. While there are still board-ups and crumbling buildings, they are lying in wait for more people and more investment. But, the momentum that makes people optimistic appears to be here. I expect to see this neighborhood gaining population with property values rising in the next decade.

The following will show the spectrum of in-need of rehab, to under rehab, to recently rehabbed, to even some new construction from the local CDC.

There are signs of urban farming and personal gardening popping up all over. A healthy, sensible, optimistic thing to see in any up and coming neighborhood.

Cherokee Street continues to ebb and flow and remains a great place to hang out and shop. There is still a bit of vacancy, but that can change once we crawl out of the COVID-19 pandemic. The strip looks great.

The public art that adorns many of the buildings adds color and interest.

There is evidence of potential infill on some long vacant lots. DeSales Community Development, a local CDC, is doing a lot of good work in BPW. They have plans to build 40 affordable units for 55+ folks at the corner of Arsenal and South Jefferson.

The neighborhood has a strong history of offering affordable housing, helping the former homeless and providing homes for seniors.

The Salvation Army – Booth Manor currently serves seniors in the neighborhood. One curious item from the Salvation Army website is that nearly a third of the Booth Manor residents are Russian speaking. I must be doing it all wrong, I’ve rarely heard people in St. Louis speaking Russian.

I’d love to see the population increase and start filling some of the corner mixed use buildings. This neighborhood is a prime example fo the old days when the house to church to school to bar to job closed loop routine was in full effect. The bones are there on these former corner stores. Some have been converted to residential, but not all. They are not just on every corner of Cherokee from Jefferson to Gravois, they are within the neighborhood. This right here is potential for the 15 minute neighborhood and a really, really cool place if these were opened again.

I like seeing the Calle Cherokee signage and recognition of one of the only concentrated areas of Hispanic/Latino businesses and residential areas in all of St. Louis. I’d like to see continued support for this community so it can grow to become more like our peer cities with a much larger Hispanic/Latino population.

I still think a major quality of life enhancement for this part of St. Louis would be to enforce traffic laws on Gravois and Jefferson and prioritize a road diet for South Jefferson. Several sections of S. Jefferson in BPW have beautiful brick mixed-use buildings with wide sidewalks that could be quite attractive outdoor spaces…if the speeding traffic was calmed.

Gravois has some handsome buildings in BPW.

Some updated photos of BPW: