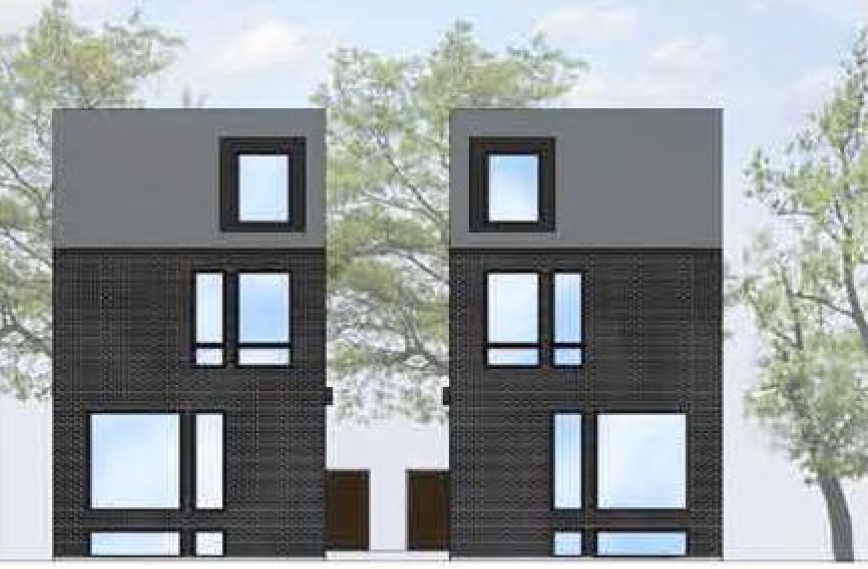 The Preservation Board agenda for their August 23rd meeting has four infill developments for consideration. Infill is a boost to the solvency of a city because the land is rendered more productive while no new public infrastructure, like streets, lights, pipes, etc, have to be built to serve it. Let’s have a look.

First are two homes at 2270 and 2272 Shenandoah Avenue at the corner of Indiana Ave in the McKinley Heights neighborhood. The developer is City Life Development, LLC/Nick Shapiro with architect U.I.C./Sarah Gibson.

STAFF RECOMMENDATION:
That the Preservation Board grant preliminary approval to the project with the condition that the front façade design be revised to display less unbroken wall surface and siding; that final drawings, exterior materials and colors be reviewed and approved by the Cultural Resources Office.

There’s a optional accessory dwelling unit (ADU) above the garage. That would be a density win!

STAFF RECOMMENDATION:
That the Preservation Board grant preliminary approval of the new building with the stipulation that final plans and materials are reviewed and approved by the Cultural Resources Office.

The reason the lot is oddly shaped is due to Interstate 44. Most of the 3200 block of Copelin Avenue, along with many others, was razed for the government-led effort to spread out the region. It’s a sign of the strength of the real estate market in the area that this house is being sought despite the blighting effect of the highway. That patio might be noisy!

Next is a new 1,742 square-foot home at 4112 Castleman Avenue in the Shaw neighborhood. The developer is Adam Roberts/Triple H Real Estate, LLC with architect John Wimmer/JD&A Architecture.

RECOMMENDATION:
That the Preservation Board grant preliminary approval of the new building with the stipulation that final plans and materials are reviewed and approved by the Cultural Resources Office.

Last is a three-family apartment building at 5955 McPherson Avenue at Des Peres in the Skinker DeBaliviere neighborhood. The developer is Builder, LLC-Brent Cowin. The owner plans to live in one of the units. The River Des Peres running beneath Des Peres Avenue may be an issue for construction.

RECOMMENDATION:
That the Preservation Board overturn the denial of the building, as it mostly complies with the Skinker-DeBaliviere Historic District standards, with the condition that a decorative cornice is added, the brick extend to the break in the parapet wall on the east façade, the percentage of glazing is increased on the street facing facades ;and that final plans, details and exterior materials be reviewed and approved by the Cultural Resources Office.