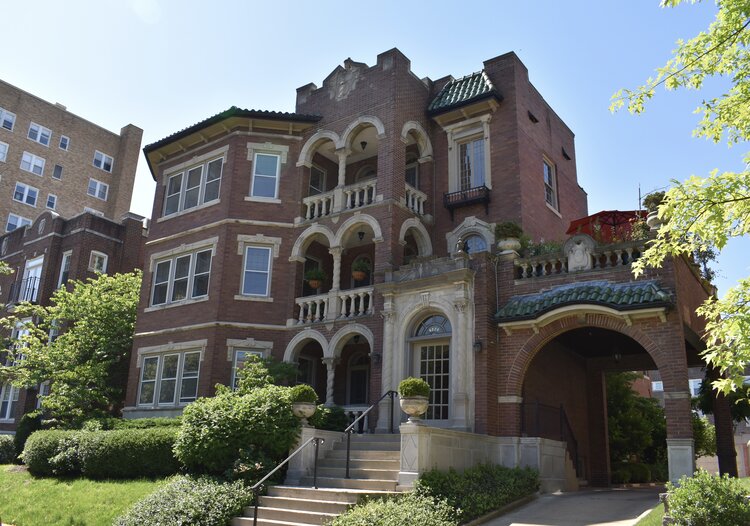 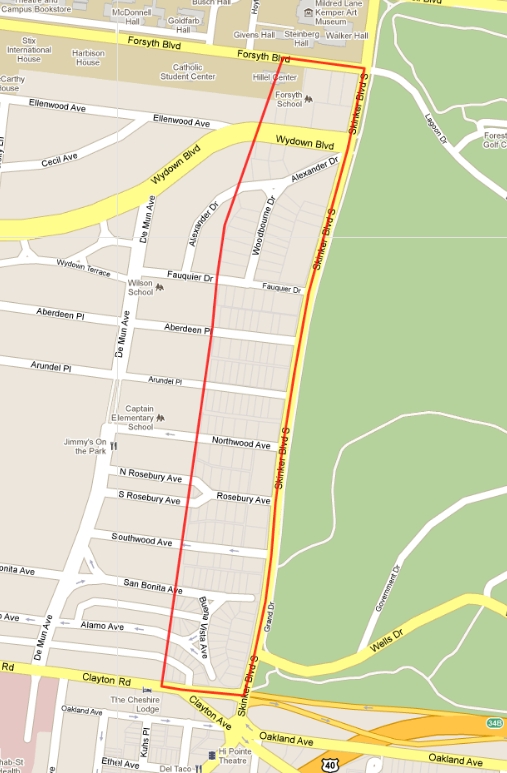 Wydown/Skinker is a south St. Louis neighborhood bound by Forsyth to the north, Clayton to the south, the city limits to the west and Skinker to the east. These city limit boundaries are somewhat elusive, I have heard that St. Louis extends ~600 feet west of Skinker Blvd. And as I learned in my tour of Ellendale, the city/county streets are paved with different materials, so the actual border may be traced by keeping a close eye to the pavement. I’ve estimated the approximate boundaries in the following map:

The Wydown Skinker neighborhood is one of the most beautiful neighborhoods in the city. Large homes, many built in the 1920’s, grace tree lined private streets. Large houses on Skinker Boulevard are directly across the street from Forest Park and all of its amenities. Washington University is right next door, as is Clayton, Missouri, one of St. Louis’ finest suburbs and the seat of the St. Louis County Government. Skinker also houses several high rise apartment and condominium buildings, and smaller apartment buildings are located on several side streets. The neighborhood features many shops, restaurants, and other businesses, as well as schools, churches, and medical facilities.

Actually, I think all the shops, restaurants and other businesses are in Clayton. Probably everyone in St. Louis and St. Louis County are familiar with Wydown Skinker as it is the westernmost part of St. Louis that borders the beautiful Forest Park along Skinker.

It is also home to the Missouri History Museum Library and Research Center (open to the public):

And certainly you’ve seen the giant Amoco sign on Clayton and Skinker right next to the Hi-Pointe theater (which isn’t in Wydown Skinker, but the Hi-Pointe neighborhood):

Amoco is now named simply BP after merging with British Petroleum, but they kept the old Amoco sign. Here’s some more info from Wikipedia:

Although a few Amoco stations still use their former logo, most have since been converted to the BP livery. In St. Louis, Missouri, near the highest point of the city, the largest Amoco sign in the world, both before and after the company’s demise, still stands. It stands at the intersection of Clayton Road, Skinker Boulevard, McCausland Avenue, and Interstate 64/U.S. Highway 40. It is visible up to 2 miles away on the interstate. Most surviving BP stations are kept so BP can continue holding the trademarks for Amoco and Standard.

Another landmark the Cheshire Inn, recently given new exposure in the Oscar nominated film Up In The Air, is partially in Wydown Skinker. The Cheshire Inn restaurant and bar are in the city, the hotel is in Richmond Heights, MO an inner ring suburb of St. Louis. I believe the movie was actually shot in the restaurant which is in St. Louis, not Richmond Heights. Lodging Hospitality Management (LHM) has recently purchased the complex and is planning for four restaurant venues and other renovations. It has been suggested at the eastern most portion of the complex could be razed for new development and rumor has it that St. Louis staples, such as Tony’s downtown may consider a move. Plans have not yet been made public.

I’m not the guy that’s gonna talk up the 88 cities in St. Louis County, I’ll leave that to the next guy to talk up all the cool places in the St. Louis suburbs (and there are many). But, man, I’ve gotta mention some choice snippets from the descriptions of the various “fantasy rooms” off of the Cheshire Inn website (no word if LHM will keep the “fantasy rooms”!):

Honey, I hope I’m not showing my hand just too much, but I know exactly where we’re going for our next anniversary 🙂 I am not being a smart aleck, I approve on all levels of the kitsch and otherwise.

The neighborhood of Clayton, MO that borders Wydown Skinker is called Ellenwood, and as I mentioned above the city/county dividing line is not as clear as other neighborhoods.

In some areas the pavement does tell you when you are in St. Louis or Clayton:

In other areas, Clayton distinctly marks its territory:

On other streets such as Aberdeen, Arundel and Northwood, it’s not as clear. I spoke to 4 different residents of WS to get their take on the city/county divide. The first person told me the streets aren’t as clear an indicator and that I should look for the city dumpsters/roll carts in the alleys. Great advice.

The second person I spoke to gave me a priceless story to tell. She was doing some yard work in her front yard and I stopped on my scooter to ask her take on the city/county dividing line. I motioned with my hands to indicate I was talking about the streets and properties, and I posed my question: “excuse me ma’am, can you tell me the difference between St. Louis and Clayton?”, without pause, she looked me in the eyes and said “attitude”. Hell yes!

I laughed a jolly laugh, and wanted to give her a hug for preaching to the choir! I knew I didn’t phrase my question properly, but her immediate, honest and unfiltered response was great. I pointed to the “CITY” sticker on my scooter and said “I’m a city guy, so you just made my day, and I know exactly what you’re talking about”. You can pretend all you want that we don’t have real divides in this town, but racism and regionalism are our 2 biggest problems on both sides of the argument. I mean, even among the privileged, there is still tension/snobbery and disagreement between county and city dwellers.

Then I asked a homeowner on another street and he pointed me to the concrete marker in the grass which he thought was the city/county marker:

But then he pointed me to his neighbor right down the road who is the president for the Ellenwood neighborhood of Clayton, MO. He was a total gentlemen and said, “follow me, I’ve got a map.” He went to his home and brought out a laminated copy of an original map from April 11, 1923 from the designer of the neighborhood. He pointed out to me that it’s not a clear or even straight dividing line. One thing is for sure, you can’t discern by the styles of the homes whether you are in Clayton or St. Louis when in the Wydown Skinker neighborhood.

So I’ve done my best to show you only the properties and places within Wydown Skinker and not Clayton, MO. I’ll leave documenting the 91 suburban cities of St. Louis County to the next guy, my task is to talk up St. Louis.

Here are some of the low rise apartments:

Not too bad, eh? But my favorite draw to Wydown Skinker are the high rises that overlook the park:

There are many other interesting sites and institutions within W/S including the Vedanta Society:

The homes of Wydown Skinker are certainly exclusive and beautiful:

Although the photo quality is poor, check out the pitch on this roof toward the right:

Historic homes and high rises not your thing? There’s one last chance to build new in Skinker/Wydown facing the park. Dwell Studio Architects have drawn up a proposal for a 3,000 sq. ft., 3-story, 5BR, 3.5BA, $850,000 home for a narrow lot near Clayton Road that might fit the bill:

Make no mistake, this is an exclusive neighborhood. But, the cool thing about St. Louis is that these large homes built with such pride and craftsmanship are attainable by the hoi polloi. You don’t have to be a bazillionaire to own a home like these. There are plenty of homes very similar in style, stature and size in Visitation Park, Academy, West End, etc. that are rehab ready to become showplaces and swanky neighborhoods just like Wydown/Skinker.

There is no official city park in Wydown Skinker, but of course Forest Park is right across Skinker.

The Amoco sign was recently repainted with their newer logo now that they have revived the brand.

The “fantasy rooms” at the Cheshire Inn are no more.

The neighborhood has nice diversity though, 14% of residents were born outside the U.S. and only 37% were born in Missouri, meaning there are lots of people from other places settling down here.

Traffic calming on Skinker and Clayton Road, better and more frequent pedestrian crossings into the park…that’s all I can come up with. The neighborhood is built out and pretty much at full capacity.

Just a few more photos, not really misses, just some updates to keep it interesting.

I will leave you with one of my favorites: