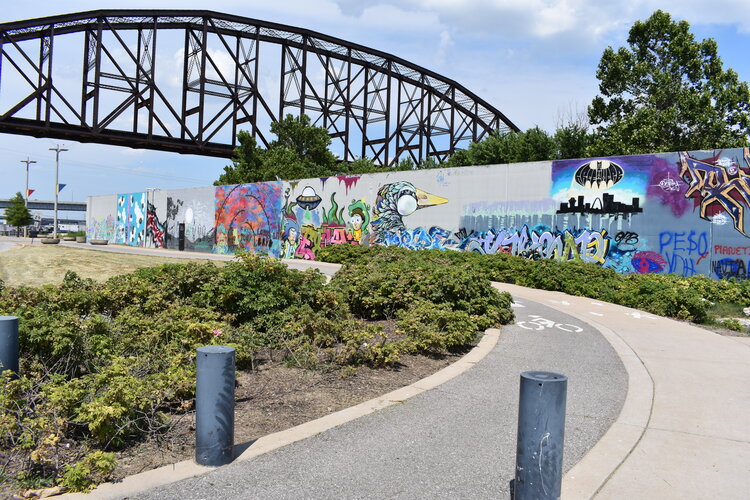 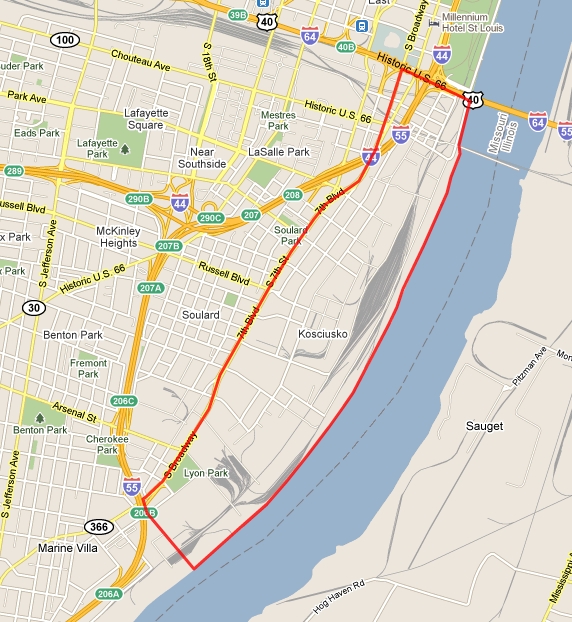 Kosciusko is bound by I-55 on the north, Cherokee on the south, 7th and 8th on the west and the Mississippi River to the east. There is no 2000 census data reported on the city site, so I have nothing to report in the ways of demographics or housing units available. Why is this? Largely because it’s been cleared for rail roads, ABI, former industry (Nooter Corporation), now service, distribution and wholesale operations. It’s also home to a major facility for the National Geospatial-Intelligence Agency.

Anyhow, Kosciusko is one of the easternmost neighborhoods in south St. Louis. Many of it is easily recognized from Broadway near the brewery, Soulard, LaSalle and the I-55/I-44 convergence right before the Poplar Street bridge exit to Illinois. Sauget, Illinois is right across the river from Kosciusko.

Joe Holleman recently did a piece in the St. Louis Post Dispatch about correct and local pronunciation of various streets and places in the city. He mentioned Kosciuszko (notice the “z” that doesn’t exist in the city spelling). Anyhow, it’s a Polish word and the formal pronunciation is kuh-SHOO-sco whereas the locals say kozz-ee-OSS-co.

Lyon Park has a couple baseball/softball fields in the shadow of the brewery and sits right next to the NGIA facility.

Kosciusko is almost completely an industrial area. But it wasn’t always that way. The area was once one of the more dense residential neighborhoods in the city, an extension of Soulard toward the river:

With the exception of the retail businesses that operate along Broadway and 3rd street, it’s really hard to get photos of this neighborhood. I first got stopped by the NGIA security. I played the “I’m on public property card” even though (admittedly) it was a weak hand, and I was basically asked to get lost in the most polite manner possible. But, the security guard then notified Anheuser Busch InBev security of my presence who proceeded to stop/question me near the flood gates. They indicated that the road I was on was private rail road property, and I should stay on the public roads.

This warning meant I was pretty much blocked from getting more pictures of the graffiti on the flood walls. The security guards were actually nice though, and I realize they are just doing their jobs. They were very interested in what I was doing. I mentioned that I had heard there were several residential properties still existing, and they mentioned one was recently torn down. We went our separate ways, and they once again stopped me in another section of the neighborhood. This time, to fill me in on the presence of a couple people that run a catering business and live here:

They also recommended this bar, I think it’s call Al’s that has a really good breakfast:

I had a heck of a time finding these still-standing residential properties. Maybe these are a few, not completely sure:

There are signs of people living here though and I know there are some Kosciusko-ians lurking about in strange places:

Frankly, most of the buildings are modern warehouse sheds and surface parking for trucks and not worth photographing. But, the Chouteau’s Landing area on the north side of Kosciusko is pretty cool. Because of its location, this area’s been the focus of big development ideas. Those ideas aren’t dead, but they haven’t gone anywhere either. The current Arch grounds revitalization may improve access, but some of the early plans for a beer garden, ice rink, parking and and urban sports park next to Chouteau’s Landing at the far south end of the grounds have been scraped. The area may also one day be the eastern terminus for the ambitious Chouteau’s Greenway, linking Forest Park with the river.

The early plan for connecting the Arch grounds with Chouteau’s Landing is sadly no longer on the table:

Chouteau’s Landing as it appears today:

This building is how most people know Chouteau’s Landing and the north end of the Kosciusko neighborhood as it’s easy to see from the Poplar Street Bridge and I-64:

There are many, many paint wholesalers and retailers in this neighborhood. Porter, Sherman Williams and many others can be found. This could be the “paint district” of St. Louis.

Coincidentally, the entire stretch of the Mississippi River flood gates are spray painted with some of the most elaborate graffiti I’ve seen.

If you’re into railroad operations, trestles and bridges, this is one of the best spots in town to check out; many of the roads are shared with train tracks:

The double-deck MacArthur Bridge is a hoped-for bike and pedestrian path across the Mississippi as the top deck is no longer in service. Unfortunately, there seems to be very little chance of that happening. Trestles and bridges near the river:

I wish I had a photo of the old Nooter Boilermaker neon sign that graced Kosciusko years ago. If anyone has a photo, please forward to me, I’d be most appreciative. There are other industrial signs in this neck of the woods:

Kosciusko is home to Lift for Life Academy, the first charter school in St. Louis. It’s housed in a pretty sweet building that resembles a bank:

It’s also home to St. Mary of Victories, the first Hungarian Catholic church west of the Mississippi and the second oldest (1843) Catholic church in the city (the old cathedral DT is older). It was designated as a National Historic Landmark in 1980:

There are some really cool businesses and signs along Broadway (remember Hullaballoo?). My favorite guitar/string shop in town J. Gravity and others:

Globe Drugs is always a fun visit, it’s kind of like a lo-fi Walgreens if you haven’t been:

Old, meet new, satisfying souls for a couple thousand years and since 1971:

The greatest potential of this neighborhood is clearly the Chouteau’s Landing development of Powell Square and the other warehouses/factories near the river just south of Downtown. This could be a great link from DT to LaSalle and Soulard.

The 2010 Census data included information for Kosciusko, whereas the 2000 city website did not. There are only 15 housing units in the entire neighborhood, 4 of which are occupied. 14 people were counted, half black, half white.

I missed this awesome sign. I did a separate post on this Jewish Czech immigrant bakery as a result of this find.

I missed the history and importance of the arsenal.

“The National Geospatial-Intelligence Agency is proud to have been part of St. Louis for seven decades. The agency’s deep roots in St. Louis dates back to 1827, when the St. Louis Arsenal, where NGA currently resides, began manufacturing and supplying small arms to the U.S. Army and American settlers as the U.S. expanded its western frontier. The Arsenal next played a key role in the Civil War, storing supplies, outfitting troops and repairing arms. After the Civil War, the Army found many uses for the Arsenal, including as a cavalry depot, a clothing depot and a general depot for the Quartermaster Department.

By 1952, the Louis Arsenal, no longer needed by the Army after World War II, was determined to be a more suitable location for the Air Force Aeronautical Chart Plant mission. That August, the organization became the Aeronautical Chart and Information Center and established its headquarters in the Arsenal.

That’s where the ACIC created a complete mapping of the moon for the Apollo astronauts. They created more than 300 products in support of five Apollo flights in 1969 alone. NASA used these lunar maps to determine the safest landing sites and the best places to perform experiments.

The ACIC was then folded into the Defense Mapping Agency in 1972. DMA ushered in a new era of precision weaponry by producing – in St. Louis – Terrain Contour Matching maps with previously unattainable accuracy during Desert Storm. While modern precision weapons use more advanced systems like GPS or inertial guidance systems, TERCOM maps, also uploaded into the navigation systems, functioned as a fail-safe when other signals may be obscured. This is a great example of how innovations in technology directly enable NGA’s support to the warfighter mission.

There is a now a small skateboard park.

Much of the older buildings on the north side of the neighborhood have been lost to arson and the elements.

The graffiti wall is a constantly evolving expression of the current times.

The bar I mentioned is now for sale.

The north end of the graffiti wall had some investment with a trailhead, landscape and water fountains for cyclists/walkers heading to the Arch grounds and the Riverfront Trail.

Since the 2010 post, a fantastic history of the neighborhood by Chris Naffziger was published in St. Louis Magazine back in October, 2019. This is a must read, with plenty of photos and context to once again show the damages our city has endured due to the “corporate campus”, trucking operations and most of all: urban clearance, this time of a vast majority white neighborhood.

How we wiped out Kosciusko, which could have been another Soulard – Chris Naffziger – October, 2019

The urban clearance of this part of town, starting after WWII, was in full swing by the 1960s; clearance has been nearly completed in current times as fewer and fewer people-based operations give way to the almighty 18 wheelers and surface parking lots/suburban land uses. With the exception of the two streets just east of S. Broadway, this is largely a no-man’s land of former rails, barbed wire-surrounded surface lots and trucking operations. What a mess.

I will say this part of the city is too far gone to have much hope for people-scaled development. However, there is tremendous potential to weave it back into the city along the southern frontage of South Broadway that looks across that street at Soulard. This part of Kosciusko is ripe for urban-scaled infill and would complement Soulard Market and another great places in Soulard. The current view of surface parking lots serving the buildings on 7th Street is a brutal scene, one that could easily see improvement.

The other sections of the neighborhood that need some love are the north side where the long-proposed and ever-evolving Chouteau’s Landing project would touch. So much potential. But, know that so much has disappeared in the last ten years.

When the NGA moves to the new $1.7B North City campus currently under construction, something will have to happen to the current location in Kosciusko. I’m hoping for a museum. The site is extremely important to our history.

I’ll provide some updated photos to show the evolution of the neighborhood.

First some trains and older buildings to the north.

Some easternmost views right along the Mississippi River.

Some mid-century developments with some soulful places mixed in.