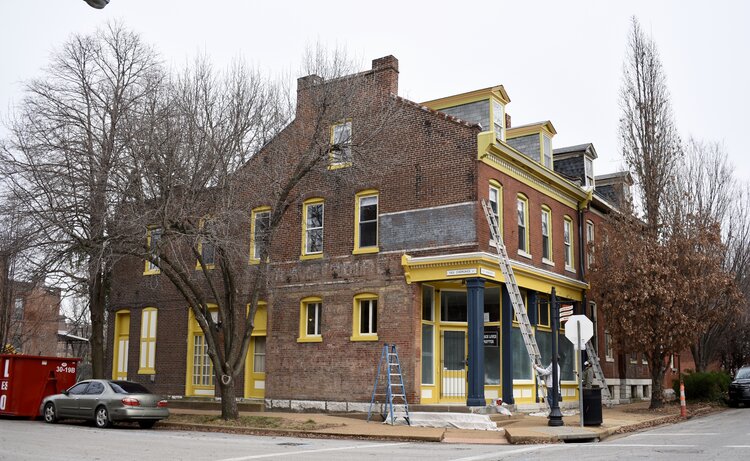 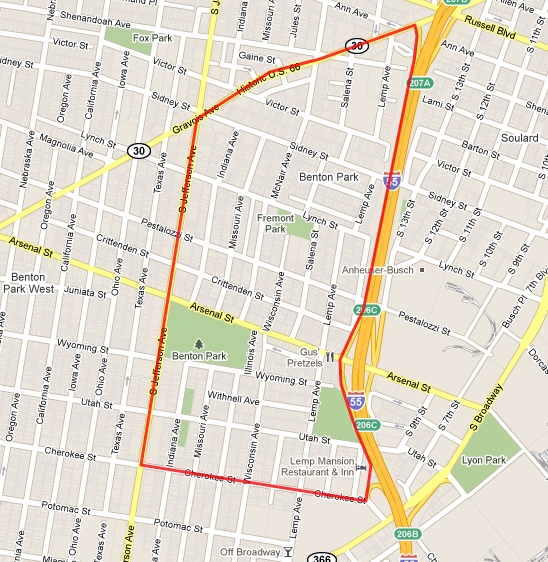 Benton Park, originally known as City Park, was created by ordinance on June 25th, 1866. The park was later renamed in honor of Thomas Hart Benton, a distinguished Missouri senator from 1821 to 1851. Its initial use was that of the City Cemetery which occupied the site from 1842 to 1865. Covering 14 acres, the park grounds were steadily improved by noted horticulturist Edward F. Krausnick, who landscaped the undulating surfaces using rare trees, shrubs and beds of flowers. Utilizing a greenhouse, rustic footbridge and two ponds, the park was used for botanical instruction as well as traditional community activities. City Parks Commissioner Eugene Weigel noted in 1881 that “in general design and in beauty and composition of its varied flower beds, it stands unsurpassed even by its aristocratic rival, Lafayette Park”.

In many ways, this is St. Louis’ other Soulard or LaSalle; but it’s much more diverse in housing styles and dining options. First of all, the neighborhood is quite different north and south of Arsenal. The south side is bordered by Cherokee, so there are lots of shops and smaller homes along antique row. This area has plenty of rehab opportunities, but for the most part it is still in tact (original homes existing on most of the streets); whereas, north of Arsenal has some more cozy streets, more expensive homes, more diverse architecture and businesses, but there are a lot of empty lots. There are many, many opportunities for good infill within Benton Park.

The tree lined streets of Benton Park have a cozy feel, most of the homes are tightly bunched and fit together quite well.

There is no shortage of corner stores both in business and ready for new uses:

There are plenty of cool sights and restaurants in Benton Park, here are some of my favorites. The South Side Consumers Dairy Co building is now a residential property. Millennium Restoration completed the rehab in June 2006, converting it to 3BR 2.5BA residence. It was originally listed for sale at $560,000:

Miller Ham, the best smoked ham I’ve ever had. We bought a 25 pounder for Easter this year; it may not look like much from the outside, but I highly recommend this place: 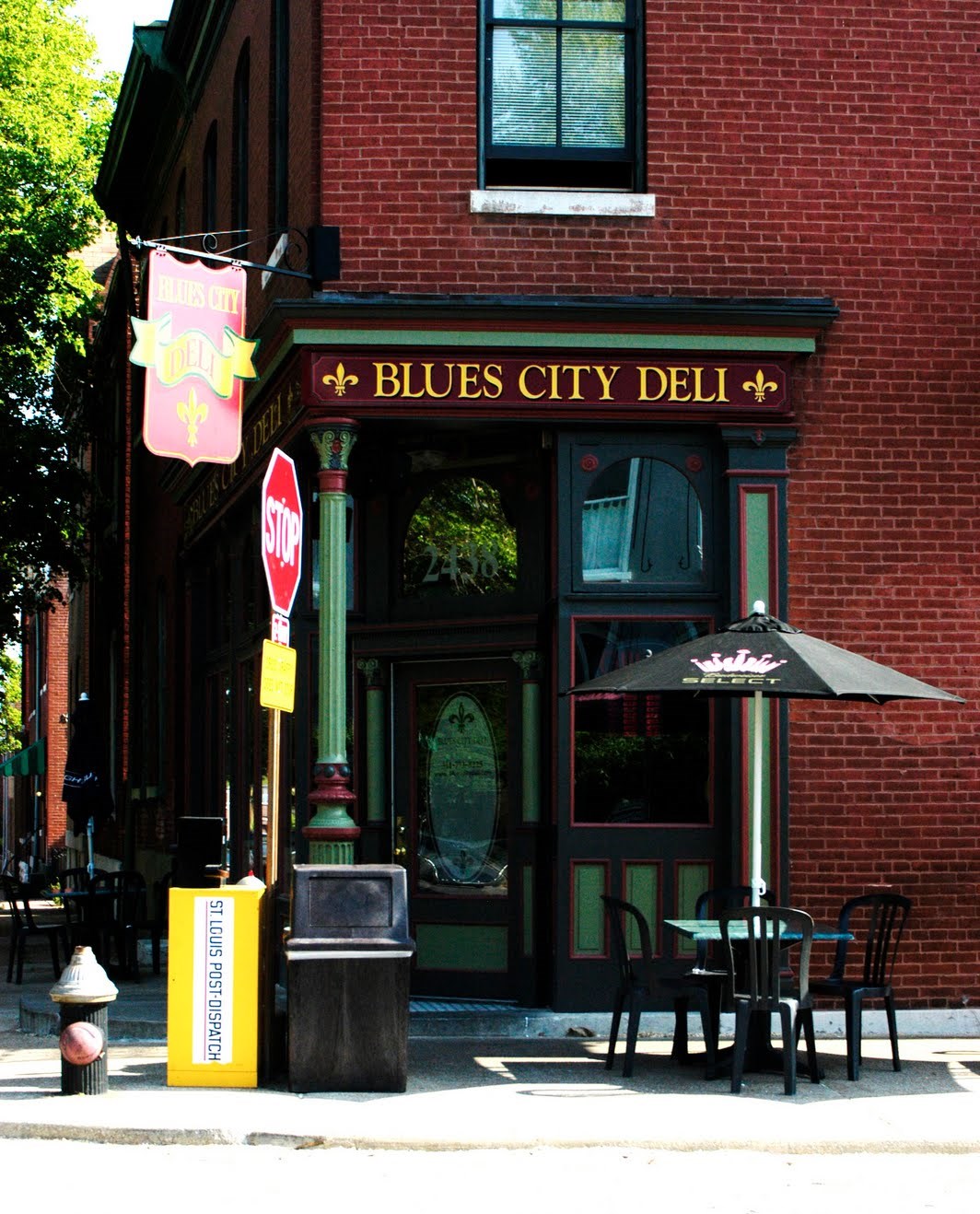 Niche serves some of the best food I’ve ever had:

If you haven’t been to Gus’ Pretzels, go today and get some “ends” or a bratwurst “sandwich”. Why these are not sold at Cardinal games, I’ll never know. These things make the city unique. You can buy Gus’ Pretzels from street vendors on corners all over the city.

A handful of beautiful churches can be found as in nearly every neighborhood in the city:

Miscellaneous residential properties that help make Benton Park what it is:

The Antique Row that exists along Cherokee is Benton Park has a coffee shop and several other noteworthy places:

There is a large building on Salena that contains an indoor skate board park among other things:

The Map Room, certainly worth checking out:

Mattingly Brewing Company (this didn’t last long, but a new micro-brewery/restaurant venture is rumored to be filling the spot in early 2011):

There is a lot of rehabbing action underway in BP, and it’s true actions (or actsions) speak louder than words and BP is on the rise:

Benton Park has so much going on, and it’s not even done yet. Check it out, it’s one of St. Louis’ finest and most unique neighborhoods.

***In January, 2021 I revisited the neighborhood and the following includes updated commentary and photos.***

Misses: I suppose the biggest miss was not mentioning English Cave.

“The cave is named after Ezra English, a St. Louis brewer, who used it to store and refrigerate his beer. In the 1840s, he opened an underground beer garden where his guests could drink, bowl and explore the cave, and upon returning to the surface, ascend in a hot-air balloon.”

“The English brewery and beer garden withered away in the wake of the 1849 cholera epidemic, when the city established a cemetery in adjacent Benton Park. In the 1880s and 1890s, a mushroom farm and a winery set up shop in the cave, but they, too, failed. Sometime in the early 1900s, the city sealed up the cave.”

Then in a 2020 St. Louis Magazine article, local historian Chris Naffziger documented the drilling and confirmation of the cave by hi-tech imagery. Next step is to drill a hole big enough for a robot to enter and get imagery for a virtual tour.

The site is on a Gateway Greening/Benton Park Neighborhood Association Community Garden.

Don’t go trespassing the hole is not big enough, you’ll get stuck.

The other miss is the lack of appreciation for the diversity of styles. The row houses, attached town homes, mini-mansions and small homes are among the best mix in all of St. Louis. The alley houses and flounders are incredible.

Also my camera settings were messed up and I’ll attempt to provide better photos in this update.

There appears to be a tremendous amount of rehabbing and home owner investment. The neighborhood looks great, it has done nothing but improve over the last decade.

As I stated in the original post, the neighborhood has always felt like two different neighborhoods, with Arsenal as a dividing line of sorts. The northern section has a different feel than the southern section. Both are diverse in architecture and mixed uses. It is an overwhelmingly beautiful neighborhood. The rehabbing has spread south of Arsenal all the way to Cherokee. Infill can be found over, I’ll share some examples that I noticed. The infill ranges from some of the best replica in the city to modern. I like that there is care on the new construction.

The four parks look fantastic. Fremont Park is in my top ten throughout the entire city and is a peaceful setting in the shadow of the former Fremont School, now apartments for seniors. I’m thrilled to see all the new trees that have been planted. Carnegie Park could use a masterplan to guide future uses and a refresh. It is a bit sparse and under-utilized. You can take a photo tour of each park in the “other reading” section below.

What are the future needs?

I would say Jefferson needs to be addressed. There is such opportunity for infill along this stretch in BP and if there was a concerted effort to give Jefferson a road diet, calming traffic speeds, you could imagine sidewalk dining and restaurant and retail lining Jefferson.

I could be wrong, but it seems BP has not jumped on the speed hump bandwagon. I didn’t run across any, but I was in a car vs a scooter/bike so I didn’t hit every street.

There is hope for some prominent eyesores, including the vacant lot at Lynch and Jefferson, where I read on CityScene STL that a developer has proposed a handsome 4-story mixed use building.

I’d love to see the rehabbing/preservation momentum continue, there are still opportunities for vacant and/or condemned homes to be in use once again. I’ll show some of these in the photos.

And of course, there are some significant historic structures that must be saved lest we lose them forever. The Falstaff Brewery #10 complex should be a city-wide priority.

The building that once housed a donut shop would be a huge preservation win, that metal and neon sign must be saved!

The following photos were taken in January, 2021.

I chose to share the photos in slideshow mode since there are so many. Just click the back or forward arrows to see them all.

I’ll start with some beautiful smaller homes, shotguns and what I call mini-mansions…those two story brick beauties with the mansard roofs. Note how they fit in so well with their surroundings.

Here are some examples of new-ish construction and infill.

There is more new construction in the works.

There is storefront opportunity everywhere, but all neighborhoods have empty retail spaces in the Amazon era.

But overall, restaurants were thriving before COVID.

There are still board ups awaiting new uses.

But mostly, you see an intact neighborhood of rows and rows of brick beauties.

The townhomes are stunning.

Churches and schools have been repurposed as apartments, or are awaiting new uses.

And of course the Lemp and Chatillon and DeMenil mansions.

Cherokee is seeing a turnover of businesses but the housing near this important street have seen much rehabbing.

I park my car and walk alleys now in the older parts of the city. There is so many cool uses of space, including alley houses and flounders.