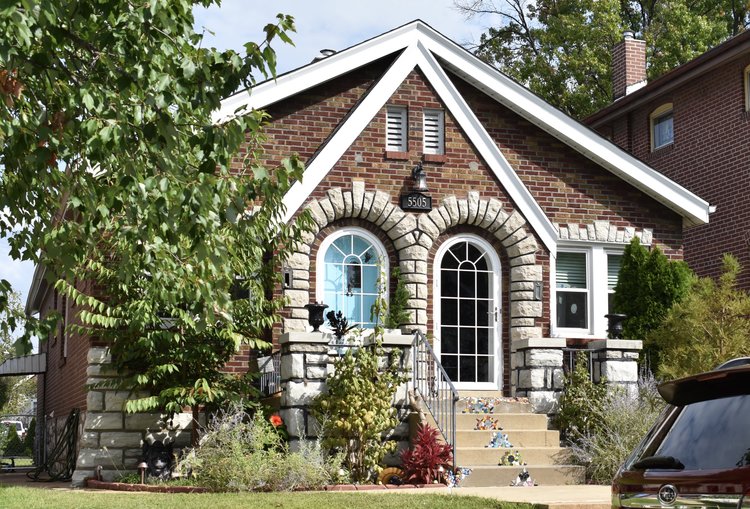 Princeton Heights is located in south St. Louis generally bounded by Gravois on the east and southeast, Hampton to the west and southwest and Eichelberger to the north. Before a family member of mine moved here, I always thought this part of town was called Southampton. Wrong, that is the neighborhood to the north.

This neighborhood has got to be one of St. Louis’ best examples of the “gingerbread house”. Street after street, house after house have the charm and craftsmanship that make St. Louis so great. Many of the houses may look the same while passing through in the car; but a nice long walk through the streets will prove that almost every home has it’s unique charm or touches that set it apart from it’s immediate neighbors.

Here are some interesting facts about street name changes over the years:

“Bonita was known as Wiesehahn, Eichelberger was known as Clark Road, Gresham was known as Kaiser, Holly Hills was known as Kansas, Nagel was known as Brunzwick, Sunshine was known as Upton. There were street names such as Mecklenburg, Bewen, Helvetia, Brunswick, Korn and Wisehann that have now cease to exist. and In 1947, Wilmore Park was created from the old Ellebeck’s Farm.”

I like the Germanic names. Sunshine and Holly Hills sound too much like a Carpenters song. What’s next Summer Breeze lane? Mmmm I can smell the jasmine.

It’s obvious that this neighborhood is tidy and well maintained. People here care and love where they live. The manicured lawns, clean alleys and beautiful homes are welcoming. Our photo excursion was taken on a beautiful fall day where we encountered many other pedestrians walking dogs, babies, etc. There is a lot of activity in this neighborhood and it appears to be very densely populated. There are very few depressed or ramshackle properties. There are no streets that look in disrepair or abandoned. The alleys are well maintained and a place for kids to ride bikes and parents to socialize:

Let’s take a look at the numbers from the 2010 census:

This is a rock solid neighborhood. My dream is to have more neighborhoods with this kind of occupancy rates and overall stable feel and healthy intra-neighborhood businesses. Here are some of my personal favorites: Arnold Hardware Gravois Glass (they do great glass and glazing work on old wooden windows), Billy Goat Chip Company, Onesto and Southside Cyclery

There is a Schnucks at Gravois and Germania that is one of the cleanest and most organized in town. Our Lady of Sorrows is a strong parish with an elementary school built in the last couple of years ($5060/year). The church seems to be quite an anchor for the neighborhood, as there are many Catholics in this part of STL.

There are plenty of available retail spaces along Macklind, which could extend the SoHa retail district from Southampton to PH. For example, this nice tree lined stretch just south of Rhodes:

One of my favorite retail spaces in the entire city:

Anyhow, PH is really about the homes and the streets, so here are some random shots of some of the beautiful properties in Princeton Heights:

It’s the little things that set these beauties apart from each other:

***In September, 2019 I revisited the neighborhood with my cousin, a long-time resident of Princeton Heights, who provided me with some insight; the following includes updated commentary and photos.***

Tom pointed out that I missed the fact that this large neighborhood is actually kind of split into three distinct parts. The area north of Gresham Avenue or maybe even Loughborough is like an extension or pre-cursor to St. Louis Hills just to the west, built near the same time with similar architectural style, completely on the grid and almost all bungalows and gingerbreads. A perfect mix of single family and multi-family.

Then you have the area south of Gresham or maybe Loughborough which is comprised of newer, likely post-WWII homes with more siding. If you are not a fan of tuckpointing responsibilities/bills, check this part of town out, it is equally tidy, clean and dense, just with more frame/sided homes. Still charming for sure. As Tom pointed out, this part of the neighborhood really is distinct from the northern section.

Then you have the area east of Kingshighway where the streets angle toward Christy and Gravois, deviating from the rectilinear grid. Like Dutch Colonial homes? Check this place out. Again, still a great, dense, charming, well cared for area. One of the best wood-fired pizzas in the city can be found here at Eni’s Pizza.

Here’s the style around these parts:

Apartments and multi-families? PH has em; many mid-century apartments exist at the southern tip right across from the awesome Willmore Park. But, there are plenty within the neighborhood as well.

There are even new-ish multi-units where a former Lutheran School was converted to lofts.

Tom pointed out that I missed a couple pedestrian shortcuts or walkways both off of Gresham, one goes north to Rhodes Avenue, the other north to Finkman Street.

Lots and lots of resident turn over. When we moved to St. Louis in the mid 1990s, this neighborhood kind of felt like a place your grandparents would live. Now there are many more young people; it is way more diverse. Tom corroborated this and said there are more joggers, dog walkers and young families pushing strollers. This is evident in home landscape too. Where every home used to seemingly have yews and pots for geraniums…there are now people investing in more modern, varied, native landscapes which is refreshing.

House prices are solid and rising. The larger homes are selling quickly with multiple bids and the smaller homes get snatched up quickly as well. Take a modest two-room home on Tom’s block that was long dilapidated after the former resident grew ill with no family to help with normal upkeep. He recently died, the home was purchased, gut rehabbed (nicely) and it just sold for $190,000. The neighborhood is highly desired, as it should be. This place is so well cared for with the sweat equity, gumption and investment it takes to maintain a great old home and property. But the turnover is not drastic nor planned, it is more organic and timed with life expectancy. I’ve sat on Tom’s back porch countless times enjoying the neighborhood vibe. Where it used to trend toward older folks who were WWII generation, now there are K-SHE boomers who still listen to classic rock on the back porches, mixed in with younger people, like Tom, who have relocated here.

Some storefronts on Macklind Avenue have been rehabbed, others lie in wait. Tom and I agree it would be great to bridge the SoHa section of the Macklind District southward toward PH. You don’t see the rows and rows of retail storefronts here, but they are spotted south to Loughborough. Point being, the neighborhood can continue to become pedestrian and business friendly as it boosts its density with younger people and families.

Hmmm, I think this neighborhood is on the right track. Not a lot to change. Residents are taking care of their properties and investing in the future. I’ll add traffic calming at two key areas to promote safety and park usage, first, at Kingshighway to make it easier to get to Christy Park, the only intra-neighborhood park which is actually on the eastern-most border; secondly, I have bump outs and cross walks near the southern terminus of Hampton to encourage safe use of Willmore Park.

Traffic calming is being taken serious here, where speed humps have been installed on Holly Hills and bump-outs, center medians and crosswalks on Wherry and Eichelberger…way to go PH!

I’m reaching here, but I’d also say some parts of the neighborhood can use more street trees. Tom pointed out one of the most beautiful streets in the neighborhood is Lisette Avenue with its large, old growth trees providing shade and making a calm, beautiful setting.