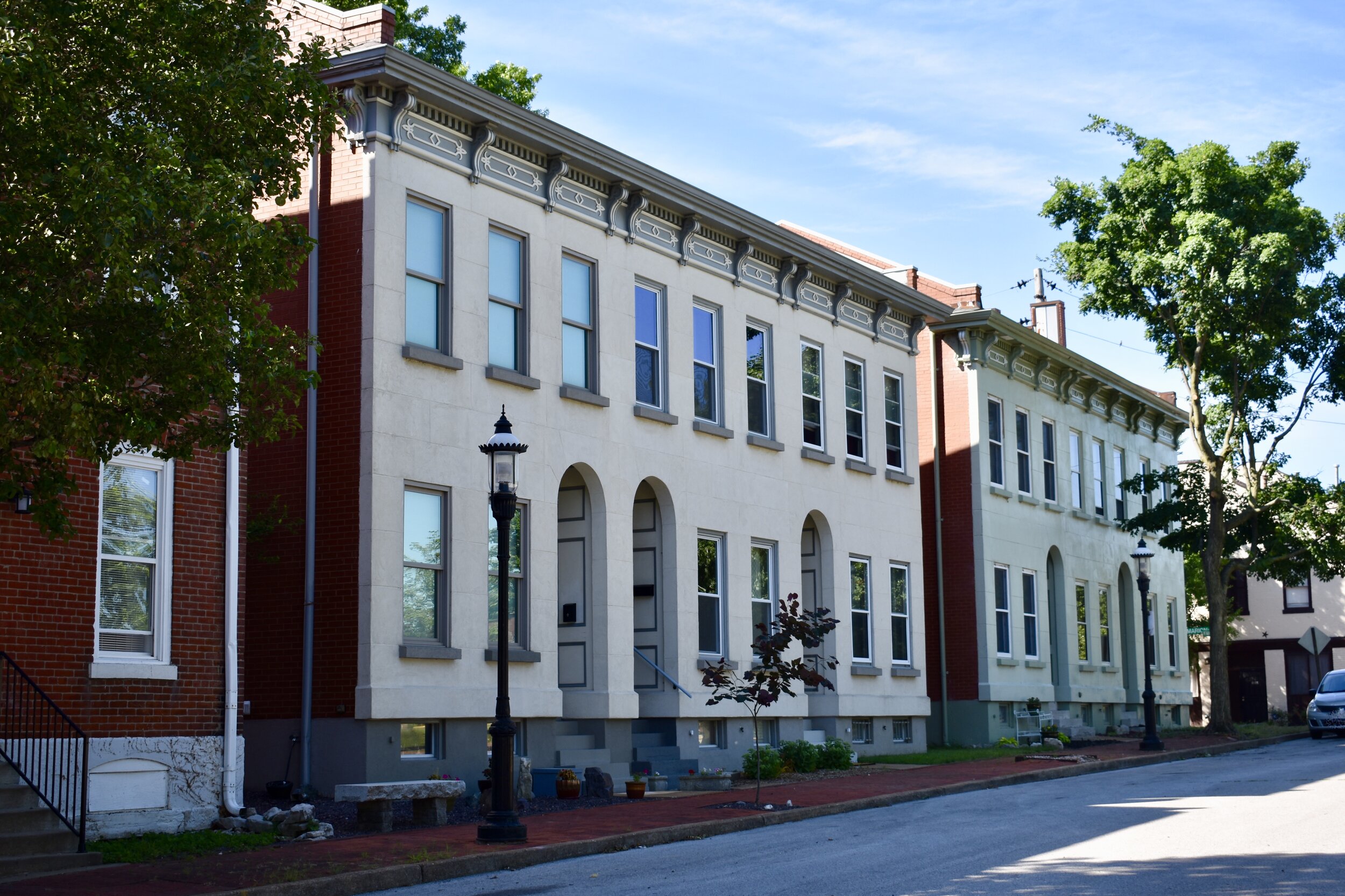 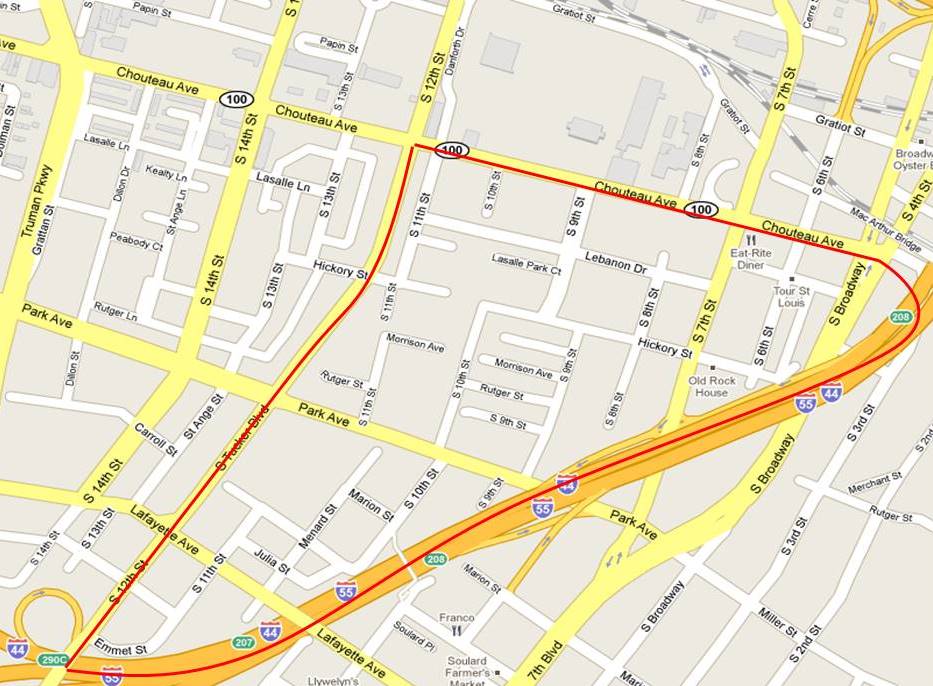 LaSalle is a south St. Louis neighborhood bound by Chouteau Avenue to the north, I-55 to the southeast and Tucker Boulevard to the west. Take a look at the street grid, it’s all chopped up and disconnected. This is my major criticism of LaSalle; that and the 1980’s looking public/low-income housing.

The north side of LaSalle is one of the most suburbanized neighborhoods I’ve visited in that there are corporate “campuses” that are reminiscent of St. Louis County or Anytown, Generica. The Lohr ABI distributorship and Nestle/Ralston campuses really set the suburban tone. But it doesn’t end there. The Maronite Catholic Pastoral Center, the Ray Leisure park/playground/neighborhood center are right out of the late 1970s, early 1980s.

The same can be said for the low incoming housing complex called La Salle Park that comes to you right out of the 70’s/80s. That’s not to say Nestle, formerly Ralston Purina, hasn’t been helpful in maintaining order in LaSalle as you can read from the exerpt from the La Salle Park website, it seems Nestle has been a good steward of the neighorhood.

A quick tour through La Salle will certainly leave you with the same impression, the fight between the old and the new. The European ways vs. the suburban American ways. Both are there in pure sight. Churches and homes dating back to the late 19th century, right next to the cheapest building materials, large surface parking lots and thoughtless design of the late 20th century burbs.

The city calls the neighborhood LaSalle, the neighborhood org. calls it LaSalle Park. LaSalle had 1,408 residents in 2000 (16% increase over 1990s count) of whom 71% were black, 27% white 1% each Asian and Hispanic. Only 650 housing units existed, but 93% of them were occupied, 28% by owners and 72% by renters. That’s a pretty hefty increase in population. I think it may be attributed to some nice new infill construction that I photographed below.

First, a little background from Wikipedia:

LaSalle Park is an integral part of the three-neighborhood “Old Frenchtown” area — LaSalle Park, Lafayette Square and Soulard — bordering the southern edge of downtown St. Louis, Missouri. It was formed as a “new neighborhood,” distinct from the larger Soulard district, through the efforts of Ralston Purina, which has its world headquarters in LaSalle Park, and The City of St. Louis.

LaSalle Park contains a mixture of Victorian and Federalist architecture. At least two of the homes in this French neighborhood were built at the time of the Civil War. New construction is also found in the neighborhood. The current urban renewal guidelines [1], approved by the City of St. Louis, require that all new construction be built in a style similar to and compatible with the existing architecture.

The LaSalle Park Neighborhood enjoys Federal Historic Status with homes that are considered to have neighborhood, city, state and national architectural significance. Plans were filed by Ralston Purina Co. and Landmarks Association of St. Louis, Inc. in 1977 (revised in 1979, 1980, 1982) to establish the historic importance of the neighborhood architecturally.

The LaSalle Park neighbor hood was “cut-off” from the rest of Soulard when Interstates 55 and 44 were built through the neighborhood. The area fell into decline even while Soulard was maintained. In March 1969, 137 acres (0.55 km2) were declared blighted and the Saint Louis Land Clearance for Redevelopment Authority applied for a federal planning grant to rehabilitate the neighborhood.

Federal funds were approved for redeveloping LaSalle Park in 1971. Brick sidewalks, extensive landscaping and street lamps designed to mirror those that were in the neighborhood many years ago were installed.

Property throughout the neighborhood was sold in early 1976 to both individuals and developers who were willing to restore homes and businesses or to build “in-fill” houses. These structures are so named because they are designed and built to match or resemble the surrounding architecture. Through the efforts of Ralston Purina and the City of St. Louis, an Urban Renewal Plan and Guidelines for upholding the integrity of the neighborhood’s properties was established.

The neighborhood continues to operate and maintain its distinctive architectural design and character through a revision of this urban plan. In 2006, all new street lamps were installed and sidewalk repairs undertaken, keeping the neighborhood a wonderful place to live.

The Interstate highways that butchered St. Louis’ neighborhoods have had a lasting negative effect. LaSalle is one such neighborhood that felt the isolation of the interstate systems dissecting it from Soulard and Lafayette Square.

Anyhow, there is still a lot of beauty to cherish in LaSalle. More than most American cities can claim as a whole. But as far as St. Louis neighborhoods go, I’d be remiss if I didn’t stress the fact that this in not a contiguous neighborhood, but rather a smattering of 19th century classics amongst a lot of late 20th century mistakes. However, I really like some of the new condos/apartments that fit in quite nicely with the older homes.

There is a St. Raymond’s Maronite Catholic Pastoral Center right off of Chouteau that is as strange as the sect itself. First of all, there is Islamic and English writing on the outside of this place. This is a Lebanese/Syrian sect of the Catholic church that dates back to the 5th century. Nothing about this church campus fits in with the more traditional St. Louis characteristics of the neighborhood:

No that’s not Lady of the Snows shrine in Belleville…

Contrast that with the St. John Nepomuk and St. Vincent De Paul Catholic churches and some other classics from the 1880’s:

Isn’t that plaque just kind of creepy? Something about the eyes and the fading color that looks like blood overflowing out of the creepy hat, coming down his face. I’m Catholic and must say their symbolism has always kind of freaked me out.

Having a partially Bohemian bloodline, I’d be remiss if I didn’t note that:

In 1854, a small group of Czech Catholic immigrants were laboring against great odds to organize the first Czech parish in America and to build a little wooden church, Saint John Nepomuk.

Here are some photos of the housing stock with LaSalle, see if you can pick out the new construction from the old:

At least I think the above is new based on the poured foundation, they fit in so well, you can’t really tell.

Here are some more familiar sights within La Salle:

Notice the Cubs Suck sticker in this next photo:

And some industrial relics:

Driving along Tucker/12th street, or Chouteau, you might not even notice the awesome homes that exist in LaSalle. But as you enter the central and southern portions of the neighborhood, you’ll think you were in Soulard or Lafayette Park, except the streets are frustratingly hard to navigate.

Congrats to La Salle for the 16% increase in residents in the last decade. Here’s to a bright future and more sensitive infill both for the low income residents and gentrifiers.

I called the neighborhood LaSalle in 2010 when it should have been referred to as LaSalle Park, the official city moniker.

I missed the wealth of alley flounders in LaSalle.

I also missed one of the most profoundly shaded blocks in the entire city. I had to use my flash to capture the scene due to the fully developed, arching canopy in the middle of the day. These home utility bills have to be at least 20% lower due to this awesome protection.

While I spoke to the frustrating series of dead end cul de sacs, Schoemehl pots and physical chasms of I-55/44 and Tucker Boulevard, which is nothing less than a connector freeway to get suburbanites from Downtown back to the Interstates, I didn’t show pictures. I will correct this miss to prove my point visually.

LaSalle might be the best neighborhood example of the destruction and isolation the Interstate Highway System brought on St. Louis.

But it’s not just the Feds that did a number on St. Louis, we did it to ourselves with blocked streets and cul de sacs built to isolate from the public housing and corporate campuses.

Another problem is land banking by churches and the continuous isolation of suburban styled corporate campuses. Of course I’m happy these religious institutions are here as I am Lohr Distributing and Nestle/Purina, but man there is no thought into making themselves a contiguous part of the neighborhood. Actually quite the opposite with massive fences, surface parking lots and sprawling grass lawns.

But don’t get me wrong, there is true beauty here. Some of the most beautiful old churches and homes mixed in with nice historic-replica infill to make this a desirable place to visit and settle down.

Since 2010, there is now a beloved local brewery, 4 Hands, who’ve made an amazing space complete with skee ball and video games on the second floor, and delicious, fresh beer on the first floor.

The St. Louis Housing Authority (SLHA) is renovating many of the residences in the LaSalle Village housing area. I’m thrilled to see the investment here. These are pretty nice 2, 3 and 4 bedroom townhouses. The 2019 rents are pretty affordable and inline with what you will see across Tucker in Peabody Darst Webbe (or Clinton Peabody as the SLHA calls it). While the design isn’t entirely urban in nature, it does its job, and it could be much, much worse.

Infill is needed closest to the Interstates and within the neighborhood. There is a recent attempt from a developer bringin several historic-replica homes called Park 10 STL; but the website is dead, so not much info on this one. There is a recently completed first home that is available.

Homelessness is a part of LaSalle Park as the Interstate easements and St. Vincent DePaul property hold a large population of homeless folks. This problem needs to be addressed regionally, and services spread out all over and not concentrated all in just a few neighborhoods in St. Louis.

Traffic calming on Broadway and 7th Street, as well as higher uses for the suburban fast food drive thru’s would go a long way toward connecting Downtown to the neighborhoods just to the south. One of the junk food drive thru’s has recently closed, so hopefully there will be attention to bring this area back for residents. There are enough cool old bones to connect the dots from Downtown to LaSalle to Soulard.

I’ll leave you with one of my favorite scenes in all of St. Louis, the ghost house outline.