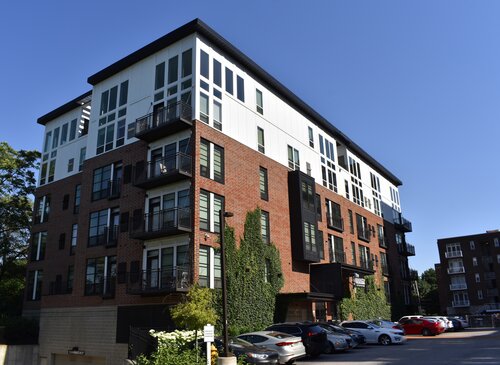 DeBaliviere Place is a central St. Louis neighborhood on the north side of Forest Park bound by Delmar Boulevard to the north, Lindell Boulevard to the south, DeBaliviere Avenue to the west and Union Boulevard to the east. The 2000 census data counted 3,436 residents (down 17% from 1990’s count) of whom 30% were black, 59% white, 7% Asian and 2% Hispanic/Latino. There were 2,409 housing units counted, 86% occupied (18%/82% owner/renter split). From 2000 to 2010, the neighborhood gained 30 residents – a remarkably stable place! There’s little room for new construction, but people aren’t leaving either.

These stats indicate there are a lot of apartments and condos in this hood. This is true, and the apartment buildings are the highlight of this neighborhood, as well as some of the most exclusive streets in the entire city: Kingsbury Square, Washington Terrace and Waterman Place.

The neighborhood has a highly desireable location as well. There is a Metrolink station that is the best stop in town in that it’s the split between the red and blue line. You can get on the Skinker/Debaliviere stop and head north all the way to Lambert Airport via UMSL or southwest to Shrewsbury via Clayton or east all the way to Scott Air Force Base via Downtown St. Louis.

Not only is the public transit excellent, the central location is as well. Think about it, a short walk/drive down Delmar and you’re in the East Loop and University City Loop, Washington University’s main campus in within a reasonable walk/ride, the Central West End is within eye-shot. Barnes-Jewish (city’s largest employer) is a stone’s throw from Debaliviere Place. Forest Park to the immediate south, man this place has it all.

I am a huge fan of the high rise and mid-level apartment complexes and condos in this neighborhood. Here are some of my favorites:

There is plenty of walkable, quality dining, retail, services and entertainment choices within Debaliviere Place:

I have mourned the loss of Velocity Cafe right at Pershing and DeBaliviere, though a new cafe has taken its place:

Oh yeah, then there are the late 19th century mansions on the private streets within DeBaliviere Place. The City of St. Louis is famous (or infamous) for its private places. Washington Terrace is just one of them. They’re remarkable to look at and the architecture and truly admirable. They’re best enjoyed without thinking too much about the social impact of private enclaves in the center of a city. There’s a beautiful coffee table book on Westmoreland and Portland Places if you want to see more.

The entry gates on Union are works of art:

Without fail, all of St. Louis’ neighborhoods have noteworthy churches. Debaliviere Place is no exception.

The Westminster Presbyterian Church on Delmar/Union:

The Grace and Peace Fellowship on Delmar near Clara:

There are some contemporary homes along Delmar that seem fairly tasteful, and fit in pretty well:

I didn’t see any public schools, but there is the LEED Platinum certified Crossroads College Preparatory School campus right on DeBaliviere:

And a slick pic from Vertegy Consultants:

Soak this neighborhood up, it’s a St. Louis treasure! This city is insanely beautiful!

There weren’t really any gross misses, so I’ll keep it short and say I’m happy with the 2010 post.

Many changes since 2000, including the addition of many, many new apartments. The Annex at 275 on the park added five stories of apartments near Lindell and Union, and the six story Tribeca Apartment building was added on Pershing Avenue just west of Union. Just across the street is another five story apartment building under construction, this one called the Chelsea (formerly Rainier One) apartments. The NYC names are a missed opportunity for localism; but, are not unprecedented. There are other apartment buildings like Central Park Apartments. So it goes. Either way, the increased density is highly noticeable. I certainly think we’ll see a rare bump in population in the 2020 Census for this neighborhood. Also a noticeable change, well, the Loop Trolley. Although the Trolly has been derailed since late 2019 due to low usage and massive cost overruns, there is hope for a bail out to revive it. The infrastructure for the defunct trolley has brought a protected pedestrian walkway along DeBalieviere Avenue that was in heavy use on my visit. The people are using it.

There has been some investment in the apartments along Delmar, including some art deco ones that are looking better than they have in years.

Neighborhood places, filling in the under-utilized retail spaces in this neighborhood, mostly along Pershing Avenue. Yet, there is a massive, urban-scaled project that will bring more residential and retail to the southwest corner of the neighborhood near Pershing and DeBaliviere. You can read about these projects in the links below.

Also, please consider opening up the streets, the dead ends at DeBaliviere Avenue and within the neighborhood are silly and go against the purpose of any street…to move traffic and lower congestion within a neighborhood.

So let’s take a fresh look at DeBaliviere Place from my June, 2020 visit.

The skyscrapers are simply beautiful, here are just a few.

The new apartments are what you might expect if you travel around to American cities from coast to coast. Forgive me if you disagree, but I like them. The form matches the surrounding setbacks and they bring in people who like new, modern living.

But I’m smitten with the three to six story apartments buildings from the 1900’s to 1920’s. Six stories might be the perfect size for St. Louis neighborhoods like this one. So big city, yet scaled perfectly for a residential neighborhood.

Some of the best examples of courtyard, U-shaped apartment buildings can be seen right here.

The trolley infrastructure is ready for the future.

Did I mention the churches and gates along Union are choice?

The newer construction is pretty decent, even though the latter example below brought unnecessary curb cuts that disrupt the original look of the neighborhood.

But, oh the street closures…these are so annoying.

Keep your eye on the area around the Forest Park/DeBaliviere Metrolink stop, urban, mixed-use development is coming and the suburban mistakes of the past are being erased in favor of density building, city choices.