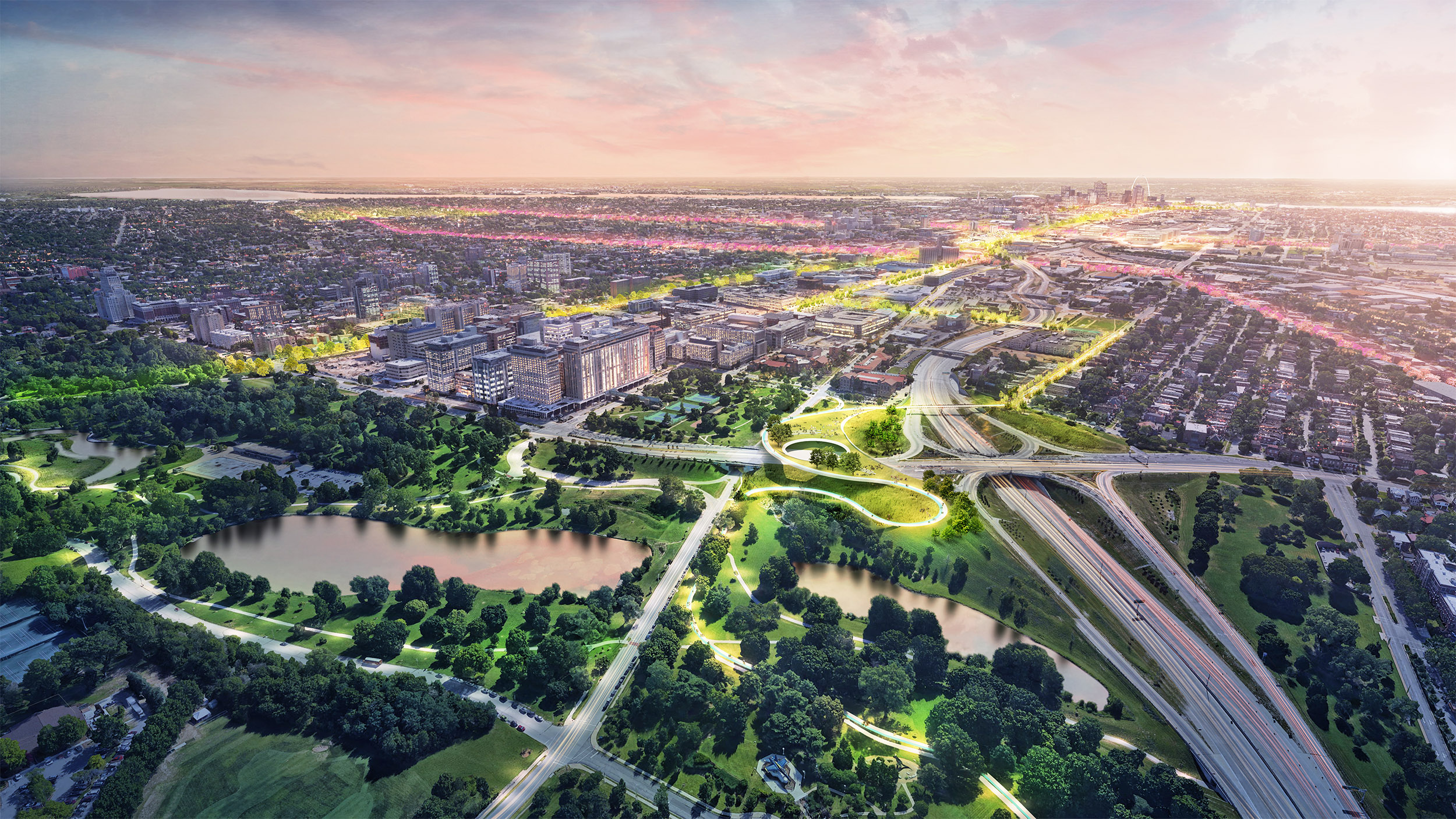 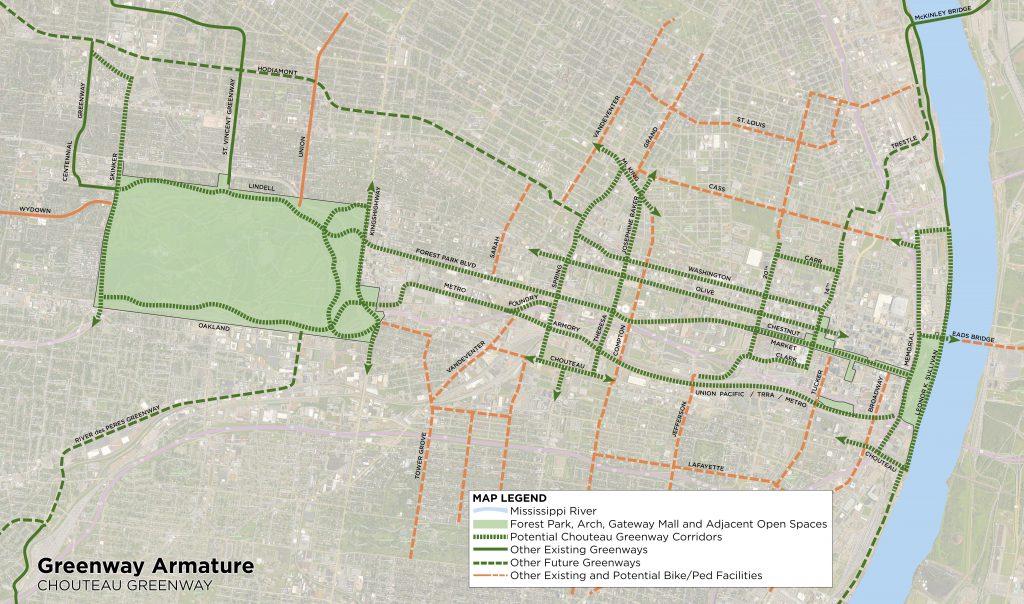 Four months ago, we first heard from the four finalist Chouteau Greenway Competition design teams about their qualifications and goals for the Greenway.  Since then, these teams have worked with both community and design advisers to develop their concepts.  Today, Great Rivers Greenway released those design concepts, and we have, as a community, the opportunity to comment and engage with these plans.

Back in January, I wrote about the design competition, and why I believed it would be transformational for the city and region.  I joined that optimism with a call for strong community engagement.  I believe that through such engagement, this project can generate economic development, further social equity, and support ecological resilience.

These were merely general objectives for which I personally advocate, but GRG’s Design and Community Advisory Committees established a much more thorough set of goals:

Now is our opportunity to measure the proposals based on this framework, to provide feedback, and ensure the Greenway achieves our collective aspirations.

Check out the brief overviews below as well as the full design proposals.  Be sure to give GRG feedback through their survey. 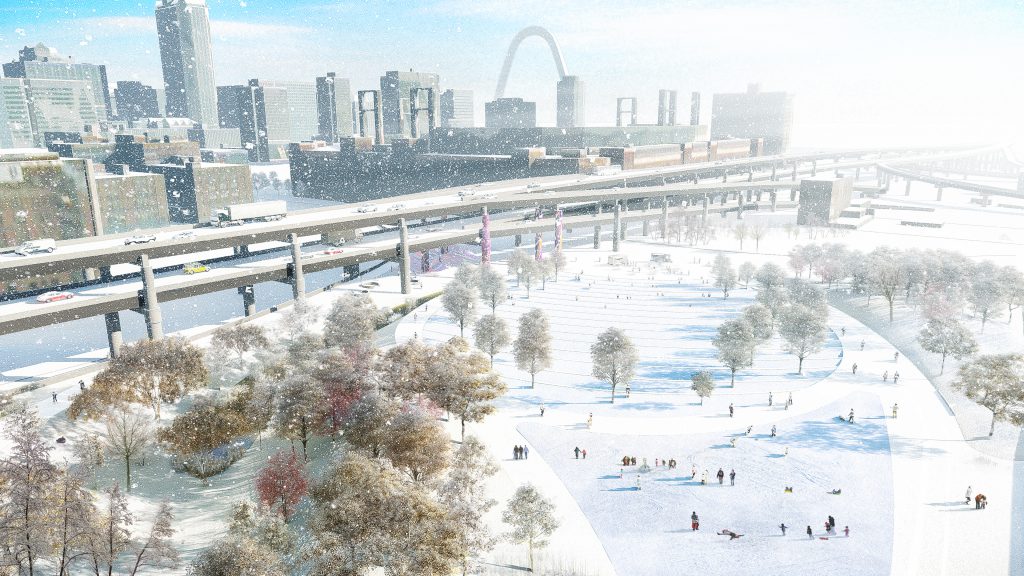 The Chouteau Greenway Braid aims to be St. Louis’ great connector, weaving together three distinct corridors: a “Green Line”, “Social Line”, and the existing MetroLink corridor.   The “Green Line” promotes health and wellness by focusing on the Greenway’s ecological interaction.  From Forest Park to the Arch grounds, this corridor strand will integrate bicycle and pedestrian experiences with Missouri’s reclaimed natural prairie landscape.

MetroLink’s current system encompasses the Chouteau Braid’s third and final strand.  This acknowledges the role of transit in achieving regional access to this new amenity.  The proposal also includes a series of North-South “Connectors” that aim to further integrate the broader city with the Main Braid system. 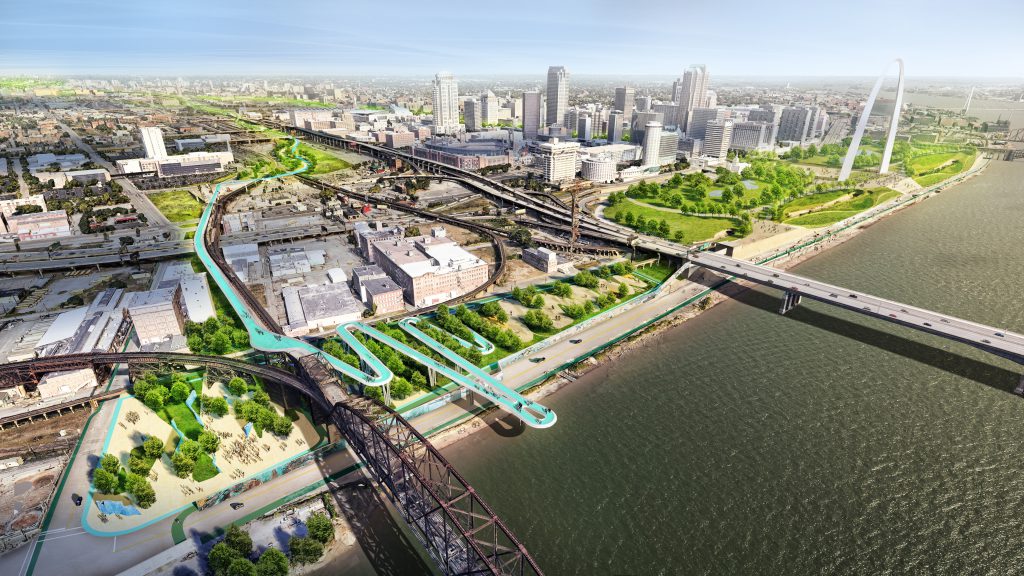 The Loop + The Stitch aspires to “promote connection, prosperity, inclusion, reconciliation, innovation and joy.” The proposal looks to join St. Louis’ current civic strengths with broader themes of inclusion and investment.  The concept takes a dual approach: The Loop, a physical link between the City’s most prominent assets, and The Stitch, a north and south extension to connect neighborhoods and underline the focus on inclusion and equity.

The Loop connects the civic and cultural icons to nodes of economic investment.  It envisions two complete green journeys from Washington University and Forest Park to the Arch.  The paths bring together both areas of current investment with those that celebrate St. Louis’ industrial heritage.

Full The Loop + The Stitch Display Board

Full The Loop + The Stitch Proposal 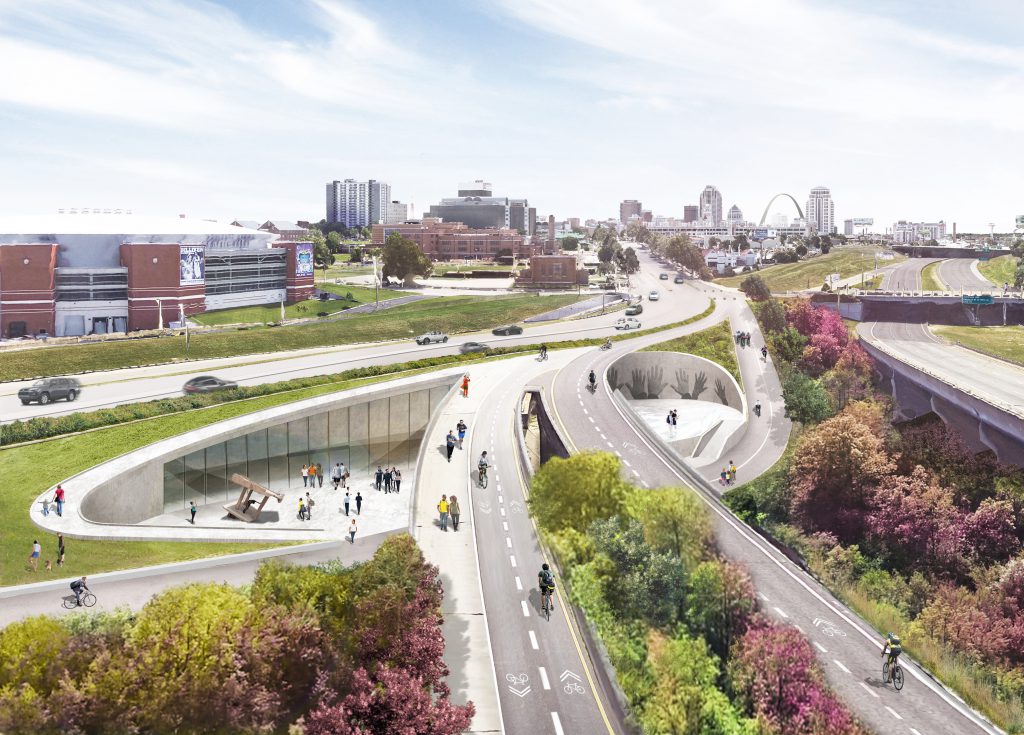 +StL envisions a new network of public spaces and corridors, which integrates with existing infrastructure while bridging the physical and psychological divide presented by such infrastructure.  To create an equitable framework for future projects, this system intends to extend as far North-South as it does East-West.  It aims to link North and South City to the Central Corridor through a layered strategy leveraging three primary themes: Ecological Loops, Equitable Extensions, and Economic Assets.

Three “Equitable Extensions” expand from the Loops, creating greater connectivity between North and South St. Louis and attempting to bridge across the Mississippi.  Investment in streetscape, transit, bike, and pedestrian infrastructure promote not only inclusive accessibility and opportunity but also improved safety and security.

+StL also aims to catalyze additional investment through building on existing “Economic Assets”.  The Greenway will connect and strengthen the public realm between these assets of all types and sizes, strategically incentivizing equitable development in current places of disinvestment and void. 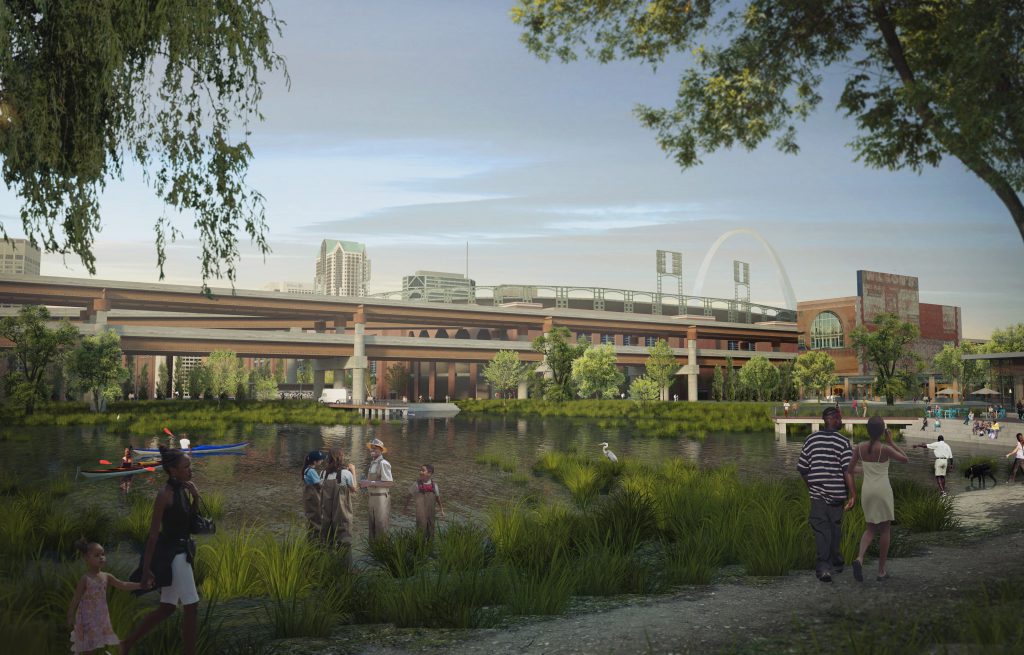 Chouteau Greenway: One City Belonging to All – W-Architecture

The One City Belonging to All proposal envisions a new St. Louis connecting the “City of Islands” through a framework that reclaims the central valley between them.  The framework creates a strong East-West Connection, with improved streets and bike and pedestrian pathways, between Forest Park and the Arch Grounds.  From this connection green ribbons extend north and southward, linking those neighborhoods, Tower Grove, and Fairground Park.

The new East-West experience creates two distinct greenway paths: the Forest Park Market Greenway and the Valley Beeline.  Together, they use green infrastructure to create naturally blended urban public spaces, including reclaimed wetlands and native habitat as well as a new downtown pond.

The new North-South experience aims to link those physically and socially disconnected neighborhoods to the central corridor and each other as well as “plant the seeds of investment”.  To do this, the proposal requires equitable access and creates multiple shared spaces to encourage mingling and establish community common ground.

Full One City Belonging to All Display Board

Full One City Belonging to All Proposal

Concepts will be on display at Chouteau Greenway Community Kickoff Night on Tuesday, April 10th from 4:30 to 7pm at the Sheldon at 3648 Washington Blvd. in Grand Center.  The event is open to all, with free parking, bike valet, refreshments and a cash bar.

Boards will be on display at several locations throughout the St. Louis City from April 6 to April 22, including:

Community Members are also invited to see the teams present their plans to the Jury Wednesday, April 25th at Harris-Stowe State University from 8:30 am to 4:30 pm.  This event will also be live streamed on Great Rivers Greenway’s Facebook page.

Will is a St. Louis native and City Planning Masters Candidate at the University of Pennsylvania.