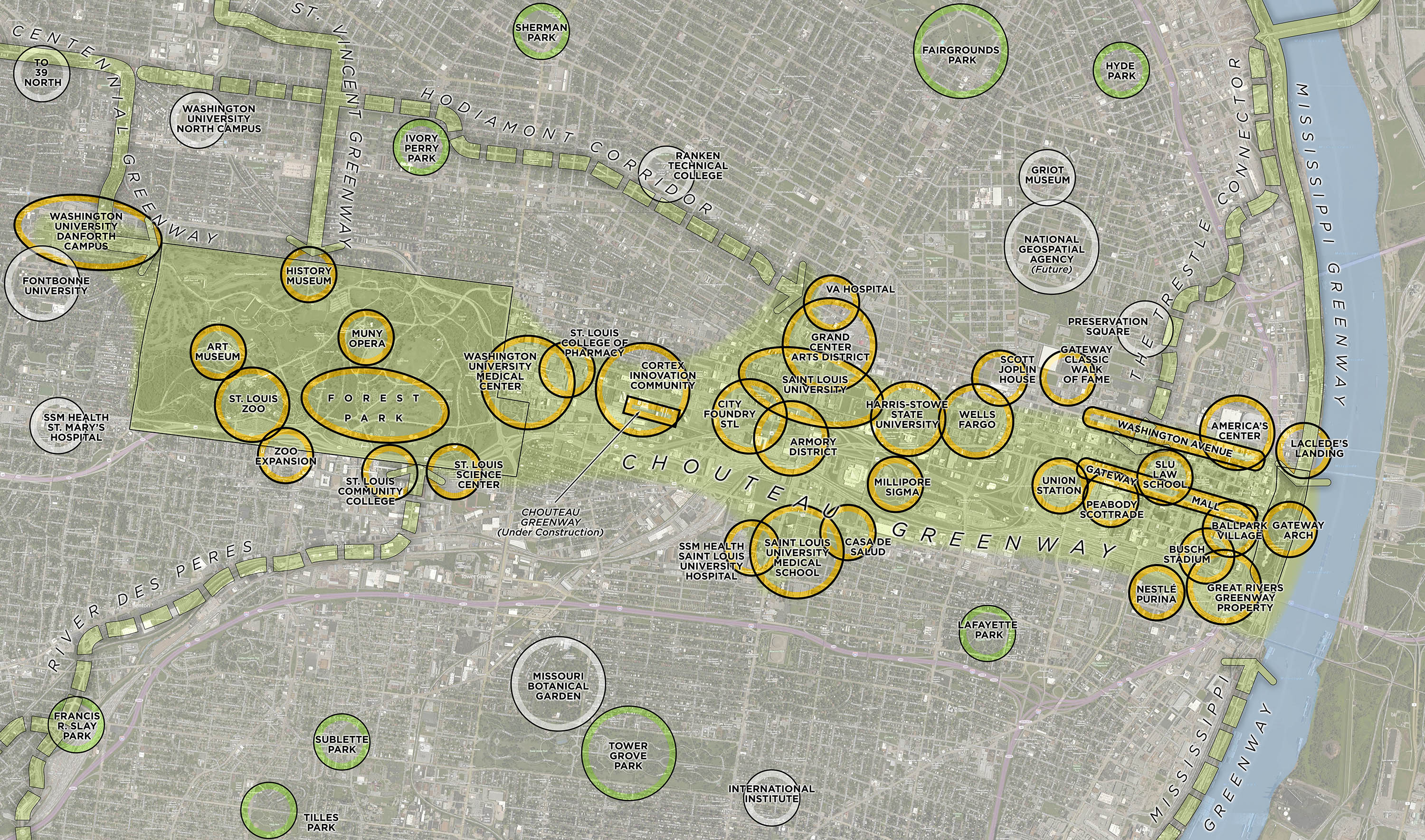 If you haven’t yet heard of Great Rivers Greenway (GRG) or specifically the Chouteau Greenway, you’re missing out on one of the most exciting developments planned in St. Louis.  GRG, the regional public agency created in 2000 to maintain and develop the metro’s trail network, has begun planning a massive new project: the Chouteau Greenway.  Continuing a national trend of urbanism landscape interventions, the new greenway will connect the Arch Grounds to Forest Park via a continuous pedestrian corridor.  For this specific greenway section, GRG decided to go all in by launching a design competition that received 19 international bids and has since selected 4 finalists.  These finalists, each receiving a privately funded $75K honorarium, now have until April to design a full plan.

While developers and business leaders have long promoted big projects to St. Louisans with failed promises of large-scale revitalization of the urban core, this greenway could actually get the ball rolling.  Whether you’re a chronic skeptic or cavalier Show-Me enthusiast, you’re likely wondering how this project will be any different than the rest. Let me explore how the Chouteau Greenway could spark widespread urban revitalization.

The project provides a great opportunity for St. Louis with vast potential for large-scale economic development, improved social equity and mobility, and more resilient ecological infrastructure.  We should measure success across all these dimensions.  Fortunately, in the context of similar projects in other cities, St. Louis is well positioned for the Chouteau Greenway to achieve ambitious goals.  While I hope to inspire optimism and support, above all, I desire to encourage active community participation.  Starting with the community meetings this Thursday and Saturday, we all have an opportunity to do so.

Now, let’s consider how other cities have approached similar projects, and how St. Louis stacks up:

In 2009, New York City’s Department of Parks and Recreation completed the conversion of roughly a half-mile stretch of elevated industrial rail to a linear park known as the High Line. Since then, the trail has been extended only one mile further, leaving a massive boom of economic development in its wake.  Two years after opening, the New York Times attributed $2B in economic development directly to the High Line–not a bad return for the initial $153 million spent.  Further, the city expects $1B in increased tax revenue over the next 20 years.  With more than 7 million visitors annually, the High Line proves the effectiveness of good design, adaptable reuse, and placemaking in economic development.

While it’s tough to compare St. Louis to New York, given its size, the economic development generated by the High Line suggests great possibility for the Chouteau Greenway.  In many ways, our Greenway will be built on greater fundamental strengths. The High Line expanded a short 1.5 miles through the transitioning neighborhood of Chelsea; the Chouteau Greenway will cover roughly 5 miles through St. Louis’ institution-rich central corridor. By connecting people with where they are to where they want to go, the project would incentivize continuous investment throughout the central corridor and bolster the tax base.  The Chouteau Greenway will go farther than any other recent large-scale project in promoting a vibrant urban core, where people want to live, work, and play, which is essential to the health and growth of the entire region.

Even with all its benefits, the High Line is not without criticism.  The consequential economic development largely excluded lower-income communities of color, and dramatic increases in living and housing costs around the High Line displaced many long-term low-income residents.

The High line isn’t the only greenway to face critique.  Atlanta’s Beltline project also struggled to ensure equitable distribution of economic gains.  The city required Atlanta Beltline Inc., which manages the project, to fund at least 5,600 affordable housing units around the trail network by its completion date in 2030.  Though a noble promise, its realization has fallen significantly behind with the managing agency primarily to blame.  For these kinds of projects to achieve the full-scale urban revitalization they desire, they must consider those populations that stand to suffer from the very beginning.

While St. Louis happens to be one of the most affordable cities in the country, many of its best amenities are concentrated in higher income areas around the central corridor and in south city.  The Chouteau Greenway can and needs to improve equitable access to those amenities.  In addition to the physical aesthetics, the final design plan must include planning controls and funding mechanisms to ensure new affordable housing development as the area experiences increased investment.  The public must engage with and hold GRG accountable.  For starters, we could encourage them to join the High Line Network, a collaboration of similar projects, which aims to learn from earlier mistakes and tackle the gentrification caused by these projects.

We are familiar with Hurricane Harvey and the tremendous damage it wreaked on Houston.  What you may not know is that a Greenway network, regional in scale like GRG, presents Houston with a viable solution for future storm events.  Their Greenway may also accomplish economic development goals, but its impetus would be to protect the city from another hurricane like Harvey.  Building resilience has become a top priority.  The Bayou Greenway network would provide the city with a natural system to retain and direct the flow of water and well as provide a community amenity.

Like Houston, St. Louis has a great opportunity for ecological planning.  At the confluence of three major rivers, St. Louis’ aging water infrastructure is a pending liability. The city experiences one of the highest rates of flooding in the country.  While the Metropolitan Sewer District works to win a national infrastructure loan and repairs the aging system, I wonder how much consideration has been given to the natural systems that could just as effectively relieve infrastructural pressure.  Great Rivers Greenway, and specifically, the Chouteau Greenway presents a significant opportunity to support a sustainable solution.  Historical Chouteau’s Pond, which lies directly in the new greenway’s path, was drained back in the 19th century and replaced by a now underutilized rail yard.  Its remediation back to a pond would not only provide a tremendous city amenity but also might help reduce the burden on the city’s storm system.

While there is still much to be worked out, and the design competition has just begun, the Chouteau Greenway gives St. Louisans a real reason to be optimistic.  To ensure a successful and equitable result, we must turn that optimism into engagement.  The two upcoming community events this week present a great opportunity for those who wish to learn more and be a part of shaping the region’s most exciting project.

Will is a St. Louis native and City Planning Masters Candidate at the University of Pennsylvania.