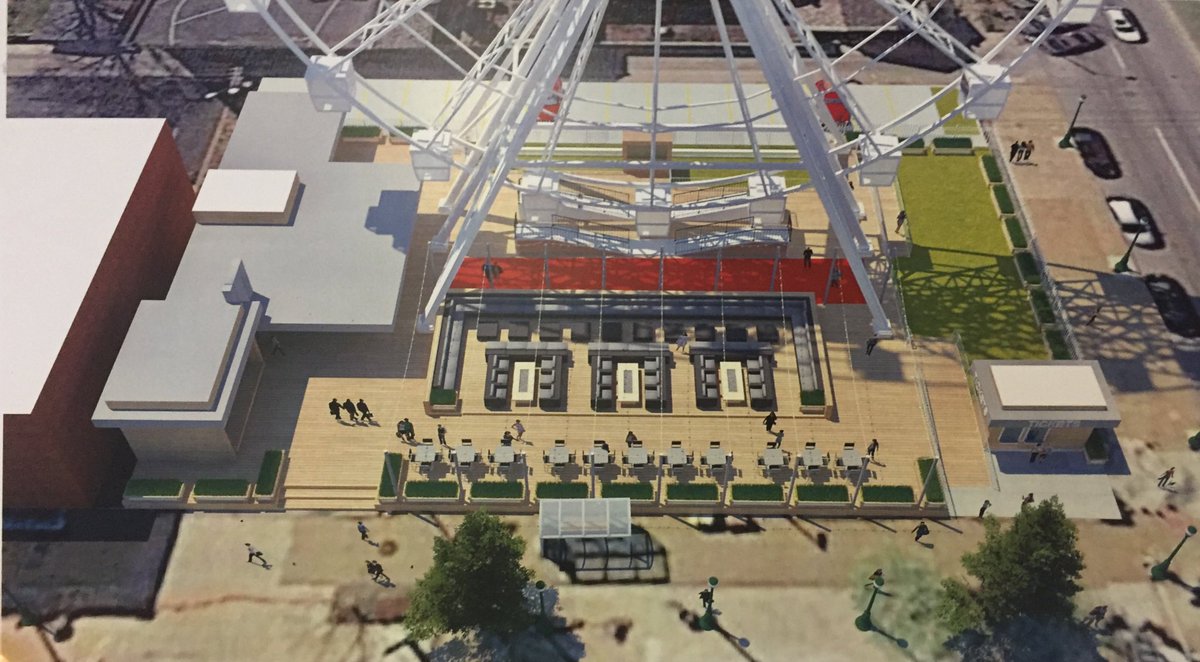 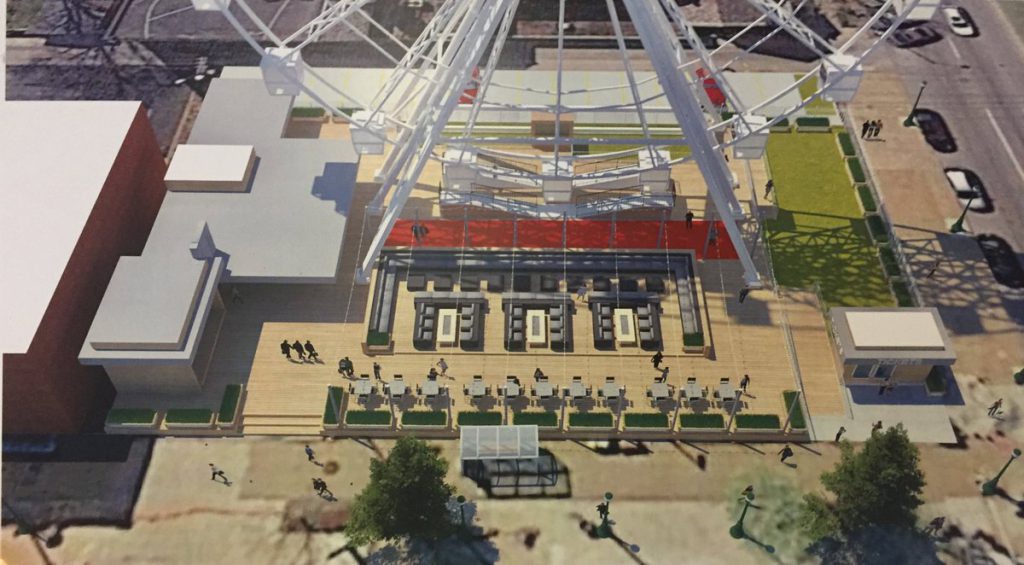 A 120-foot diameter Ferris wheel is proposed for the southeast corner of Delmar and Skinker in The Delmar Loop. Tony Sansone, Jr. and his son Michael Sansone of Sangita Capital Partners, and Todd Schneider of Pacific Development LLC kicked off the community engagement effort by presenting the plan to the Delmar Commercial Committee Thursday. They hope to add a family-friendly attraction to the walkable entertainment district. 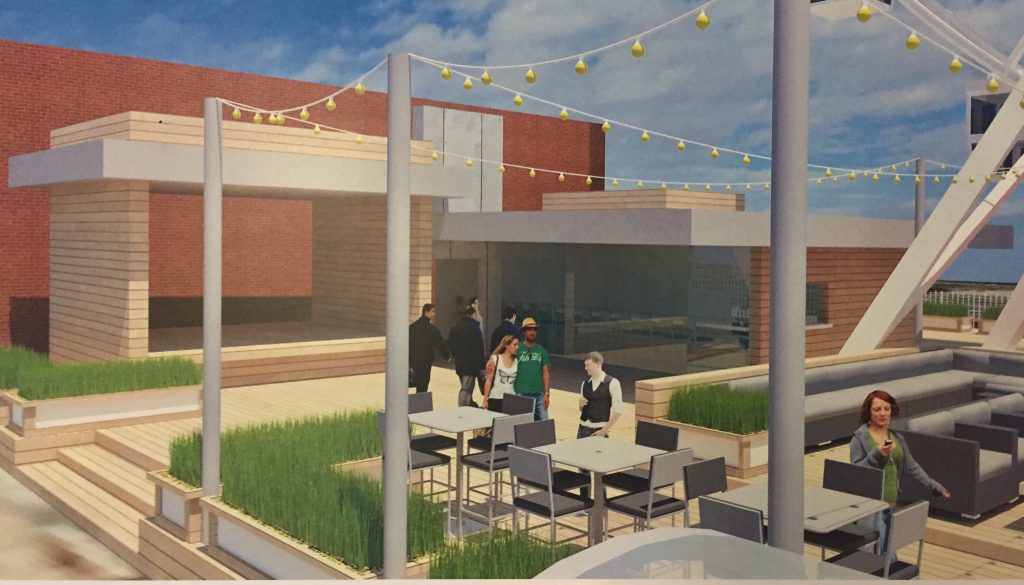 The wheel includes 20 fully-enclosed climate-controlled gondolas with capacity of six each. One ride would consist of four trips around, and your group wouldn’t be expected to ride with others. The site would include concessions including a beer garden. The operator also operates Skyview Atlanta, a larger (20 story) Ferris wheel in Centennial Park. They would sign a 10-year lease for the property and would not seek tax incentives.

Concerns about parking, distracting drivers, lighting, and height were expressed. The site plan shows 15 on-site parking spaces along the alley, and they are working on the possibility of using the New Cote Brilliant Church parking lot northwest of Skinker and Enright. They reassured the committee that lighting would not be overwhelming. Its height would be between the 8-story Moonrise Hotel and the 14-story Everly apartment building. Dwarfing the church next door is a concern for some congregation members. 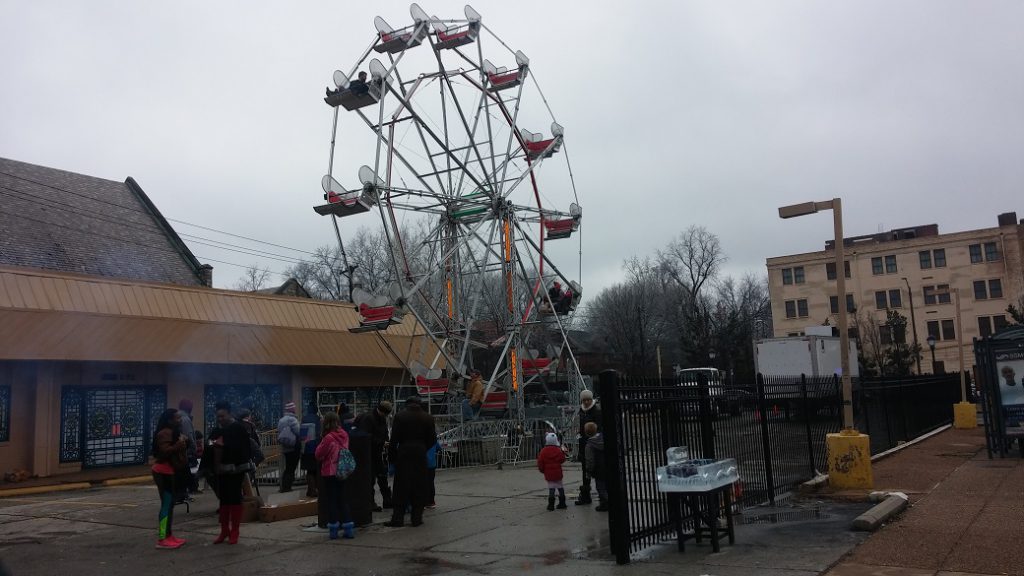 {A smaller and much less fancy mobile Ferris wheel was at the site during the Loop Ice Carnival in January.}
The parcel is currently zoned F-Neighborhood Commercial which has a height limit of three stories and 50 feet. The Ferris wheel would require a variance. It is within the Skinker-DeBaliviere-Catlin Tract-Parkview Historic District. The Delmar Link Area Redevelopment Plan ordinance applies as well.

{H3 Studio}
The almost 4-year vacant site (which I call both my muse and my nemesis) is shown in the Skinker DeBaliviere Neighborhood plan as a traditional building replacing the boarded-up 45-year-old fast food building. The last idea we heard about was for a paid parking lot which went no where. Michael Sansone said the owner of the property refuses to sell at a price that makes such a development feasible. 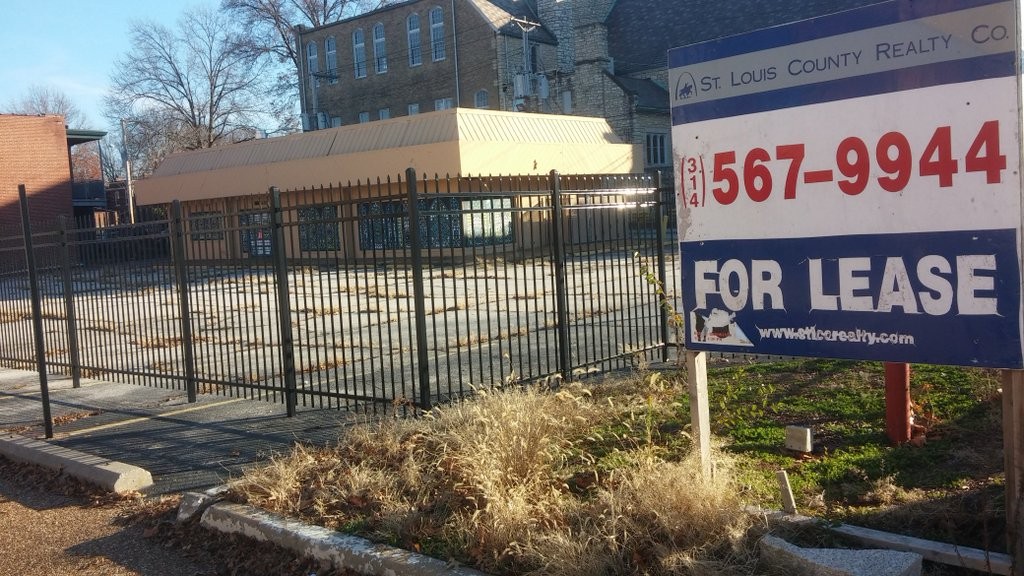 The current condition is a poster-child of a low-productivity auto-oriented land use. It has an assessed value of $296k per acre. Across the street the single-story Pin-Up Bowl is $821k per acre. Snyder said the project cost would be about $4M. If its appraised value equals that the parcel’s productivity would top $3M in assessed value per acre. From a land productivity perspective, provided my assumption of the Assessor’s assessment is correct, it’s a big improvement.

Another consideration is the tension between adding land uses that attract more people to the Loop from outside the immediate area and those that serve residents and workers on Delmar and in adjacent neighborhoods. Or the desire for more family-friendly activities nearby. I’ve wondered what the impact of not having something like the Highlands that’s accessible to young people without a car to give them something to do. Or land uses that enhance walkability to foster car-optional living versus those that attract more cars. For example Skinker DeBaliviere lacks senior-compatible housing. This site could have a building with an elevator and would be within walking distance to necessities and transit to other parts of the city (like medical services in the CWE). Accommodating less parking would make the rents more affordable.

How many big Ferris wheels can St. Louis support? Do we wait for something better for an unknown amount of time? They are certainly other perspectives to consider. What’s yours? Let’s discuss.