There are a handful of residential buildings facing Kingshighway in the Forest Park Southeast neighborhood. In one view they’re woefully out of place, fronting seven lanes of a traffic and an interstate interchange. In another view, the homes anchor the edge of the residential neighborhood, holding and presenting its identity to those hurriedly passing through.

The homes on the west side of Kingshighway, in the tiny Kings Oak neighborhood, don’t seem nearly as challenged, but these FPSE four-families have been in limbo for more than a decade. Three years ago we write about Drury Development’s acquisition of these homes and others. It was a somewhat surprising expansion of its holdings. The 2008 hotel tower proposal seemed long gone, but with that move, seemed to still be alive.

Now Drury is seeking to demolish the building at the corner of Oakland Avenue and Kingshighway, just one of the row which has been assumed would make way for a hotel entrance if the plan ever comes to pass. Demolition will be considered at the city’s Preservation Board meeting later this month. We’ve watched this plan and process for nearly a decade, and it’s once again time to take a look at past proposals and current Drury holdings: 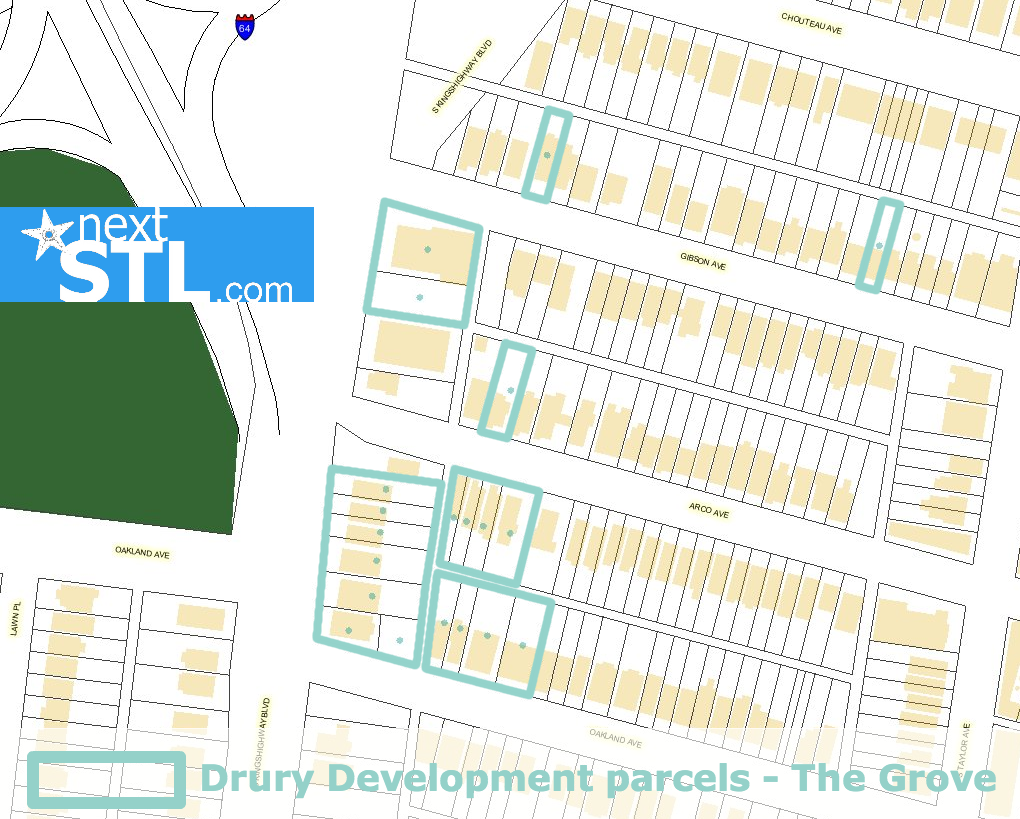 Back in August 2008, Drury presented plans for two 16-story hotels towers with a total of 690 rooms. The idea received a mixed response from a packed church of more than 100 residents. Then the recession hit full force. Plans were put on hold.

Drury is currently focused on the completion of the 210-room Drury Inn & Suites Brentwood at Interstate 64 and Brentwood Boulevard just a few miles west. If that hotel performs as expected over its first year or so, the company’s attention is likely to turn to Forest Park Southeast (The Grove). 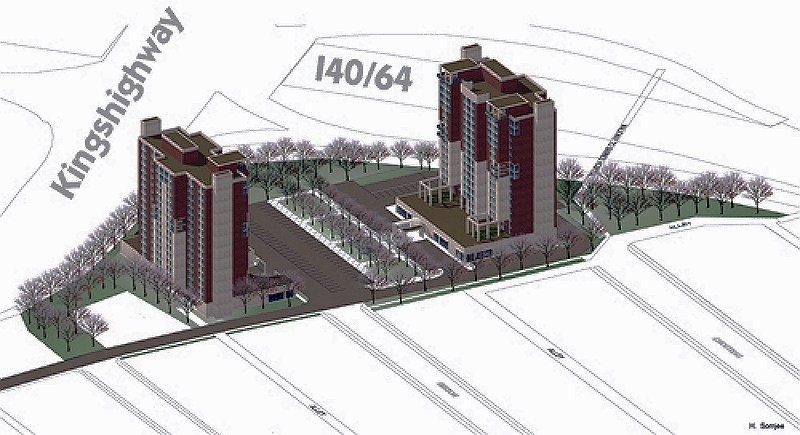 There are currently no revised renderings or site plans available, and Drury has not decided whether to pursue a plan similar to its 2008 proposal. The 15 parcels are added to five already owned by the company at the northwest corner of the neighborhood.

A Drury representative told nextSTL that the company had reached a point that it needed to make a decision on the FPSE site. The parcels had been marketed by KH Ventures LLC for several years. A number of the buildings have been vacant for up to a decade.

Drury plans to renovate a half dozen or more properties on Oakland and Arco. Current plans include renovating 4564 Arch and 1074 S. Kingshighway. Two homes on Gibson (4571 and 4521) will also be renovated as rental properties. The Gibson homes were acquired as part of a package with the church property several years ago. 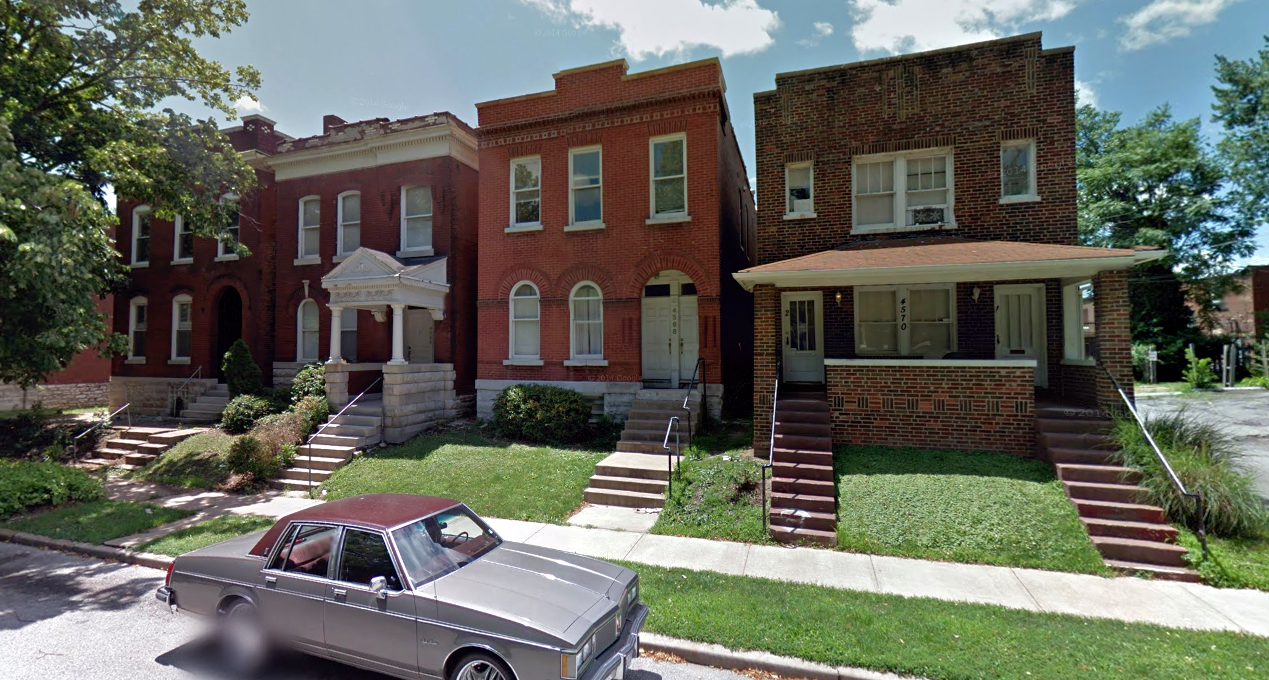 At that time, the idea of historic homes serving as hotel rooms or extended stay hotel rentals as a buffer between the hotel and residences was floated, and Drury stated that the church itself may form the lobby of the new development. It’s unclear if these ideas will be pursued.

This corner of the neighborhood has clearly been a target for development since at least the time MoDOT’s plan to remove the expansive I-64/Kingshighway cloverleaf interchange came along. Since then, some truly horrific plans have been floated.

While dead-on-arrival with zero chance of support from the neighborhood, or alderman, the K2 Commerical Group promoted images of a CVS, QuikTrip, and several office buildings. The idea would have required the demolition of more than 120 residential units. 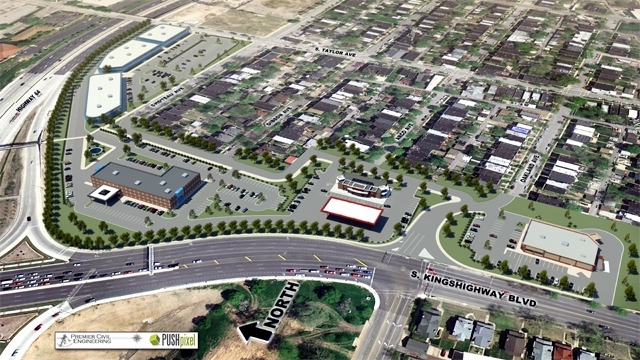 {the K2 plan would have faced a mountain of opposition}

The site is challenging to access, and neighborhood residents have made it clear that they would not like to see hotel traffic on residential streets. Any development would require access at Oakland Avenue, the end of which was recently permanently vacated by the city, removing access to the neighborhood from Kingshighway at that point.

While the expanding adjacent medical center is seen as underserved by hotels, this is changing. A Hilton Home2 hotel is planned for the northeast corner of Chouteau and Taylor Avenues nearby, and the Cortex development further east is planned to include a hotel.

{buildings facing Kingshighway will likely be targeted for demolition}