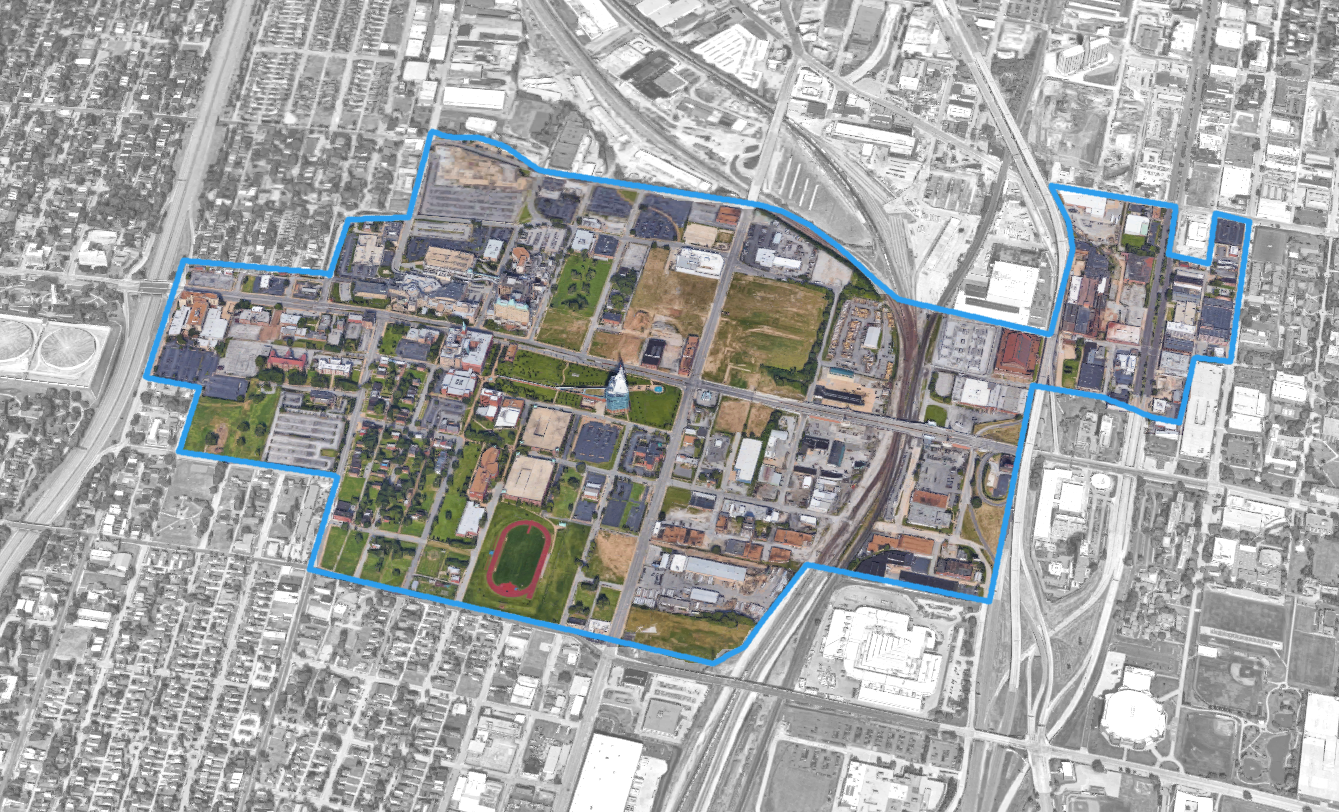 The city is set to blight 395 acres, a total of 610 parcels, across the neighborhoods of Midtown, The Gate District & Tiffany. The blight designation, recommended to the Board of Aldermen for approval, would be a precursor to a plan by a redevelopment corporation affiliated with Saint Louis University.

Notably, the 395 acres encompass the Federal Mogul site, where Lawrence Group, a partner in the $550M SSM/SLU hospital project, has announced the $340M City Foundry project across from IKEA. On the other side of the big blue box, the next phase of Cortex development is expected to be announced soon. Also included is the vacant Armory, now owned by Green Street Development, which is pursuing its redevelopment as an event and concert venue, and even Humphrey’s bar which will be demolished and replaced.

The redevelopment area is massive, touching I-44 on the south, Laclede Avenue to the north, 39th Street and Vandeventer to the west, and Compton to the east.

A blighting study has been completed by Development Strategies. Select findings were presented to the Planning Commission included: 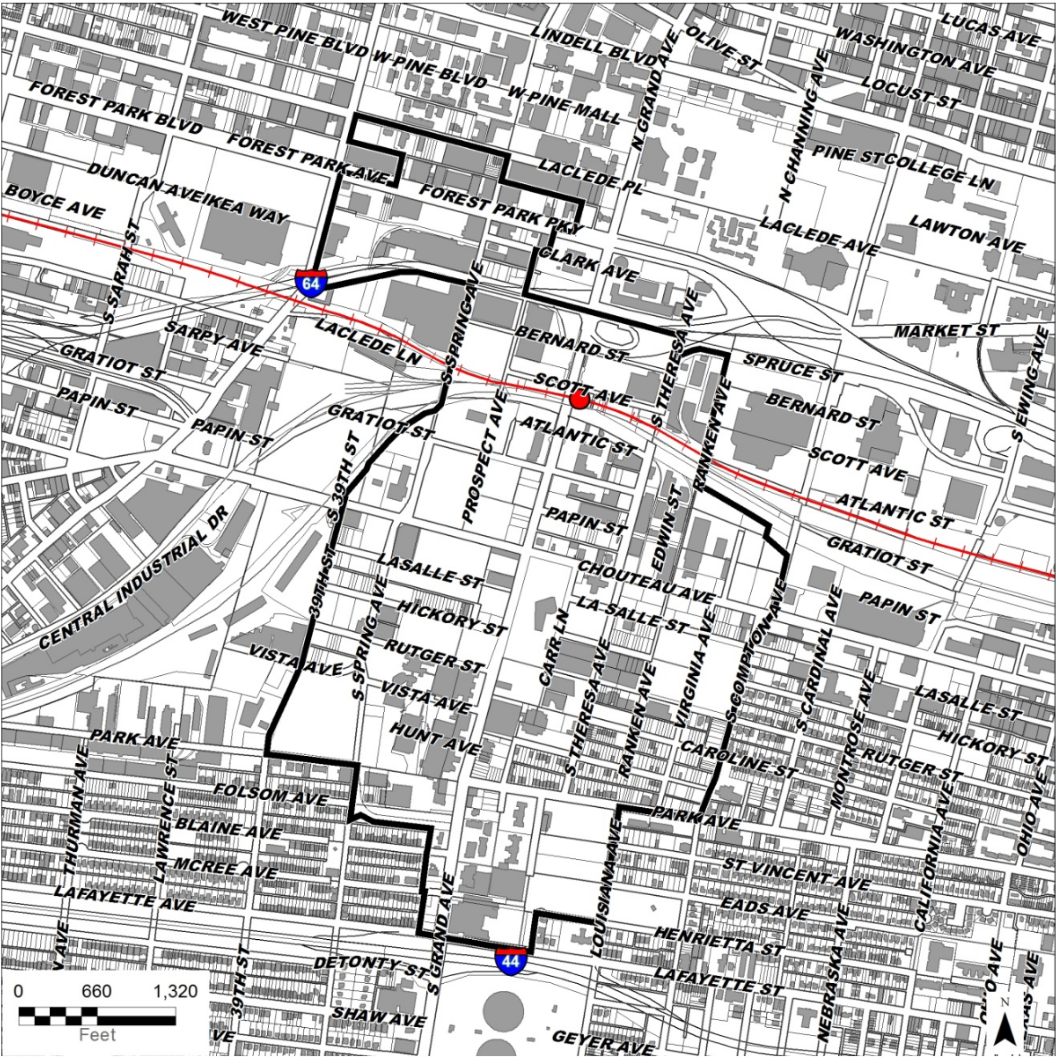 We wrote the following when the city blighted 100 acres of north St. Louis for the future home of the National Geospatial Intelligence Agency:

A building, a block, a neighborhood, is blighted in St. Louis on quite a regular basis. To some “blighting” is a simple economic tool. The designation provides access to various local, state, and federal economic development funding. “Blighting” is also more art than science. In common use, a “blighted” area is one that is underperforming economically (generally, not producing enough tax revenue). Just about anything can be “blighted” by citing deferred maintenance and repeating the word “obsolete”.

The state of Missouri defines a “blighted area”, as “an area which, by reason of the predominance of defective or inadequate street layout, unsanitary or unsafe conditions, deterioration of site improvements, improper subdivision or obsolete platting, or the existence of conditions which endanger life or property by fire and other causes, or any combination of such factors, retards the provision of housing accommodations or constitutes an economic or social liability or a menace to the public health, safety, morals, or welfare in its present condition and use.”

Not only does the definition read as rather archaic, blight analysis updates, such as this one concluding last year that the 246-acre Cortex district is in fact still blighted, relies on statements such as: “According to the St. Louis Metropolitan Police Department statistics, crimes against property continues to be a problem in selective portions of the Redevelopment Area.”

So what does a “blight” designation do anyway? It provides the authority for the city to grant an entity redevelopment rights to an area. The designated developer can then be granted incentives such as tax abatement and the authority to condemn properties within the blighted area, forcing a sale. Basically, it gives an entity chosen by the city the power to dictate development, including on property not owned by that entity.

As we first examined the case for blighting 395 acres, we Tweeted, “Does there exist a consistent, fair argument at this point for not simply saving time and blighting all of St. Louis City?” It was a little tongue in cheek, but the question is better than first understood. In fact, according to the Show Me Institute, more than 1/3 of the state of Missouri is already blighted.

Using the definition of blight, it’s a rather easy argument to blight the entirety of the City of St. Louis. Crime? Yep. Defective or inadequate street layout? Sure, some people think so. Unsanitary, unsafe? Plenty of old sewers and other infrastructure out there. “Any combination of such factors…constitut(ing) an economic or social liability.” Uh-huh.

As we learned from the St. Louis City Economic Incentives Report, first revealed on this site, granting of tax abatement, Tax Increment Financing (TIF), and other incentives is extraordinarily widespread in the city. And there’s no true considering of the need or impact of those incentives. And there’s no effort to consider if the incentive was productive. That isn’t to conclude that all incentives are unnecessary, but rather to argue that we can’t know which are necessary within the current process. The most common criticism arising from the report is that incentives used most often in parts of the city with market demand. 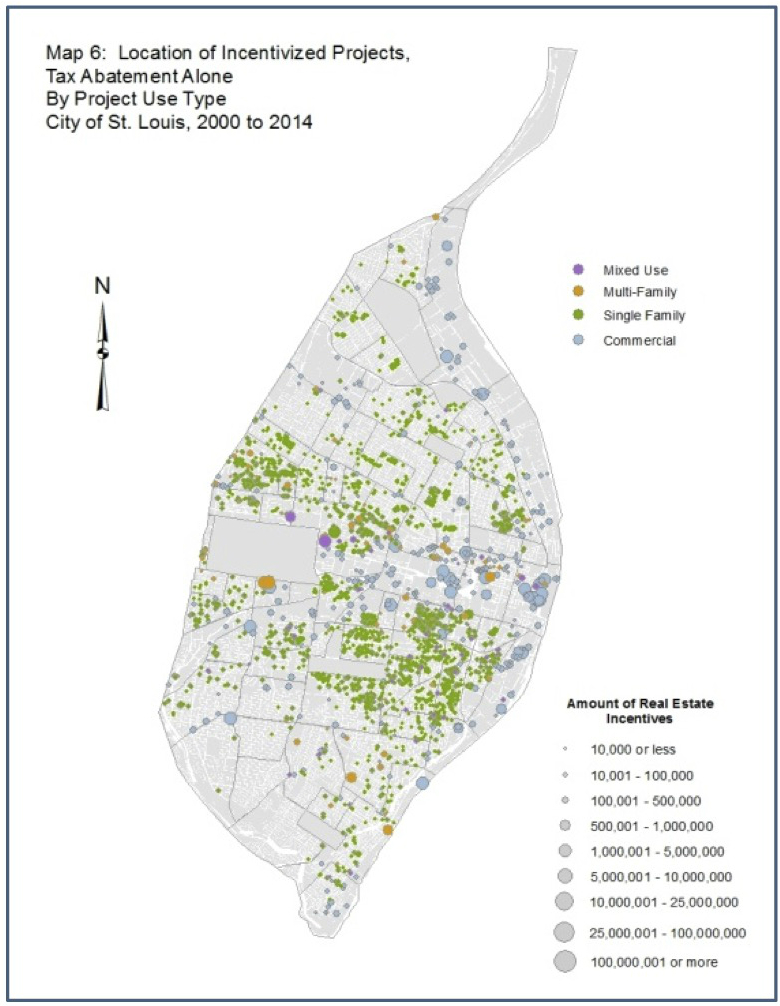 The report has been underreported, in our opinion, but has been widely acknowledged and the need for reform touted by virtually everyone in a position to effect change. But when will it come? The issue is beginning to feel like Congressional approval ratings – everyone hates Congress but likes their congressman. It would be more than shocking to see any real debate about this particular blighting, despite its size.

Again, the most benign reading of the use of “blighting” is as a simple economic tool. In this respect, the tool has been used for the largest of the large entities in the city: the NGA, Washington University in St. Louis, and so on. It streamlines the process by empowering a developer. It’s also used on the micro level for individual sites redeveloped by small enterprises. Blighting studies, presenting findings, considering evidence, city approval to send to the Board of Alderman, the board vote…it’s an industry in itself. But why not save some time and money and simply blight St. Louis City?