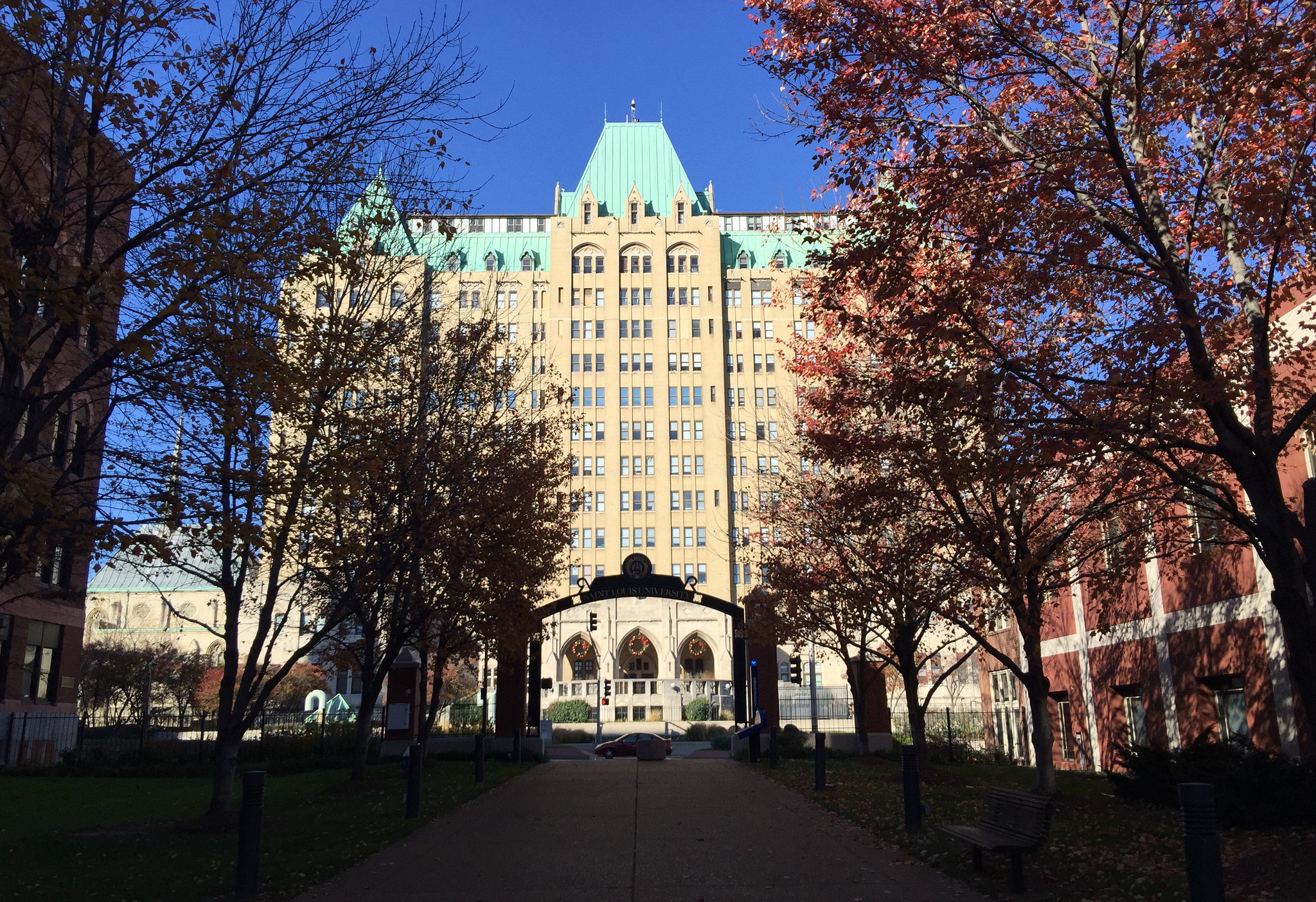 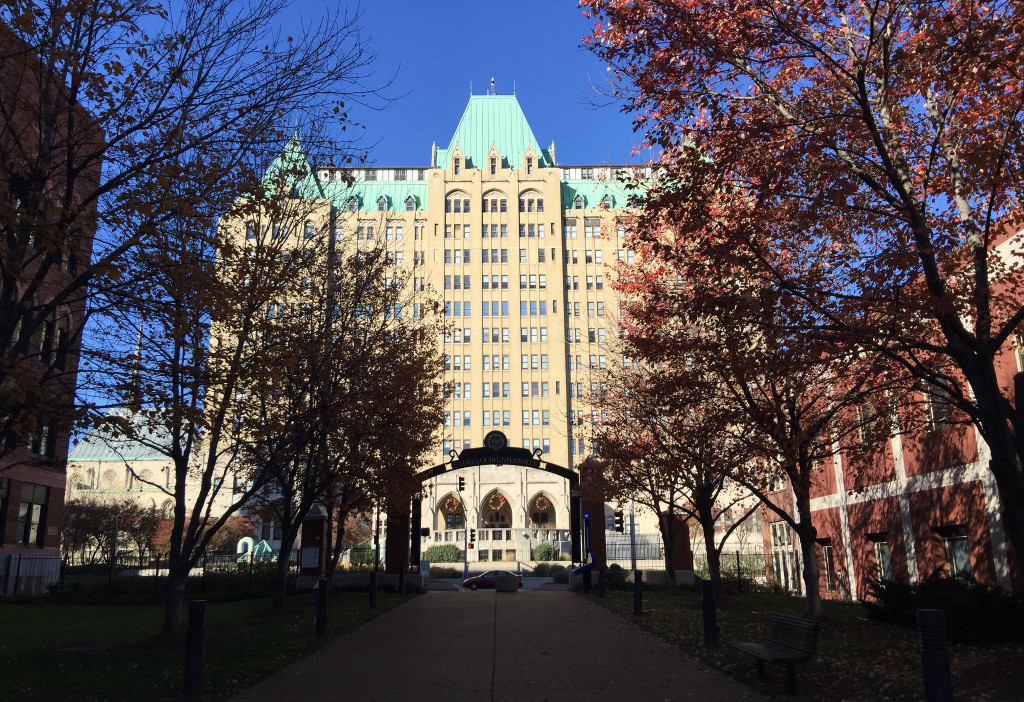 The Foundation for Commercial Philanthropy, a private foundation associated with the Desloge family has presented SSM Health with a proposal to preserve and re-use the historic Firmin Desloge Hospital Tower and Desloge Chapel.

In June of last year, we reported that SSM had reached a deal to purchase St. Louis University Hospital and was in the early stages of planning a $500M investment. The future of the skyline defining Desloge Tower was uncertain then, and remains unresolved as SSM has not made a commitment to retaining the building.

The proposal by the foundation asks SSM and SLU to consider the building to be repurposed as serve as the home for a new non-profit incubator. It even has a name, The Hive. The idea would be to provide start-up assistance and ongoing support for local nonprofit and charitable groups much as business incubators due for for-profit business – a non-profit version of Cortex, if you will.

The proposal itself argues for the preservation and reuse of the Desloge Tower for several purposes. Guest housing for SSM patient families, student housing for Saint Louis University Medical School students, or teaching or office space would occupy the building. Other ideas include senior living, childcare, and a museum dedicated to African Americans in healthcare. The proposal cites Homer G. Phillips hospital, and City Hospital as local examples of medical building reuse. The full proposal is below.

Earlier this year, SLU acquired the Missouri Belting building, the last parcel remaining between Chouteau Avenue and the existing hospital several blocks to the south, not owned by the university or SSM. A new hospital is expected to be constructed on land cleared adjacent to Desloge Tower. 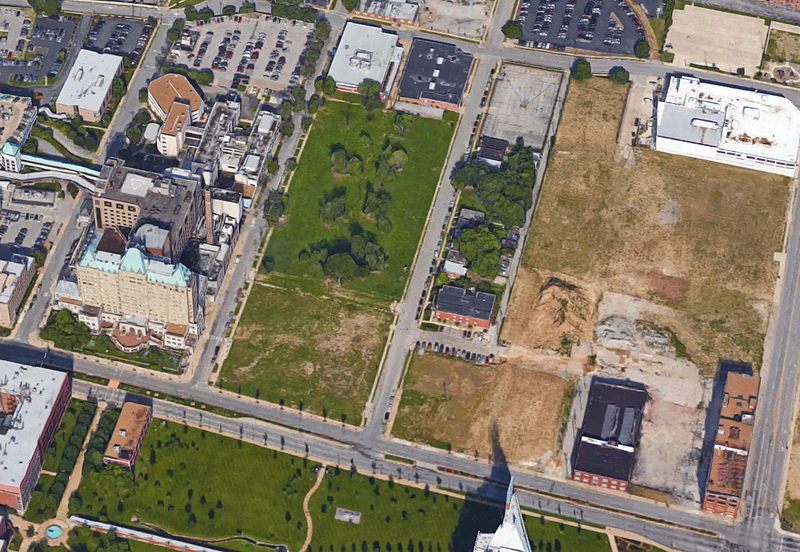 Desloge Tower served as the main hospital building of the Saint Louis University Medical Center until a reorganization in 1959 resulted in a new official name, SLU Hospital. Much of the currently modern campus is composed of structures constructed during a 1986 addition to Firmin Desloge Hospital. Michael Allen of the Preservation Research Office suggested the city would gain two new assets with a new medical center that featured a historic residential tower for employees and staff.

“I would hope that there could be consideration of saving the historic Firmin Desloge Hospital with its exceptional chapel by nationally-acclaimed architect Ralph Adams Cram.” Allen continued, “No one will cry if the ungainly addition is demolished and replaced — in fact it would improve the city’s skyline and the historic hospital building to be free from that dull form.”

The Foundation For Commercial Philanthropy (FCP) was launched in St. Louis earlier this year to help other nonprofit organizations strengthen their operations and fulfill their missions while simultaneously generating new funding for organizations dedicated to fighting homelessness and poverty. FCP offers cost-effective professional services to help a wide variety of nonprofit organizations to succeed while also utilizing business management and brokerage services to operate social enterprises and fund humanitarian work primarily benefitting women and children in homelessness and deep poverty.

Desloge Tower Proposal for Preservation and Reuse – The Foundation for Commercial Philanthropy by nextSTL.com