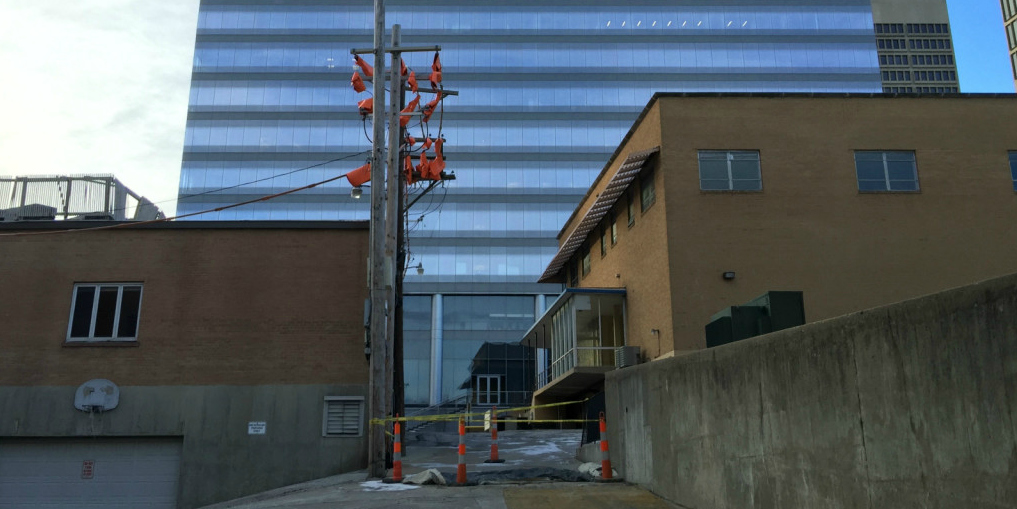 Pre-construction activity has started at the southeast corner of Hanley Road and Forsyth Boulevard in downtown Clayton. nextSTL has learned Fortune 500 healthcare company Centene is soon expected to break ground on a second tower and garage at its prominent parcel along the intersection.

According to nextSTL sources the second phase of expansion is expected to feature a boutique hotel, and possibly a skywalk across Hanley connecting towers I and II. Clayton-based Centene is expected to occupy up to 14 floors in the new building. The hotel, and mixed-use retail along with general office space is expected to fill the remaining space.

In October of 2014 nextSTL first reported Centene had agreed to terms with Gershman Commercial regarding three properties within the expected development zone. The bundle includes 12 S. Hanley, which was completed in 1958, 20 S. Hanley, constructed in 1960, and 7642 Forsyth, built in 1952. According to St. Louis County real estate records Hanley Forsyth LLC paid $14.2 million for the properties. nextSTL has also learned that pre-construction activity has begun for a separate project on the long vacant parcels east of the Centene project, bounded by Forest Park Parkway, Forsyth Boulevard, and South Lyle Avenue. Core sample drilling was completed this past week. The collection of nine parcels were purchased by Clayton Property Investment LLC in 2012 for $21M.

The eastern most parcel was the site of the unbuilt Trianon condominium proposal by Orchard Development Group in 2008. The 2010 Clayton master plan completed by Sasaki Associates found a lack of pedestrian scale development. Produced for the plan is a massing study showing how a built out eastern Carondelet Avenue may appear. While still in the planning stages, the size of the development could dwarf other recent Clayton projects. After walking away from the Ballpark Village project, and $78M in incentives from St. Louis City, Centene announced it would consider other locations, including moving its headquarters out of state. Then Clayton approved $22M in tax incentives. The company expanded its footprint within the county seat, building a $186M development that includes an 18-story office tower, 1,700-space parking garage and retail, including Cantina Laredo, Pastaria, Niche, and Kakao Chocolate at 7700 Forsyth. Space in the tower rents for $33/sq ft, the highest in the region. The tower was 98% leased in less than a year. The move jump started plans for development at the east end of Clayton’s central business district.

Centene is growing quickly and has more than 13,000 national employees. This includes approximately 2,000 in the St. Louis area. In 2000 Centene had 270 employees company-wide, with 45 in Clayton occupying 6,000 square feet of leased office space in the former Aragon Place Building at 771 Carondelet Ave. In 2003 the company bought the building for $12.6 million, and expanded into 60,000 sf of office space.

On July 2 of this past year it was announced that Centene would acquire Health Net for $6.8B. While the impact on the St. Louis headquarters is not yet known, the acquisition results in a much larger company, and one poised for growth. Centene currently services just more than 4M people across 22 states, primarily in subsidized health insurance programs serving low-income and disabled individuals. Health Net currently serves nearly 6M individuals via privately sponsored plans, Medicaid and Medicare. {existing buildings along Forsyth and Hanley will be demolished}

This past October Centene announced it would open an expanded claims processing facility in Ferguson, MO, adding up to 200 new jobs on an eight-acre site on Pershall Road. Additionally, the company has been very active leasing temporary office space in West St. Louis County.

In 2014 Centene signed 5.5-year leases for more than 100,000 sf of office space at Woodsmill Commons I and II, in Chesterfield. In July of 2015 nextSTL was first to report on Centene’s activity at Timberlake Corporate Center, also in Chesterfield. In August the company announced it had leased a 117,000 sf building at the corporate center.

The Plaza in Clayton ranks as that city’s tallest. The long-proposed Montgomery Tower, at 2 South Central, would be 33 stories with potentially more than 300 apartments if built. The under-construction 26-story 212 S. Meramec apartment building will add to the Clayton skyline as well. An attempt to reach Centene for comment was unsuccessful.