After something of a tortuous but not uncommon path so far, a proposed development in Richmond Heights that would replace a church and long vacant school should win approval at the city council’s February 1 meeting. Unsurprisingly, there is opposition. The local news site 40SouthNews has covered the play-by-play.

Planned now a 187-unit building with small retail at Dale Avenue and Boland Place. An original plan called for 207 units. The proposed development is exactly what was called for by a 2008 Richmond Heights land use study of Dale Avenue, which sites the 206-unit Kirkwood Station development in downtown Kirkwood as a model example.

The proposed development presents a nearly ideal bulwark for Dale Avenue and the surrounding homes against the sight and sounds of Interstate 64/highway 40. It also presents the right urban form to transition a neighborhood from single-family homes to larger community facilities and retail to the west.

Not only that, but the proposed development makes the adjacent park more safe, with more eyes on the park and more frequent users. And as is rarely the case, the development doesn’t displace one resident or remove one residence. It also introduces a neighborhood cafe for use by park goers and residents.

Sometimes a developer presents a take-it-or-leave-it proposal. Here, the project has been altered and revised several times based on community input. The building has been pulled back from Boland, the number of units reduced, and the top level set back to reduce massing. 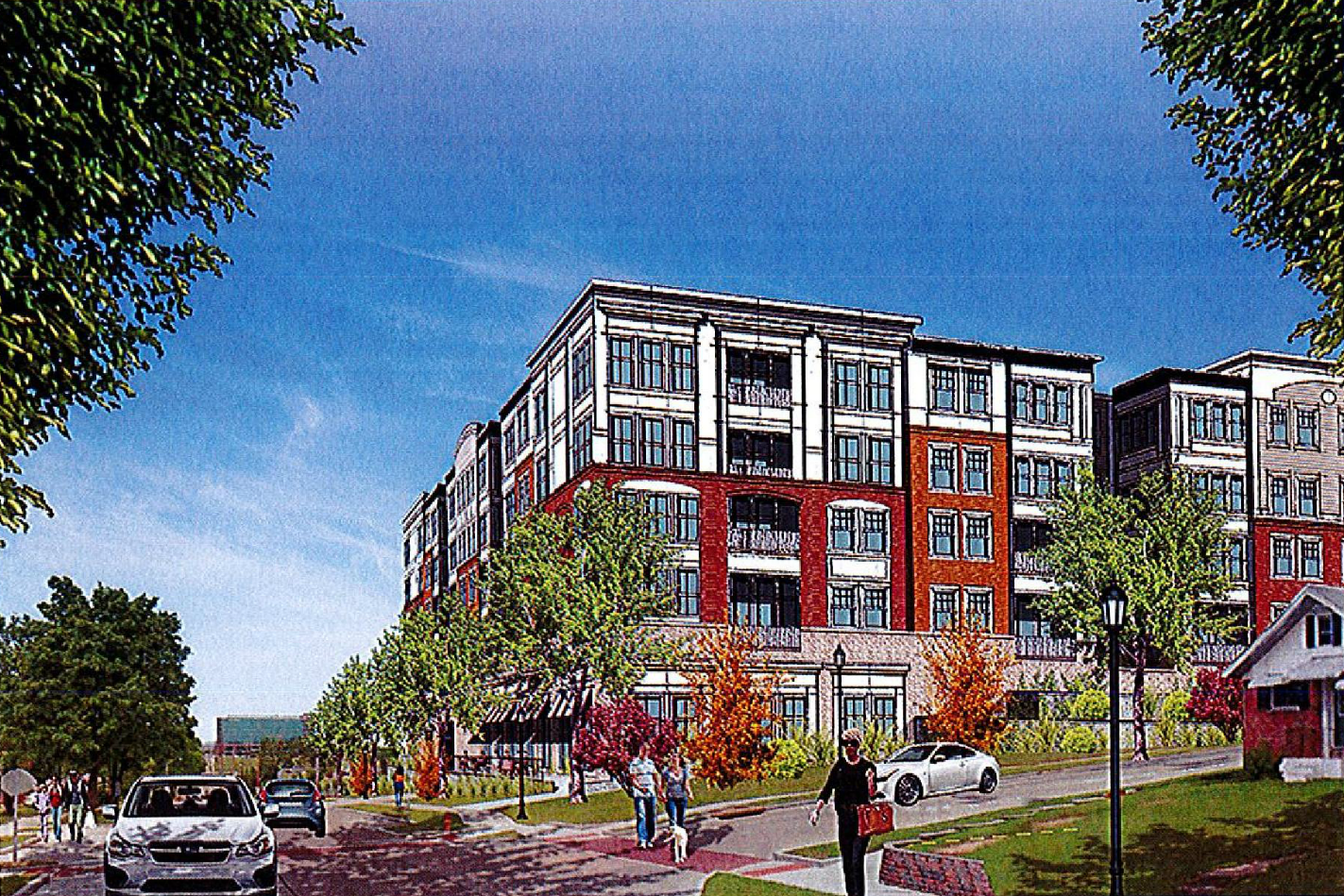 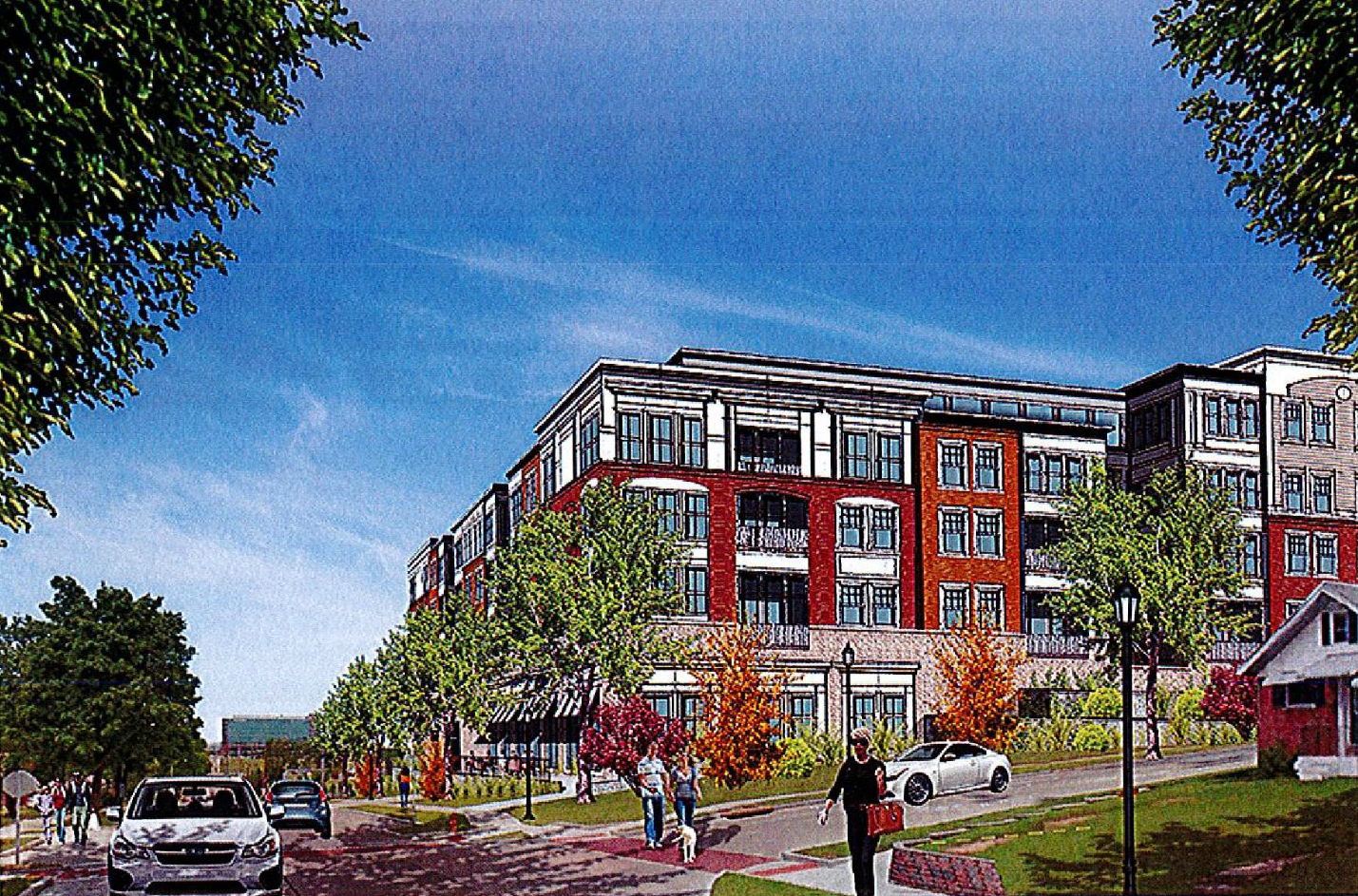 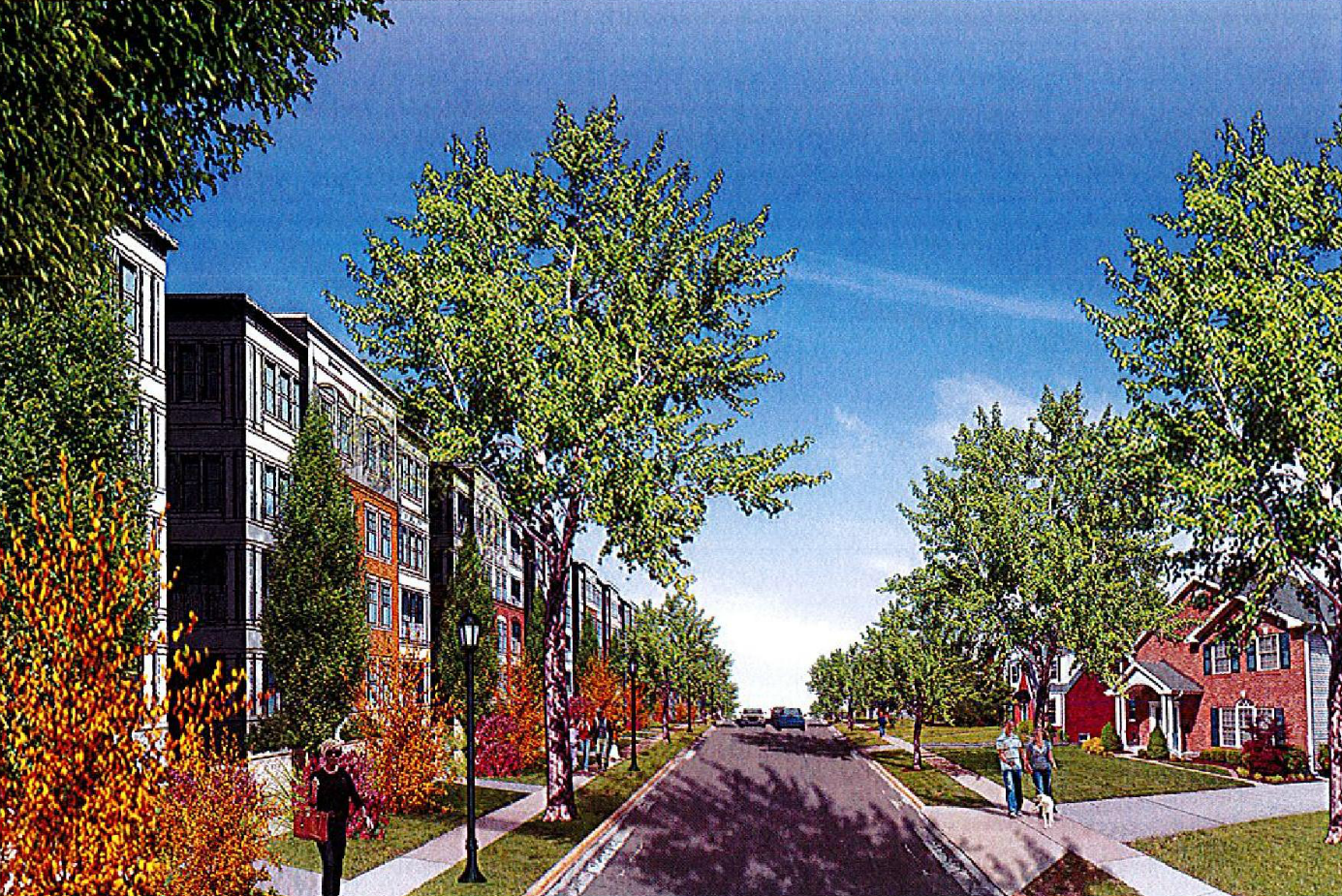 ▲ ORIGINAL: building presents a uniform height and mass along Boland 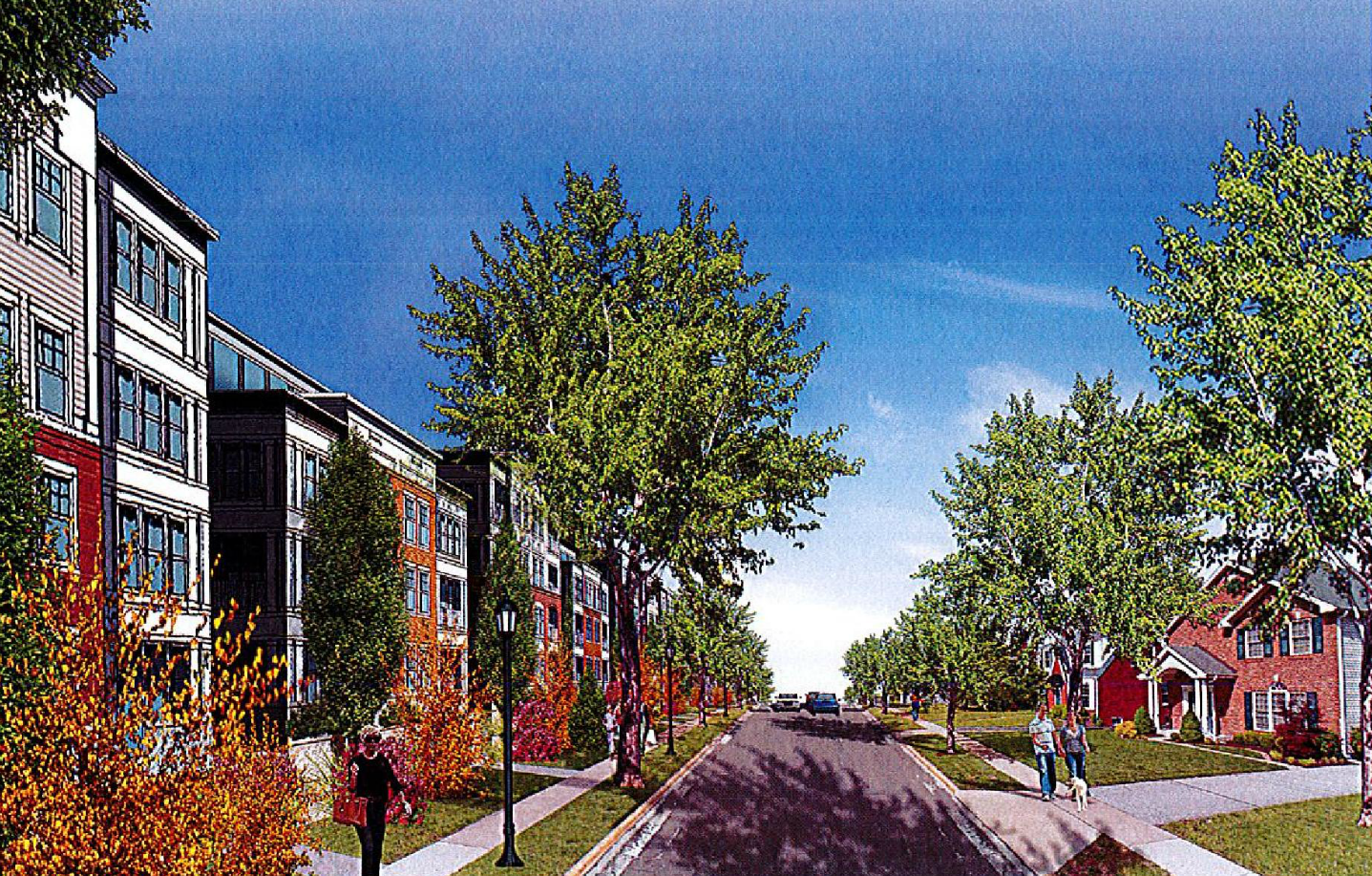 Now, the building is being set back further from the northern property line on Boland, adding more green space to the development. This is silly itself, as the apartments would sit on a block that is more than half parkland, but it’s another nod to opponents, and it would provide easy and attractive access to the park from the north.

It may be becoming a marketing cliche, but a project like this is targeting “renters by choice”. The high-amenity, professionally managed apartment complex is a thing, as we say. Projects such as Cortona at Forest Park confirm demand and show such developments are succeeding in St. Louis. Projects like this a “a thing” because fewer young professionals want to own a lawnmower, and retirees don’t want to own a home, and the responsibilities and costs that go with it.

{the building has been pulled back from the northern property line}

Opposition to a townhome development for a vacant school site in Clayton echoes some of these themes. Opponents in both places seem pleased enough with the status quo of vacancy and zero tax revenue from these properties. In Clayton, opponents want the school system to forgo several million dollars in revenue from the sale of the property, and the city to forgo half a million annually in new tax revenue. One can only assume that these same people would happily vote to raise their own property taxes to make up the difference.

While Clayton, as the county seat and business and residential center (though lacking significant retail) has a somewhat diversified revenue stream, Richmond Heights is a pyramid scheme of big box retail. At the moment it’s “winning”.

A new Menards home improvement store will soon siphon tax money from St. Louis area residents that may have otherwise gone to Maplewood via the nearby Lowes, or Brentwood via the Home Depot across the street. Oh, and Richmond Heights gave Menards $15M in the form of TIF for its trouble. The Galleria and Boulevard, which is set for a TIF subsidized phase II, bring in more.

These sales taxes, the majority of which are paid by non-Richmond Heights residents, keep Richmond Heights property taxes low and the level of services high. It’s a nice gig if you can manage it. And it may work for another decade or more if the city can continue to take from its neighbors. But it’s not smart. Richmond Heights has been losing residents for decades as its bet on big box retail took hold. Neighborhoods (not the nice ones of course) were demolished for national chain stores.

The project at 1301-1325 Boland Place would replace the existing Richmond Heights Church of God in Christ, and the adjacent long vacant school building which has been on the market for years. The school itself is small, just two stories, and not eligible for historic tax credits like some historic St. Louis City school buildings which have become apartments.

Since the school closed, the city purchased the adjacent fields and have repurposed them for public use. The park includes a multi-use baseball, soccer, football field, playground, and basketball and tennis courts with lighting for nighttime use. 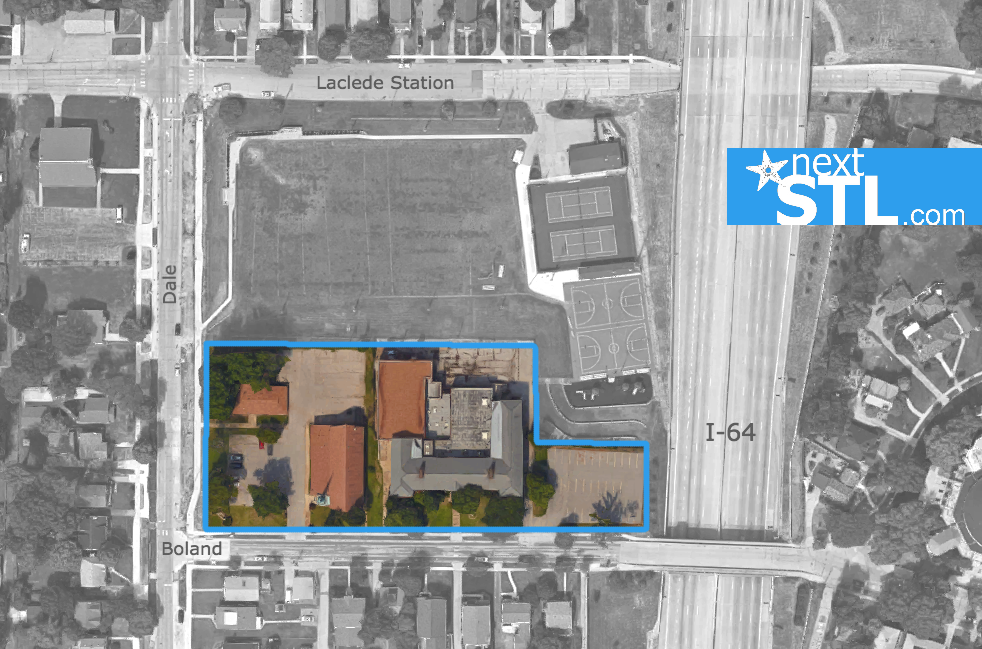 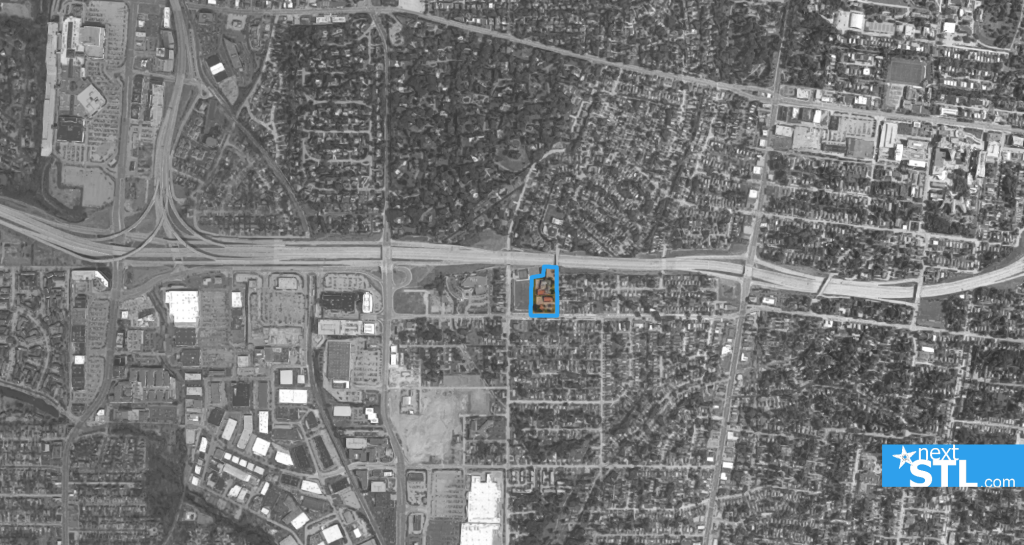 Opponents have argued that the proposed development is too big, would bring too much traffic, and runs afoul of several zoning guidelines. The proposal would introduce more than 1 residential unit per 500sf of land, include four units less than 600sf, the set back roofline would exceed the recommended height by a couple feet, and there would be 1.8 parking spaces per unit instead of 2.

If you’re against a development, this is the type of detail you latch onto. The residential density doesn’t take into account the large adjacent park, the total of four sub-600sf units are guest units for resident’s visitors, the exceeded height occurs where there’s significant land slope, and parking? Well, the parking issue is ridiculous. Other nearby developments, and surrounding municipalities have lower requirements.

The final opponent boogeyman is of course traffic. While the vacant school and church do not generate much traffic, their former uses certainly did. Re-zoning as multi-family is a down-zoning in this respect. Not to mention a traffic study showed the development adding about one car per minute to surrounding streets. But studies and numbers don’t matter if you’re against something.

At next week’s meeting, opponents hope to force the Richmond Heights city council to produce a super majority in order for this development to proceed. They’re expected to deliver a petition that would require such a vote. The best case scenario is that a super majority vote is forced, and passes. What a great way for the City of Richmond Heights to reaffirm its desire to turn long vacant land into new residences for new residents and loudly, again, show that it’s serious about developing Dale Avenue. 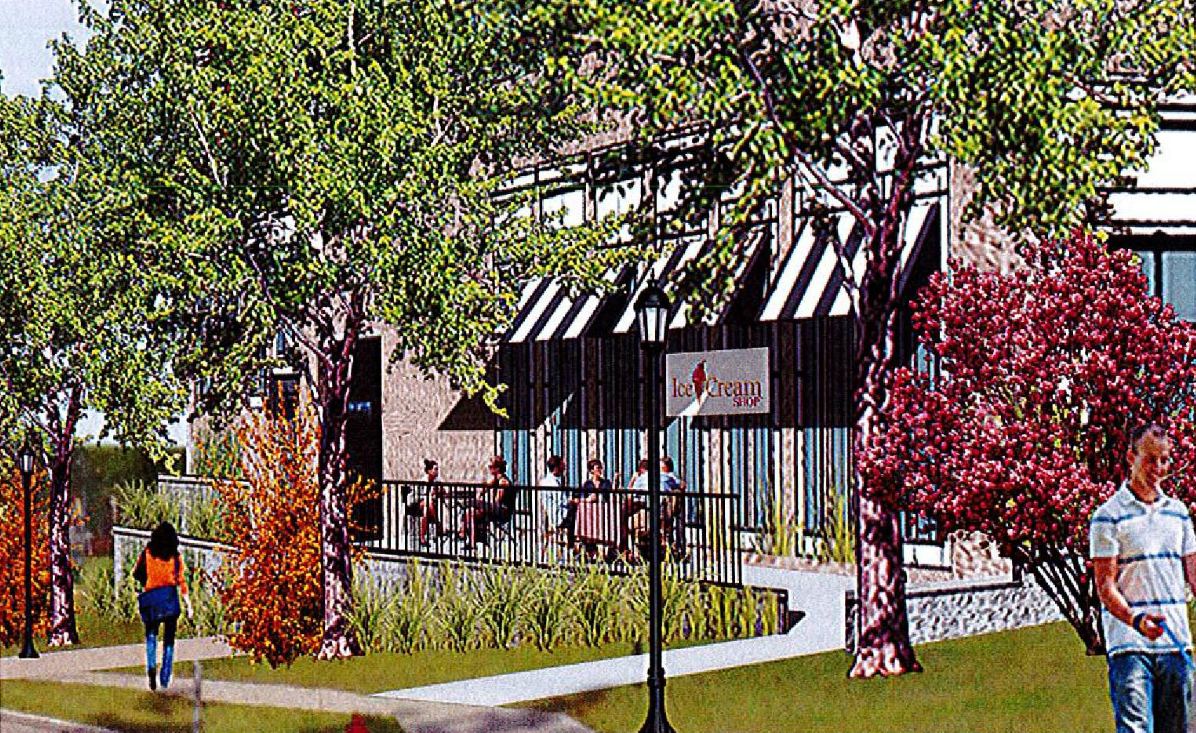 {the development would introduce a cafe/deli space}

▼ REVISED: fourth floor plan shows setbacks and the change at the north end (at right)