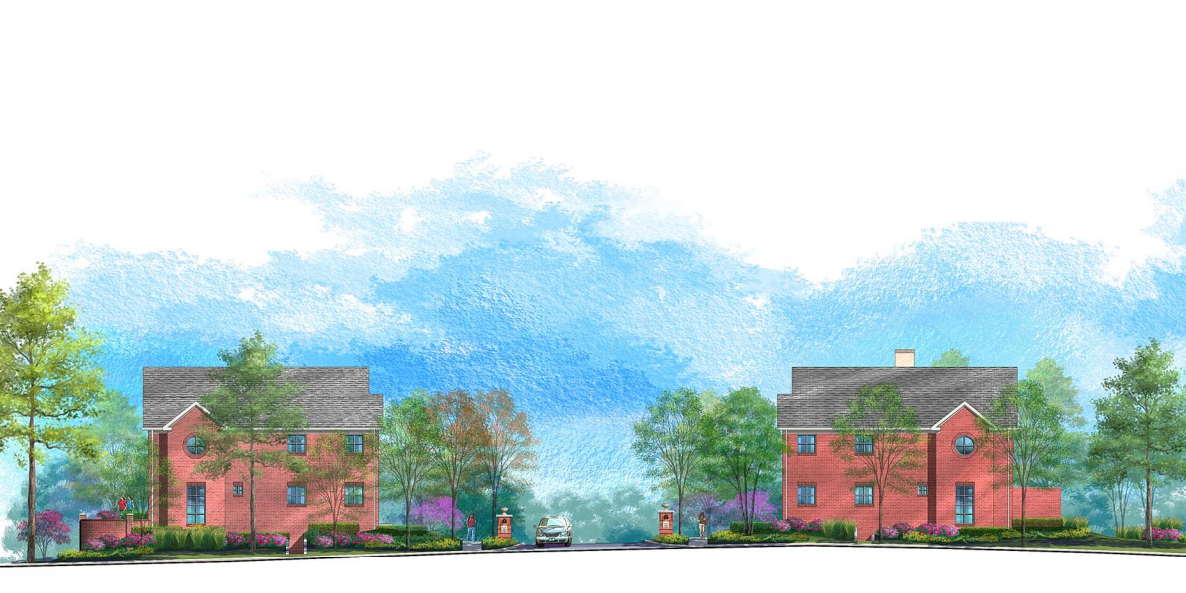 The Clayton City Plan Commission & Architectural Review Board recommended the city’s Plan Commission approve the project at a meeting Tuesday. The commission instead recommended by a vote of 6-1 that the Clayton Board of Alderman reject the requested rezoning. The vote likely ends the effort to build townhomes at the long vacant school site. The latest iteration of the development plan is below. It would have placed six single-family homes across from existing single-family homes, and 25 townhomes facing a surface parking lot and parking garage owned by Washington University in St. Louis.

In short, a small number of immediate neighbors continued to demand that only single-family homes are appropriate for the vacant school site, which sits about a quarter-mile from the Forsyth MetroLink station and adjacent to parcels abutting Forsyth zoned as central business district. The outcome likely means only single-family homes development will occur here. If the school is demolished, approximately 14 lots could accommodate development.

New construction homes in the area routinely list for near $2M. The townhomes were to be priced at $700K and up. The Clayton school system will now need to sell for less than the contract price for the townhome development. With perhaps 14 homes, fewer new residents will be added, resulting in fewer people living near the region’s big transit investment, fewer people to support local businesses, and fewer people walking the neighborhood and adding to the area’s safety.

A plan to demolish the long vacant Maryland School and build townhomes in Clayton appears to be moving forward following significant changes made to accommodate neighbor concerns. The once 45-unit project had been trimmed to 36, and would now count 25 units built on the southern portion of the original project site.

The $11M project would include 50 underground parking spaces and 20 private on-street parking places on the new School Lane. Some brick and limestone elements of the existing school would be salvaged and repurposed as ornamental elements. The townhomes range from 2,200 to 2,600sf.

The 3-acre site was declared surplus property by the Clayton school district in 2009 and put on the market. The existing school building, which last served as a public elementary school in 1980, then as a private school for several years.

The revised site plan leaves six single-family zoned lots fronting Westmoreland Avenue at the north of the school property. These would be sold as single-family detached home lots. Neighbors along Westmoreland have long opposed the proposed larger townhome development as being disruptive to the character of the neighborhood and eliminating green space.

The initial development proposal had townhomes facing Westmoreland. The first downsized revision oriented the rear of the townhomes to the street with landscaping in hopes of minimizing the visual impact. The most recent new construction single family home on the street sold for $1.2M in 2014. The teardown for that home sold for $365K. I have written in favor of the increased density this development would bring to Clayton. As the wealthiest inner ring suburb in St. Louis, the city strangely has acres of vacant land and surface parking in and around its central business district. The 45-unit development would have introduced welcome density to support local businesses and add to a more activated community.

The new plan will add residents, but is substantially worse than past plans in one important respect. Instead of front doors facing Maryland, a somewhat forgotten street, yet one that is destined to development to the south, the rear of townhomes, perhaps a fence and some shrubs will appear. Clayton will have an alleyway instead of a street.

Unfortunately, it’s unlikely anyone will raise a fuss about poor urban design as that’s never been the crux of opposition to this development. With single-family detached homes slated for Westmoreland, the plan is likely to win approval. The Ittner designed school did not receive market interest in residential conversion, and the relative density would in all likelihood been opposed by neighbors.

The revised application for rezoning was received by Clayton December 23. A public meeting date has not been set. The property is under contact for an undisclosed price to Love Investment Company, which is working with Higginbotham Custom Homes as the developer. The project is not seeking development incentives such as TIF or tax abatement.

As we previously wrote, ultimately Clayton must diversity its housing stock and increase density where it makes sense to support retail and commercial development. Projects like Maryland Walk, The Crescent, The Plaza in Clayton Residences, and the proposed Montgomery Bank tower and The Crossing are positive steps forward.

The Maryland School townhome developer believes what Clayton’s missing is something between high-rise apartments and condos and single-family homes. The market is moving toward that model, with retirees, empty nesters, and families increasingly prioritizing lower maintenance options nearer restaurants, transit, and other activities.

Clayton, and its residents are far from economically distressed, but that doesn’t mean the city is immune to economic and demographic changes. Clearly retail development has lagged and stagnated, and therefor so has sales tax revenue. The city can boast one of the most expensive office rent streets in the country, but still faces challenges. These problems aren’t going away, and Clayton has a lot to lose, whether it’s aware of this, or not.