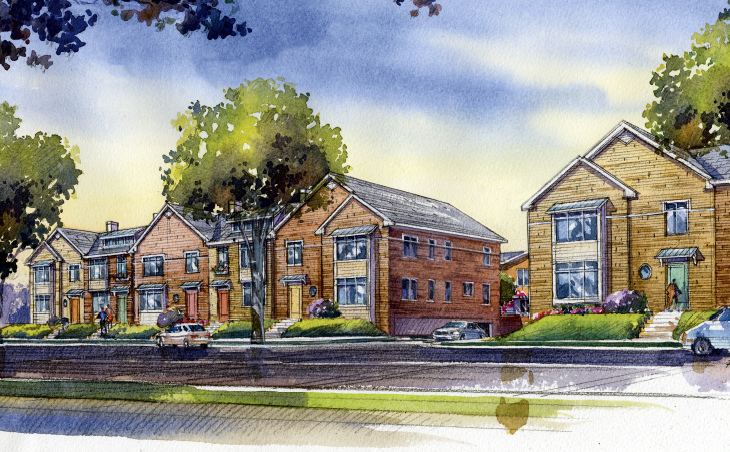 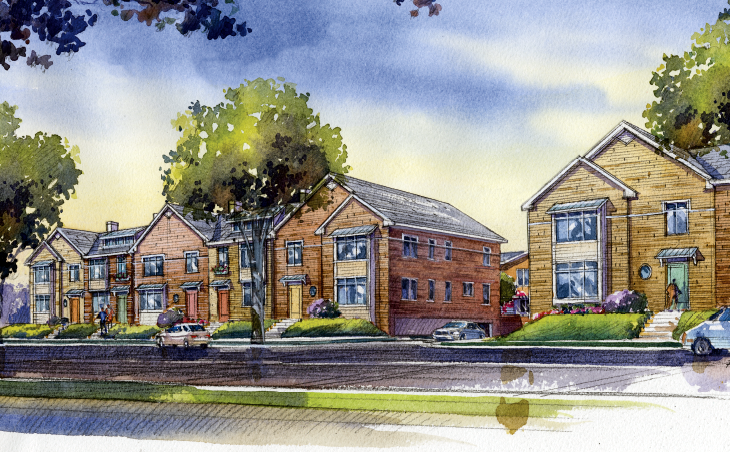 The plan to replace the long closed Maryland School in Clayton with 45 luxury town homes has a new look. Renderings by developer Higginbotham Custom Homes and Renovation reveal just how the site might be remade. The three acre site was declared surplus property by the school district in 2009 and was put on the market. After receiving multiple offers, the Clayton school district entered into a contract to sell the property to Love Investment Company, which is working with Higginbotham as the developer, at the end of January of this year.

Gyo Obata is serving as the project architect. The “O” in HOK, Gyo co-founded that firm in St. Louis in 1955 and designed countless notable buildings around the world. The developer expects the project to produce $450,000 in new annual tax revenue for Clayton. The project must still win approval from the city’s planning and architectural review commissions and the Board of Aldermen. The property is currently zoned for “Nursery, Primary, Secondary Education” and would require rezoning. 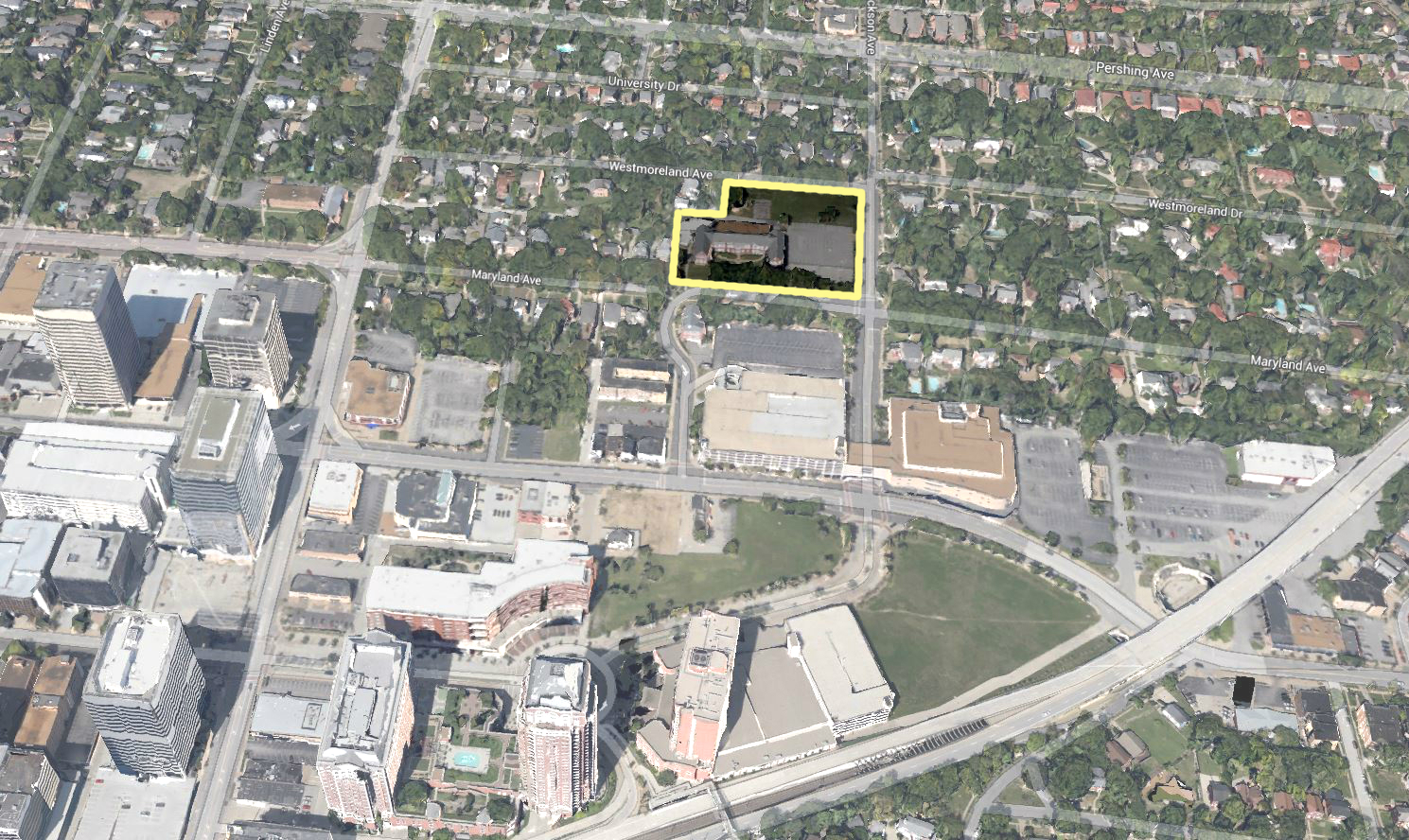 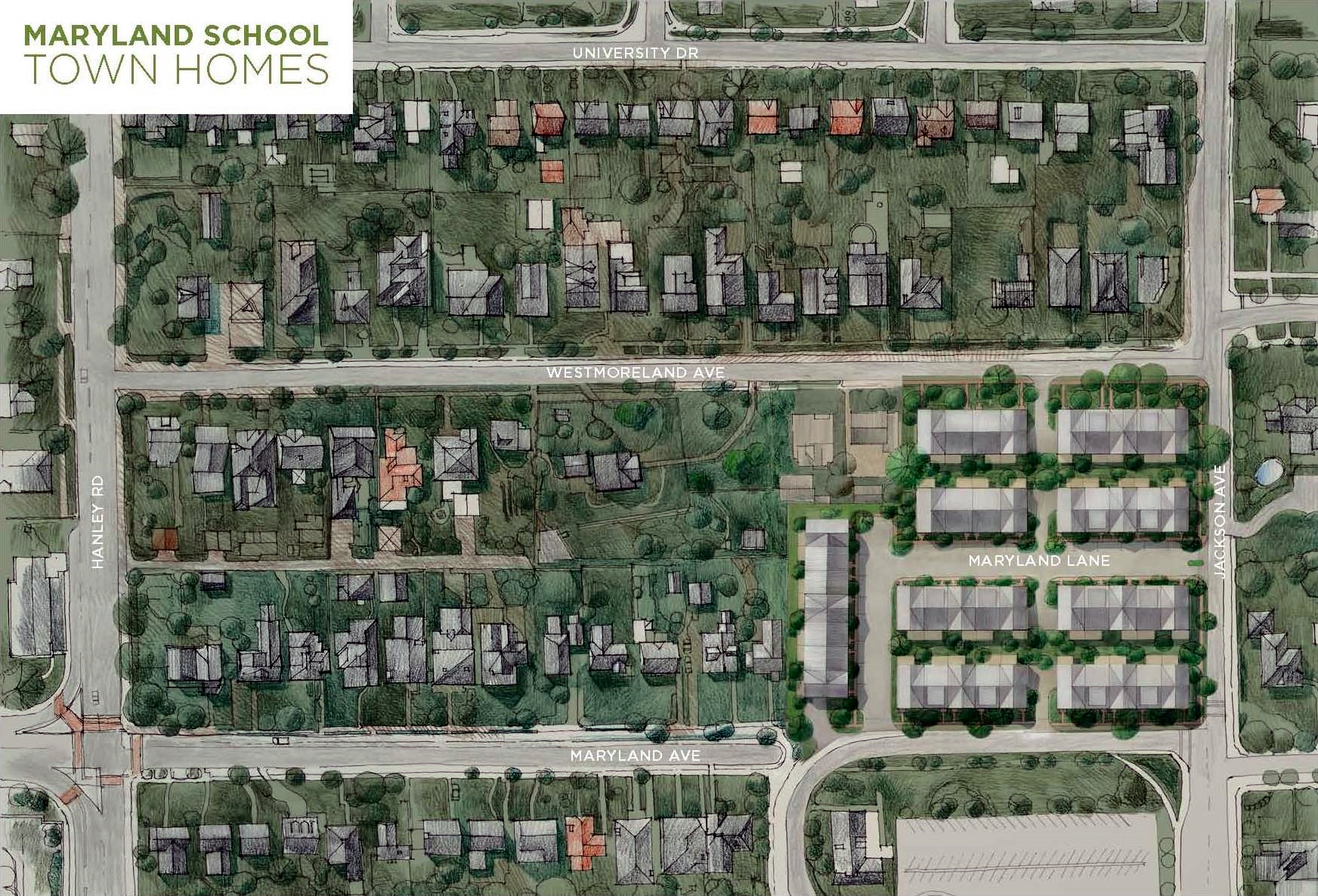 Despite objections from neighbors who have used the school’s greenspace as a park for years, the project appears ready to move forward and add much needed residential density to Clayton. A year ago, I wrote “What’s Wrong With Clayton? That’s Easy, but Does Clayton Care?” That article focused on the lack of retail and how downtown Clayton is dominated by four and five lane streets (they should be narrowed), built primarily to get commuters into and out of town quickly. The the other half of building a place for people is actually adding people.

Today, walking downtown Clayton is an amazing and dreadful experience in contrast. Here and there restaurants and bars are packed (check out the 2 1/2 hour wait at Pastaria every Friday), but in between are dark office windows set back on raised plazas, curb cuts for yet another parking garage, and virtually zero activity on the sidewalk. Everyone drives (hey, garage parking at Pastaria is free). Worse yet is the incredible number of vacant lots and empty storefronts on the east side of downtown.

Downtown Clayton was once a retail hub. Prior to Famous Barr moving to the newly built Galleria Mall in the 1990s, this was a shopping destination. With retail having moved west and along nearby Interstates, Clayton must change. Residents, visitors and elected officials see this and know that Clayton needs more residents. And yet what are the complaints heard about the proposed development?

Opponents say they are against “high density housing” and concerned about parking and traffic issues. The proposal is clearly higher-density than surrounding uses, but is far from introducing a new form that would disrupt the existing residential context. A traffic study was requested and will be conducted, but it’s inconceivable that 45 luxury town homes will overburden the overly wide Jackson Avenue, or other streets, or generate more traffic than did the building’s use as a school. Of course Clayton recently required a $13,000 traffic study for a proposed grocery store to occupy a former grocery store (that building’s been vacant for a decade). 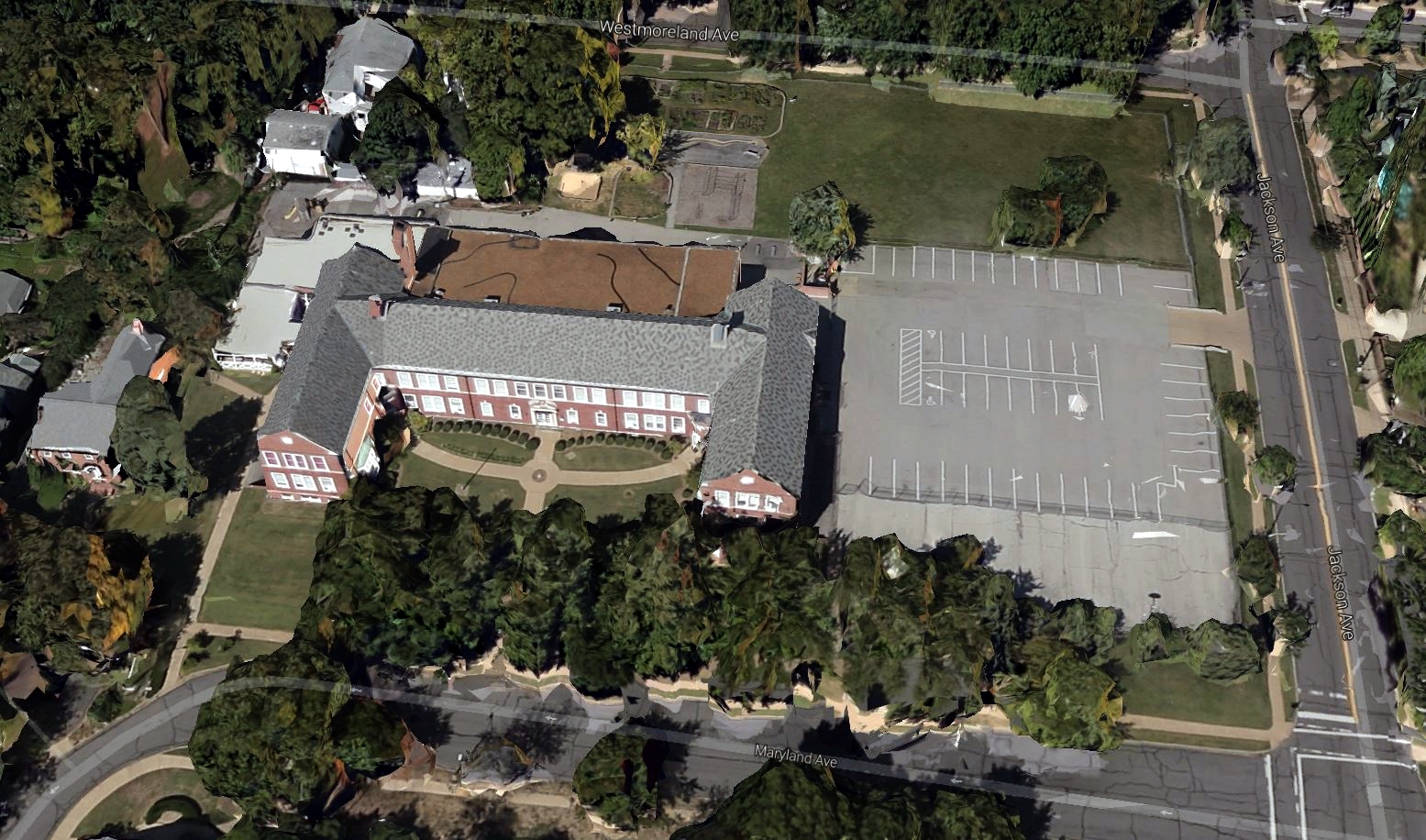 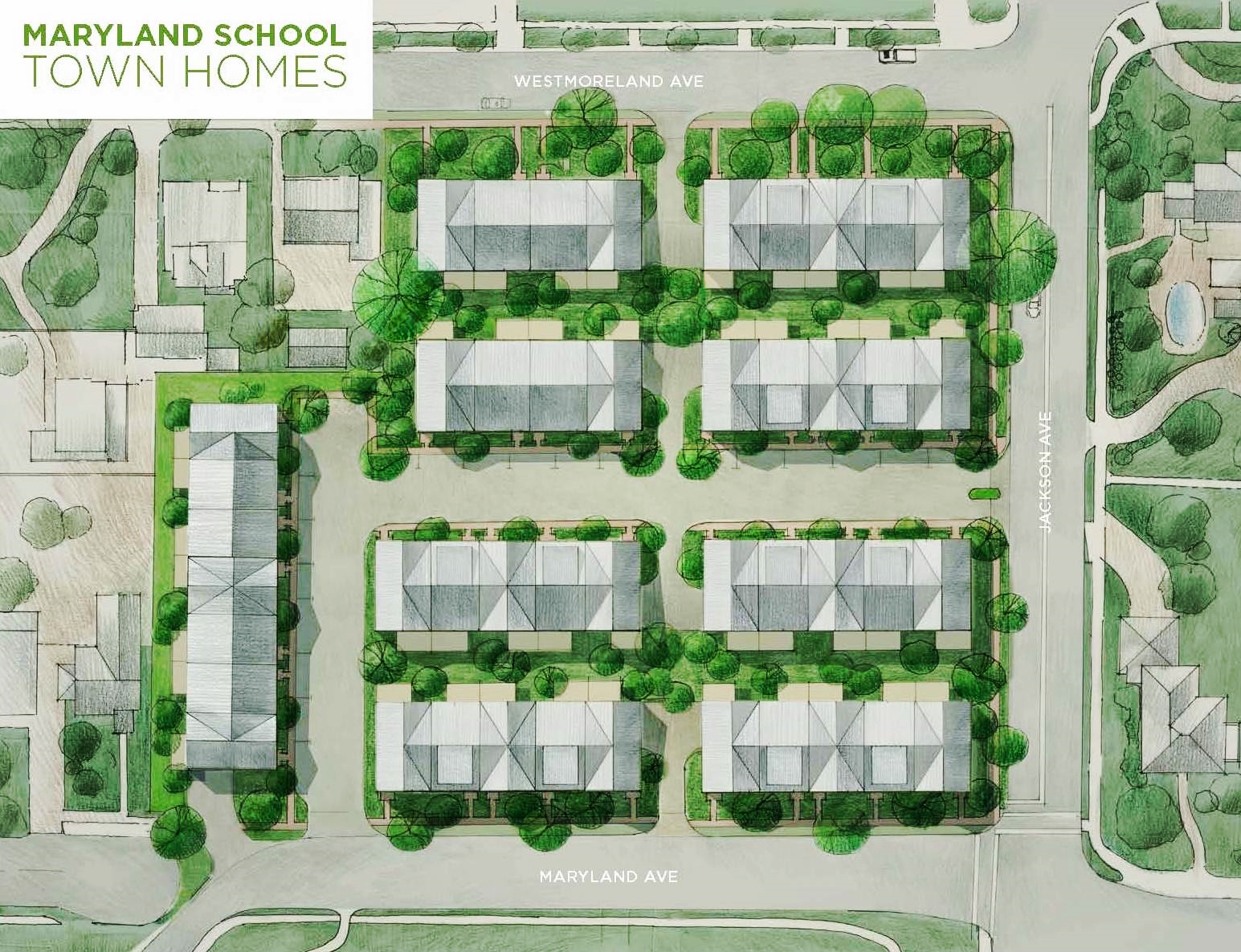 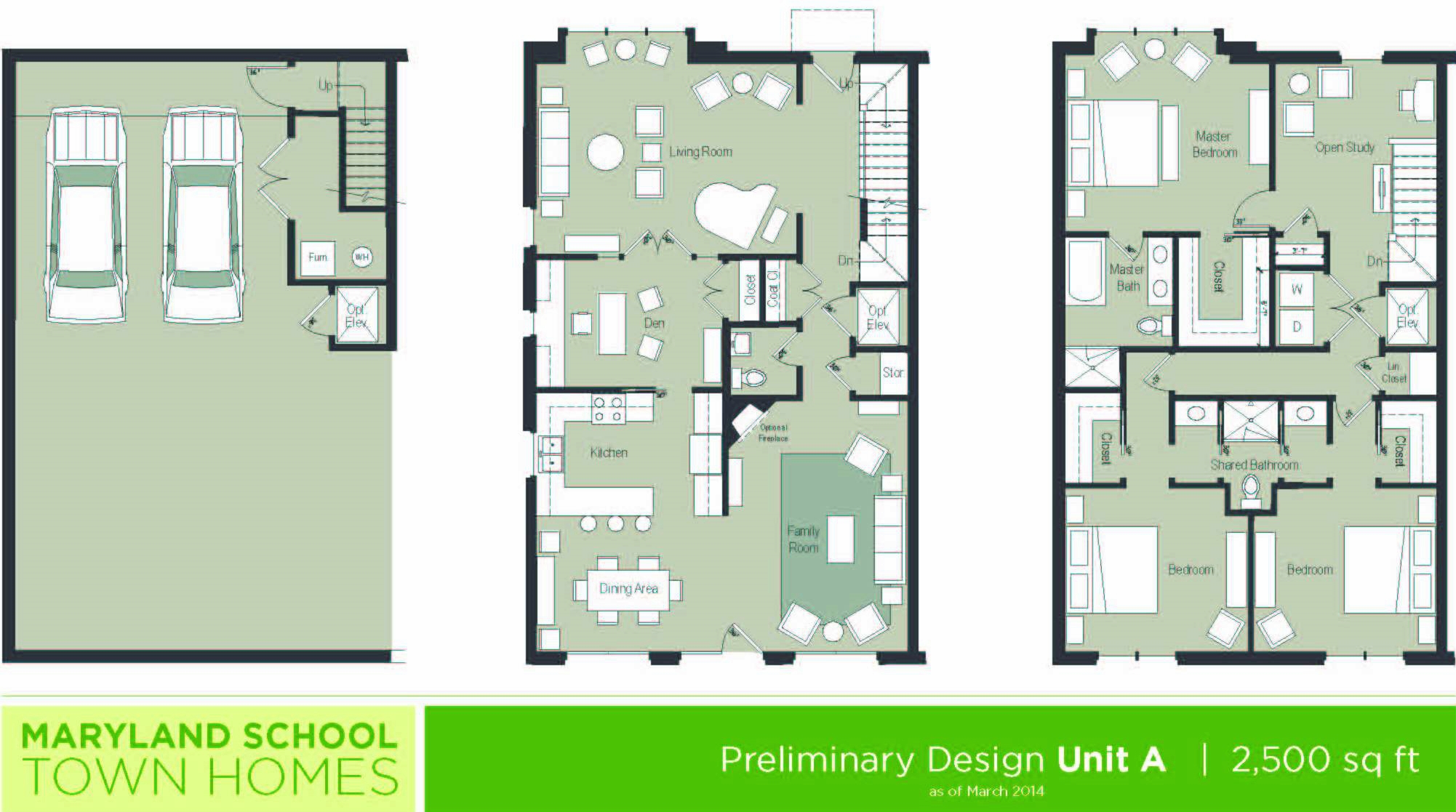 The 45 proposed town homes would average approximately 2,300 sf and carry a listing price of about $750K. Each unit would include two underground parking spaces. One curb cut serving nine units would be added to Westmoreland Avenue where there are now none on the south side (there are four across the street, one for each existing single family home). The current parking lot entrance on Jackson would be maintained, and serve 18 units. Three new curb cuts would be introduced on Maryland where there are currently no residences or businesses. That street would remain closed to westbound traffic.

Ultimately, Clayton must diversity its housing stock and increase density where it makes sense, to support retail and commercial development. Projects like Maryland Walk, The Crescent, The Plaza in Clayton Residences, and the proposed Montgomery Bank tower and The Crossing are positive steps forward. Higginbotham believes what Clayton’s missing is something between high-rise apartments and condos and single-family homes. The market is moving toward them, with retirees, empty nesters, and families increasingly passing on the one acre+ yard for lower maintenance options nearer restaurants, transit, and other activities.

Clayton, and its residents are far from economically distressed, but that doesn’t mean the city is immune to economic and demographic changes. Clearly retail development has lagged and stagnated, and therefor so has sales tax revenue. The city can boast one of the most expensive office rent streets in the country, but can’t find a way to build next to a transit station. These problems aren’t going away, and Clayton has a lot to lose, whether it’s aware of this, or not. 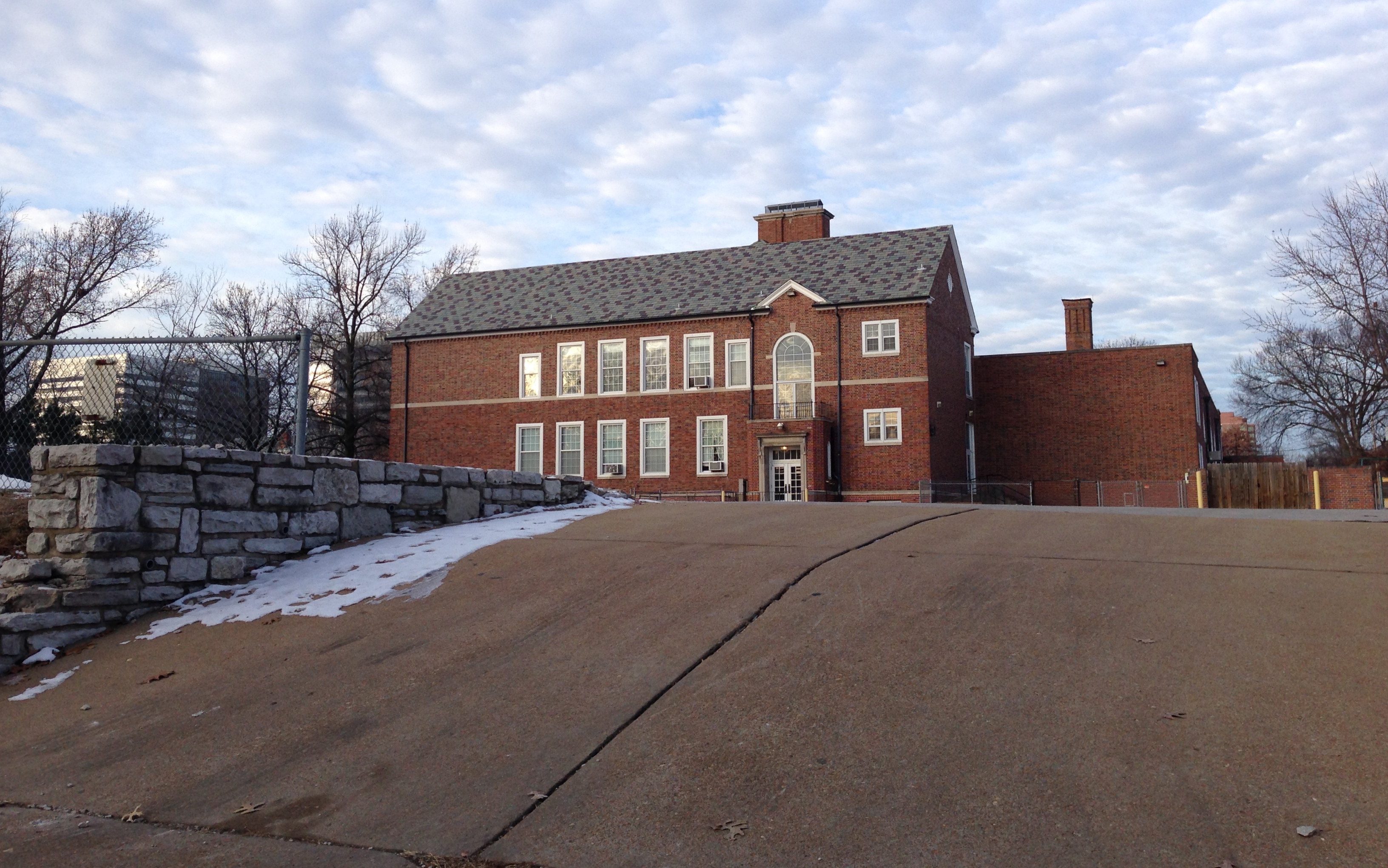 Maryland School closed in 1980 and has been used by the Clayton school district for various purposes since, including as temporary classroom space while other schools underwent renovation. For those interested, there is a Facebook group for those who attended the elementary school. The private Clayton Academy occupied the school for many years after it closed as a public school. The private Wilson School in the nearby Demun neighborhood of Clayton used the school for several weeks after a fire damaged their building in March 2012. The school district sold a much smaller office building across Maryland Avenue to the private early childhood education Goodvibe School.