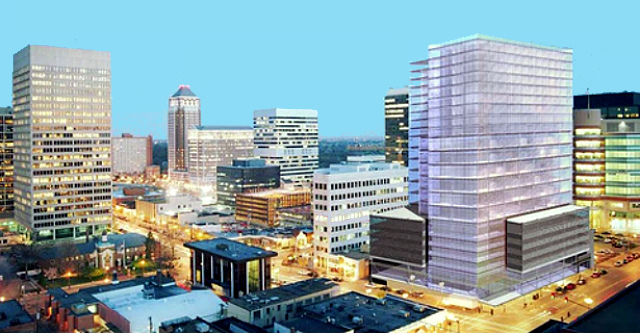 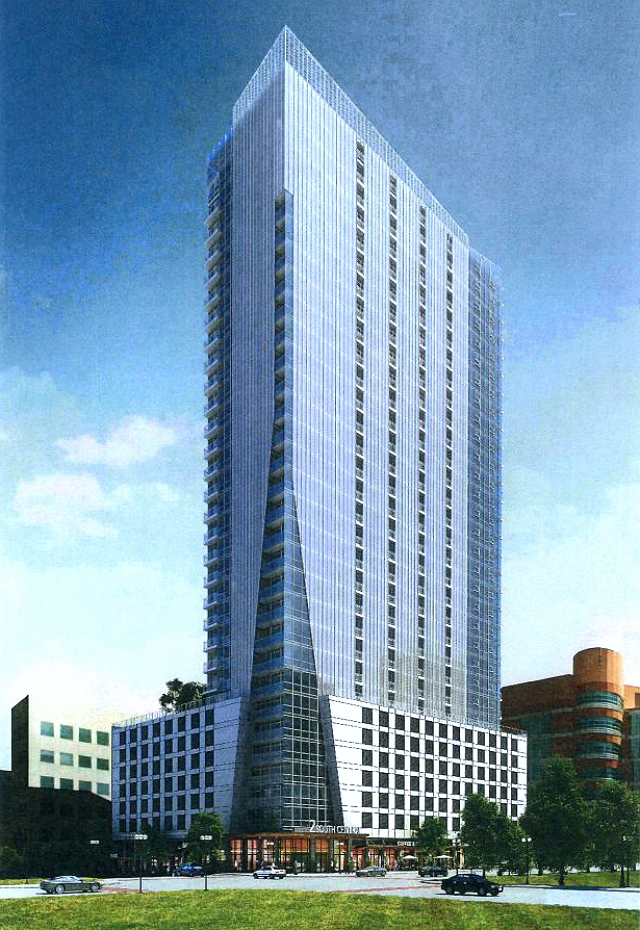 Montgomery Development has released a new rendering of their renewed project first reported by nextSTL (below). The rendering shows a 33-story building with street level retail and up to six levels of parking. The development is planned for 345 residential units, a 478-space parking garage, and nearly 13,000sf of retail.

Architect Humphreys & Partners designed Cortona at Forest Park as well as the One Light tower in Kansas City’s Power & Light district, a building that bears some similarities to what they’ve titled 2 South Central in Clayton. 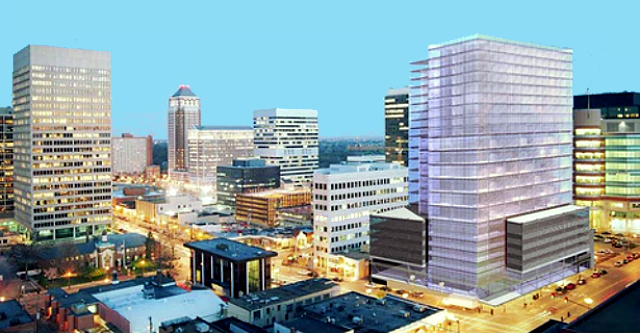 {though this rendering dates from 2007, the project may move forward in 2014}

WhoLou has learned that the long anticipated Montgomery family Clayton apartment tower development has picked up speed very recently after having been stalled for the past half decade. The project would call for the demolition of several buildings that house some longtime Clayton businesses including World News at the corner of South Central Ave. and Forsyth Blvd. World News has been operating out of the building since the 1960s, and has been a local favorite for nearly as long. It is the go to place in town for domestic and international daily and Sunday newspapers. World News also sells groceries and carries more than 2,500 magazines. The family of World News co-owner Ann Pointer sold the building to Montgomery in 2006.

According to Joel Montgomery Jr. of Webster Groves-based Montgomery Development, “We feel that market conditions in Clayton are currently favorable and may support a high-quality apartment tower. Our development team is preparing conceptual plans to review with city and county officials within the next 30 to 45 days.” The Montgomery family and Montgomery Development is developing this project independent of Montgomery Bank, which the family owns. Montgomery Bank bought the 6,544 sq ft building that World News operates out of for $1.75 million in 2006 according to the St. Louis County Assessor’s Office website.

{the building housing World News, and adjacent buildings would be demolished}

The Montgomery family now owns more than 30,000 sq ft of property within the development zone. Approximately 20% of the property within the development site along South central Ave. is owned by Montgomery Bank. 2007 plans called for a $100 million 25 to 30-story residential and office tower featuring a 4,000 sq ft Montgomery Bank branch on the first floor along with some other retail tenants. Additionally, the county intended to trade the 54,600 sq ft parking lot at South Central Ave. and Carondelet Ave. across the street from the Buzz Westfall Justice Center in exchange for 55,000 sq ft of office space in the proposed development.

Montgomery Jr. commented, “Assuming they (city and county) determine that the project we are envisioning is appropriate for Clayton, we will seek construction cost pricing from qualified general contractors and prepare detailed pro forma projections. While we are early in our evaluation process and require many levels of approval, we are cautiously optimistic that we could move forward in 2014.” The development site would also need to be rezoned. Montgomery Development also developed the 8-acre Des Peres Pointe shopping center approximately one mile west of I-270 and Manchester Rd. The center is anchored by a Trader Joe’s specialty grocery store.

Montgomery Bank is based in Sikeston, MO. It was established in 1934, and has been family-owned since 1957. With over $900 million in assets it is the 26th largest bank in the state of Missouri. It is also the 744th largest bank in the nation. According to DepositAccounts.com as of September of 2013, Montgomery Bank had 207 employees at 11 locations throughout the state.