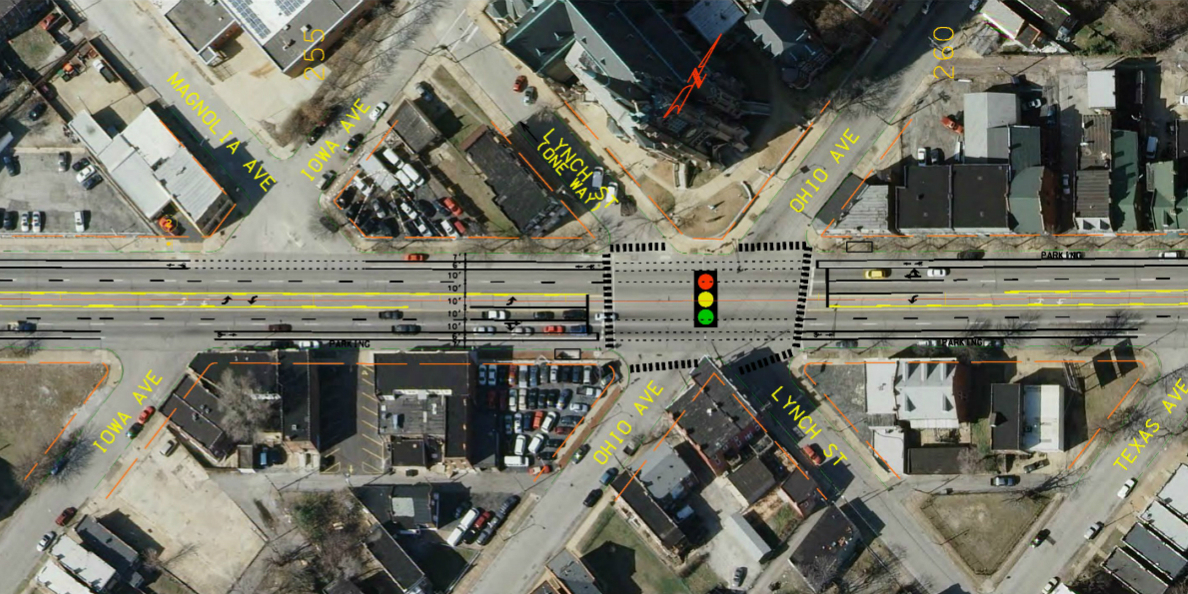 Tonight the Missouri Department of Transportation is holding an open house to share its latest plans for Gravois Avenue through the City of St. Louis. Back in April of last year we reported plans to vacate portions of 16 streets along the city’s major south side arterial road. The project is now moving ahead with no street closures as a result of resident feedback [provide feedback to MoDOT online].

While much of the project is planned, feedback is needed on striping and signals, including bicycle lanes, proposed road diet, and more. Below is an image of the entire Gravois plan, from River Des Peres at the southern border of the city to I-44 just south of downtown. You can scroll down the image to view project details.

So what’s in the plan, and what feedback would we offer?

Gravois will be resurfaced from the city limits to I-44. Signals at many intersections (see list below) will be replaced. A road diet (lane reduction) would occur from Christy to Chippewa, where the street would go from four traffic lanes to three including a center turn lane. Lanes would be reduced from Jefferson to I-55 as well, where the configuration would go from six traffic lanes to four and a center turn lane. This means that the current Chippewa to Jefferson lane configuration would remain as-is.

Along Gravois, lane widths would be standardized to 10′ for traffic and turn lanes. Parking would be 7′ along the corridor, and bike lanes would be 6′. {Jefferson to I-44 – parking/bike/traffic/traffic/turn lane}

Most, nearly all, intersections are getting property piano key crosswalks (below), more prominent than the current single stripes used now. Bike lanes are added, but crucially absent from Chippewa to Grand, leaving a bit of a question as to where cyclists will go. Plans show the bike lane at the north project terminus continuing through the I-44 interchange mess. Here, cyclists should be directed onto Russell to Broadway where existing bike lanes exist, instead of continuing north across possibly to the least hospitable cycling road in the city.

Options will be presented for Jefferson and Christy. The choice in both cases is a between 10′ traffic lanes with 6′ bike lanes and 7′ parking lanes, or additional traffic lanes with bike “sharrows” (which are stupid, ridiculous, and dangerous). This is the choice between road diets, slowing traffic, and providing some space for different users and modes of transportation, and just repaving Gravois. MoDOT favors Option 1 in both cases.

What is the situation?
In 2016, MoDOT has set aside funding to update signals along Route 30 (Gravois Avenue) and resurface the roadway to repair and rejuvenate the failing pavement. During the resurfacing and signal work, the department has the opportunity to make changes to the roadway striping and signals to better meet the needs of both residents and commuters along Gravois in the city. In addition, residents have expressed concern about vehicles traveling at excessive speeds along sections of Gravois, and requested a more inviting and safe environment for pedestrians and bicycles.

What is the current plan?
MoDOT will upgrade lighting and signals along Gravois at several intersections: Morgan Ford Road, Arsenal Street, Chippewa Street and Kingshighway Boulevard, Cherokee/Tennessee, Utah/Louisiana, Compton/Wyoming, Ohio/Lynch, California, Shenandoah/McNair, Russell and 12th/Geyer. MoDOT will also make pavement repairs and resurface Gravois between the city limits and I-44/Tucker. Since MoDOT is putting a new surface on the roadway, the department is also recommending reducing the number of lanes on two sections of Gravois – between Christy and Chippewa, and between Jefferson and I-55. The new striping plan would include bicycle lanes along parts of Gravois, to meet the Bike St. Louis plan and the city’s sustainability goals. Another option is to leave the striping as it is, but that would not address safety improvements, no accessibility for bicycles or pedestrians.

Will any roadways be closed?
Early on, engineers proposed closing some access along Gravois to reduce the number of roads at intersections. There will be no roadways closed as part of the current plans for Gravois Avenue.

Why will a road diet help?
Along Gravois, MoDOT has looked at the traffic volumes and speeds and determined a road diet would be effective in two places:
Between Christy and Chippewa, where the roadway would go from four lanes to three lanes, and
Between Jefferson and I-55, where the roadway would be reduced from six lanes to five lanes.
MoDOT has studied the area and believes a road diet will lower traffic speeds and will increase the accessibility for cyclists and pedestrians.

Will Metro busses block the roadway in the areas with three lanes?
They shouldn’t. Bus stops are identified. Bus stops are signed as no parking zones.

Can more be done?
There has been continuing discussion with the Greater Gravois Initiative and the City of St. Louis for further improvements along Gravois. MoDOT has no funding identified for further work along Gravois in the city for the foreseeable future.