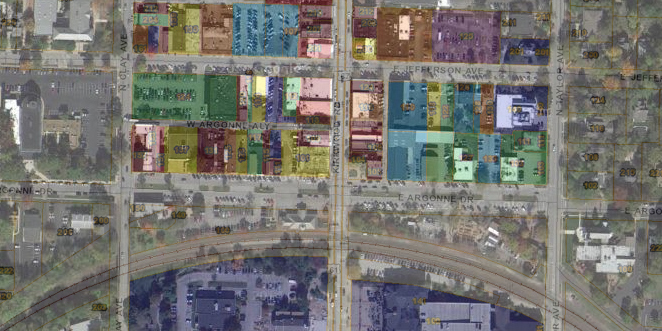 Let’s continue our tour of the region. We saw how on West Florissant the hopelessly low-productivity development pattern sucks wealth away from individuals and the city of Ferguson. Maplewood’s traditional downtown is much more productive. We saw in Crestwood despite much higher median household incomes, its auto-oriented commercial corridor on Watson was lower-yielding than Maplewood’s- a hidden tax on its citizens (and the county/region as a whole). Next let’s take a look at Kirkwood. Let’s do the math! 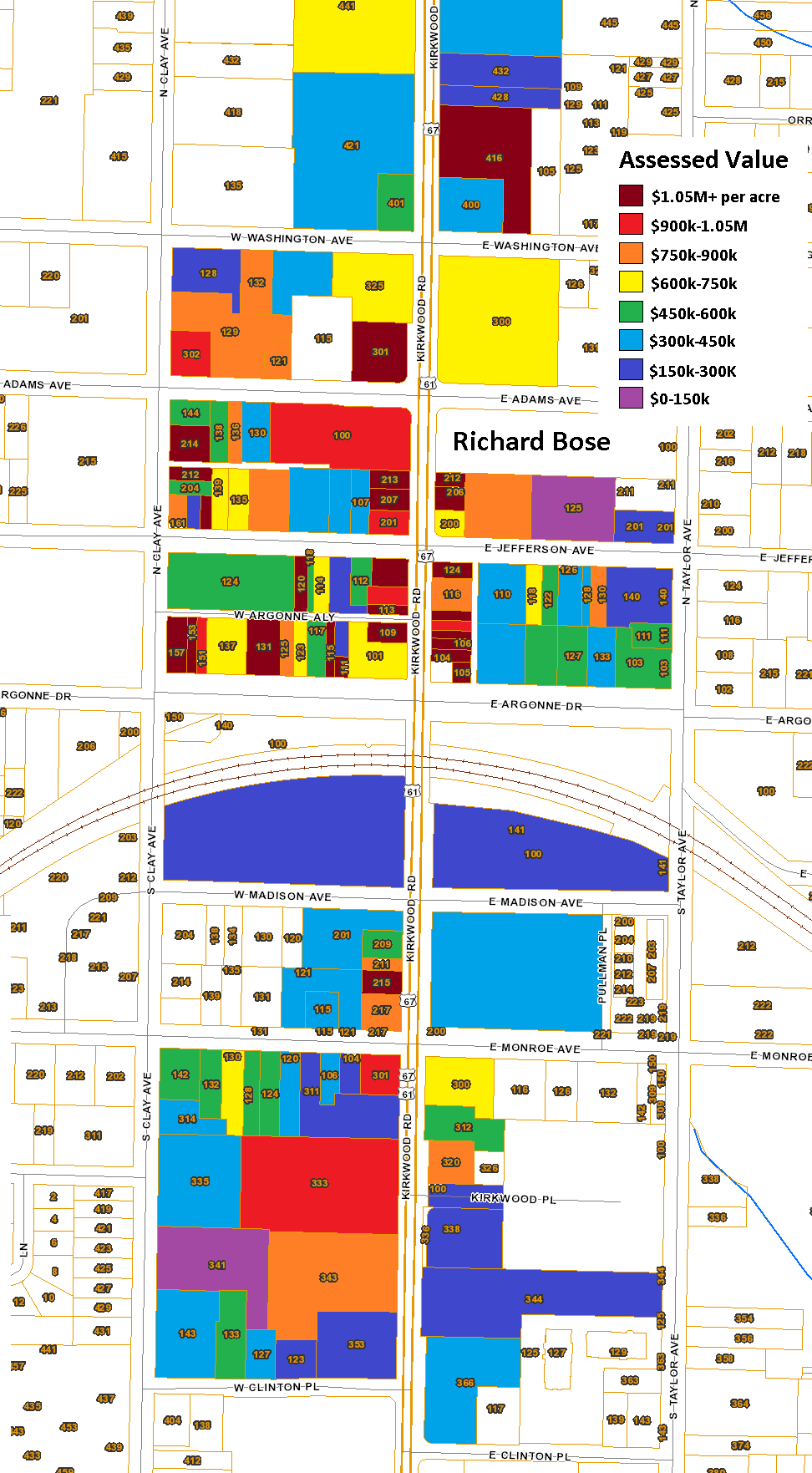 {Downtown Kirkwood along Kirkwood Rd (Elsewhere known as Lindbergh). The Amtrak station is in the center.}

Kirkwood is a rock star. Several parcels go well beyond the top of the scale. The study area covers 55.77 acres with total assessed value of $30.7M or $550,000 per acre. That’s 67% higher than Maplewood, 182% higher than Crestwood, and 437% higher than West Florissant. Kirkwood’s median household income is also the highest of the four study areas, but as we saw in Maplewood, whose median household income is 55% less than Kirkwood’s, that’s not what is driving value in their commercial corridors. Those incomes are further buoyed by lower transportation costs since downtown is a very short drive/bike/walk from surrounding residential areas. 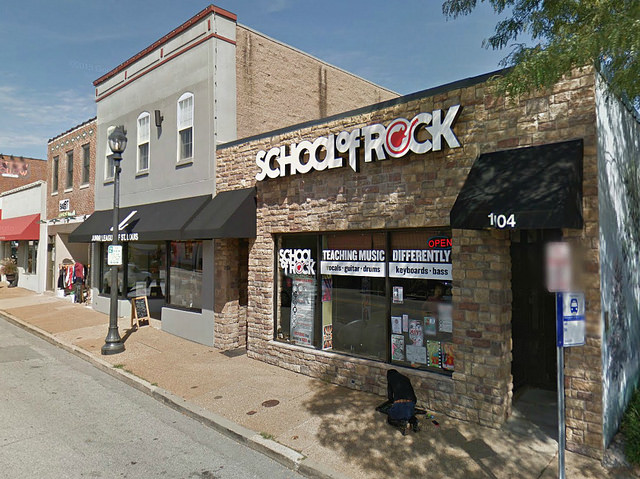 {Some of Kirkwood’s most productive buildings. The modest building in the center clocks in at $2.58M in assessed value per acre.}

Kirkwood is blessed with a street grid and a traditionally built downtown thanks to its ancestors. Without market perturbing policies from the regional, state, and federal governments, they had to build a place that was productive and resilient which turns out to be a human-scaled efficient-land-using one. Luckily for them it hasn’t all been torn down.

As Kirkwood considers what to do with the land at Manchester and Kirkwood Roads, they should examine which land uses are productive and wealth generating just down the street. 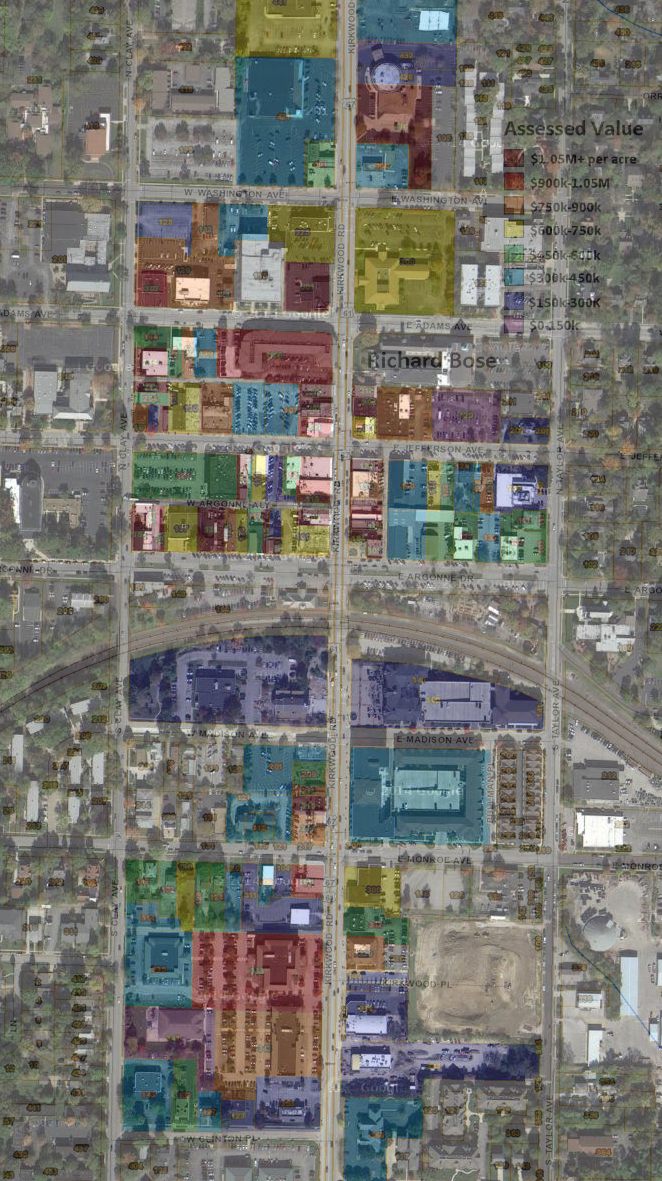 {Some of the least productive parcels have a lot of parking}

What about sales taxes? An obvious question. The Walmart Supercenter down the road comes in at $252,179 of assessed value per acre. Let’s set the rock star bar at $1.2M per acre. At 1.114 (0.654 general + 0.46 SBD) per $100 assessed value for general revenue property taxes it would need to generate $10,558 per acre in sales taxes or at 1.25% for general revenue sales taxes that’s $844,700 per acre or $11.3M for the site, which it probably does. But those rock star sites downtown generate sales taxes as well, so the big box has to match that too. And the kicker here is that the Walmart is in the Meacham Park section of Kirkwood. Annexed in 1991 this part of Kirkwood is in the sales tax pool. The pooled taxes are redistributed per capita so for this section of Kirkwood only 6.4% of the 1% sales tax revenue goes to Kirkwood. We see why some cities want out of the pool. Kirkwood has the 0.50% Capital Improvement and 0.50% Parks/Recreation Capital Improvement optional sales taxes. But again those apply to downtown too. Without more data a comparison isn’t possible, but assuming the big box outpaces downtown due to sales taxes isn’t a good bet.

Kirkwood is a wealthy place thanks in part to its wealth generating downtown. Each year it throws off considerably more property taxes per acre than the other places we’ve examined, which translates into less infrastructure to maintain per dollar of economic activity. The city (and school district, etc) can plow it back into making Kirkwood a better place to live. A positive feedback loop that everyone in the region should strive for.