If all goes according to plan for local developer Richard Robinson of First & Main Properties, a corner lot at 2350 S. Grand Blvd. (at Sidney St.), across from Tower Grove Park and Always Low Prices grocery store would be purchased and redeveloped by Robinson, and leased to Starbucks with a potential opening in summer 2015. Currently, the lot holds a vacant single story mid-century building set back from Grand and Sidney.

The plan calls for a rectangular-shaped building with drive-thru to be built along the north side of the property; the drive thru lane would extend the length of the east side of the property. 16 parking spaces and 3 road cut-outs would complete the lot surface, along with ornamental shrubbery and a bike rack north of the drive thru. A 24-foot high corner facade and historically appropriate brick and wrought iron would adorn the building. 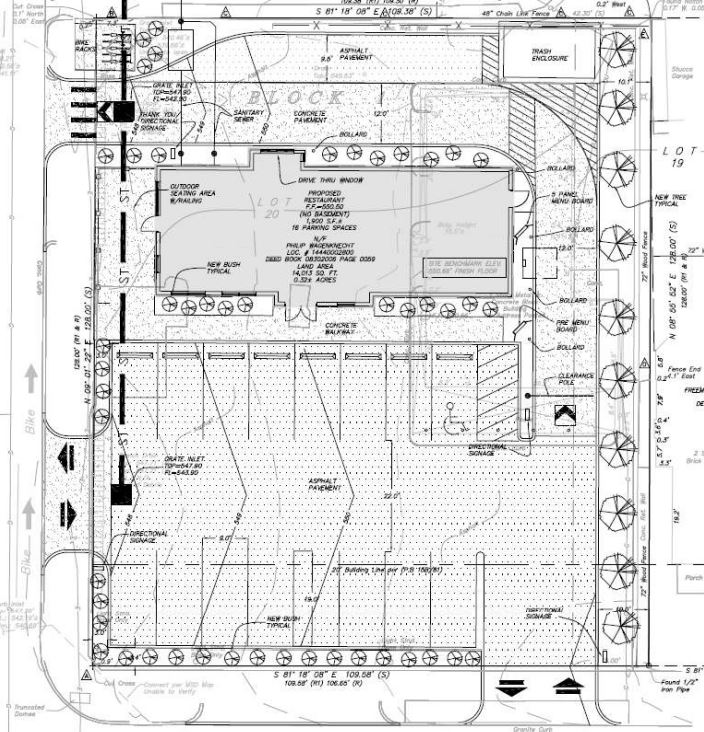 Robinson presented his plans at a Tower Grove East community meeting Tuesday, August 19, where 8th Ward Alderman Stephen Conway, members of the Tower Grove East Neighborhood Association board and several community members were in attendance. Robinson is scheduled to present to the City of St. Louis Preservation Board at its August 25 meeting. The city’s Cultural Resources Office is recommending that the Preservation Board vote in favor of the proposal.

Community proponents of the project say the development would increase local property values, ameliorate crime and vagrancy on a problem property, add a convenient option for coffee-drinking commuters, and is the best option presented for this site. Many support the project moving forward as presented. 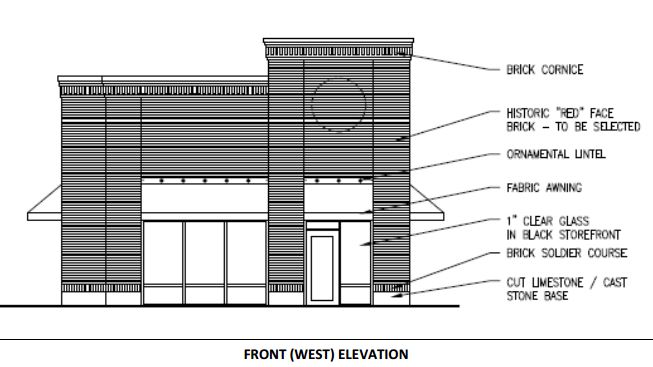 Community critics cite limited pedestrian and cyclist access; increased traffic and trash; exhaust pollutants produced by engine idling at the drive-thru and their impact on neighboring families; and the suburban fast-food nature of this development as aspects of the project that need to be addressed before receiving neighborhood support and/or approval.

Reports regarding the need for chemical remediation due to the sites use as a dry-cleaner and gas station were still pending. No traffic impact study has been conducted. No alternative mock-ups for the parcel were presented at the community meeting, but additional details are available in the Preservation Board agenda (below). Robinson told meeting attendees that engineers for the project saw no other ways to situate the building. Engineers for the project were not present.

This lot has been the target of a number of failed development proposals, most recent of which was an unpopular plan to develop the property into a free-standing Domino’s Pizza (the Domino’s at Grand and Arsenal would relocate) with a small fleet of delivery vehicles.

Despite pass misses, the site remains attractive due to its location. Information available on the First & Main Properties site shows an average household income of more than $56K within a mile of the site. Traffic data show a northbound (easiest access to the site) 7am peak of roughly 1,200 vehicles an hour. The southbound peak at 5pm registers a similar number.

The developer has worked on Brentwood Square, Brentwood, and Olde Towne Plaza in Ballwin, MO. He also was a partner in the now defunct developer group, Sappington Square LLC, which developed Sappington Square, Crestwood in 2008, whose tenants also included a Starbucks.

City of St. Louis Preservation Board final agenda 8-25-14 by nextSTL.com

Mark Beirn is a doctoral student in urban history, and divides his time between St. Louis, New Orleans, Chicago and Berlin. He recently returned from a residency at the Center for Metropolitan Studies, where he was researching the development of Berlin's airports and dog-friendly subway system.